I'd like to think coverage of F1 has moved on considerably from the days of Imola 1994.


Well it has. I think 1994 was back in the days when the 'local' broadcaster provided the bulk of the actual pictures for the world feed, and some were more 'sensitive' than others. Today F1 are in total editorial control.

It was the mid to late 2000s before FOM took over all host broadcast responsibilities (it happened gradually over several seasons). Although from the late 90s until the end of the 2002 season they had their own host broadcast operation for the Digital PPV coverage. (Only seen in the UK on Sky in its final season as ‘F1 Digital+‘)

It wasn’t just the way accidents that covered that differed. The poorer local broadcasters would either just follow the leader and / or the driver(s) of local interest, missing everything else. Some - RTL in Germany, Fuji TV in Japan, the BBC and ITV - were some of the best.

When Michael Schumacher had a big accident at the British Grand Prix in 1999 ITV kept the helicopter well back. They were helped by the fact that Schumacher’s extraction from the car was covered up by a large sheet that was held up.

As Neil Jones has said the approach now is not to show any replays until it’s clear the driver is OK.

The BBC were very fortunate - if that’s the right term to use - at Imola in 1994. It was one of the first overseas races they’d sent a presentation team to. They hadn’t been taking qualifying live, but saw the graphic pictures RAI had shown after Roland Ratzenburger’s accident. Steve Rider has said that, after what they saw, there was a discussion on what they should do if there was an incident during the race. When Senna crashed they were ready to cut away to their camera in the pit lane and did so to avoid the most graphic images being broadcast. (I believe some of them did end up getting shown, but not to the extent that viewers of other broadcasters saw them.

RAI were - and still are - notorious for dwelling on graphic images of incidents. A few years after Senna died there was an incident at another Grand Prix in Italy. A marshal was hit - and very sadly killed - by a tyre that came loose after a car went off. RAI stayed on graphic images from the helicopter of the marshal being treated. I think that by that point the broadcast contracts stipulated you couldn’t - commercial breaks aside - cut away from coverage between the FOM sting and the end of the podium ceremony. So those pictures did get shown live on ITV.

It’s also happened more recently, with graphic images being shown by the host broadcaster when a rider was killed at the Giro d’Italia.
Last edited by UKnews on 29 November 2020 9:17pm - 2 times in total

Heart attack.
Looks like it isn't that simple. The police have raided his doctor's home and clinic. Negligent manslaughter?
https://www.bbc.co.uk/news/world-latin-america-55123188
BR
Brekkie Wales Wales Today 29 November 2020 9:39pm
Reminiscent of the Michael Jackson situation. BTW any ratings for the documentary film C4 showed last night.
Be nicer and more tolerant to each other. Them's the rules.

I am so happy to hear that the halo has saved his life from this incident. Well done to the people involved from the FIA & FOM to put it into the car. You have actually saved someone's life of a F1 driver, or in other words an actual human being, out there in the car & many more of them in future from being potentially killed by putting it into the car. That takes a lot of guts & bravery to do that for all of your drivers out there on the track. Fair play.

If anyone wants to go into this sport as a career in the future. They would really want to think long & hard from it. If they wanted to take the helm of these machines if they want to win trophies & world titles for their potential F1 teams in future. They should look at the potential dangers of it from taking it up during their young lives. That crash in Bahrain from Grosjean & car tipping over for Stroll from that one race earlier today should be looked as some of the incidents in how to never crash a car in F1. It could change their lives in a huge way if they get hit in an unexpected incident like that while not complying with the rules while out on the track.

Now I know that halo from Roman's car had offficially saved his life in that horrifying accident however the look of shock & disbelief on my face when I watched that huge fireball billowing up into the air from that accident was something else on another level. It left me completely speechless. I have never seen anything like that happen in F1 for several years. I am glad to know that these incidents in F1 are extremely rare but it should never happen again. It's a blessing that Roman Grosjean's fans will visibly relieved in hearing that he is doing well apart from a few burns on the hands & on his ankles.

And after watching the incident on Channel 4; I just want to say that Steve Jones, Ben Edwards, David Coulthard & Mark Webber all did an exemplary job in reporting & giving analysis on Grosjean's crash in Bahrain earlier tonight under their circumstances of having the race highlights only. It was no easy job to do it as the incident did happen quite suddenly for the viewers especially for those who were watching this race live through various Sports TV channels from around the world. I had a read of two other F1 threads online from sites based in Ireland & the U.S. about this horrific crash tonight. The people who responded to it were all equally in shock & horror.

Some of them were saying that they had never seen anything quite like it in this sport before & never want to see that happen again.

An update from Romain himself. Pleased to see you’re in good spirits! We hope you make a speedy recovery 🙏 pic.twitter.com/njnjjH4GBi

And would you look at this. He sent a message to say that he is fine & in very good spirits while he having his stay in hospital. F1 fans who watch this sport around the globe are probably just so relieved to hear that he is well & doing OK from his horrific ordeal.

thegeek Founding member London London 30 November 2020 6:46am
Did anyone spot the slightly different look for the BBC's NFL show this week?

I hope you’re ready for a packed #NFLShow Thanksgiving Special tonight.
We have @OsiUmenyiora @JasonBell33 some brilliant footage and the biggest telly you’ve ever seen.
Join us at 23:30 on BBC1 or on the @BBCiPlayer @NFLUK pic.twitter.com/Pq9bYJJbuZ

I believe it’s a Whisper production which Timeline facilitate.
HC
Hatton Cross Central (West) Midlands Today 30 November 2020 10:07am
tightrope78 posted:
Am i right in thinking that the Monaco Grand Prix remains the only one still produced by the host broadcaster (Tele Monte Carlo)?

Correct. I got talking to an FOM cameraman at Silverstone about 6ish years ago - there was break in the support races and he looked bored, unable to move from his position half way down the Hangar Straight, and naturally I started talking F1 TV 'shop' with him, using the knowledge of F1 television broadcasts, and he was happy to natter for a while.

I asked about Monaco, and it was (is) a constant source of irritation to FOM. I assume Liberty may have changed the terms of the contract, but back in the last couple of years of the Ecclestone run era. the local race rights holder could either get FOM Tv produce the world feed race coverage (with new races to the calendar, this was manaditory) or for a fee, pay FOM and then become the world feed race coverage producer - graphics and replays were still under the control of FOM.

The fee to be a world feed broadcaster was so high (we were talking well over £6 million back then) that most rights holder broadcasters with races in the country, were happy to let FOM do the coverage. TMC though, had plenty of money and were happy to pay whatever it cost.
Readers are warned that this post contains some flash photography
NG
noggin Founding member 30 November 2020 11:59am
Brekkie posted:
In the main BT studio then. Do BT produce this for them?


It's the main studio used by BT Sport that Timeline operate. BT use a lot of Indies to produce their own content - though I think some is in house - and it's unlikely BT would produce content for the BBC (unless it was a shared show)

AIUI the BBC NFL Show continues to be produced by Whisper TV (who have a strong relationship with Timeline through their Channel 4 F1, SailGP etc. productions) I think previously the show came from a smaller studio at Timeline/BT's Stratford studios - but I guess social distancing (both in front and behind the camera) means using the larger studio makes sense at the moment?

thegeek Founding member London London 30 November 2020 1:02pm
The BBC's NFL show has mostly come from studio 3, but it's occasionally moved (with curved backdrop) to 1 or 2 when 3 has been in use for other programmes, as it is at the moment. I'm not sure if this week's change of scene was for stylistic reasons or because there wasn't time to set and strike the curve between other programmes. 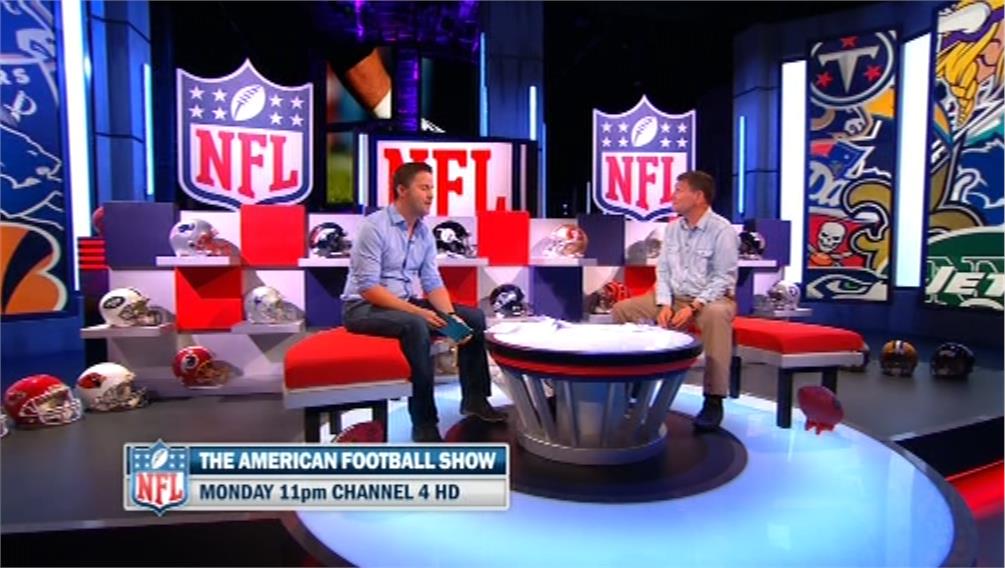