Why create a new thread when one is active serving the same purpose? It doesn't matter how old it is, surely?

JAS84 Yorkshire Look North (E.Yorks & Lincs) 15 September 2019 11:38am
Yeah, and if a new thread WAS made, I could see the moderators just merging it into this one! The usual reason to make a new thread for a subject that already has one is if the old one is locked.
:-(
A former member 15 September 2019 12:38pm
Sky comedy get spilt from here. I just wish Sky one 2017 rebrand got a spilt.
CR
Critique Anglia (East) Look East 15 September 2019 5:53pm
Always nice to waste a page of a thread calling for the splitting of a thread that had already been split!
623058: it just seems like your an mp3 whore

ST
Stuart West Country (West) Spotlight 15 October 2019 4:07am
My Sky+HD STB (DRX890) updated last night to new software R022.090.25.00P. They are continuing to slowly morph the older STBs into the same style as Sky Q. Presumably this makes things much easier for the future if it is actually the same software.

Getting the 'Q' treatment this time were the Catch-up and Box Office sub-sections. Cinema, Kids, Sports and Box Sets had already been changed in previous updates. This leaves only the 'Planner' section to be changed. 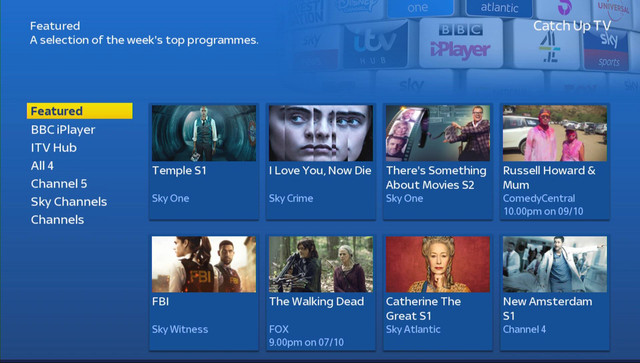 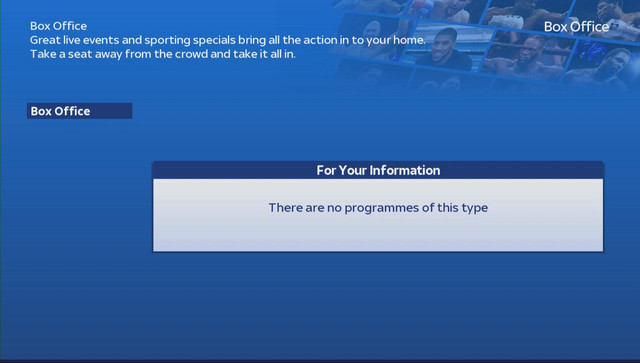 Last edited by Stuart on 15 October 2019 4:15am
NJ
Neil Jones Founding member Central (West) Midlands Today 15 October 2019 8:32am
Mine did the R022 update as well, but I get the impression that the SkyHD boxes occasionally struggle with the animations when moving down, its like it can't quite cope. This might have more to do with the fact they are old boxes now technology wise, must be the best part of 10 years old now?

I don't think its the same "software" being an entirely different hardware platform, I suppose the intent is to unify the two interfaces as close as possible so when one migrates from Sky+HD to SkyQ, it won't come as a massive shock.
KU
Kunst World News 17 October 2019 4:30pm
Will and Grace now also airing on Comedy Central

I don't get it , wasn't Sky Comedy the place where one would be able to see the show's repeats?
PL
Plektrum Central (East) East Midlands Today 17 October 2019 4:47pm
Kunst posted:
Will and Grace now also airing on Comedy Central

I don't get it , wasn't Sky Comedy the place where one would be able to see the show's repeats?


Can’t be sure but didn’t Viacom/Channel 5 have recent rights to the show when the reboot premiered?

It’s entirely possible they’re just exploiting the rights as much as possible until their deal ends. Amazon had the streaming rights and they recently expired so I would expect those to make their way to Sky as well.

PFMC84 UTV Newsline 18 October 2019 8:31am
I was watching Seasons 1-8 of W&G on Amazon Prime, over the past few months. Was great to see that they actually got the widescreen copies of the show from S3 onwards and that Season 8 was in HD too. Some episodes randomly were in 4:3 through S3-6, so hopefully that has been corrected if it is now to be shown on a different channel.