Premier League Coverage PPV and beyond

All matches televised until end Feb 2021

PL looking at rescheduling evening weekday matches during Jan and Feb to a new KO pattern of 1530, 1730, 1930 to bring some teams travel plans forward during the day and avoid fixture duplications within the same timeslot during LD3. We'll see.

The match between Aston Villa and Tottenham Hotspur, due to be played at Villa Park on Wednesday 13 January, has been rescheduled following a decision by the Premier League Board.

Following Villa's request to rearrange the fixture, and due to the number of players and staff who have either tested positive for COVID-19 or have been placed in isolation by the club, the Premier League had no other option than to reschedule the match.

With the health of players and staff the priority, the League continues to work with Villa on measures to ensure their League season resumes safely and at the earliest opportunity.

The Premier League wishes those with COVID-19 a full and swift recovery and will rearrange Villa's match against Spurs as soon as possible.

As a result of this rescheduling, Spurs will now play their home match against Fulham in its place, on Wednesday 13 January at 20:15 GMT, live on Amazon Prime Video in the UK . The fixture was previously postponed on 30 December.

With Fulham playing on Wednesday 13 January, their home fixture against Chelsea will be moved from Friday 15 January to Saturday 16 January at 17:30 GMT , and will remain live on Sky Sports in the UK.

Everton's match at Villa will be rescheduled from Saturday 16 January 17:30 GMT to Sunday 17 January 12:00 GMT, and will remain live on Sky Sports in the UK.

dvboy Central (West) Midlands Today 11 January 2021 8:50pm
Nice to see they've properly thought about it, and with no fans to consider it makes absolute sense to get the matches rescheduled where they have the opportunity.
Tennis on telly | Hello, good evening, and remain indoors.

This is a result of the FACR3 - Southampton vs Shrewsbury match pp due C19 last weekend, now scheduled for next Tuesday 19th, originally scheduled match was a BT Sport pick on BTSX. No broadcast arrangementsas yet for the rearranged match.

DVB Cornwall West Country (West) Spotlight 20 January 2021 2:07pm
All matches until the end of February to be shown as previously, notable the BBC mentioned, fixture lists and allocations later today

HC
Hatton Cross Central (West) Midlands Today 20 January 2021 2:48pm
Have the PL given details about how the all the games are being divvied up between BBC, BT, Sky and APV?

I'd take it that once the existing contract package (Sat 12.45/Sun 4.30 etc) picks from Sky and BT have been chosen and allocated, the 'other' Saturday 3pm games are then allocated out with Sky and BT getting first choice option of the extra games, and whatever left is offered to whoever wants them?
Readers are warned that this post contains some flash photography

We're promised 1 and 2 later today, 3 to follow in due course. 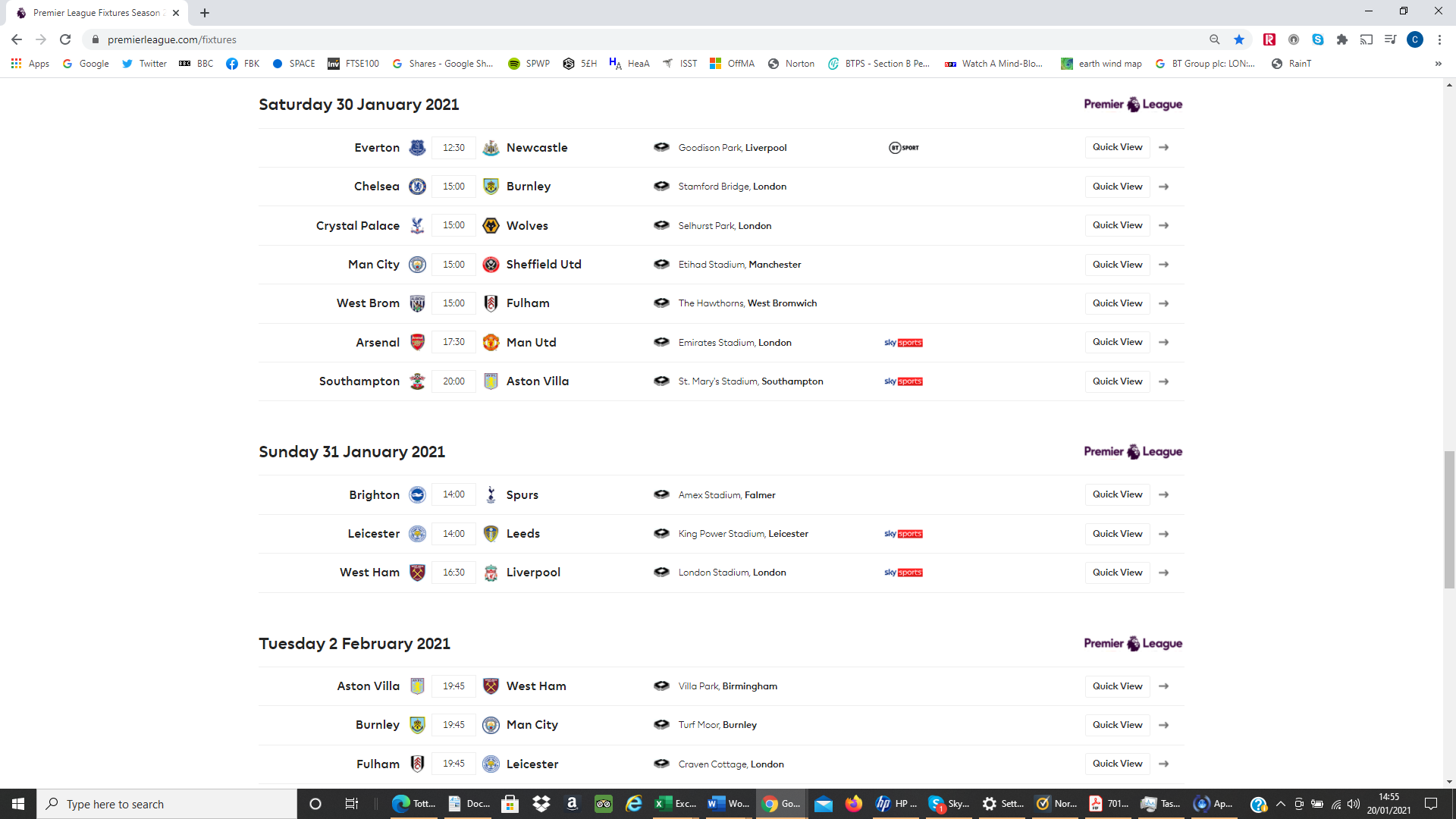 Last edited by DVB Cornwall on 20 January 2021 2:57pm
BR
Brekkie Wales Wales Today 20 January 2021 3:34pm
Did we ever get any more figures for the update of the PPV games?
Be nicer and more tolerant to each other. Them's the rules.

DVB Cornwall West Country (West) Spotlight 21 January 2021 7:20pm
Further to this, there are currently 20 matches to allocate over four weekends.

I'd suggest the split is likely to be 12/13* Sky - 6/7* BT - 2/0* AZPV. (*Unless as I speculated earlier AZPV have called stumps on Football for now), I really can't see the BBC getting another match in February.

The real breaker for this coverage would be extreme bad weather which really would impact this schedule seriously.
TV
iloveTV1 London London 24 January 2021 5:08pm
Do we know when the rest of the matches for February will be allocated a broadcaster?
Joined on 29th December 2019.