This site closed in March 2021 and is now a read-only archive
Previous Next
SE
Square Eyes Founding member 10 August 2019 1:46pm
I'm not keen. As can often be the case with VR it seems they've gone over the top to create this vast illusion of space. There is no need for that chasm between the sofa area and the 'Welcome Back' screen.

The best use of VR I think is when it's used for compact spaces. Like they did with the World Cup studio and the ITV News studio.
JO
Jon 10 August 2019 1:55pm
I’m not a massive fan of the sofa. The ‘telly chairs’ looked a lot slicker. That’s not say they won’t appear on Match of the Day. But I think the sofa probably helps them with the effect.
DE
denton 10 August 2019 2:28pm
I'm all for AR, it can be really useful in cleverly presenting facts and figures, etc... but I have yet to see a VR set that I actually like. I think one of the big problems is when they're created by graphic designers with no experience of, or talent for, set design.
NG
noggin Founding member 10 August 2019 2:32pm
Jon posted:
I think it’s missing any animation in the backdrop.


The clouds in the sky animate.
JO
Jon 10 August 2019 2:35pm
That might be a bit too subtle. You had really dynamic animated backdrops with the last set, not sure why that can’t be replicated.
JO
Jon 10 August 2019 2:38pm
Jon posted:
I’m not a massive fan of the sofa. The ‘telly chairs’ looked a lot slicker. That’s not say they won’t appear on Match of the Day. But I think the sofa probably helps them with the effect.

Personally not a big fan of the constantly moving camera shot from the jib. Yes it shows the studio off, but for me it's distracting.
DV
DVB Cornwall 10 August 2019 3:06pm 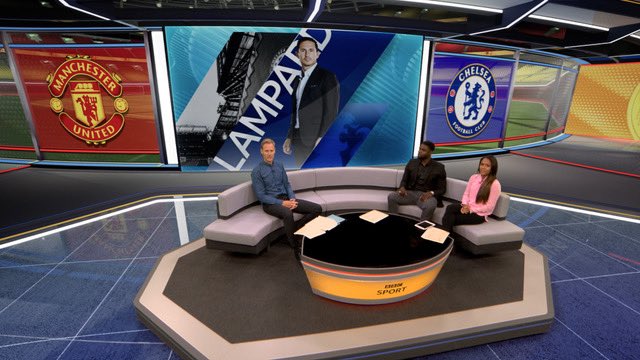 (Dan Walker on Twitter)
BR
Brekkie 10 August 2019 3:14pm
Joe posted:
One initial impression – if the intention is to appear to be in a stadium, then it’s a shame that stadium is empty on match day. Not that they should people in, but maybe something more abstract would not give the same odd feel.

Not sure if the occassionally seen ITV Sport studio is virtual (I'd assume so) but they have a similar idea executed better IMO. Great use though of a small space by the BBC - not perfect but better than most previous efforts.
JO
Jon 10 August 2019 3:23pm
I’m pretty sure the ITV Sport set isn’t virtual and uses screens that may be rear projection.

I think the BBC set is a bit more interesting and ultimately there is more they can do with it even if it’s not quite right yet.
Last edited by Jon on 10 August 2019 3:48pm - 4 times in total
AG
AxG 10 August 2019 4:10pm
The BBC Sport logo on the desk bugs me, the colour needs adjusting especially when you've got the BBC Sport logo 'yellow' on the graphics.
BR
Brekkie 10 August 2019 5:15pm
Mark Clemmit barely raising his eyes from his tablets during his bit. He used to have a touchscreen TV which actually worked quite well and didn't feel like the gimmick it sometimes can.

Have Football Focus and Final Score both had new titles?