Here is the April opening in 1994
https://www.youtube.com/watch?v=0C-KMy5g6Jw

:-(
A former member 10 May 2016 9:32pm
Whataday posted:
There were no other titles in between (and the 93 ident was still used alongside the Eamonn and Anthea titles)


Just to make sure we singing off the same page, The Eamonn and Anthea titles did come in around September 1994? ( this would also be the time when Sunday best was dropped and Sunday programme come along)

Of course the music did not change but how long until the 93 ident was updated to no longer be 3D? after the titles come in?

Whataday posted:
In April 96 they were still using the old ident:


Of course the music never changed until Late summer 1996.
WH
Whataday Founding member 10 May 2016 9:35pm
I'm not sure when the Anthea/Eamonn titles came into use.

With regards to the ident with the navy background, in the promo at the start of this clip there is a very close likeness to the late 96 logo, suggesting it was in use.

However, GMTV was never really known for consistency when it came to introducing new graphics packages. Didn't the GMTV2 ident feature the new 2000 logo way before it was introduced?
:-(
A former member 10 May 2016 9:57pm
The Dark blue look was deffo in use during August 1996 The last day for Halfway Across The Galaxy And Turn Left was Thursday, 29 August. you can see the endcap.


Here is a strange clip from Jan 96 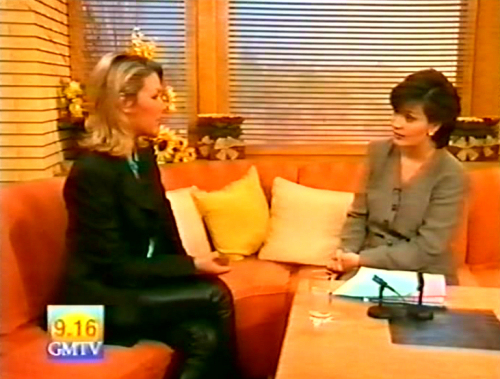