This site closed in March 2021 and is now a read-only archive
Previous Next
DV
DVB Cornwall 18 March 2020 8:43pm
There'll be replacement SONGS at least. The EBU have declared that the entries for this year cannot be carried forward, the ARTISTS can be reappointed or reselected though, together with new 2021 songs. I feel that the larger selection processes will start from scratch but the smaller countries will go for the 2020 entrant with new songs.
RD
RDJ 18 March 2020 8:49pm
Josiah. posted:
Also, I have heard rumours that they are trying to expand the eligibility of this year's songs to next year's contest.


You can’t compete with songs that are already by then a year old. It just won’t work.

Neither will it work in tying down the artists to have to compete in 2021. People that have performed one year are already able to perform the next year should they wish to, Lena for example in 2011. I suspect James Newman will want to progress on with his career for the next year rather than committing even further time to Eurovision this time next year.

I think the songs that were put forward this year will just have to be effectively null and void and a new selection process in place for 2021.
DV
DVB Cornwall 18 March 2020 10:09pm
Rotterdam City have reportedly declared their interest in holding the 2021 event in the City. I'd be staggered if it was moved elsewhere if the reported announcement is correct.
GO
gottago 18 March 2020 10:15pm
RDJ posted:
Josiah. posted:
Also, I have heard rumours that they are trying to expand the eligibility of this year's songs to next year's contest.


You can’t compete with songs that are already by then a year old. It just won’t work.

Where is this EBU decision? The Eurovision FAQs page says no decision on this has been made.

I disagree that the songs would feel stale. And I think choosing a new song should wholly depends on a country by country basis. I appreciate pre-Eurovision airplay is a thing in some countries but in a lot of countries its not and expect the majority of viewers won't have ever heard the songs before they're performed at the contest. There's been plenty of occasions where songs have been selected or released 6, 7, even 8 months before the contest. I just don't really think it's that big an issue.
RW
Robert Williams Founding member 19 March 2020 9:10am
Even as a Eurovision fan I prefer to not to have heard any of the songs, other than the home entry, before the semi-finals - I find it much more enjoyable to have no clue about what is coming up.
DV
DVB Cornwall 20 March 2020 7:50pm
Confirmation that this year's SONGS will not be accepted as entries for 2021, from the EBU. 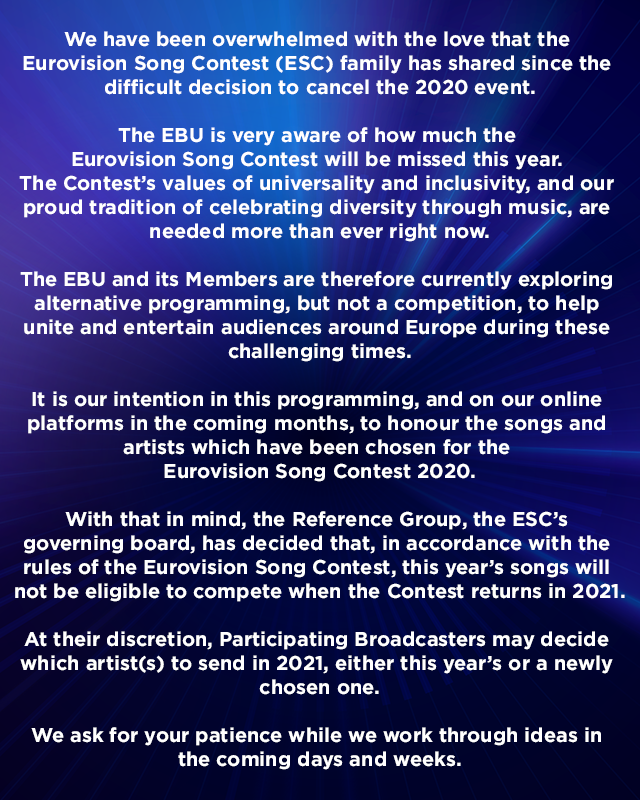 BBC announces a range of programmes that will bring the nation together and provide great British entertainment during these difficult times, feat: @TheGNShow, @PeterCrouch, @haveigotnews, @THEVIVIENNEUK, #TheMashReport and more: https://t.co/qiYP5EqmNr pic.twitter.com/zr1gPtGlWh

Produced by BBC Studios the show will feature classic Eurovision performances, a look at what would have been in 2020 and entertaining interviews , including this year’s UK entry James Newman.

Eurovision: Come Together will be produced by BBC Studios for BBC One.
BH
BillyH Founding member 24 March 2020 4:15pm
Looking forward to seeing some rare clips that never get shown on TV, like Bucks Fizz and Brotherhood of Man.
HC
Hatton Cross 24 March 2020 4:26pm
See what you did there. Very good

Hope this programme shows the wonderful de-construction of the entire contest, as seen in the Interval act in Oslo in 2016. Just brilliant.
Sir Terry would have been proud of our Swedish friends.
DW
DavidWhitfield 31 March 2020 4:14pm
New today:
https://eurovision.tv/story/eurovision-europe-shine-a-light-will-bring-audiences-together-on-16-may