"Biggest education offer in it's history" 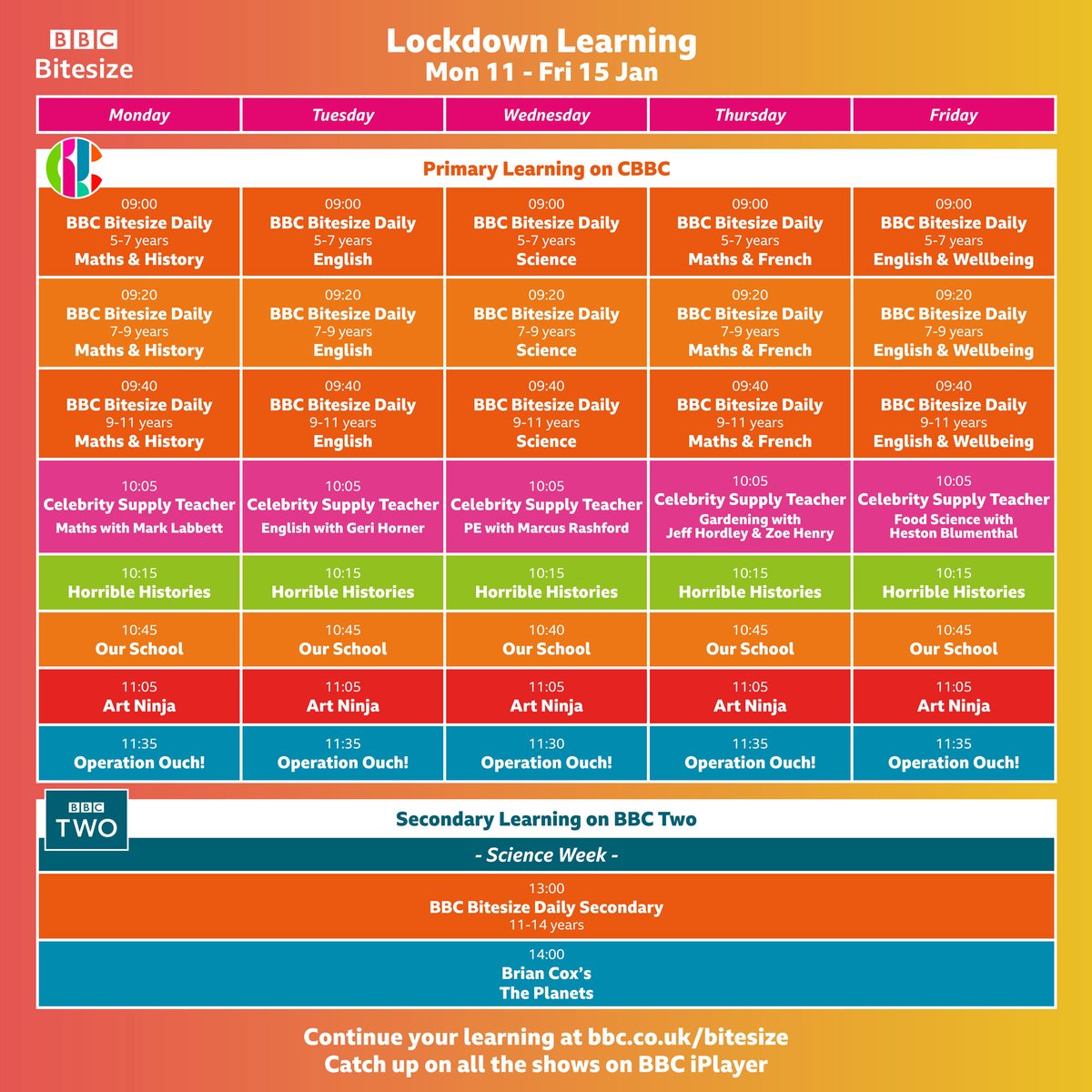 
So was Tracy Beaker for a bit

Celebrity fitness guru Joe Wicks starts the series at 7.50am on BBC One followed throughout the week by Mr Motivator [amongst others].

Morning Live returns to BBC One at 9.15am on 25 January, where presenters Gethin Jones and Kym Marsh will be joined each day by a Strictly Come Dancing professional who will bring a bit of sparkle to the nation’s fitness regimes.

TV and radio presenter Mark Wright will bring fitness to secondary kids as he leads a daily dose of energising fitness sessions on BBC Two, iPlayer and other platforms from 25 January on weekday mornings.

Worth pointing out that the BBC Two offering is only two hours worth at 1pm with it not being shown at all next Thursday and Friday because of the snooker. The BBC News simulcast still looks to be going ahead, even though they could easily move the programmes to that slot and avoid the cancellation.

OK, the Beast is a maths teacher when he's not a Chaser, so Mark Labbett doing maths makes sense. And they have a chef doing food science and a footballer doing PE, those make sense. But English with a Spice Girl and gardening with two Emmerdale actors?
JO
Joe 8 January 2021 6:17pm
Why does it matter? I'm pretty sure the presenters aren't writing the scripts, let alone the national curriculum.
SP
Steve in Pudsey 8 January 2021 6:29pm
Apparently Geri Horner wrote a series of kids books.
TV
Tv2333 8 January 2021 6:34pm
Schedule Updated with the rest of science week on BBC Two.
https://www.bbc.co.uk/schedules/p00fzl97/2021/01/14
https://www.bbc.co.uk/schedules/p00fzl97/2021/01/15
NJ
Neil Jones Founding member 8 January 2021 8:14pm
To be honest the choice of presenters is relatively moot but have been chosen as they'll be well known. Probably won't be much different to the Bitesize series that went out overnight many years ago, and those were all voiced over/had interjections from people who probably didn't know much beyond the basics about what they were voicing. Its a bit like using a 10 year old actor in a movie set during WWII, he wouldn't know the first thing about what it was like in reality, as all the accounts and documentation about "real life" during that period are all second hand memories/stories, which tend to get embellished down the years but even then at the end of the day it's just a script in his head.

Of course back in the 80s and 90s we also had people presenting our "educational programmes" who knew what they were talking about, Art Attack wouldn't have been the success it was had Neil Buchanan not been able to draw for toffee, or if Johnny Ball didn't know the first thing about science...