Previous Next
JL
JamesLaverty1925 Central (East) East Midlands Today 1 December 2020 9:12pm
I think BBC One has backed itself into a corner with all the shows on Christmas Day. If they mix it up, moving Call the Midwife (just using it as the example), to Christmas Eve or Boxing Day will be seen as a demotion, and lead to some unwanted press speculation, so they have almost trapped themselves into having it on the big day itself year after year. 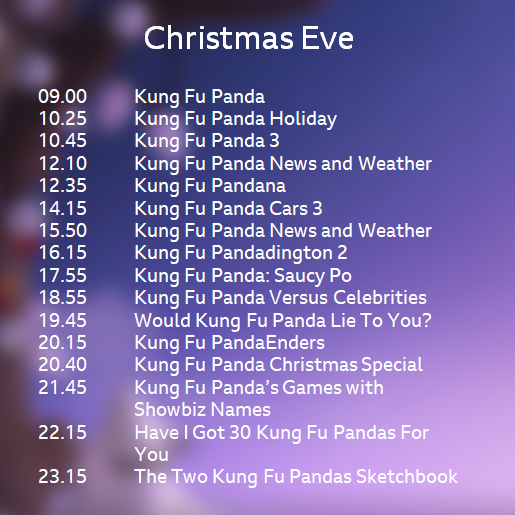 No we didn't, it was incomplete - there was a TBA block, now filled in with Tenable, YBF and the News - exactly as I predicted!

JAS84 posted:
JamesLaverty1925 posted:
Brekkie posted:
If they're basing their whole Christmas campaign around Zog and the Flying Dragons then I'd have thought it warranted a later slot than 2.35pm. I'd have it after the Queen or even after the film, bump the early evening schedule back half an hour and then as I said before I think Blankety Blank with Bradley would work later at night as an antidote to the annual misery fest that is EastEnders (and no plans for any Christmas cheer from them this year) before Mrs Brown's Boys, just stretching out primetime an extra half hour.

I'm guessing ITV is basically The Chase, Emmerdale, Corrie and BGT then, with probably another hour to fill. Would usually be POGDOGs.

I suspect that the TBAs there will be ITV News (15 mins), You've Been Framed (30 mins), and either Tenable or Tipping Point (60 mins).
BR
Brekkie Wales Wales Today 1 December 2020 10:19pm
Primetime has changed quite significantly too.
Be nicer and more tolerant to each other. Them's the rules.
JK
JKDerry UTV Newsline 1 December 2020 11:22pm
Well compared to the main US network schedules for Christmas Day, these ones look reasonable. NBC, CBS, ABC, Fox all give up by December 23rd, with virtually no Christmas specials of their shows at all on Christmas Eve or Christmas Day. Different culture and approach to Christmas television there, which could make its way here to Britain.

The American networks put all their effort in to their Christmas specials on the week leading up to Christmas. Of course, this helps in advertising revenue, but it leaves the main Christmas period void of anything decent.

Simply re runs, live sport, or Christmas movies and cartoons fills the network schedules on Christmas Eve and Christmas Day. So count ourselves lucky we have at least some Christmas programming, even though it is now dull and tired.
MA
Meridian AM Recently warned Meridian (South) South Today 1 December 2020 11:29pm
What happened to the Not Going Out special? Wasn't it supposed to be a New Year's Eve based story?

Or has Not Going Out been rebranded as the programme listed as Big New Year In?

JK
JKDerry UTV Newsline 1 December 2020 11:32pm
Meridian AM posted:
What happened to the Not Going Out special? Wasn't it supposed to be a New Year's Eve based story?

Or has Not Going Out been rebranded as the programme listed as Big New Year In?

It scheduled for Wednesday 30th December 2020 at 9pm
BR
Brekkie Wales Wales Today 2 December 2020 9:39am
Will be a Christmas Day special of Gavin and Stacey after all - on BBC Radio Wales.

BBC News - Gavin and Stacey Christmas Day show to air on BBC Radio Wales
https://www.bbc.co.uk/news/uk-wales-55152041
Be nicer and more tolerant to each other. Them's the rules.
TE
tellyblues North Reporting Scotland 3 December 2020 11:06am
BBC Scotland goes all repeats on Christmas Day. Suppose it's an alternative to soaps and celebs but Still Game is milked once again with the same episode that is shown only the day before!

And much to the annoyance of Matthew Harris, AKA Applemask, even this virus hasn't stopped them from calling it legendary... On the other hand, the people who complain when Santa isn't on the cover won't be doing so this year.

"What is two plus two?" "Rather more than three." "Yes, but can you be more specific?" "The Belgians."
JK
JKDerry UTV Newsline 3 December 2020 1:02pm
It has become very expensive now to own the Christmas Radio Times, the price always seems to rise, year on year. Never a price cut at all.

"Still, Christmas truly and genuinely wouldn't be the same without the Radio Times. Long may it continue. And human civilisation as well, of course."

The day it ceases printing will certainly be a sad one - and I'd argue it would be even sadder if this day came before the centenary in September 2023.
"What is two plus two?" "Rather more than three." "Yes, but can you be more specific?" "The Belgians."