This site closed in March 2021 and is now a read-only archive
Previous Next
JA
JAS84 10 December 2019 11:52am
Christmas TV guides are out... and I had to laugh at the one in The Sun on Sunday. Not only did they only include highlights and not full listings (saving that for the Saturday edition's TV Mag I guess), they also completely ignored Channel 5 and got all four of the other main channels' logos wrong! BBC One and Two were the original Gill Sans box logos from 2001-2 to 2006-7 - over a decade out of date! ITV was the five colour logo, replaced in January this year with a three colour version that they do correctly use on their daily TV listings page. Channel 4 used the All 4 logo. It would've only taken five minutes to look up the correct logos...

BR
Brekkie 10 December 2019 12:12pm
5 minutes looking up the logo is where they probably went wrong.

Picked up my Xmas guide last Friday, probably the earliest I ever have.
NJ
Neil Jones Founding member 10 December 2019 12:31pm
Well I suppose it was a good job they didn't google BBC Parliament previously, otherwise this could have ended up in the TV Guide: 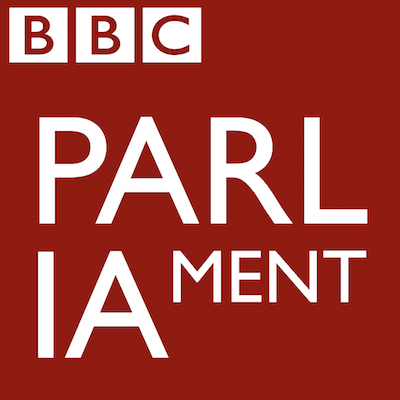 (with apologies to VMPhil who originally created this, and then Google decided for some reason that it was an official logo!)

GE
thegeek Founding member 24 December 2019 6:20am
STV are going down the traditional route this Hogmanay: http://www.stvplc.tv/blog/2019/12/bring-in-the-bells-with-sean-batty-this-hogmanay

The trailer for BBC [One] Scotland's effort makes it look like at least some of it will be prerecorded:
https://www.bbc.co.uk/programmes/p07yrp8w/player
NJ
Neil Jones Founding member 24 December 2019 4:01pm
Channel 4's annual tradition of The Snowman on or close to Christmas Day continues, still using the version that's introduced by David Bowie. Which is nice.

When was the last time they used the Mel Smith as Father Christmas introduction to this? I know there was another intro with Raymond Briggs but I don't think that's been seen on Channel 4 since David Bowie replaced it in was it 85?
NW
nwtv2003 24 December 2019 4:14pm
Neil Jones posted:
Channel 4's annual tradition of The Snowman on or close to Christmas Day continues, still using the version that's introduced by David Bowie. Which is nice.

When was the last time they used the Mel Smith as Father Christmas introduction to this? I know there was another intro with Raymond Briggs but I don't think that's been seen on Channel 4 since David Bowie replaced it in was it 85?

The Bowie introduction was recorded for when it was first shown in America, I’m not sure when Channel 4 began to adopt it.

It’s a shame they never show the film Grandpa anymore, as they showed that at Christmas for a few years in the early 1990s. Said film was made for TVS, the less said about that, the better.
JA
james-2001 24 December 2019 4:14pm
I've seen a recording of Channel 4 showing the Briggs version from, I think, 1988.

The Mel Smith version was cropped to 16:9, so it's a good thing they don't use it any more.
NJ
Neil Jones Founding member 24 December 2019 4:24pm
After I posted I found a Guardian article that was written in the wake of Bowie's passing in 2016, that the his introduction for The Snowman seems to date from 1984 as apparently it needed a sponsor or a big name, otherwise the US wouldn't "get it":
https://www.theguardian.com/music/2016/dec/22/how-the-snowman-melted-david-bowies-heart-raymond-briggs
AS
Asa Admin 24 December 2019 4:25pm
Not TV as such.
But as a heads up, Matt Lucas is playing three hours of TV theme tunes on Friday on Radio 2 and there’s a celebration of Tony Hatch’s music later in the evening.
VM
VMPhil 24 December 2019 4:25pm
The Raymond Briggs introduction is the best. Honestly I don’t know why they still use the Bowie version, it’s not very good.
TV
TVArchive Founding member 24 December 2019 5:01pm
The scarf is the hook in that Bowie intro. The Bowie intro was used on the VHS release. I grew up believing this Bowie's intro was always the case because of the VHS release.
UK
UKnews 24 December 2019 6:06pm
I remember the Briggs introduction (which is the best one) from the late 80s, possibly early 90s but can’t say when then Bowie version replaced it. I’d still take the Bowie intro over the Father Christmas one.

I didn’t catch it this year, have they continued to put an ad break in the middle where there never was one originally?