Previous Next
BR
Brekkie Wales Wales Today 22 December 2019 6:51pm
And that is part of the problem - they just keep squeezing in new channels rather than adjusting the layout to accommodate them.

The radio pages are just as bad now too.
Turns out nobody had 2020 vision.
MI
TheMike Central (East) East Midlands Today 22 December 2019 8:38pm
Russty_russ on Twitter posted RT listings from 2005 the other day: they were really clear compared to what we have now.

Since then, they've just made the font size smaller and smaller on some channels to fit in more channels on the Freeview pages and the pay TV page now seems to have Freeview channels as well.

Every other TV listings magazine has had an overhaul in the last five years reflecting the changes in broadcasting since digital switchover, the RT lags terribly behind.

Until recently, I felt the radio section was based on which DAB stations existed back in 2003, it took a long time to make any changes there, as well.

LondonNewsBites London London 23 December 2019 8:49pm
Not sure if this has been mentioned but CBeebies ALBA has a Christmas ident:
https://theident.gallery/player.php?id=BBCALBA-2019-CBEEBIES-INTRO-2
Get down to Complico for complicated deals!
RU
russty_russ Anglia (West) Look East 23 December 2019 9:12pm
Robert Williams posted:
Nothing has changed at all since he took over - in fact, other than the inevitable shuffling about of the listings as channels have come and gone, the design and layout of RT has remained almost entirely unaltered since 2010.


The only things that have changed of note is that the editor's note at the front of the mag has now gone and the personal touch from Mark is only seen at Christmas and What we watched with the obligatory Radio Times cover has moved from the back of the mag to the front.... oh and the massive price hikes every month!

There was a recent online survey so whether that comes of any good then we will wait and see.

Andrew Wood Founding member Central (West) Midlands Today 23 December 2019 10:46pm
LondonNewsBites posted:
Not sure if this has been mentioned but CBeebies ALBA has a Christmas ident:
https://theident.gallery/player.php?id=BBCALBA-2019-CBEEBIES-INTRO-2

Not a Christmas ident, just a winter ident. At least when compared to CBeebies which has fairy lights on the winter ident for Christmas.
FA
fanoftv Central (West) Midlands Today 26 December 2019 7:31am
I can’t see any discussion of it already but I noticed that Channel 5 added a sleigh over some if not all of their idents up to Christmas, a nice little touch.

As for Channel 4, I don’t understand their call on it this year. They have sporadically used their Christmas idents for some Christmas specials but not all, and even this morning going into a Christmas episode of frasier they’ve used the metal man set... unless this was an error.

tesandco Founding member Granada North West Today 26 December 2019 9:31am
fanoftv posted:
I can’t see any discussion of it already but I noticed that Channel 5 added a sleigh over some if not all of their idents up to Christmas, a nice little touch.


Good spot there. The really subtle addition from 5 only seems to appear from Christmas Eve from what I can tell, complete with UTV-style 'Santa Updates' from continuity throughout the evening. 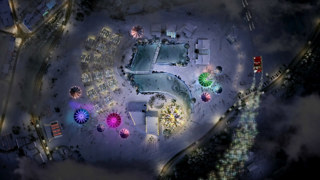 (Yes, I know there's a dedicated thread for 5's Christmas Pres, but as it's already been mentioned here...)
Last edited by tesandco on 26 December 2019 9:38am - 2 times in total
TV Whirl - Still covering UK idents, presentation, teletext and programmes after 19 years