Outdoor/Woodsy/Camping is the theme this year (July 2019)

This site closed in March 2021 and is now a read-only archive
MO
Mouseboy33 30 July 2019 6:20pm
The show is already about a month in. And its not going so well. Bullying and racist microaggressions are frequent as well as blatant racism and misogynistic sexism abound all within a silly camping theme is used this year. Its has been a real slog to watch the manipulated and highly edited shows, as CBS continuously hides certain houseguests racist, violent and sexist comments (even though they have been privately "reprimanded" behind the scenes by producers). They continue to get the "hero/nice guy edits" when the real stuff is happening on the live feeds. (But I digress, deep breath)...

Again this year the house is virtually the same. They re instituted the 2 diary room, that they used for CBB series. The normal one downstairs and a smaller CSO greenscreen room upstairs. Typically Big Brother converts one of the downstairs bedrooms after one week in the series into the Have-Not room, Big Brother decided to use the room upstairs next to the HOH as the punishment Have-Not room. Its previously been used for twists/tasks or gym for CBB.
The living room is ok. But i have to say when the pics were released online, BB Twitter exploded and overall the consensus was a big thumbs down. Its a very dark house and extremely more cluttered than usual. The Head of Household room its mean to be a "luxury glamping tent". Huge mistake. Its badly lit and extremely dark and overstuffed with junk. 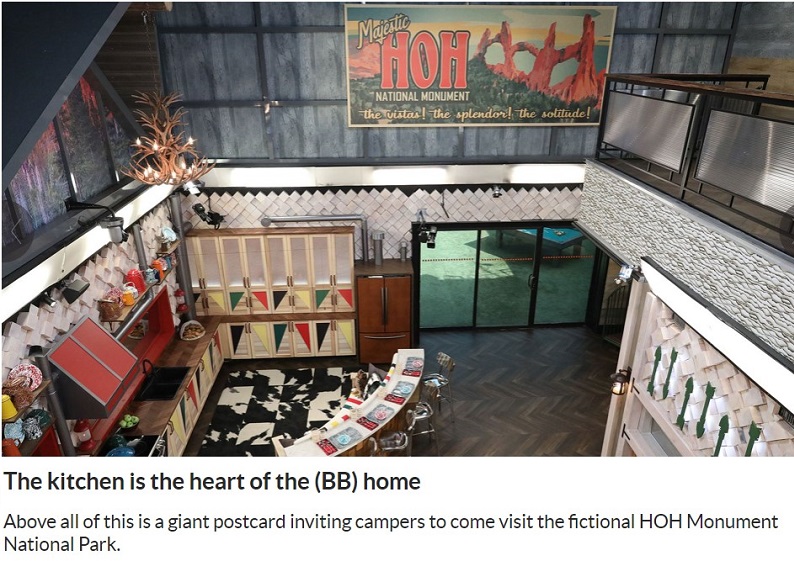 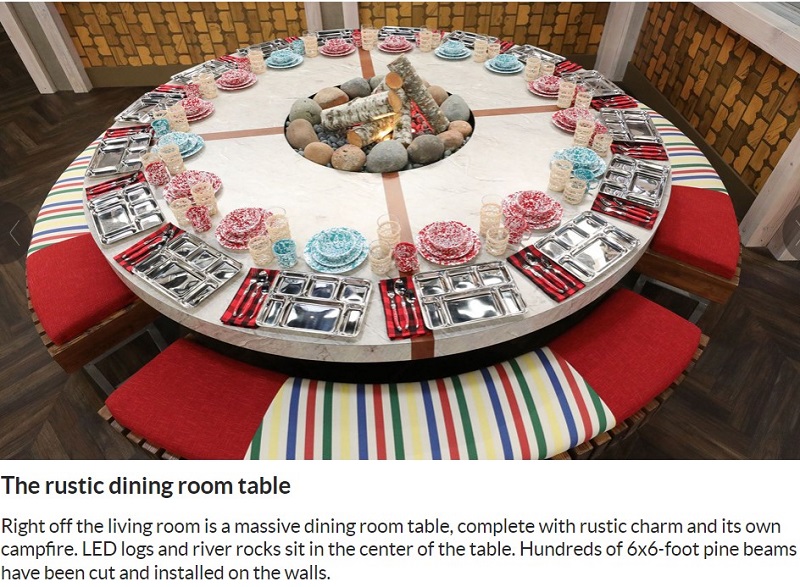 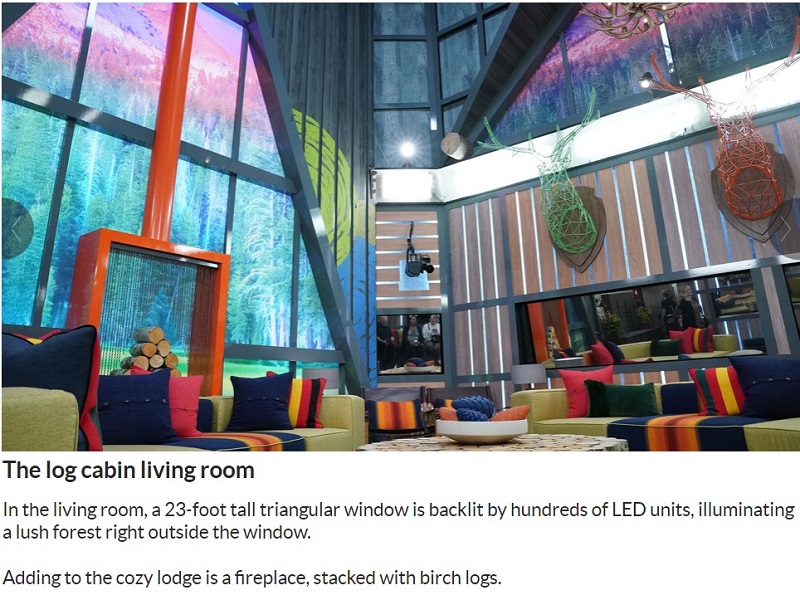 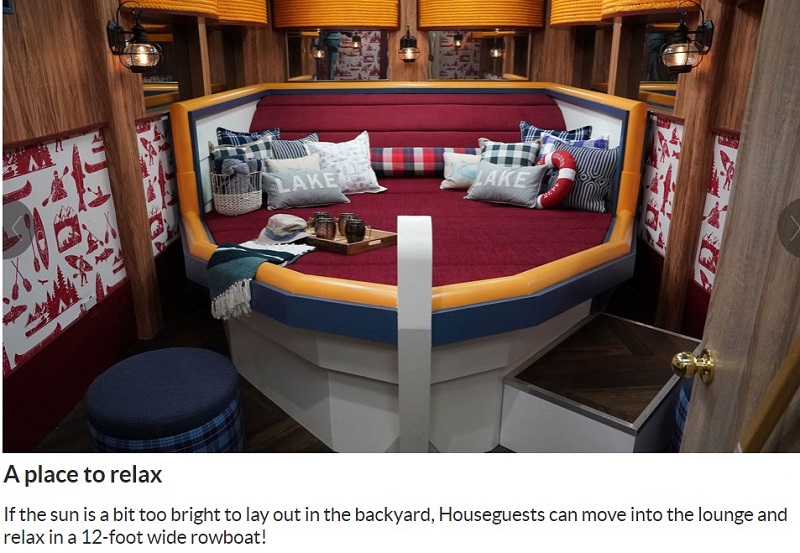 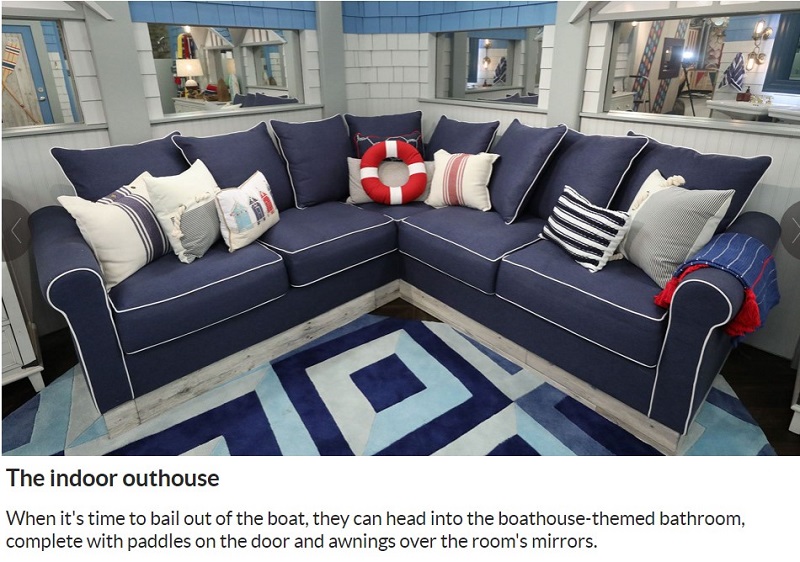 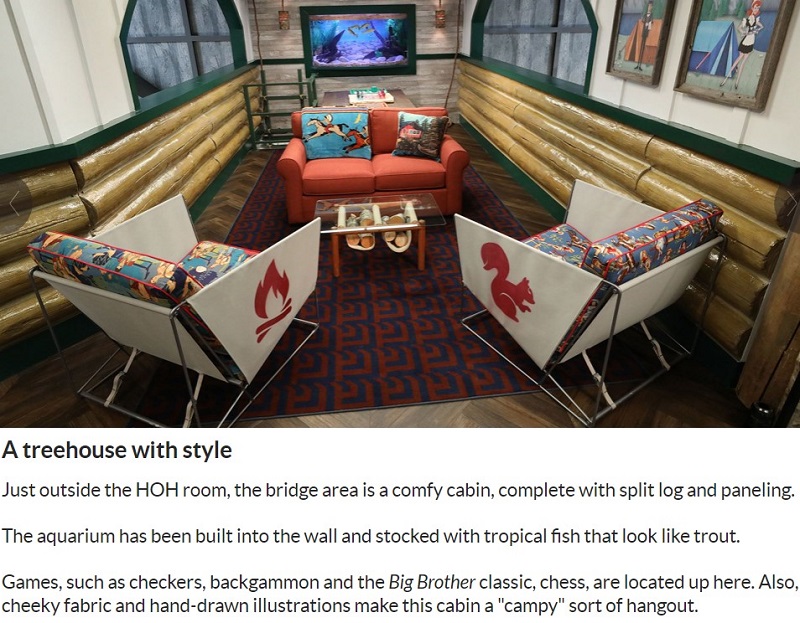 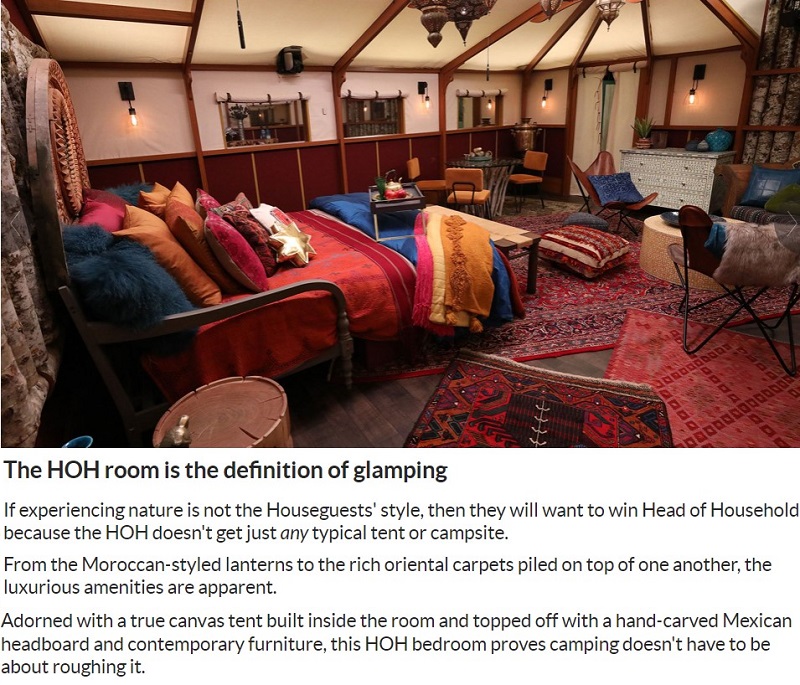 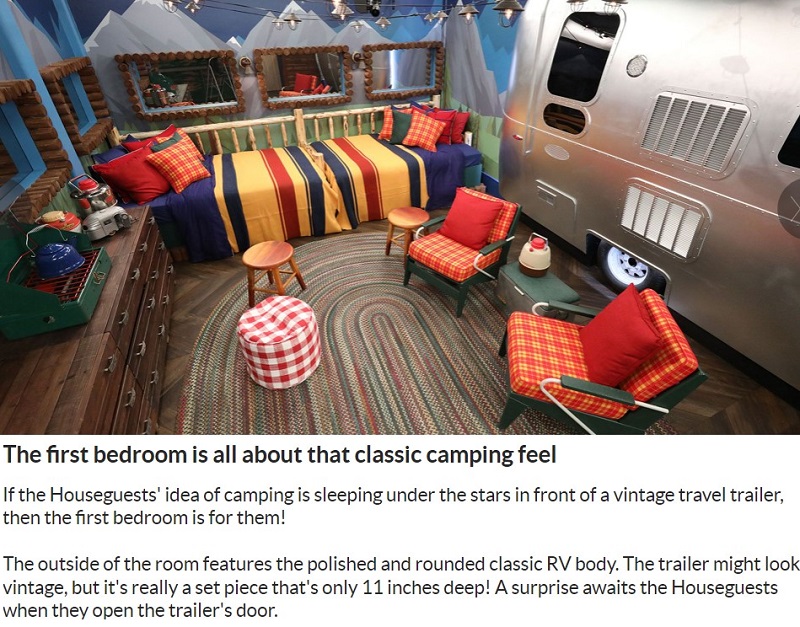 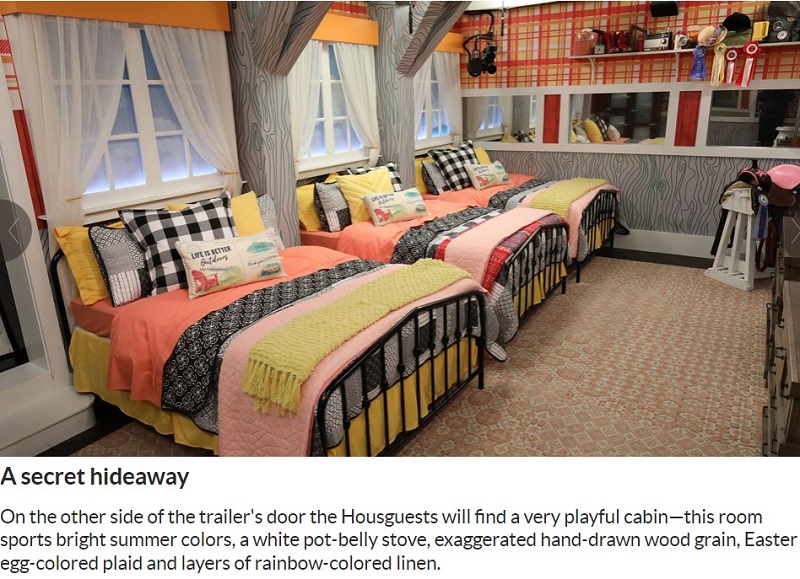 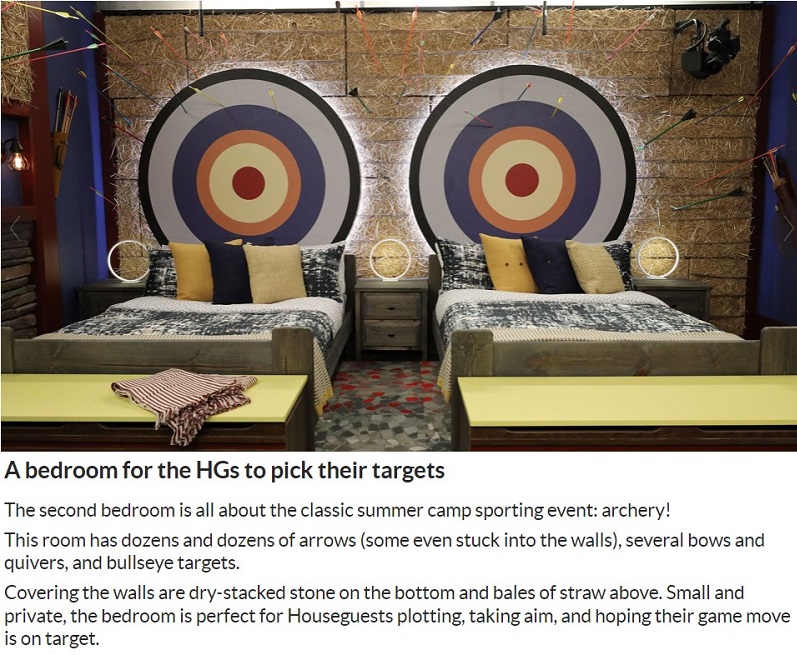 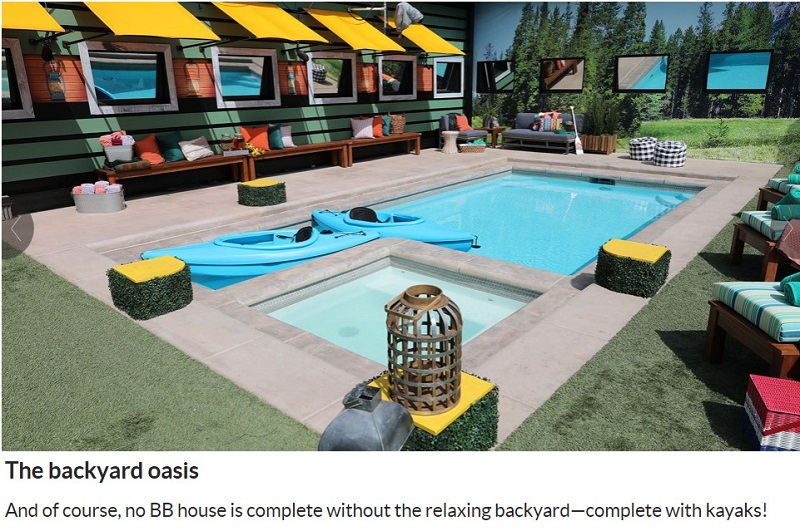 Last edited by Mouseboy33 on 30 July 2019 6:42pm - 2 times in total
BR
Brekkie 30 July 2019 8:06pm
I think on screen the house actually works pretty well. Shame the same can't be said for the houseguests - and a huge shame a couple of bad eggs spoils the whole show.
MO
Mouseboy33 31 July 2019 6:37pm
There are some decent elements. The bathroom is decent. The Livingroom walls are cool. The main sofa is horrible. Also Im not sure why they elevated the livingroom. Some houseguests have fallen over. Its not smart if they are trying to carry food thru the house because they insisted on having the kitchen on the other side of the house from the living room. I have to say old school lighting they carried over from Series 1 that they continue to use, is no longer working out the right way. Those angled light boxes. It seems by now they should have updated the lighting. Many of the rooms have darkspots and on the edited programs and especially on the live feeds the room are quite dark. Over the years its been noted that BBUSA fails to transform the rooms completely, especially the ceilings. WHich are often neglected. Usually featuring broken, water stained or even missing tiles. This year they decided in a feeble attempt to make a tent-like HOH room, they stretched canvas across the ceiling. Instead of using proper backlighting or using a theatrical lighting scrim, they seem to have used canvas and stuck a couple of lights behind it. This was probably far to dark on camera so they added a few fluorescent-like bars across the top of the "Tent". The over all effect is hideous and dark. Coupled with the vases and rugs and tables and chairs other stuff stuff jammed in the room, it feels claustrophobic and dark. Less is more. Goodness.
MO
Mouseboy33 2 August 2019 6:56pm
Kinda of a weird thing happened last night. 3 hours before the feeds as the houseguests were prepping for the live eviction, a move start to flip the vote and save someone from going home. Suddently as things started heating up the feeds went down. Cliffhanger!. Prompting the BBTwitterverse to go into meltdown. When the live show started host Julie Chen started by saying they dont know whats going to happen, blah blah blah. The vote happened and the vote didnt go the way people thought it was going to and there was anger all around. The viewers were all confused as to what happened. Well apparently 1 hour before live eviction episode a massive fight started. Later that evening a "mysterious" account appeared on reddit claiming to have a 80 min leak from before the live episode aired including the big fight. Many livefeeders wen nuts online and twitter are speculating that this came from GLOBALTV in Canada. The test panel says Big Brother Canada. Apparently the ingest feed was from CBS to GLOBAL Master control and someone grabbed the livefeeds and as you seen the video live behind the scenes preps from the host and makeup team as the fight was continuing just as the show was about to go live to air.
Livefeeders are wondering if GLOBAL will get reamed out by CBS for stealing their thunder for the edited show on Sunday and if someone could loose their job. Never seen this happen in 20yrs of the show. GLOBAL and BBCAN are pretty savage on twitter when it comes to BBUSA. So its quite interesting that this 80min leak came from Canada.

Apparently CBS is trying to get the video removed on copyright grounds. Sounds like they are pissed. As this so much of their content shared on social media, which feeds viewership of the show.