This site closed in March 2021 and is now a read-only archive
Previous Next
TE
tellyblues 25 January 2021 5:14pm
Still Game waning now. New series of Scot Squad down slightly on last. Probably doesn't help that it's on all year round.

Paramedics on Scene doing very well so will likely get another run.


Regional ratings are difficult to find but knowing that River City and Reporting Scotland both get around 400k I reckon anything that managed 100k or lower (the norm for BBC Scotland) in primetime slots on the main channels would be deemed poor.
TE
tellyblues 28 January 2021 6:22pm
Debate Night is moved back to its previous spot of 10.30pm from Wed 10th Feb.


It's not a second series, it's the first network screening of the first.
RL
Running Late 9 February 2021 5:10pm
Steve Williams posted:
tellyblues posted:
Inside The Zoo moves to BBC2 for its second series.


It's not a second series, it's the first network screening of the first.


BBC Two seems to get a lot of content from the Nations these days, even before Covid, I guess it's just cutbacks.
TE
tellyblues 9 February 2021 7:37pm
Substantial representation from outwith England should be the norm really.
CF
CallumF 14 February 2021 11:06pm
BBC Scotland experiencing some technical issues this evening with Seven Days failing to play out as scheduled.

Currently a banner on screen stuck over a BBC Bitesize advert apologising for the loss of pictures and saying they are working to correct the fault.

Then cut to a frozen iPlayer advert, banner reappears after before cutting to the CA over an ident, seemingly unaware of what is coming up - apologising that Seven Days won't air, "something tasty" though before a long pause and a Nick Nairn repeat.
Last edited by CallumF on 14 February 2021 11:10pm
CU
Curto21 15 February 2021 12:06am
The technical problems meant that BBC Scotland closed down for the night 5 minutes later than planned.
PA
paul_hadley 15 February 2021 12:07pm
Probably no one else was watching to notice.

TE
tesandco Founding member 15 February 2021 8:45pm
Don't have the following junction from when they got going again as the whole thing went on a little too long for the recording last night. But the bulk of the 'action' is here for anyone interested, just... try to remain calm from the sheer excitement. Seems all the frozen screens were stills from trailers that had aired in the junction immediately preceding the fault. 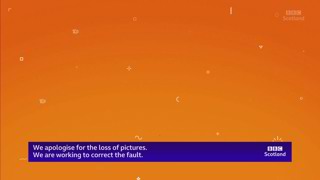