30 years since the closure of BSB


Technically yes.
Can you point your squarial at it? No.

Looking at the above linked website, both satellites are currently heading "towards" Fiji (even though they're actually not heading anywhere and are literally drifting around in space and as the earth rotates beneath them) and presumably they're both electronically dead or disabled/turned off.

Makes you think though, if aliens do come along to our planet the amount of crap in the junk orbit they would have to navigate...

TM
ToasterMan Granada North West Today 5 December 2020 4:44pm
Does anybody have in their book collection a copy of Dished! The Rise and Fall of British Satellite Broadcasting, the book which Square Peg was based on? Don't suppose there's anything it covers that was missing from Bob the Fish's documentary? 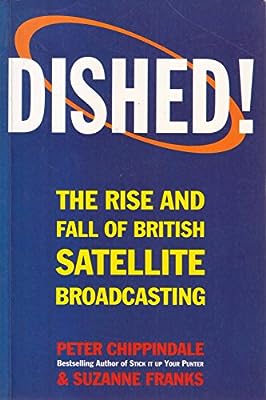 Last edited by ToasterMan on 5 December 2020 5:03pm
BE
Bennyboy1984 Meridian (South) South Today 5 December 2020 4:54pm
I haven’t seen any squarials here in Poole/Bournemouth but I have seen a lot of rusty or “grey” mini dishes.

Jacq Wales Wales Today 5 December 2020 4:58pm
ToasterMan posted:
Does anybody have in their book collection a copy of Dished! The Rise and Fall of British Satellite Broadcasting, the book which Square Peg was based on? Don't suppose there's anything it covers that was missing from Applemask's documentary?

I was also wondering this. I'm on the last episode of the doc, I've been watching it this afternoon.
It's very good
Why don't you let yourself just be wherever you are?


ISTR - though I may be wrong - that they were able to broadcast 16:9 movies - though I don't know if they did? I have dim recollections of BSB having modified wide-band Betacam SP decks installed for this very purpose. I'm trying to rack my brains whether it was BSB or C4 (for their PALPlus stuff) who had a 16:9 telecine that was used by others, including Nordic broadcasters based in the UK, for transfers of movies for MAC 16:9 broadcast.

The BSB boxes didn't letterbox 16:9 broadcasts when output to 4:3 TVs (like DVB boxes routinely do) - as that would have required an expensive frame/field-store, and D-MAC only required a line-store - but they were able to do a pan-able 4:3 cut-out by altering the line clocking.

VMPhil Granada North West Today 6 December 2020 11:52am
Yes, my question was actually prompted by this video I found of someone watching a D2-MAC widescreen broadcast and changing the settings on the receiver between 16:9 and 4:3 cut-out!