Oh my, we are all going to be in a state come Christmas Eve if the Tories win 😧🤪😴 #ge2019 pic.twitter.com/DPea6KXhoa

BR
Brekkie Wales Wales Today 17 November 2019 11:20am
Brexit is for life, not just for Christmas.

Still a long way to go in this campaign but seems the Lib Dem recovery hurts Labour far more than it hurts Tories, so Boris may get what he wants for Christmas as a result.
Stay Local. Stay Safe. Stay Alive.
MA
mapperuo STV North Reporting Scotland 17 November 2019 1:40pm
Brekkie posted:
mapperuo posted:
Brekkie posted:
I suspect it is an election that those who count the pennies at the BBC will observe closely.


They already have the large set though, wonder if it might cost more to come up with something new to fit in NBH

They don't have to build the set though and presumably NBH will be little more than using a bigger desk, which again they already have.

It would be a huge shame to see the large scale election sets disappear for good, but when you compare it to what ITV and Sky do in these days of "delivering quality first" if it can be done at NBH for less then that might just have to be the case moving forward. Of course though what we see on screen on election night in terms of the set is probably only a small fraction of the cost of covering each election.


I will certainly miss the huge sets as well, Just thinking about what they could do...

They could put Vine in Studio A with his big swingometer and with VR make it look like an extension to Studio B, similar to the virtual screen they had last year?
ST
Stuart West Country (West) Spotlight 17 November 2019 3:28pm
It's seems rather early for them to be making changes to the 'soft area' of Studio B, such as the large desk and the extra LED screen. I wonder whether they are just taking the time to re-install the 'trundle cam' above the screen (assuming it's not been left there permanently).

Marr actually doesn't look too bad from the desk area.

dosxuk Yorkshire Look North (Yorkshire) 17 November 2019 3:42pm
mapperuo posted:
They could put Vine in Studio A with his big swingometer and with VR make it look like an extension to Studio B, similar to the virtual screen they had last year?


They used to do this in the TC7 days when Vine was at Greys Inn Road. 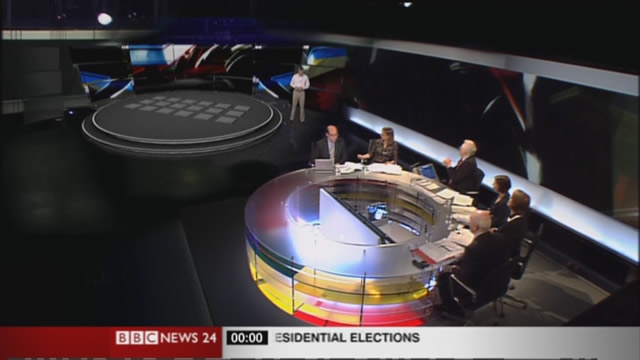 AA
Aaron_2015 West Country (West) Spotlight 17 November 2019 5:34pm
From a presentation perspective it is disappointing that the Election Results will be coming from Studio B, does the set in B fill most of the studio space or is there space to expand? I wouldn’t be surprised if B is set up in a similar way to the EU Elections. If so, the desk could do with being slightly further forward; the screens in B look quite dated on the close up shots IMO. Using the newsroom at NBH would look fantastic, but understandably it’s not very practical, especially on a big news night.

JK
JKDerry UTV Newsline 17 November 2019 8:37pm
The BBC might be thinking that this snap general election is not worth mounting the huge vast set in the 11,800 Sq Ft Studio D at Elstree this year.

One of the more feasible ways is to base themselves in Studio B and use Studio A virtual set, since BBC Broadcasting House is the news headquarters of the BBC, it should not be hard for them to mount the general election from here.

ITN for ITV News have always had to make do with either of their two main studios at ITN, both small in size at just under 2,500 Sq Ft each - with Studio 2 out of action, as they have 5 News in there, so Studio 1 would be re tailored for the general election.

I have always thought it is much harder for ITV News to practice and rejig their set for an election, as they have no other alternative to move to whilst they rehearse etc.
BR
Brekkie Wales Wales Today 17 November 2019 8:46pm
ITV have no news channel now though. They could probably use the 5 News studio overnight but not the next day, so not practical. Of course though there are other green screen studios that could be hired just like the BBC used to use Grays Inn Road.