International News Presentation: Past and Present


This was in the midst of a 20+ year run as the top local news staton - by far - in the Seattle market.

A poorly rated station, KING was reinvigorated in the early 1990s by a newsdirector named Bob Jordan.

He laid off a significant portion of the existing news staff and found new talent. Everything he put in place in the 3-4 years he was there in the early 1990s continued well into the 2010s - through a couple of ownership changes until the station was dismantled by Gannett/TEGNA over the last few years.

There are some newscast clips from the 1990s on YouTube. The talent in them, for the most part, had long careers either in Seattle, or moved up to larger markets on the national level. For the most part, Bob Jordan had an incredible eye for talent. And he revamped the branding and the visual design of the station. The branding survived all the way through the TEGNA buyout.

At the time of this promo, Lori Matsukawa had just moved from weekends to the 11PM news, co-anchoring with Dennis Bounds.

The main news team - with Dennis Bounds, Jean Enersen or Lori Matsukawa, Jeff Renner-weather, and Paul Silvi stayed in place until TEGNA did nationwide buy outs of talent at or near retirement age.

Enerson, who had already cut anchoring out of her schedule, took the buyout 48 years in 2016. Bounds, who anchored evenings from 1994, also took the buyout. Jeff Renner, who did weather from 1980, exited as well.

Earlier this year, Lori Matsukawa, quickly approaching 65 years old, decided it was time to exit too, having been at the station since 1983.
WW
WW Update 31 July 2020 3:44pm
Current national, regional, and local news intros from Switzerland:

WW
WW Update 1 August 2020 10:20am
Friday's edition of Our News from Our TV in the Bahamas as Hurricane Isaias approaches the island country:

Interesting how the German language broadcasts are so German and the French ones so very French.
WW
WW Update 3 August 2020 11:25am
A 1996 promo from Australia highlighting Seven's links with CNN, NBC, and Sky:

Here are examples of the headline sequence...
BEFORE
https://www.youtube.com/watch?v=EZlfpKEQkKs&t=11s

Personally, I think it looks worse; it looks too much like a 'smart watch' with at times large Euronews-esque astons. It's a shame as IMO it had the most innovative presentation styles I've seen from any news channel across the globe, perhaps it will grow on me?!
RB
RedButton World News 4 August 2020 1:54am 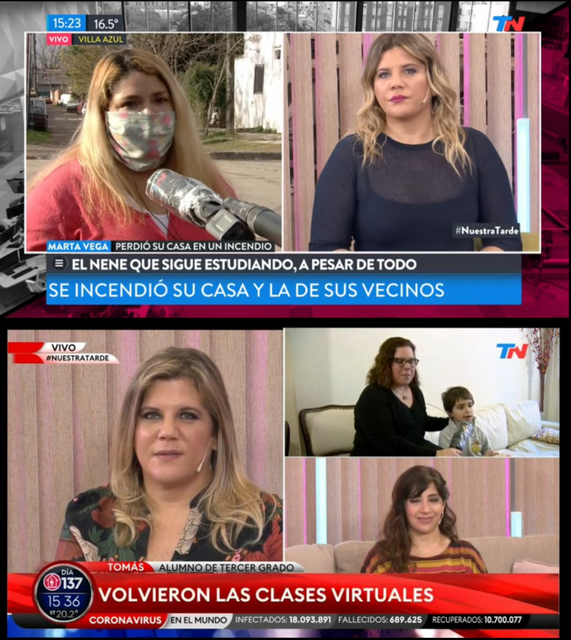 Here are the differences between the two graphic packages.
The problem with Argentinian news channels is that they usually have too big astrons. Also, in the case of Todo Noticias, the music and studio presentation has changed for the worse in the last few years.
Here are the official live feeds of the two top news channels (there are 6 in total which i think that is one of the highest in a country on the world) to show as an example:

Here was the previous open (with the previous team of Jeon Jong-hwan and Kim Su-ji), as seen on December 2019

Звезда / Zvezda is a Russian television channel owned by the Ministry of Defence.

what West Country (East) Points West 7 August 2020 10:30pm
This is on the way out soon, so I thought I’d highlight it here. Also, not sure if anyone’s pointed this out before, but is it just me who hears the similarity to the BBC Breakfast News theme (the 1997 relaunch)?

and the Breakfast News theme, for reference: