This site closed in March 2021 and is now a read-only archive
Previous Next
LL
London Lite Founding member 27 August 2015 11:52am
The weather presenter seems to be taking it the worst, on the verge of tears during every forecast and being supported by the female anchor.

They also did a minute's silence at approx 0650 ET in tribute to their dead colleagues.
MO
Mouseboy33 27 August 2015 12:53pm
Must be just a horribly sad newsroom. Its amazing how all the 1000s of stations around the country have tweets and sent messages of support to this small station in a small city. Because frankly they know this can happen in any part of the country in any market. The Camera is no longer and shield and protection from being yelled at, abused, assaulted and now horrifically being killed on camera....(no words)
Peter Nickeas a crime beat reporter for the Tribune wrote a powerful post regarding violence that most people dont see but just as bad. Kinda in some ways makes us all think about what we are experiencing. IMO.
https://www.facebook.com/peter.nickeas/posts/948535360974?fref=nf 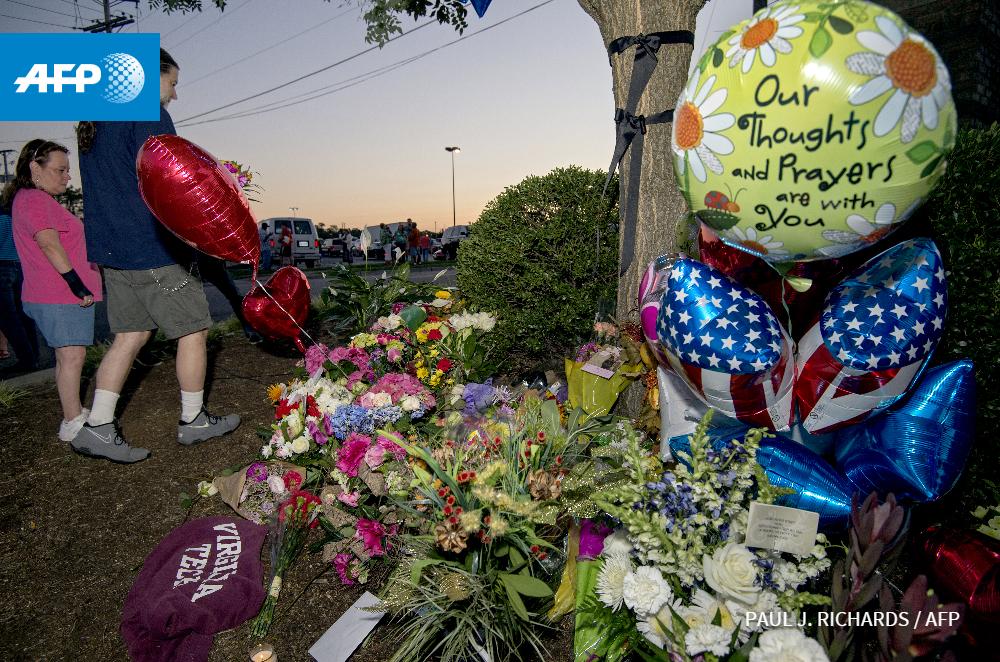 Many people are decrying the hideous NY Daily News Cover. Disgusting as well. 3 pictures of them being shot. SImilar to the Sun. But seeing the as the Editor worked at the Sun, Mirror, Daily Mail...not surprising.

The interviewee Vicki Gardner has been upgraded to good condition. 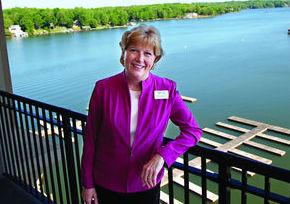 Last edited by Mouseboy33 on 27 August 2015 1:03pm - 2 times in total
MK
Mr Kite 27 August 2015 1:29pm
Independent posted:
It seems everyone including Al Jazeera and the BBC showed clips of the gunman's video. I just don't see the value of it and the quote above doesn't do much to convince me to change my opinion. Although I guess it could be worse, like the Daily Mail cover and what CNN/US did earlier.


It not only doesn't add value but I believe it to be actually damaging. For a start, no murderer should be allowed a platform. Not only is it morally wrong but it encourages other nutjobs who crave such attention. The ISIS videos/images are similar. They're attention-seeking propaganda and the Western media does their dirty work by showing images and excerpts from the videos. I understand that such things must be reported but we don't need the pictures, in my opinion.

The footage from the cameraman in this murder may not be in the same league as the ISIS films or, say, the hanging of Saddam Hussein (which I believe is also not difficult to find on the internet) but I don't feel it's good for the soul for people to have seen that. We knew what happened. A description was good enough. I think the murderer's own footage is probably somewhat more graphic and that it's only been used in an edited format as he stalks his victims but again, we don't need to see that and I refer to my earlier point about giving such people a platform.

I personally think media should have a policy of not directly rebroadcasting footage that was made by murderers or terrorists. Certainly with ISIS, I can only believe such things provide further encouragement to commit more vile acts.
MO
Mouseboy33 27 August 2015 1:33pm
Heartbreaking
Her anchor/presenter partner and the meteorologist embrace. 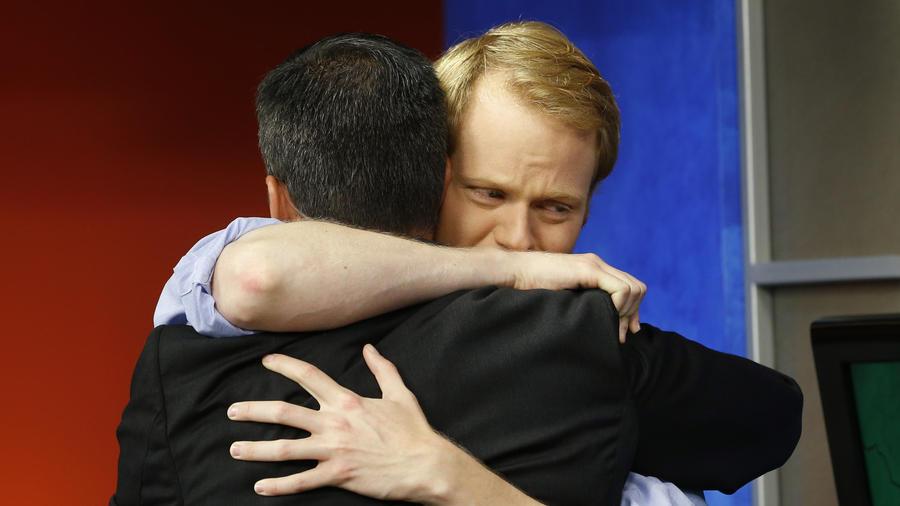 Metorologist and the presenter who was on set when she was killed...back at the anchor desk. SOLID. 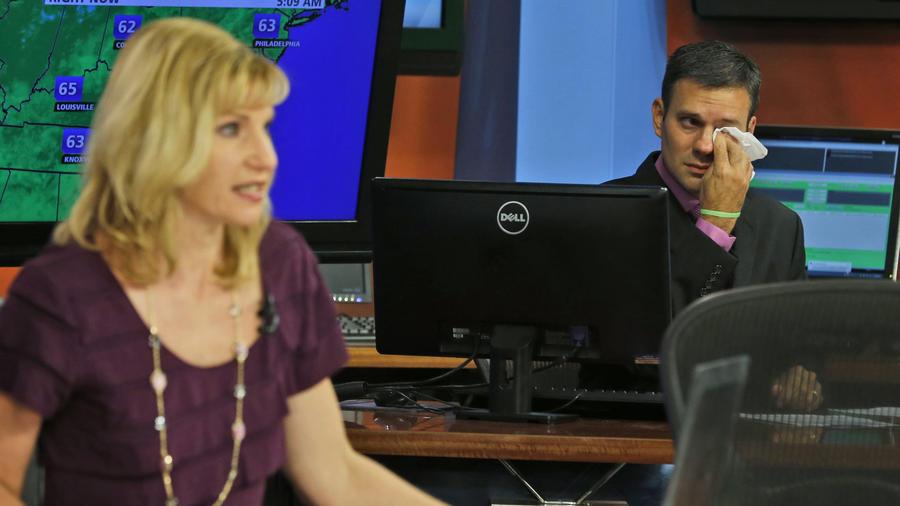 The minute of silence this morning.

Anchors and reporters outside viewing the memorial 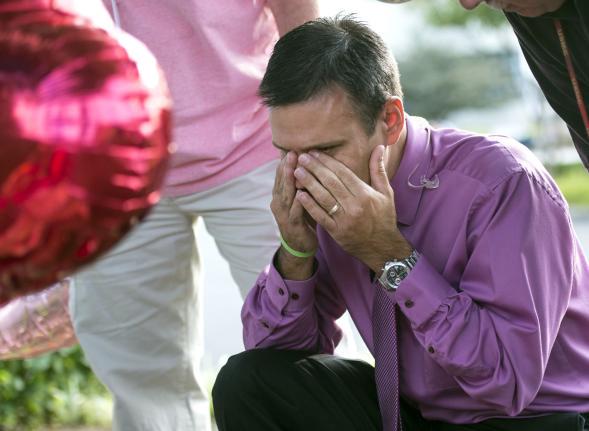 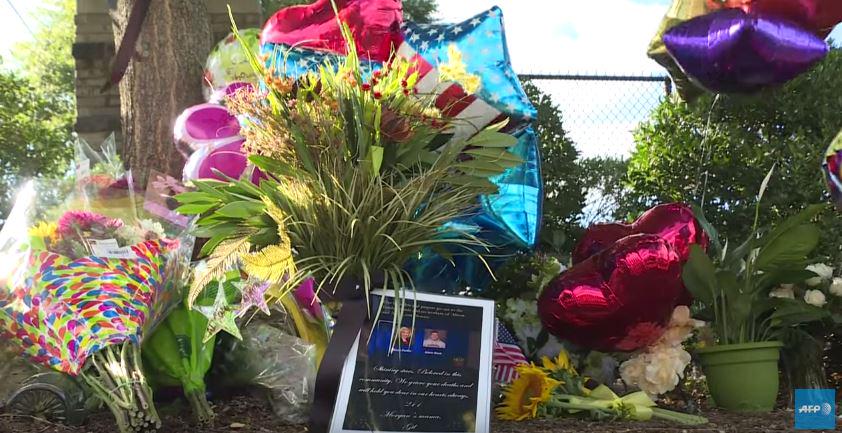 The World at One @BBCWorldatOne
Some coverage of #VirginiaShooting in danger of "indulging in... the pornography of violence" - @JasonCowleyNS
Last edited by Mouseboy33 on 27 August 2015 3:32pm - 6 times in total
FO
fox1 27 August 2015 2:32pm
This event is beyond sad, outrageous, sickening - there is something very rotten happening at the core of society in general, and particularly American society.

A couple of things.

CBS again shows they are the true journalistic newscast out of the three evening programs. They were the only one to show anything of the shooter's video. Similarly, back in January, they were the only newscast to show the Muhammad cartoons. No accident.

The Daily News and the others - I for one agree with their decision to show the shooter's POV:
1) Those images ARE news - on many levels - it's shooter P.O.V., it's caught on video, he used a Go-Pro, he broadcast it online... all of that is news. They speak to the depravity of our society and the deep problems at its core. News outlets should show them because their truly shocking nature may effect change on some level that is desperately needed.
2) In terms of whether the image is too gory or tasteless to broadcast - I believe it is close to the line but not over the line - mainly, in my opinion, because they do not show the actual murder. I am speculating but I believe the frames show the bullet missing - he then killed Adam and then, a few seconds later, Alison.

For me, the newspapers should show the images they have shown, if they so choose. People should not be blaming the newspapers, in my opinion, but should direct their ire toward the lax gun laws and actually the violent, divided, 'broken' society in which this occurred.

Also, I must say the people at this station seem to be unusually good, down-to-earth people unlike the vacuous, plastic types that populate stations from LA to Miami.
Last edited by fox1 on 27 August 2015 2:56pm - 3 times in total
CA
Cavan 27 August 2015 2:50pm
Personally, what I find most sickening about this truly tragic situation is that there are people trying to debunk the event and find holes in the two videos showcasing the shooting .

On some level i agree..... Yes that is the trend in certainly in LA and Miami and some larger markets, but I wouldnt make a sweeping generalization. Certainly WDBJ is more the norm than the exception, as there are hundreds of small stations like that across the country that do the grunt work and usually at the front of the stories that sometimes turn into larger national stories. The are plowing away in these small markets with little money learning their trade. All of these people are university trained journalists and meterologists and broadcast professionals. Some will never make to the big markets, but their value as journalists and broadcasters, shouldnt be discounted or diminished just because they arent in the hallowed newsrooms of CNN, KABC, WNBC, CBS News or the BBC. (i.e. Daily Mail's "news girl" headline)
I have personally seen the solid professionalism of these small stations when things like this happens. (Yeah sometimes they can play it loose sometimes) But when they are covering some horrific incident, and yes this is a different situation entirely, but somehow they continue to do their jobs and report the news thru their tears. Amazing.

This SHOULD have been the cover of the NY Daily News

Last edited by Mouseboy33 on 27 August 2015 3:11pm - 6 times in total
LL
London Lite Founding member 27 August 2015 3:14pm
After the minutes silence, they attempted to have some resemblance of normality by doing a headline round-up of national/international news, then a pre-recorded segment of birthday mentions followed by a final word by the anchors.
MO
Mouseboy33 27 August 2015 3:23pm
Tributes pour in from newsrooms all over the country and around the world.
WOW
reporter - cameraman fist bump 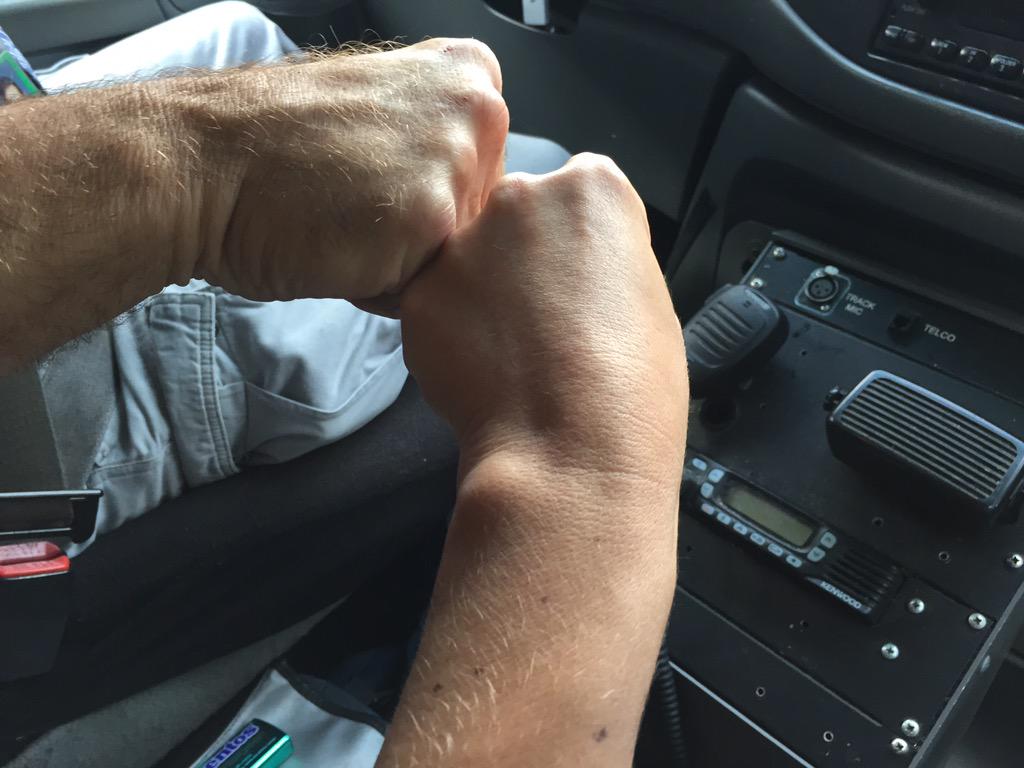 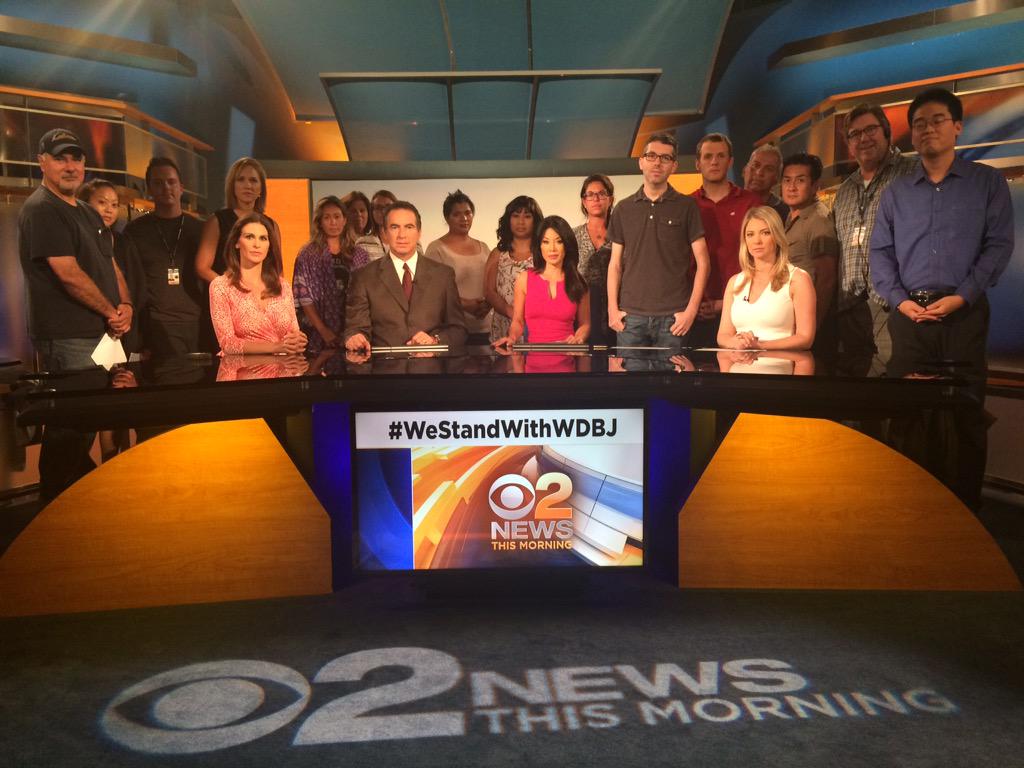 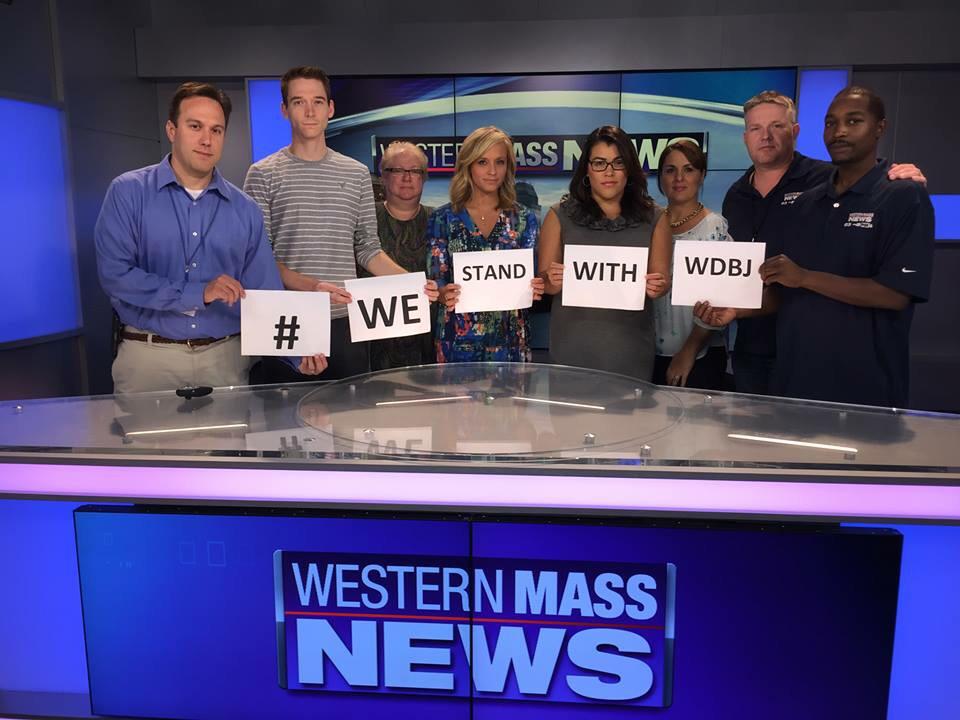 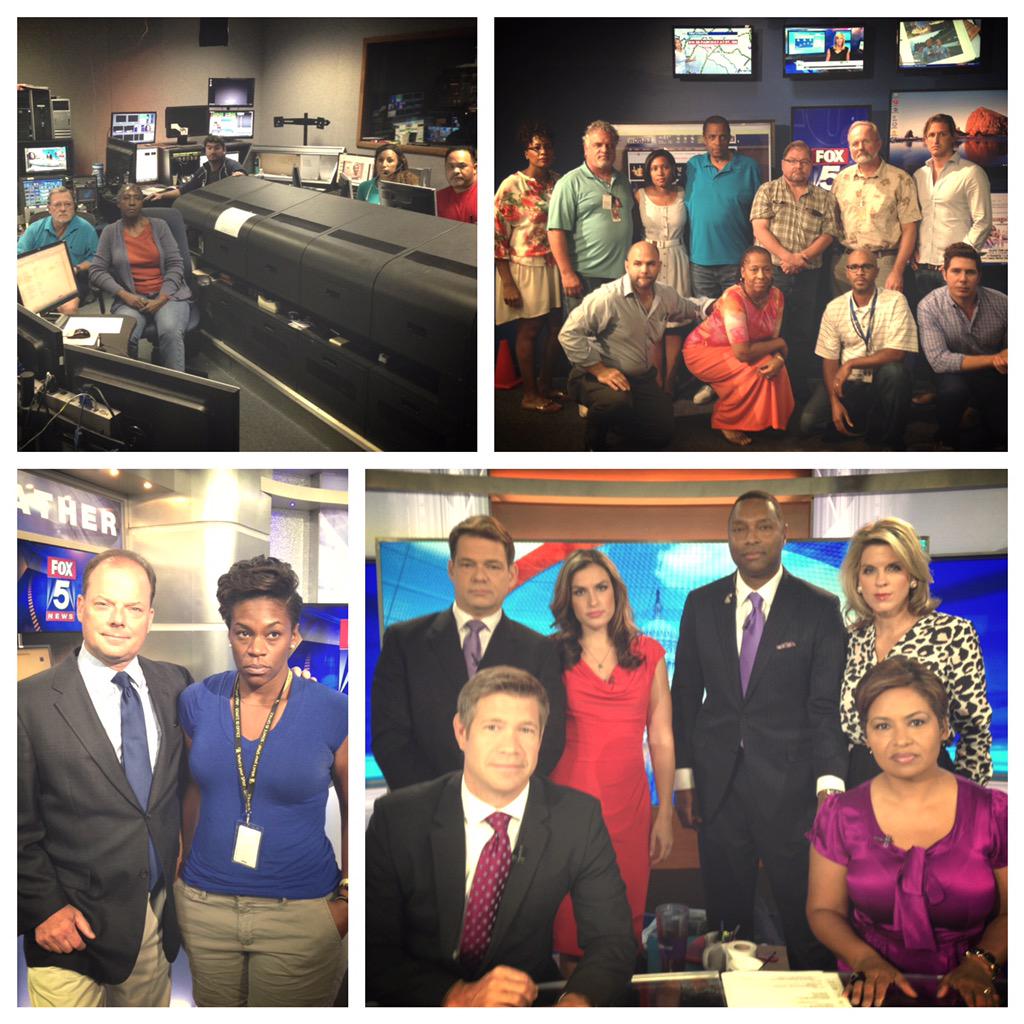 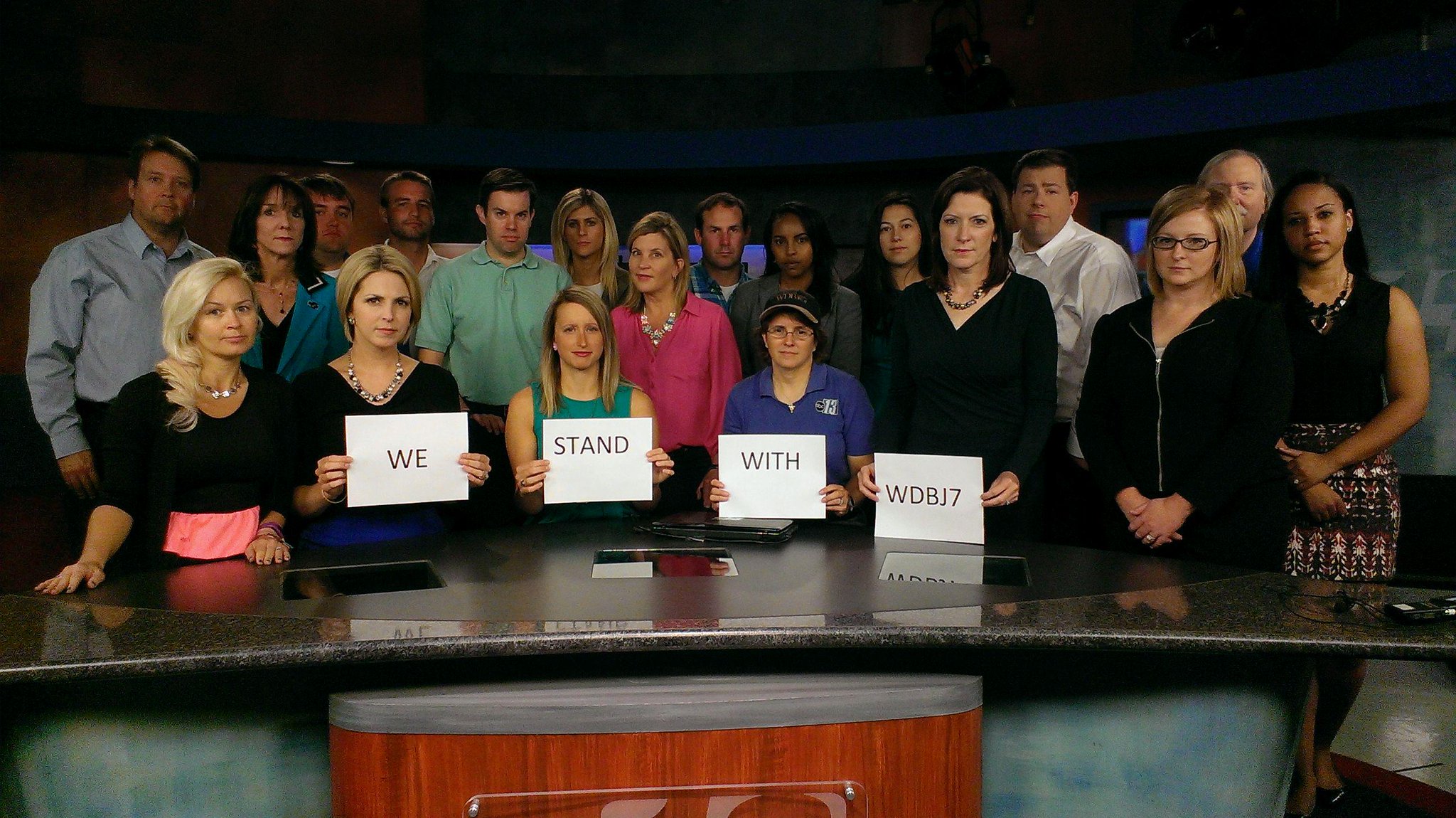 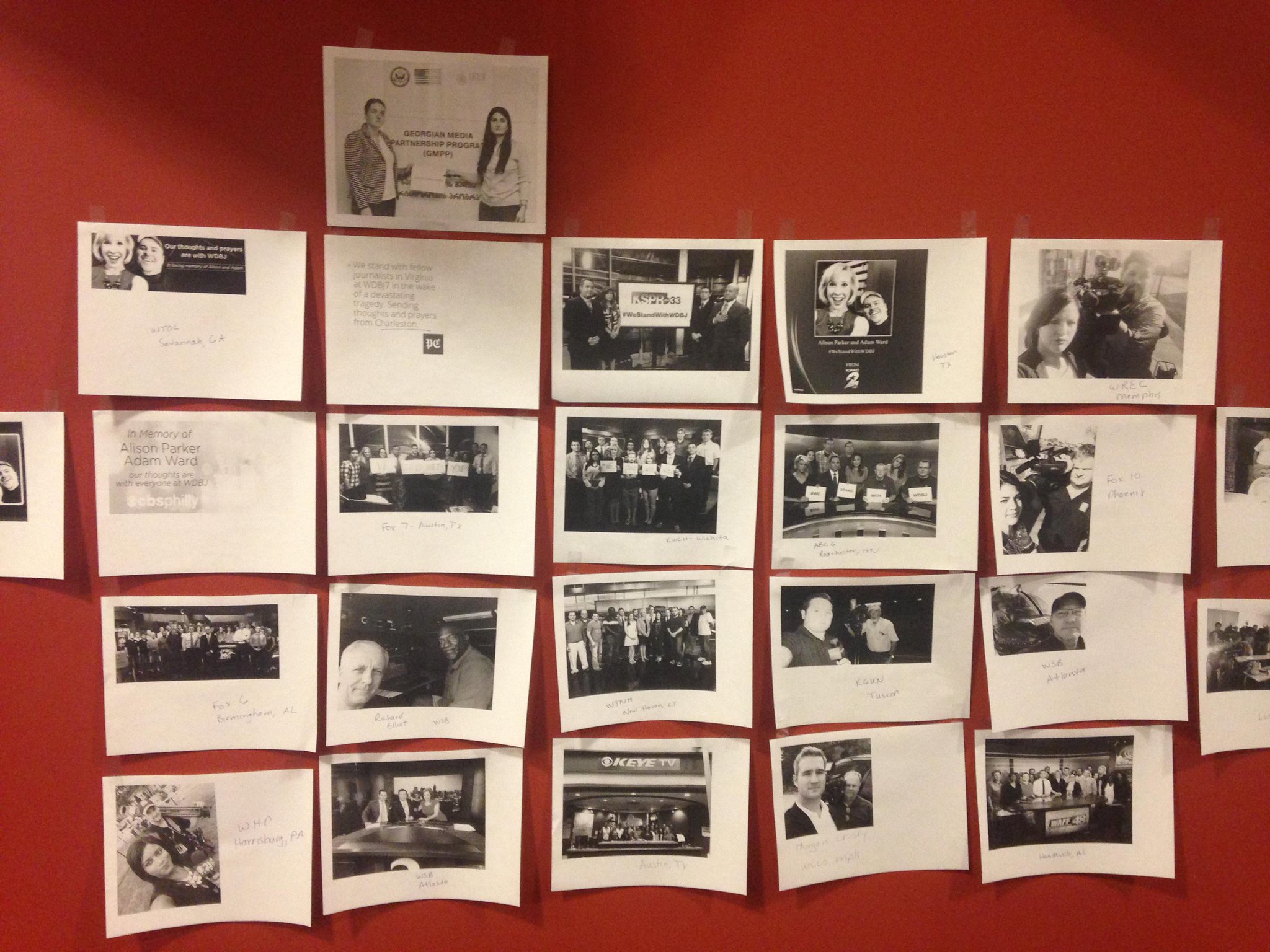 SC
scottishtv Founding member 27 August 2015 4:51pm
Whilst some of those people at the station may want to keep working, it's clear that some there shouldn't be there. The weatherman, for example, should've been encouraged to grieve privately off-air rather than try to struggle on, then fall apart. I'm basing this on the images posted above.

I find the interest in gawking at station's output now "to see what they will do" a bit unsettling, almost like it's for voyeuristic entertainment.
LL
London Lite Founding member 27 August 2015 5:14pm
scottishtv posted:
Whilst some of those people at the station may want to keep working, it's clear that some there shouldn't be there. The weatherman, for example, should've been encouraged to grieve privately off-air rather than try to struggle on, then fall apart. I'm basing this on the images posted above.

I think the problem is that it's a small town operation which has already had to bring in staff from a sister channel to help fill positions today as it is. At some point, those staff who were on duty yesterday morning who returned today will have to have some form of convalescence leave, counselling and to attend the funerals of both of their colleagues.
MO
Mouseboy33 27 August 2015 6:02pm 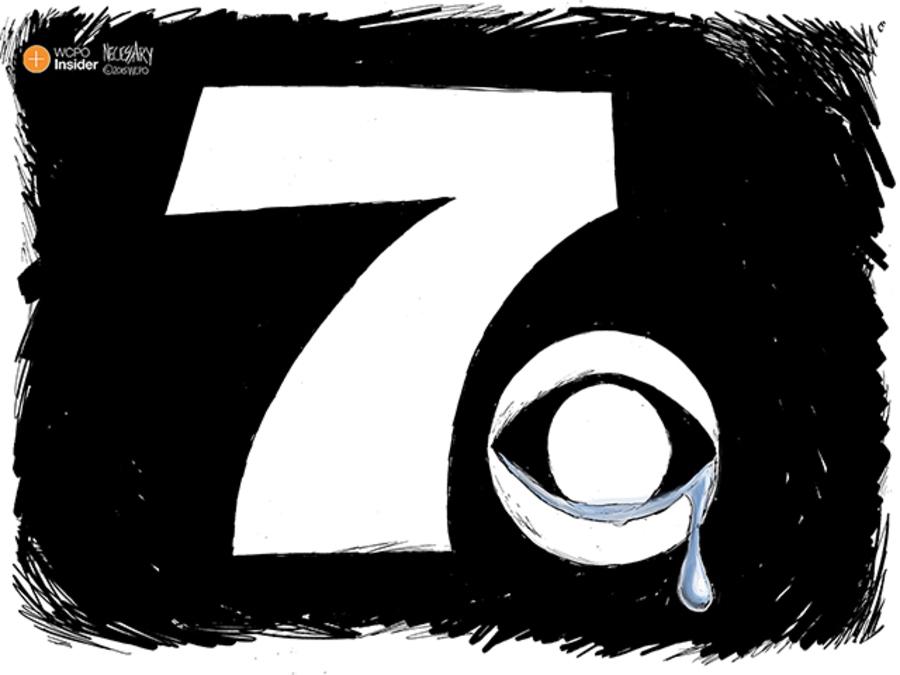