Twenty Years of the Thunderclaps

Previous Next
JK
JKDerry UTV Newsline 10 May 2019 12:38pm
On this day in May 1999 the BBC relaunched their national news presentation and introduced for the first time their news music, incorporating the pips.

The BBC News studio in the old Studio N6 at what was BBC Television Centre was given a new look. Single newsreader format, and a very nice studio design, with a view of the BBC News Centre as its backdrop.

The start of the corporate look at well and truly begun, and it has lasted (in one shape of form) now 20 years later.
SW
Steve Williams 10 May 2019 1:00pm
Yes, was a very interesting period for television news, as three broadcasters revamped their news bulletins in quick succession with Channel 4 changing in January 1999, ITV in March and then the Beeb in May. And the Beeb one was probably the most radical, the big changes revolved around the Six as it was around the same time as the clamour was growing for a Scottish Six, so they emphasised how it was going to be more representative of the entire UK and for the first eighteen months it was the only bulletin with regional headlines, and they came back at 6.55 for an update to make the whole hour seem more integrated with the regional news.

It was much talked about at the time, as mentioned in the Jill Dando thread there was much discussion as to who the presenters would be, Huw Edwards seemed a really leftfield choice at the time because he hadn't really been very high profile before that - he was about the level Reeta Chakrabati is now, I'd say - and there was much debate about how they'd given him a makeover and a new haircut. Fiona Bruce did the Six a couple of days a week and for a while there was a "family" of reporters, including Sian Williams, Fergus Walsh and Helen Rollason, who would report exclusively for the Six.

It was all much discussed and parodied at the time but looking back I think it was a really pivotal moment in BBC News and it did make a real difference. Before that, with the virtual set, BBC News looked incredibly po-faced with all the excesses of Birtism, and ITV were much more appealing, but now it was a bit more welcoming, without sacrificing any of its authority. It was undoubtedly helped by ITV's haphazard scheduling but it started to out-ITN ITN in terms of warmth and appealing to a wider audience. And as Roger Mosey pointed out in his book, they had a really diverse presenter line-up in terms of age, race and gender.

I think it was a really important moment for BBC News and a really successful revamp.
RE
Revitt Yorkshire Look North (Yorkshire) 10 May 2019 2:20pm
I remember being pleased to see they finally revamped the news output. By then the virtual set seemed have been used forever, I was very young when that launched so the revamp was the first time I'd seen BBC News look any different.

I look back at the virtual set with a bit of affection though now. Probably because it reminds me of being very young and being scared of the Nine theme, and realising how stupid that was.

I wonder if they still have the real parts of the virtual set stored somewhere?
BC
Blake Connolly Founding member London London 10 May 2019 4:00pm
A very exciting time, it was such a difference to what went before, the music and warm colours were a world away from what was expected from BBC News, even before the virtual era (which itself was exciting when it came in, I remember watching a feature on Tomorrow's World about it). It did take a bit of getting used to at the time, though.

I still think for all the different versions of it over the last 20 years, that original 1999 music was the best. Particularly the headline bed, much punchier and more urgent than any of the versions that followed.
Last edited by Blake Connolly on 10 May 2019 4:05pm
JK
JKDerry UTV Newsline 10 May 2019 4:43pm
It was weird seeing the actual set in Studio N6. I visited the set in July 2001 and the studio was very small indeed. The two cylinder desks looked big on screen, but actually were small to sit behind. Wide angle lenses on the cameras helped to make the set look bigger on screen.

The backdrop of the newsroom was a proper real view of the BBC News Centre, but one of the directors told us that the backdrop was on a delay. I remember he told us one time Anna Ford was presenting the BBC News at One, but if you looked closely at the newsroom you could see Anna walking down the stairs in the newsroom, as the view was recorded around 30 minutes before it played on screen.

This caused them to just put the backdrop on a shorter delay.
JW
JamesWorldNews STV Central World News 10 May 2019 5:01pm
Some would say it’s the best ever and most recognizable incarnation of BBC News! Twenty years ago today, we swapped the crystal cut glass of the virtual set for the (China) red carpet and creme-caramel backdrop that signaled the arrival of the new look BBC News.


.......oh, got carried away with myself there.
@JamesWorldNews | #StayHomeSaveLives

VMPhil Granada North West Today 10 May 2019 5:06pm
The original look is probably still the best incarnation. Though I admit the later revision of the set to add the red panels looked a little less bland.

Was never really a fan of the clamshell design era… bit too dark IMO.

I liked the 2008 titles but the graphics were a step backwards from what had been introduced just a year before, and they ditched the great North West Tonight titles that were also only a year old.

The fact is the basic idea is still running after all this time and hasn't really aged. They got it right in 1999 and have built upon that ever since.
JW
JamesWorldNews STV Central World News 10 May 2019 5:07pm
Clamshell? 🤔
@JamesWorldNews | #StayHomeSaveLives 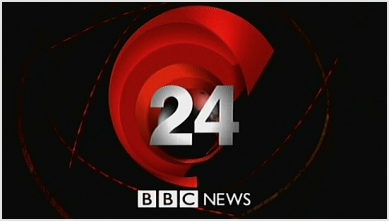 Or am I getting the nickname wrong? Was it called something else on here?
CU
Custard56 (previously Jay Lee) London 10 May 2019 5:21pm
I miss the pacy headline / titles sequences from the original 1999 incarnation. It's bonkers having sequences now which last up to and sometimes even in excess of 2 minutes.
TVF
TV Forum Team 10 May 2019 5:22pm
Posts from 20 years since a new look BBC News have been merged into this topic.

VMPhil Granada North West Today 10 May 2019 5:26pm
Jay Lee posted:
I miss the pacy headline / titles sequences from the original 1999 incarnation. It's bonkers having sequences now which last up to and sometimes even in excess of 2 minutes.

I completely agree. Unfortunately it's something that both the BBC and ITV did in 1999 and don't do now.