ITV have a news special tomorrow from 2pm to 5pm

This means Tipping Point has been AXED!


I was referring to today’s announcement.


ITV had coverage of the PM result during This Morning, they had coverage from 11:45-12:15 with Eamonn & Ruth plus they had two political commentators in the studio and Robert Peston on a live link, before a rushed final segment to finish on time at 12:30. They could have had This Morning finish at 11:35/11:40 and handover to an ITV News special til 12:30, but it’s less disruptive for This Morning to cover it within their slot.
GI
ginnyfan World News 24 July 2019 4:33pm
Funny how BBC World seems to be covering the Mueller's testimony almost equally as the new PM story while CNN Int is fully focused on Boris with occasional short update about Mueller.
BK
bkman1990 UTV Newsline 24 July 2019 5:56pm
Here's the photograph of him meeting the Queen at Buckingham Palace. 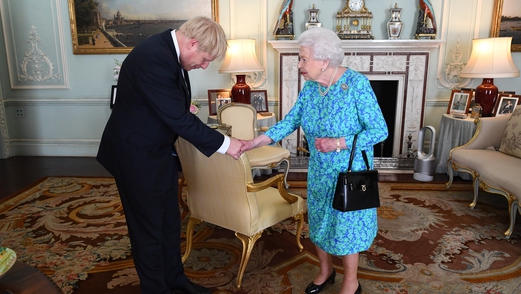 
bkman1990 posted:
Here's the photograph of him meeting the Queen at Buckingham Palace.

You’ve misunderstood the purpose of this forum

dvboy Central (West) Midlands Today 24 July 2019 7:18pm
CNN has Carole Walker with presenters Hala Gorani, Richard Quest struggling with a glockenspiel in the background.
Hello, good evening, and remain indoors.
BK
bkman1990 UTV Newsline 24 July 2019 8:20pm
Andrew posted:
bkman1990 posted:
Leo Varadkar was on RTÉ's Six One news this evening to say that Boris Johnson's intentions for a whole new Brexit deal within weeks or months as not in the real world. Tony Connelly, who is RTÉ Europe Editor, said that there were a few theories going around, that Boris Johnson could be setting up this new government for a snap GE to take place in the Autumn. But with all of the limited time that remains to tick down on the clock hitting the 31st October. Is there a likelihood that Brexit will happen in the UK at all?


bkman1990 posted:
Here's the photograph of him meeting the Queen at Buckingham Palace.

You’ve misunderstood the purpose of this forum


I do honestly try my best to contribute to this forum. It's quite a challenge for me to know what to do or what to say when I'm here.

NewsPres have some presentation from CBSN & CBS Evening News on Boris Johnson win in the leadership contest from yesterday.