This site closed in March 2021 and is now a read-only archive
Previous Next
WH
whoiam989 22 February 2012 4:04pm
jpeg987 posted:
Box Of Toys Audio have been chosen to compose the theme music for SNA,

Eight companies, including composers from Dubai, Beirut and London were briefed to participate in the bid. London based Box of Toys’ original composition best captured the vibrant, contemporary and interactive feel of the channel.

Habib Feghali, Head of Creative, Sky News Arabia, said: “Our aim was always to create a contemporary, young and global sound, which at the same time, speaks to a regional audience – we feel this has been successfully captured with this music.”

Ben Laver, Co CEO and composer, Box of Toys Audio, said: ”We are thrilled to be given the opportunity to craft Sky News Arabia’s sonic identity. As a progressive, multi-platform news experience, Sky News Arabia inspired a contemporary take on a classic vehicle. We layered modern elements against a bold orchestral composition whilst subtly introducing traditional Arab instruments to mark the cultural heart of the channel.”

The musical branding of the channel will reflect Sky News Arabia’s fast, bold, and dynamic style for delivering the best live coverage for news as it happens across the Middle East and North Africa and further afield.


Speaking of music, it seems like the music in the video below is from Sky UK's library. I heard similar music from one of Sky News Australia's promos uploaded by Morpium.

FO
fodg09 22 February 2012 7:34pm
Sky News Arabia's full news website has now launched. Obviously you need to know Arabic to read it but presentationally it looks a lot slicker than the UK site.

Still in a pilot/beta stage, it will apparently evolve as we get closer to the channels launch. The website will have a live stream of SNA.
JP
jpeg987 22 February 2012 7:41pm
fodg09 posted:
Sky News Arabia's full news website has now launched. Obviously you need to know Arabic to read it but presentationally it looks a lot slicker than the UK site.

You can see the rather lovely logo on screen in some of the video reports they have put online,

Looks like the lower third graphics will follow a similar design to the UK ones.
BK
bkman1990 23 February 2012 6:48pm
I have to say, I love the new website so far. This site as I read it; is in the pilot stages at the moment. The glass logo in the videos are very impressive BTW.
WW
WW Update 23 February 2012 8:29pm
whoiam989 posted:

Speaking of music, it seems like the music in the video below is from Sky UK's library. I heard similar music from one of Sky News Australia's promos uploaded by Morpium.

Themes like this one make me regret that orchestral news music has gone largely out of fashion.
FO
fodg09 26 February 2012 6:59pm
Tadhg Enright has tweeted a picture of the studio, a bit blurry but its looking very well. 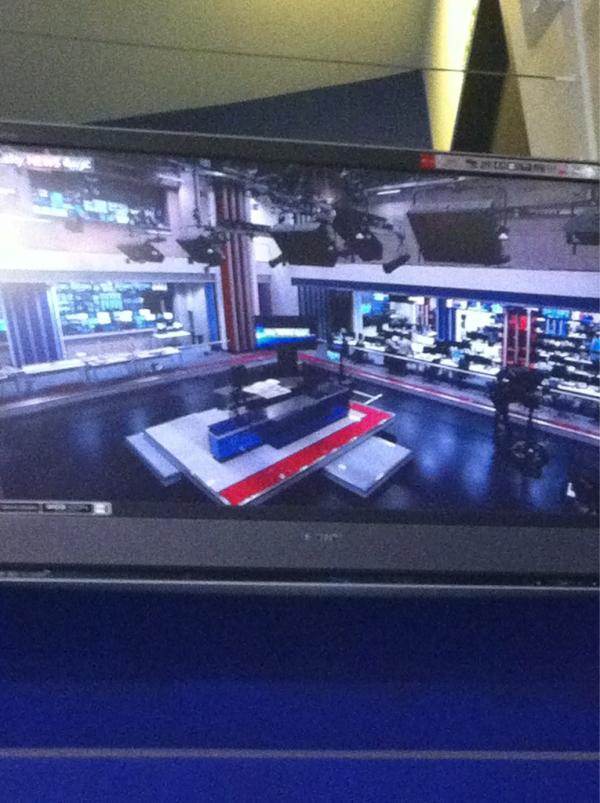 JO
Joshua 26 February 2012 7:07pm
Wow, the artist impressions were amazing, and its even better in reality. Brilliant set, it looks huge!
TH
Thomas 26 February 2012 8:01pm
And that's only a part of the set - it's going to blow Sky News UK out of the water when it launches. Looks nearly exactly the same as the computer design, which is an achievement too.
BK
bkman1990 26 February 2012 11:15pm
Oh, what a great set. The bigger the set, the better.

FO
fodg09 7 March 2012 7:50pm
The set looks absolutely sensational in these latest pictures, it should look fantastic on the HD channel. They have made great use of what is actually quite a small space.

The desk is certainly an interesting design.. 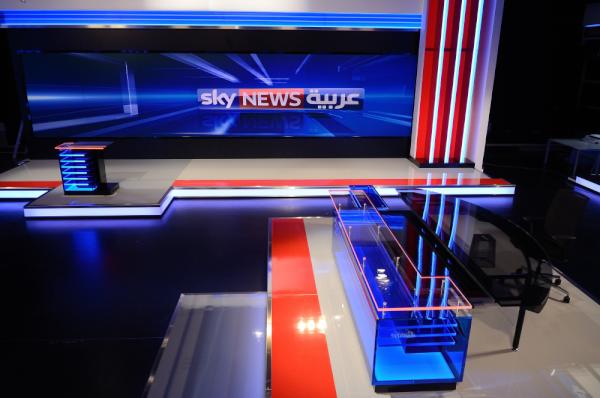 https://twitter.com/#!/AhmedKhalidSKY/status/177480411499331585/photo/1
CR
Critique 7 March 2012 8:05pm
All looks lovely, apart from the minor change in desk. The one in the mock-up was square, rather than a semi-circle thing. Otherwise, though, it's absolutely brilliant!
BR
Brekkie 7 March 2012 8:56pm
So it's basically a version of the Sky News UK set minus the curves - but looks great. Sky UK could do really with ripping out their set now - it's been seven years and was built for different requirements to what Sky News have now.