US Shooting on News channels

This site closed in March 2021 and is now a read-only archive
Previous Next
GI
ginnyfan 4 December 2015 7:27pm
Some clips here

http://crooksandliars.com/2015/12/why-hell-nbc-doing-inside-attackers
SC
scottishtv Founding member 4 December 2015 11:34pm
Felt uneasy watching Jon Sopel being part of this on the BBC News at Ten. He claimed they were there with the permission of the landlord and the police.

Still doesn't seem right.
BR
Brekkie 4 December 2015 11:55pm
The thing is it adds absolutely nothing to the original story. There was nothing in there newsworthy at all - if there was the police would have already removed it.
MO
Mouseboy33 5 December 2015 2:46am
I was shocked as well. Its interesting that all the media made it into a free-for-all. MSNBC being the worst. Picking up IDs and showing it to the camera. I also noticed during the mid-morning San Bernardino Police presser, BBC World News broadcast live pics from inside the house. Before the plywood was removed from the door they waited outside with the rest of the media. Sky News followed suit as did some other global broadcasters. The killers families should have been the first ones into that house, not the worlds media and certainly not picking through drawers and papers and touching their belongings, showing piccys of their innocent baby. As was someone said the whole plane/SkyNews/luggage situation should have been the teaching moment. The FBI cleared the residence from their control and the FBI left behind, as law states, a list of property that has been seized. The landlord has to bear some responsibility for stupidly allowing them inside. Before they went in, i heard it mentioned that tabloid,syndicated newsmagazine INSIDE EDITION had contacted the landlord and I think maybe they thought they were going to get an exclusive story and it turned into a circus. http://www.insideedition.com/headlines/13383-see-inside-the-home-where-killers-planned-their-deadly-massacre If you notice their camera is right up from with the landlord when the board was removed from the door and they were seemingly shown around by the landlord.

What was crazy as it was happening the anchors/presenters in the studios were all kind confused and you could feel the collective shock that they were all involved in the madness. Even the still photographers....from venerated publications such as the NY Times.

The nutty part of this whole thing is, they all tried to justify their actions and say they were allow by the landlord into the house and CNN and others claimed, unlike MSNBC, they didnt broadcast anything sensitive such as ID and stuff like that. It still was a bad day for the worlds media. Made them all look bad. And as Brekkie said it added nothing to the story at all. It felt wrong. I cant find the tweet now but as it was happening, someone had pullled up some CA statutes that stated if the residents had died the only that should have been allowed into the property was the landlord. So will there be fall-out from this remains to be seen. 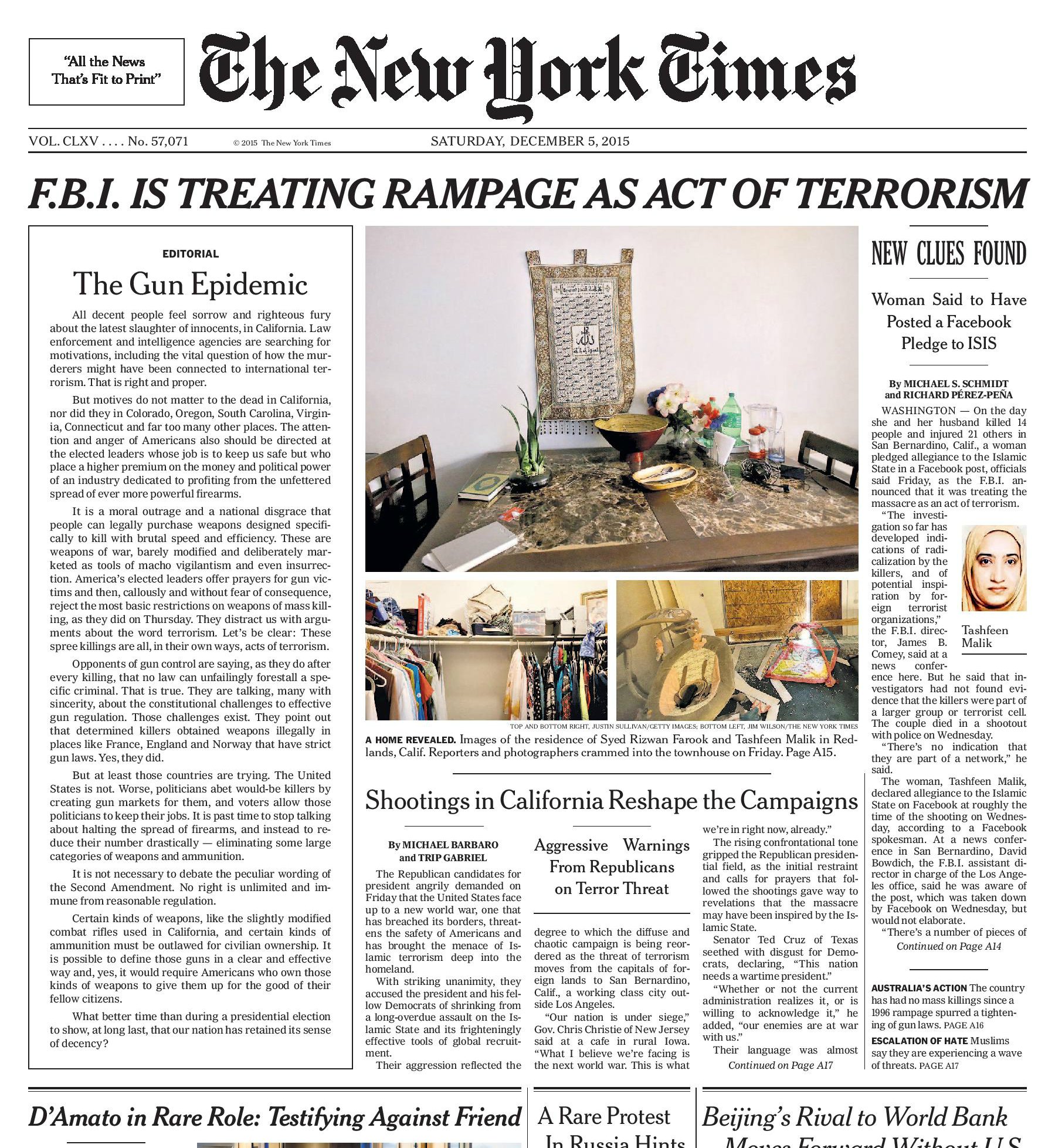 Last edited by Mouseboy33 on 5 December 2015 3:02am - 3 times in total
ST
stuartfanning 5 December 2015 12:36pm
MSNBC and their reporter Kerry Sanders have been censured by their peers over their live coverage in the suspects apartment.

Luckily for MSNBC nobody taped their live broadcast and uploaded it uncut on YouTube!!

https://www.youtube.com/watch?v=9TwSJ7lab88
Last edited by stuartfanning on 5 December 2015 12:52pm
IN
Independent 8 December 2015 9:26pm
Mouseboy33 posted:
Not liking how all of the media rushed into the terrorists flat after it had been cleared by the FBI. They walked through the flat broadcasting live pictures of their belongings. TMI. Just feels weird to me.

Sorry to bring this up again. I just wanted to add media entering and looking around the residences of terrorists or criminals is nothing new. It's the whole scrambling to get in first at the same time, doing it live and touching and rummaging through belongings that's the problem. Compare what happened last week with this:

https://www.youtube.com/watch?v=xB6w5WBrO5w
You're not going to see any outcry over how things were done in the link.