US Shooting on News channels

This site closed in March 2021 and is now a read-only archive
Previous Next
WW
WW Update 3 December 2015 1:27pm
NYTV posted:
bilky asko posted:
Mouseboy33 posted:
The BBC NC cant decide what to call the city where this is happening. The lowerthird says SAN BERNADINO and the LIVE flag says SAN BERNARDINO. And presenter is mispronouncing it. Its pronounced San Berna-deeno and spelled San Bernardino.

"Los Angel-iis" is the Spanish pronunciation and "Loss Angeliss" is the American English one.


No, the Spanish pronunciation is Los Ahn-hel-es. "Los An-gel-eez" is the archaic English pronunciation, sometimes still heard in the UK and Australia, but never in Los Angeles itself.
Last edited by WW Update on 3 December 2015 1:48pm - 2 times in total
DV
dvboy 3 December 2015 4:33pm
If the presenter hadn't corrected herself would many people really have noticed?
BR
Brekkie 3 December 2015 5:34pm
So woman gets caught up in shooting, hides in a closet and rings her father. Father then decides it's a good idea to tell the local media who then decide it's a good idea to broadcast to the world that a woman has called someone to say they're hiding in a closet. The US media really don't care about the potential consequences of their coverage at all in cases like this - so much less respectful than recent (thankfully relatively rare) events in Europe.
DA
davidhorman 3 December 2015 5:58pm
Yes, I'm sure you'd never see any European news outlet doing something so reckless.

Still, at least in that case you could say it was an unprecedented situation then. Sadly can't make that excuse in America.
BR
Brekkie 3 December 2015 6:17pm
And they'd clearly learned from it with recent coverage. US networks should know better.

That said if your sister is telling the media your whereabouts it is probably her you should be suing.
NY
NYTV 3 December 2015 8:59pm
james-2001 posted:
Americans should learn to pronounce Birmingham and Nottingham correctly before they comment on how others pronounce Los Angeles

I know how to say Norwich, does that count?

BR
Brekkie 3 December 2015 9:07pm
NYTV posted:
james-2001 posted:
Americans should learn to pronounce Birmingham and Nottingham correctly before they comment on how others pronounce Los Angeles

I know how to say Norwich, does that count?

Only if you can do it in a thick Norfolk accent.
MO
Mouseboy33 4 December 2015 6:11pm
Not liking how all of the media rushed into the terrorists flat after it had been cleared by the FBI. They walked through the flat broadcasting live pictures of their belongings. TMI. Just feels weird to me. 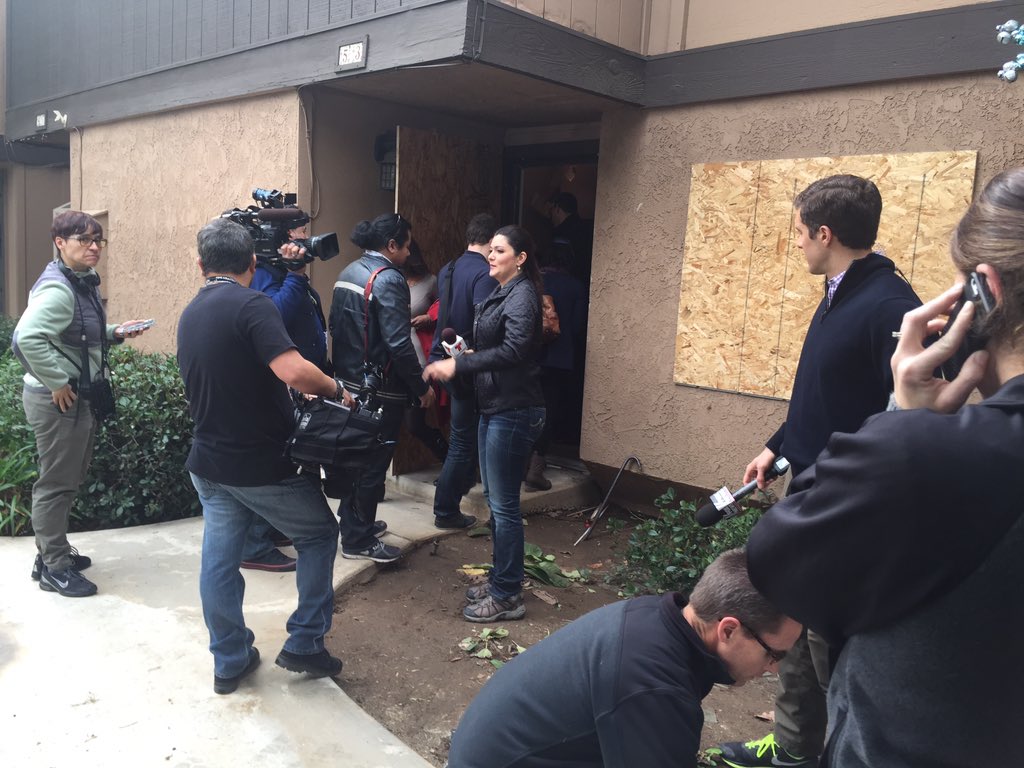 ITV news
IN
Independent 4 December 2015 6:17pm
Apparently nothing was learned from MH17.
CA
Cando 4 December 2015 7:10pm
So much pearl clutching....
Imagine if Kay Burley was there

GI
ginnyfan 4 December 2015 7:16pm
One of the most bizarre things I've ever seen on news channels/media. CNN and MSNBC had reporters live on video from the house showing us stuff from papers and various documents to baby toys, kitchen furniture and even what's in the fridge. Needless to say it all got a huge backlash on Twitter. One of CNN's contributors in the studio was literally shaking in anger, saying they are contaminating a crime scene and could not believe what was happening.

http://www.adweek.com/tvnewser/media-search-of-suspects-apartment-raises-questions/278917
http://www.vanityfair.com/news/2015/12/live-tv-san-bernardino-shooter-apartment?mbid=social_twitter
http://www.adweek.com/tvnewser/networks-apartment-search-live-mocked-on-twitter/278938
BR
Brekkie 4 December 2015 7:23pm
Strange strange scenes - and even stranger that the police didn't keep it in lockdown for more than 24 hours.