Nick Owen and Simon McCoy, got to be the dream pairing.

Steve in Pudsey Yorkshire Look North (Yorkshire) 26 September 2019 4:29pm
And the other Nick Owen on Nationwide from Brum?

Edit: or was it that Nick Owen co presenting?
Write that down in your copybook now.
BA
Ballyboy UTV Newsline 26 September 2019 4:38pm
I thought news nationwide was after sport sorry just got home

Edit: or was it that Nick Owen co presenting?

No Nationwide or business news on Afternoon Live

Any talk of " Nick Owen", I would always assume means the latter.

EDIT: Plus, it seems logical to assume that it would be the BBC Birmingham stalwart presenting from such a firmly Midlands Today territory as Stoke-on-Trent.
Last edited by Lou Scannon on 26 September 2019 8:08pm


Write that down in your copybook now.
LS
Lou Scannon West Country (East) Points West 26 September 2019 9:59pm
I did say "generally" (as opposed to exclusively), mind...

MW
Mike W London London 6 November 2019 2:32am
If you ever wondered what happened to the old Midlands Today sofa and desk....

It appeares they've been sent to BBC Wood Norton (found this during my search for whoever made TV sofas...)
Last edited by Mike W on 6 November 2019 2:39am
DE
deejay Oxford 6 November 2019 1:19pm
Quite a lot of ex BBC Birmingham sets end up at Wood Norton. For those who don’t know, it’s the BBC training centre. There are three television studios, the picture above is Studio A. Studio B is just through the darkish corridor with the ladders propped up (top right) and (last time I was there) also had an old Midlands a Today set in it. Studio C is behind the photographers camera position, across a corridor. They are all different sizes and have different lighting equipment but share cameras so it’s not quite as extravagant as it might seem. A has motorised lighting barrels that drop to the floor. B is a small news style studio and is where regional types practice lighting news sets and fixed positions. C is light entertainment style studio and has manual pantograph lighting fixtures which are dragged around and adjusted via poles.

Studio A was used on air several years ago for a cbbc show though I can’t remember what it was called. There was, last time I was there, still a green blobs cbbc sign outside.
Two minutes regions...
DE
deejay Oxford 6 November 2019 2:24pm
And here’s the blob sign - which in this photo clearly shows the blobs covering up a very old BBC tv logo! 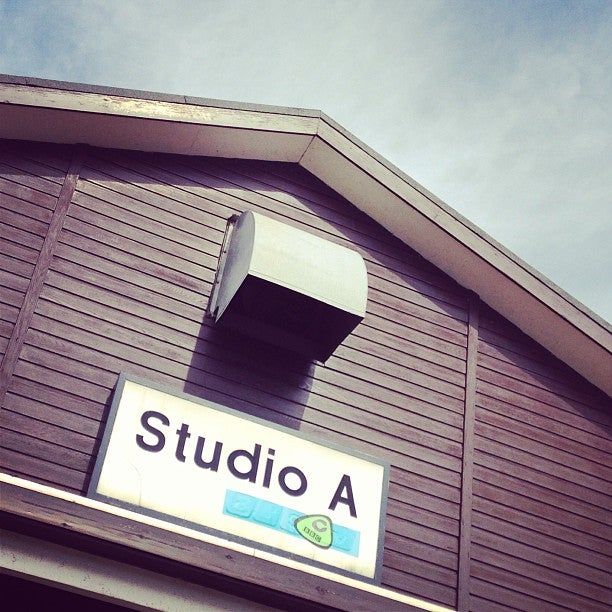