FrancesC 16 October 2020 2:41pm
AlfieMulcahy posted:
Hi, Sorry if people have said this before but what is the difference between:

Do they share programmes? Are they all for the same target audience?


NBC is one of the “big three” American terrestrial networks (CBS, NBC, ABC). Programming is generally entertainment focused similar to ITV, but out of the three networks NBC is known to be slightly upmarket with regards to its traditional focus on innovative comedy and grittier dramas, though this is less distinct than it had been. CBS is more lowest-common-denominator and ABC is soapy/family/diversity oriented as of late. NBC News is known to have more of a political analysis / East Coast outlook compared to the other networks.

MSNBC is a rolling pay-tv news channel launched in 1996 alongside Microsoft, which is no longer involved. It has evolved into rolling news during the day and left-wing commentary in the evening, though it does a better job than Fox News in separating them out. NBC News is kept slightly at arms length from MSNBC, though there is shared talent.

CNBC is a pay-tv financial news channel, definitely Wall Street oriented and very technical so it is not very accessible to those not following the markets. Not many resources are shared with NBC News. At night they’ve recently been airing reality programming with a business bent, but they’ve introduced news programming with Shepard Smith that draws more from the NBC News talent pool, without MSNBC’s progressive advocacy.

MSNBC is still nothing more than Fox News for American liberals.

That's just not true. In terms of political leaning yes, but in terms of quality of journalism and ethics they're miles apart.

(MS)NBC is like the other news outlets in that it actually does do proper news with actual journalism. When there is a story they'll report it no matter what or who it's about. Fox doesn't, it reports only what's convenient for its audience to know


Sorry, I'll have to disagree. Left-leaning media is just as bad as right-wing media. it's infotainment for those in their own bubble for which MSNBC is just as irresponsible as Fox News. They may not 'lie' as Fox does, but it's all about reaffirming the audience's own bias rather than informing. You're not going to get a left-leaning AOC type watching Fox News in the same way you're not going to get a mask denying Trump supporter watching MSNBC (or anything they consider MSM).

The only NBC produced news output that is anywhere considered impartial are the network bulletins and Shep's hour on CNBC.


POLITICO is saying that there is an internal feud between NBC News and MSNBC.

Quote:
The internal conflict extends to the highest levels of NBCUniversal, where MSNBC head Phil Griffin strongly disagreed with NBC News President Noah Oppenheim’s decision to unilaterally move forward with the town hall during that time slot, according to three high-ranking sources at the TV media giant.

Griffin and Oppenheim have been increasingly at loggerheads over the way the two networks present their news, with MSNBC moving more leftward in its commentary while NBC News tries to maintain a more traditional down-the-middle approach, the sources said.

“Each side thinks the other is ruining the other‘s brand, and this just ripped it open,” said one of the sources.

Quote:
Well, that happened. Let me remind you that what you just saw was a production of NBC News. We are MSNBC. We did not produce that event. We simulcast it here with along with CNBC.


But lots of MSNBC programmes are now using the NBC News brand, including MSNBC Live, Morning Joe and Dateline White House… Brian Williams on the 11th Hours always says “Good evening from our NBC News headquarters here in New York”.
Last edited by FrancesC on 16 October 2020 2:45pm
BR
Brekkie Wales Wales Today 16 October 2020 8:36pm
Inspector Sands posted:
NBC are getting a bit of stick at the moment for scheduling Trump's 'town hall' at the same time as Biden's on ABC

Well the inevitable happened and Biden outrated Trump by 14.1m to 13m.


This is no surprise to me because there has been a long ongoing feud between MSNBC and NBC News for a number of years now. As MSNBC went more progressive in the mid to late 2000s, this caused some ructions between the MSNBC division and the network news division, and it's just progressed from there. It's not been helped by the corporate decision, to link the NBC News brand with the MSNBC brand which if memory serves was back in 2014 or 2015.

MSNBC is a very different operation from the main NBC News operation, and is also very different from the CNBC operation. I'm not sure that having them all under NBC News is wise, or even really a good idea. They should all be affiliated with each other, but having them all under the NBC News Group, feels like a potential recipe for disaster.
CH
Charles World News 16 October 2020 11:27pm
cityprod posted:
It's not been helped by the corporate decision, to link the NBC News brand with the MSNBC brand which if memory serves was back in 2014 or 2015.


That was a result of Andy Lack returning to the network as president. He led NBC News (and MSNBC) in its glory days in the 90s, and he was brought back in an attempt to rectify some of the missteps following the Brian Williams fiasco. Andy Lack wanted to move MSNBC back into more of a down-the-middle network, so the dayside hours started to feel a little newsier. The NBC News brand started appearing more prominently on MSNBC, and there was speculation that the channel would be renamed. He also made some puzzling decisions like hiring Greta Van Susteren and putting Brian Williams on at 11pm. A lot of the progressive faces on MSNBC were sidelined at that time, including Al Sharpton, who had a daily show, and Joy Reid.

Now, with Lack gone, MSNBC feels somewhat adrift, and I believe the ratings reflect that as well. They recently rejiggered the schedule again to go more opinion and politics heavy again, though there are some indications that NBCUniversal's new chair is displeased with MSNBC's reliance on politics.

Mouseboy33 21 October 2020 3:37pm
There are more pictures of the new NBC News DC Bureau. Apparently there are also groundfloor studios in addition to the upper 5 floors NBC has taken over in the rest of the building . Um I will reserve my final judgement until its in use and lit...but i really dont like this. This is quite unusual for NBC News. I dont know how this got approved. But I dont like the tv drama set-like feel to it. I not sure who thought this was a good idea. I would have preferred they did something in line with the existing NBC News sets. Strange IMO.

Quote:
I have updates on the space before it launches (which I assume to be two weeks from today). As reported, NBC has five floors is the building with a newsroom and small studio on the street level, both of which can easily be seen from the street.
The pictures attached (or below) show the view through the windows. I recognize they aren't all the high quality (except the one from NewscastStudio). To familiarize yourself with the space, it is on a street corner. When looking down the rows of chairs/desks with the tvs at the end, the studio will be behind you.
In the studio, you'll see the US Capital, but that is a video wall. However, the window I took that photo through, has an actual view of the Capital building.
There's also two shots of an adjacent conference room. 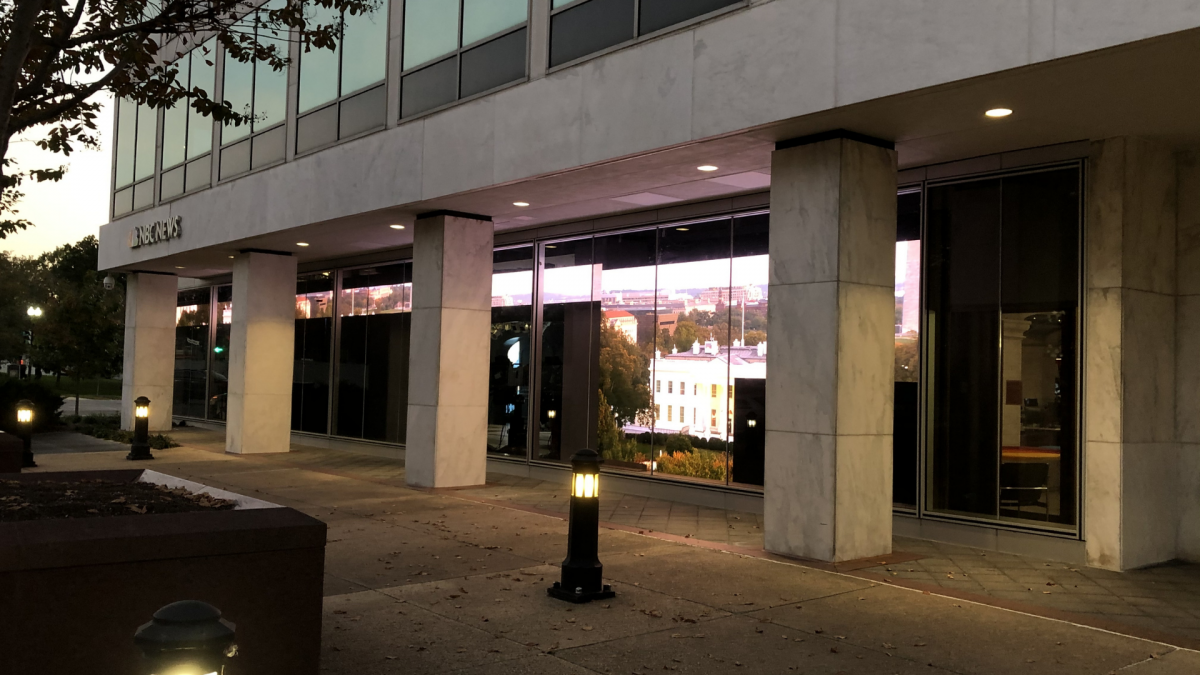 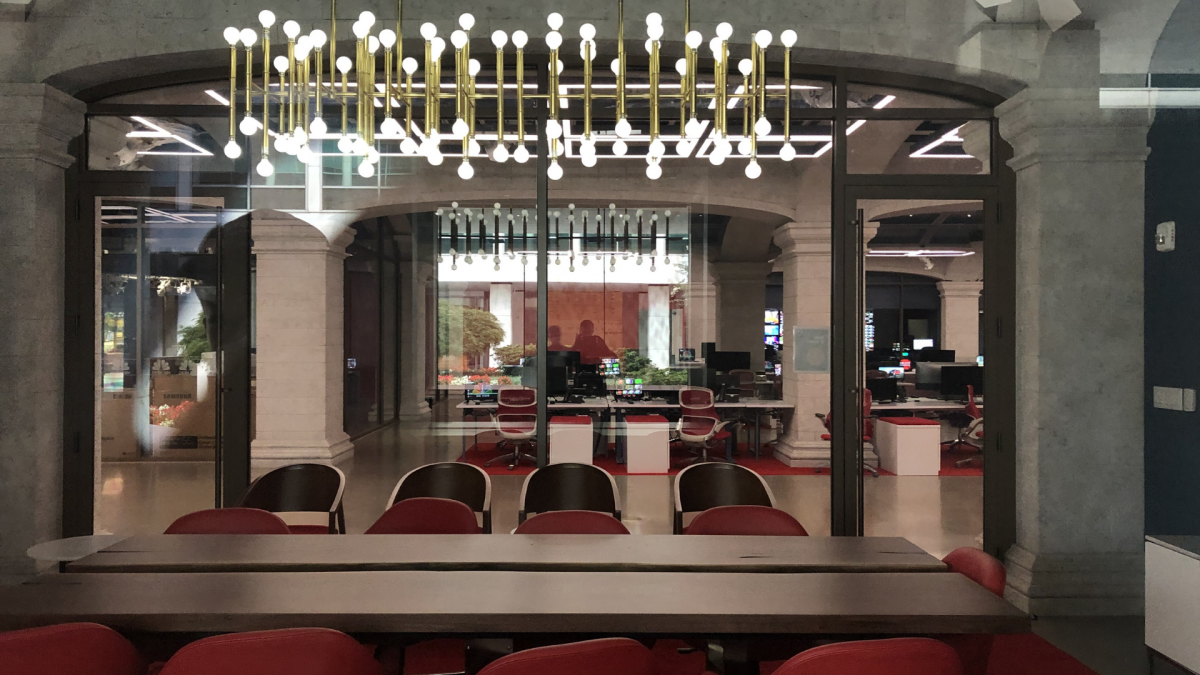 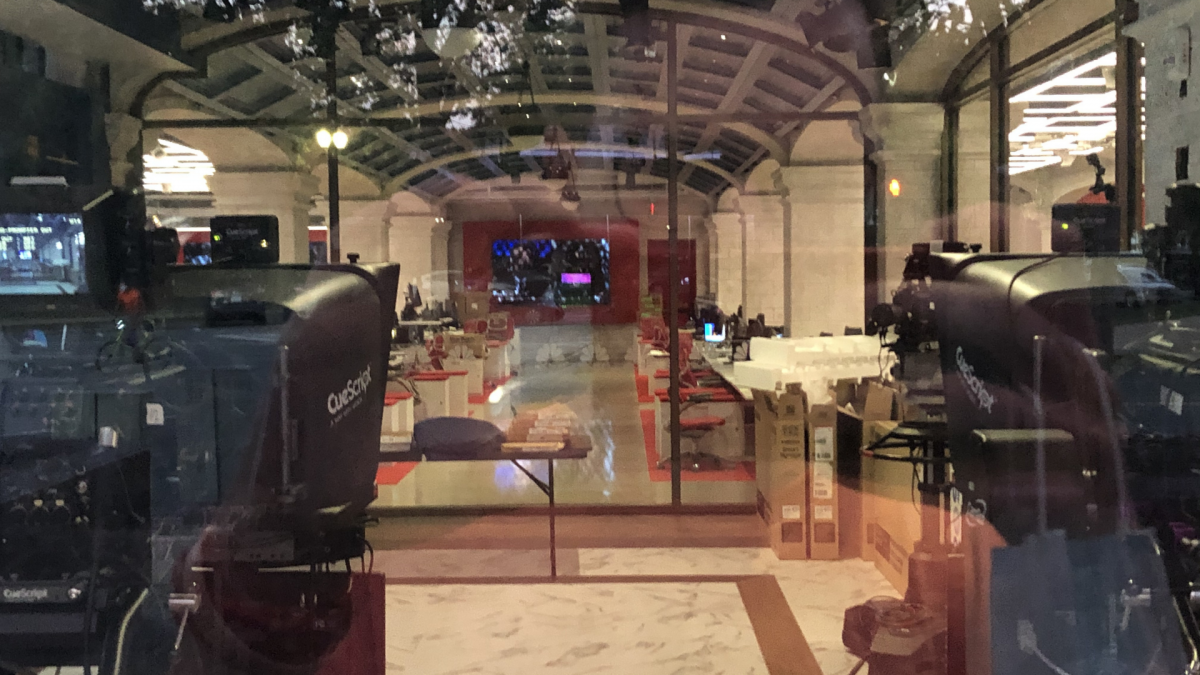 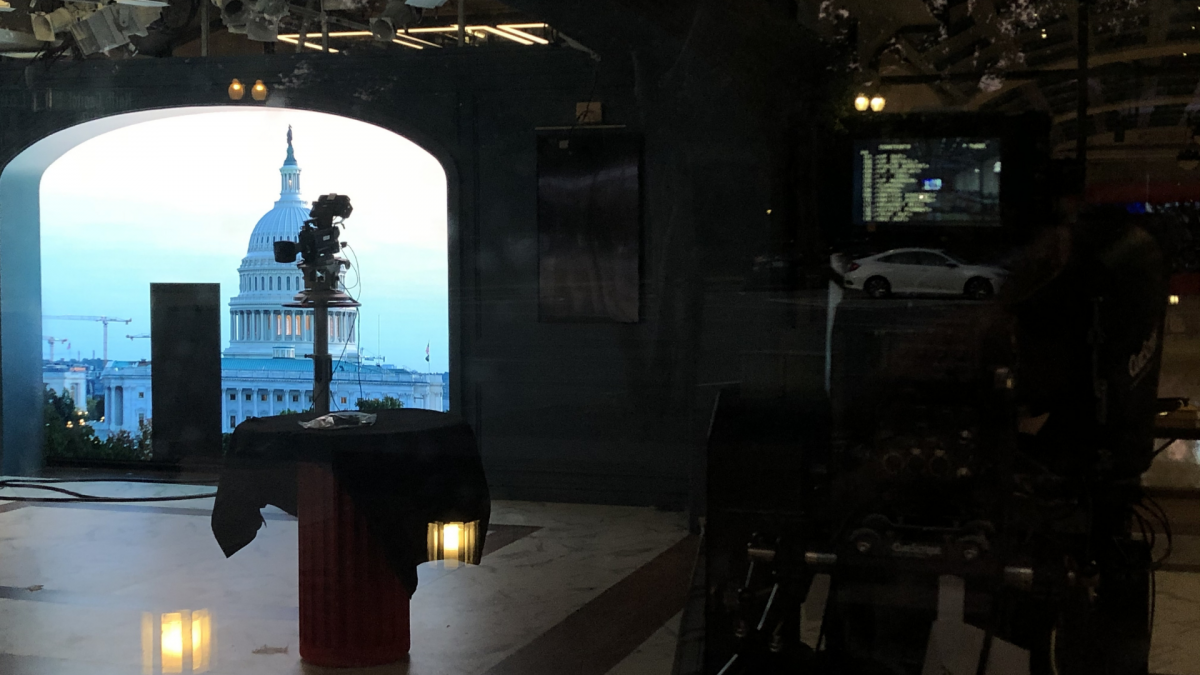 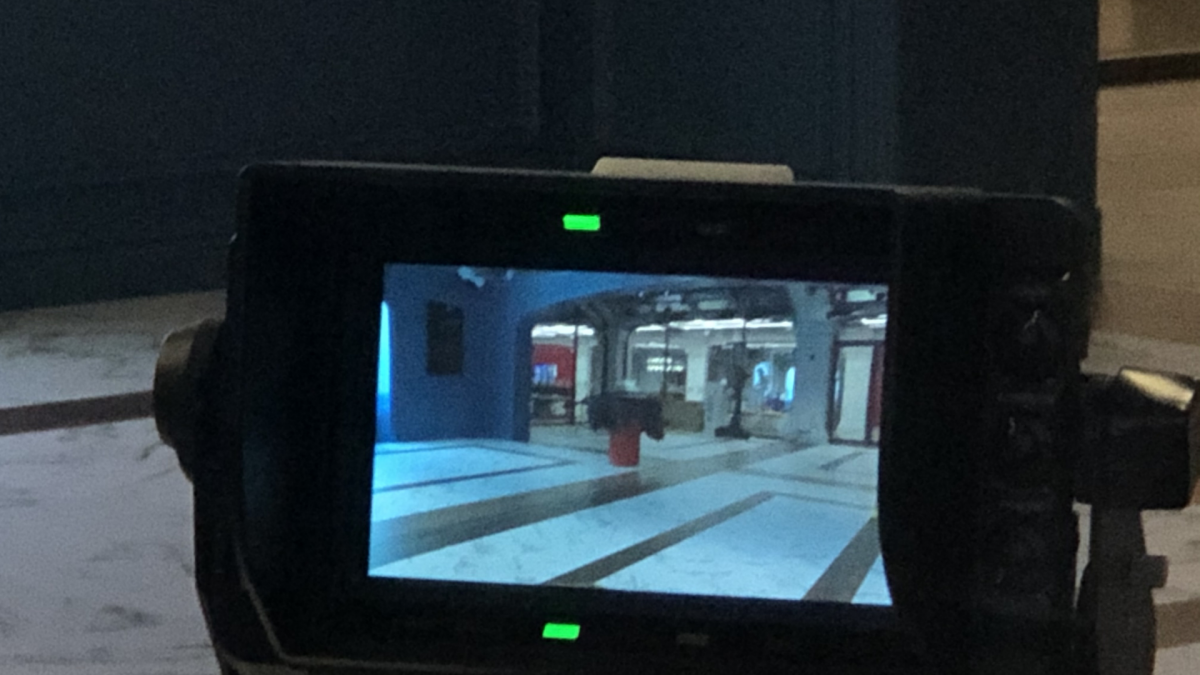 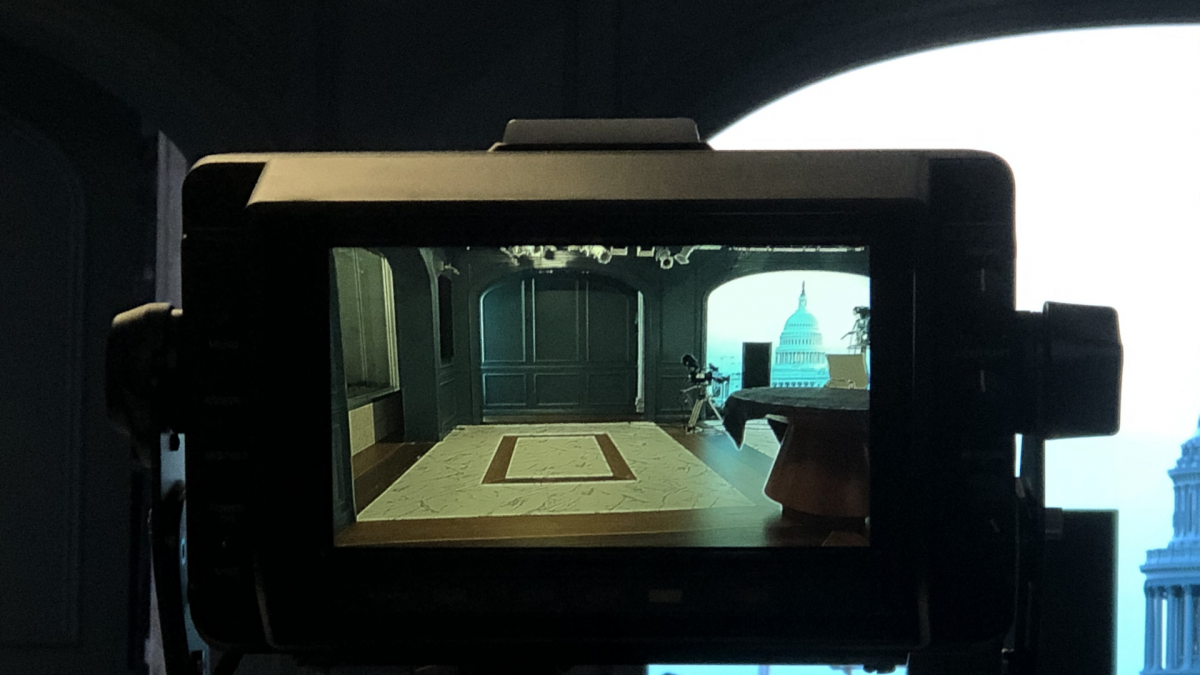 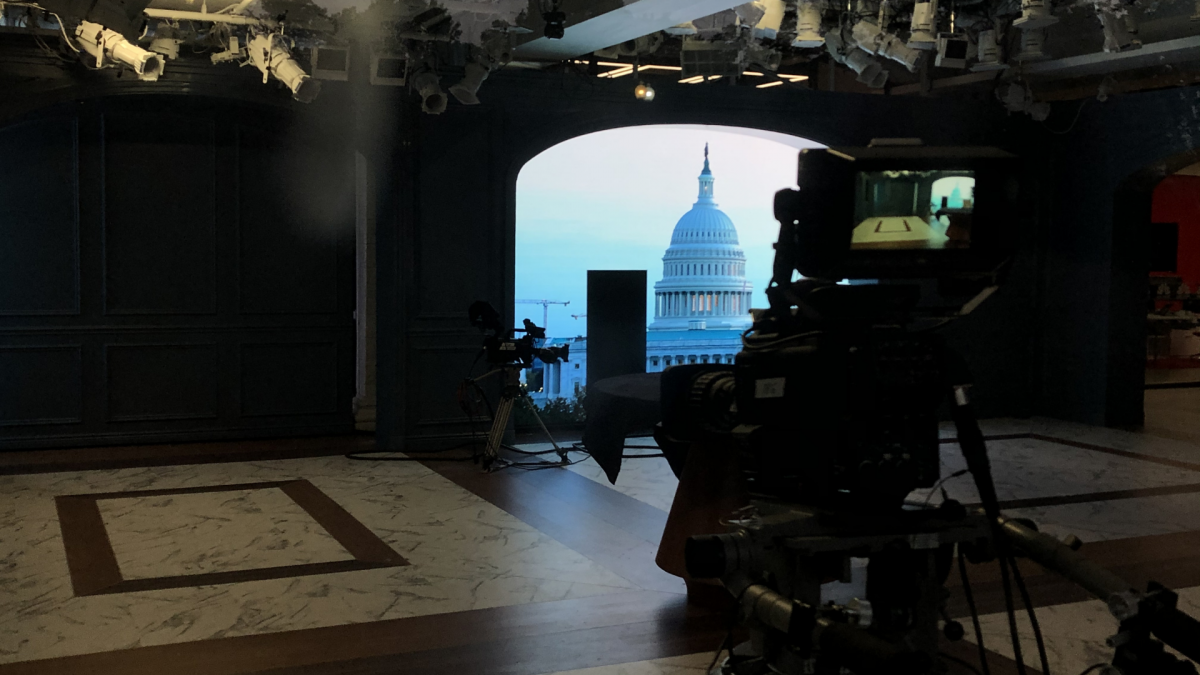 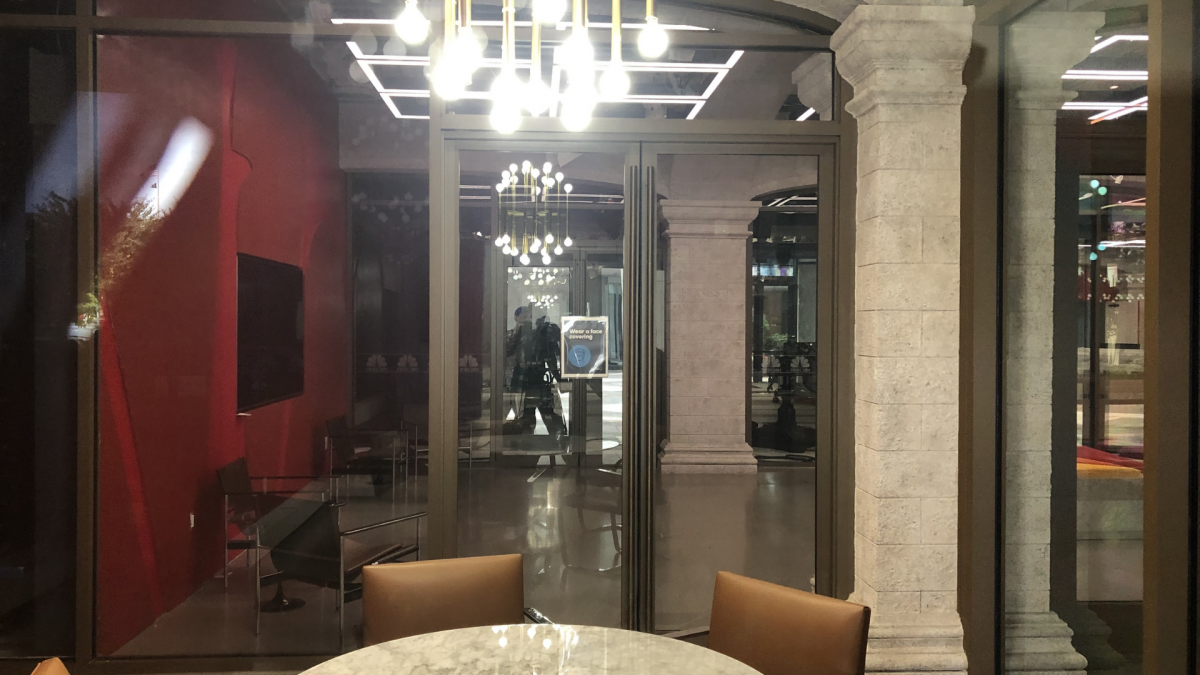 TVNewsTalk
I'm here to give you something to talk about! You're Welcome.
https://youtu.be/1g18oiI2WIU
RK
Rkolsen World News 21 October 2020 7:08pm
Trust me mouseboy, it doesn’t look better lit up.
Don’t let anyone treat you like you’re a VO/SOT when you’re a PKG.

When it was first installed people joked it was a left over SNL set.

Oh an those arches around the video wall and windows are a deep blue. Almost seems like an office designated designed the set.
Don’t let anyone treat you like you’re a VO/SOT when you’re a PKG.

rob Founding member Meridian (Thames Valley) South Today 22 October 2020 3:55am
Mouseboy33 posted:
I think it must be said....and I hate to say it.....this has to be the biggest set disasters in recent years I've ever seen from NBC. They are usually near flawless when it comes to set design, but also graphics and lighting. Ive never seen them do anything close to this bad. Its a defo a head scratcher. They usually leave the cheesy crap to ABC or CBS. This seems strangely out of character for NBC News creatives.


For goodness sake... you haven't seen it yet, let alone on-air!

Also, does it look like a Tesco Extra?
TV Live - The home of TV presentation.

Mouseboy33 22 October 2020 5:21am
rob posted:
Mouseboy33 posted:
I think it must be said....and I hate to say it.....this has to be the biggest set disasters in recent years I've ever seen from NBC. They are usually near flawless when it comes to set design, but also graphics and lighting. Ive never seen them do anything close to this bad. Its a defo a head scratcher. They usually leave the cheesy crap to ABC or CBS. This seems strangely out of character for NBC News creatives.


For goodness sake... you haven't seen it yet, let alone on-air!

No it doesnt look like a Tesco Extra. SkyNews already has the long term lease on it.

I'm here to give you something to talk about! You're Welcome.
https://youtu.be/1g18oiI2WIU

Mouseboy33 28 October 2020 6:28pm
Now we have a clearer picture of NBC News plans for their new bureau. So the street level area and news room is for Meet The Press and the bureau on the 7th floor will feature prominently on NBC News and MSNBC. The 7th Floor newsroom has the usual NBC News flair and clean bright design. And of course it had NBC's nearly flawless lighting design. I really like it compared to the dark cave their occupied previously. They seemingly regulated Meet the Press to the 1st Floor crypt/dungeon/subway platform.
TVNewstalk - (freelandproducer) 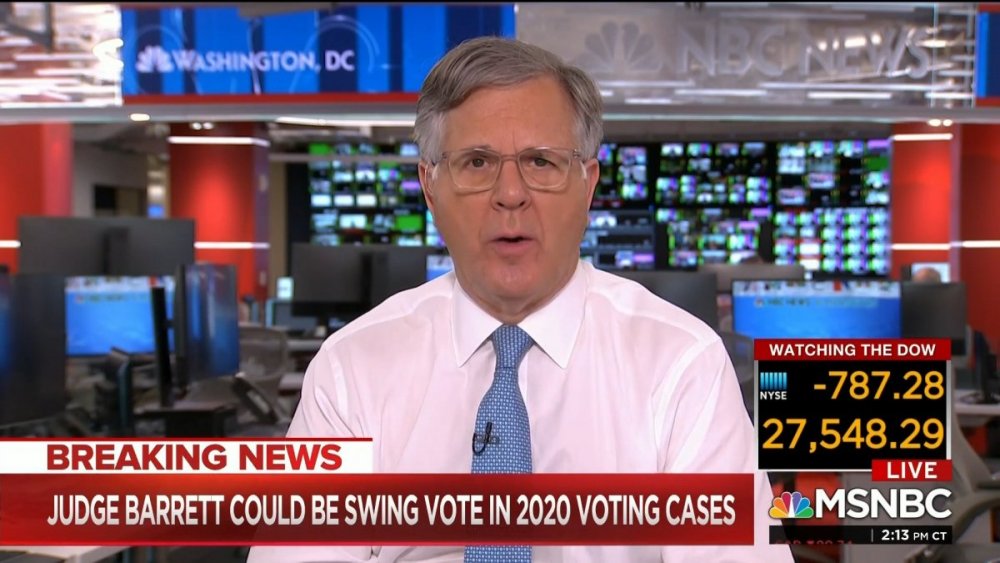 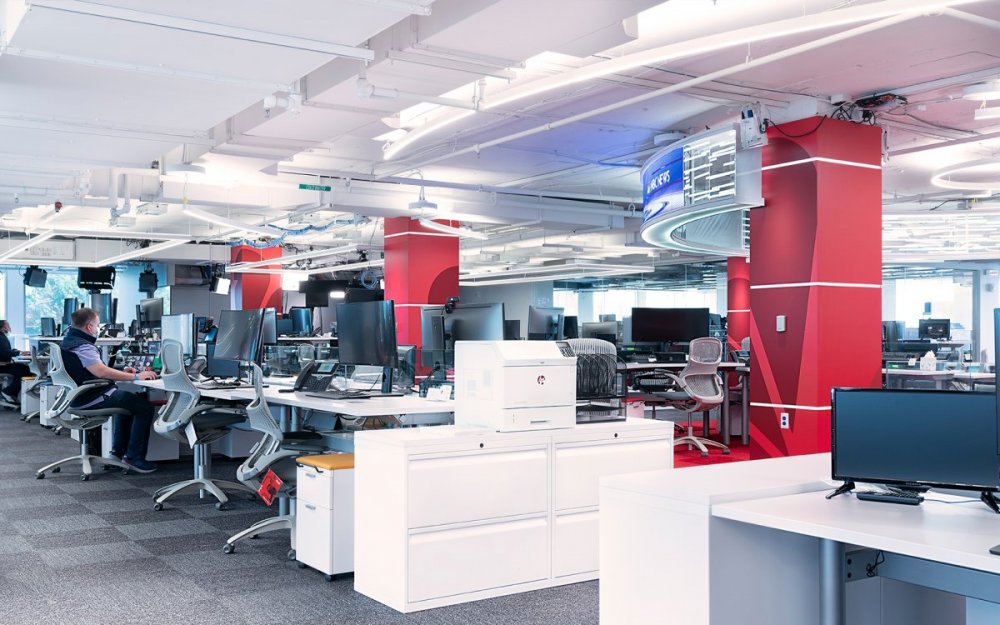 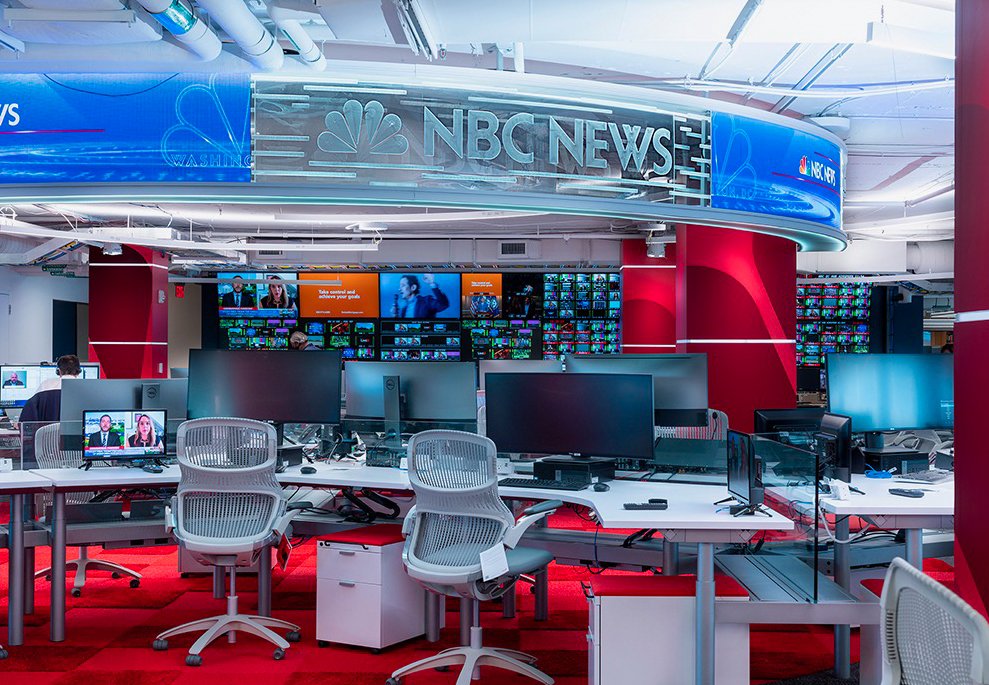 Here is the previous flashcam position for comparison. 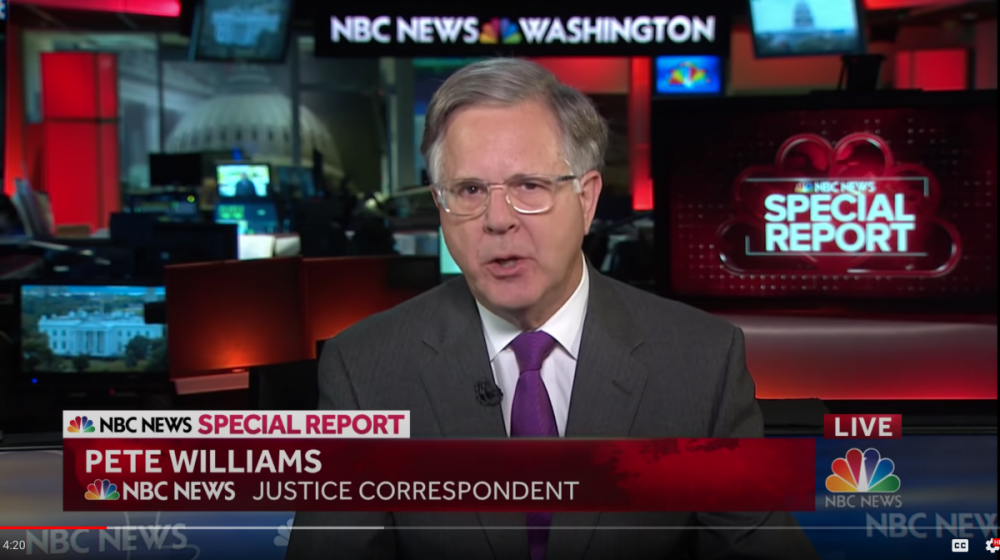