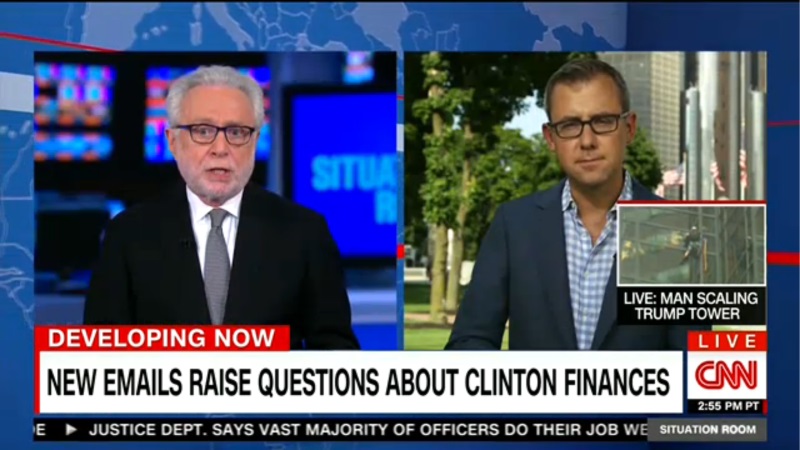 EDIT: Yet another OTT screen layout:

https://www.facebook.com/ABC7NY
SC
scottishtv Founding member 10 August 2016 11:43pm
CNN's "law enforcement expert" Shimon Prokupecz, stating several times that the police will not try to grab the climber or bring him in, claiming they will let him tire himself out and they will negotiate with him. "This is what they do. I've seen this happen so many times before".

Then they grabbed him and brought him into the building. Haha.
RK
Rkolsen 11 August 2016 5:09am
WW Update posted:
623058 posted:
What a non news story the guy cant even get up one floor.... what would be more interesting if CNN reported on this little know fact... https://www.youtube.com/watch?v=pOQ8-cZdO5M


The story was widely reported at the time (2008). Besides, what does it have to do with anything?


First off I will say that I'm a Hillary supporter but her remarks weren't inciting anyone to do anything. HIllary stated that she planned on running through the summer claiming that her husband didn't clinch the nomination until June and she said "we all remember Bobby Kennedy was assassinated in June in California." The comment was in extremely poor taste. Compare that to Mr. Trump's were kind of a suggestion when he said "If she gets to pick her judges, nothing you can do, folks. Although the Second Amendment people — maybe there is, I don’t know.”
MO
Mouseboy33 11 August 2016 5:08pm
Turns out he is a Trump Supporter....well according to the video he posted a few days ago.
Now sitting in Bellview awaiting a mental evaluation.