LBC is launching a brand new schedule for the autumn, packed with big-name presenters and agenda setting programmes.


It seems as part of this new schedule that LBC is being video streamed live online by the looks of things.
steve
steviegTVreturns

London Lite Founding member London London 9 September 2020 4:29pm
Not mentioned is that veteran presenter Clive Bull is moving to weekend overnights to make way for these new political celeb shows.
HC
Hatton Cross Central (West) Midlands Today 9 September 2020 4:43pm
And the (rare in this day and age) dropping of a pre-recorded programme, Steve Allen's In Conversation With.. for a live programme.

Nothing to do with the fact that Times Radio is in pre-recorded best of's on weekend evenings, when LBC is now doing more live programmes in the new schedule at the same time..
Packing my boxes up here on TV Forum, and getting the roadmaps out to find my way over to TV Live from Thursday April 1st

He's not done overnights for a while. Possibly that slot will be more his sort of thing than his current ones

This is him on overnights in the early 90s 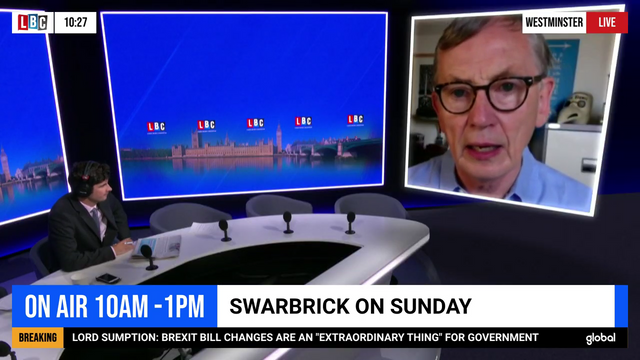 623058 posted:
boogy men new stuff is coming to get us
LO
Londoner London London 13 September 2020 11:49pm
According to Iain Dale the studio is at 4 Millbank (with the other broadcasters) not Millbank Tower (which is nearer Tate Britain, and further from Parliament) as previously reported.

There are two sets in the studio - the one we see pictured above, plus another set for one-on-one interviews.

The studio was due to make its debut in March - but the launch was delayed for obvious reasons.
Last edited by Londoner on 14 September 2020 12:09am - 2 times in total
623058 posted:
boogy men new stuff is coming to get us

In other news, LBC’s US election coverage will come from the Millbank tv-style studio with autocue, according to Iain Dale who is co-hosting with Shelagh Fogarty
623058 posted:
boogy men new stuff is coming to get us

In other news, LBC’s US election coverage will come from the Millbank tv-style studio with autocue, according to Iain Dale who is co-hosting with Shelagh Fogarty


Wow. Seems longer than that. I really enjoy it as a station.

The plan for election night sounds good. I love the way that studio turned out. Have we got any news on scheduling for the night yet?
Hello, I'm using WhatsApp
BB
BBI45 Central (East) East Midlands Today 28 October 2020 10:59am
AlfieMulcahy posted:
Wow. Seems longer than that. I really enjoy it as a station.

Martin Stanford just acknowledged the station's birthday. I'm sure most people will agree that the station launched at the right time.

EDIT: I'm now thinking back to this time last year. I remember staying in Newquay and trying to find a spot in the caravan where I could get a signal.
Last edited by BBI45 on 28 October 2020 11:15am
First person to post in 2021!
LO
Londoner London London 3 November 2020 10:03pm
Here's the America Decides live stream: