DVB Cornwall West Country (West) Spotlight 24 April 2020 9:44pm
BBC Parliament will air the full coverage of the 2010 General Election to mark its 10-year anniversary this month.
The election brought an end to Gordon Brown's time in office and led to David Cameron taking over as Prime Minister after his Conservative party agreed to form a coalition government with the Liberal Democrats.

The BBC's coverage of election night, anchored by David Dimbleby, will re-air in real time on BBC Parliament on Friday, May 8.

dvboy Central (West) Midlands Today 24 April 2020 10:56pm
I think this was announced a couple of days ago...
Disappointed they are only showing the first 13 hours of coverage given how long it took to form a government

Tennis on telly | Hello, good evening, and remain indoors.
TR
trance 24 April 2020 11:38pm
The opening sequence leading up to 10 o'clock of that election was pitch perfect. I know there were complaints about the music, but that was its best iteration.

DP
DPE123 Central (West) Midlands Today 25 April 2020 12:30am
Now that was a studio. Dimbleby on good form and the whole coverage that year was excellent, right through the days up to Brown leaving Downing St and the handover of power. One of the BBC's best elections I think.

roo London London 25 April 2020 12:57am
that and andrew neil's party barge was the most important contribution to broadcasting this century 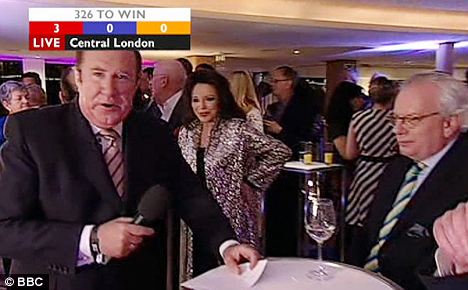 CM
cmthwtv West Country (East) Points West 25 April 2020 11:44am
All I remember from that night is being very ill, so I ended up not sleeping and watching it. One of the most interesting times in British politics, or at least we thought at the time...
FA
fanoftv Central (West) Midlands Today 26 April 2020 4:03pm
trance posted:
I know there were complaints about the music, but that was its best iteration.


I totally agree. Who would complain about that music? So majestic and powerful, and something different to the use of pips!

thegeek Founding member London London 27 April 2020 7:28am
trance posted:
The opening sequence leading up to 10 o'clock of that election was pitch perfect.

Avatar credit: SMPTE RP198
AS
Admiral Sven (previously Toohak113) West Country (East) Points West 27 April 2020 3:35pm
I'll try to keep as politically neutral as I can here but it wasn't bad. I wish they'd have used Arthur but I did hear something once that said Rick Wakeman didn't want to have to keep remixing it, which would answer a fair few of my questions.

The use of Gill Sans was quite good, and the presentation in general. No social media as well - a welcome Election Night bonus.

I must say that 2005 was probably the best (although not many people would agree with me on that). But Dimbleby was on-form that night - the best BBC election night coverage of the 2010's aside from 2019 for me.
Admiral Sven

There was also an audio mixing error early on, in which David Mitchell from the Channel 4 Alternative Election Night could be heard instead of an early DTL interviewee!


I'm 90% sure I got that tidbit from the podcast referenced here - I think that's where I heard a bit of a director's commentary of the opening sequence. Sadly it appears to have fallen off the web, and archive.org hasn't kept it. Perhaps long-term readers could have a look on their machines for 'robhopkin100510.mp3' in case they downloaded it at the time...
Avatar credit: SMPTE RP198
RE
Revolution London London 29 April 2020 4:45am
The XX's 'Intro' gained popularity off the back of the BBC's election trailer.