Is that confirmed? Wolf has secured an interview with the White House Chief of Staff Meadows. It really wouldn’t surprise me if they dropped an hour.
NZ
nznewser World News 5 August 2020 9:35pm
BFGArmy posted:
ginnyfan posted:
Well at least this year CNN has been in rolling news mode most of the time, which at this point is not something to be thankful for.

What I can't stand is the dominance of CNN US and it's mediocre talent. CNN London still closed? Why? People all over the world are working in offices like they used to and somehow surviving.

Wear a mask and get on with it. CNN is paying all of these people to sit home and pretend they are working. I know some do stuff but in reality it's not much and it's a big question for how long it can continue. Maybe Zucker has a plan to use this as a chance to get rid of most of CNNI employees. Would not surprise me at all....


I can understand to an extent CNN wanting to protect staff, not reopen studios.
However, even then though many of the CNNI staff could still do their usual slots - Becky is now back in her Abu Dhabi studio and Quest, Amanpour, Hala and Isa all have WFH set-ups so even if they maybe can’t do in studio surely they could do their usual shows as normal just at home.


Is that confirmed? Wolf has secured an interview with the White House Chief of Staff Meadows. It really wouldn’t surprise me if they dropped an hour.

The current coverage is replacing The Lead. Not clear what happens next hour when The Situation Room starts on CNN/US
www.airhumberside.cjb.net
TM
TMD_24 Anglia (East) Look East 5 August 2020 9:46pm
Trump has a COVID news conference at 10:30pm UK time so I wouldn't be surprised if they switched to CNN USA at 10pm.
Does Graham Norton have Norton Security installed on his computer?


They certainly did. 7 hours of domestic coming right up!
OM
Omnipresent London London 8 August 2020 10:14pm
Happening now. The Situation Room celebrates its birthday. We want to welcome our viewers in the United States and around the world. I'm Wolf Blitzer and you're in The Situation Room for the 15th year running. You will never leave.

Congratulations to the one-and-only @wolfblitzer as he and his team celebrate the 15th anniversary of his show, @CNNSitRoom! All of us at @CNN, as well as his viewers in the US & around the world, thank him for his steadfast commitment to bringing us the major stories of the day. pic.twitter.com/bQkhc7egZk

HE
headliner101 West Country (West) Points West 13 August 2020 2:22am
And Anderson has been substituting for Wolf in TSR's 1st hour.
TM
TMD_24 Anglia (East) Look East 13 August 2020 9:53pm
In case anyone is wondering what CNN is doing coverage wise with the Democratic convention, CNN is showing 6 hours of coverage each night from 1am-7am UK time for the Democratic convention with Wolf Blitzer, Jake Tapper, Anderson Cooper and Dana Bash the presenters. I also see from the US schedule that The Lead is going to be 2 hours from 8pm UK time although I'm not sure if the first hour will not be shown on CNNi with Quest Means Business instead. The schedule on my Sky box hasn't updated yet.
Last edited by TMD_24 on 17 August 2020 10:00pm
Does Graham Norton have Norton Security installed on his computer?
TZ
TimZ World News 19 August 2020 12:39pm
Looks like New Day is back in their pre-Covid studio instead of the DTL positions, even though John & Alison are still physically distancing.
Also, the international weather bar is back today on CNN International. No international news ticker though. 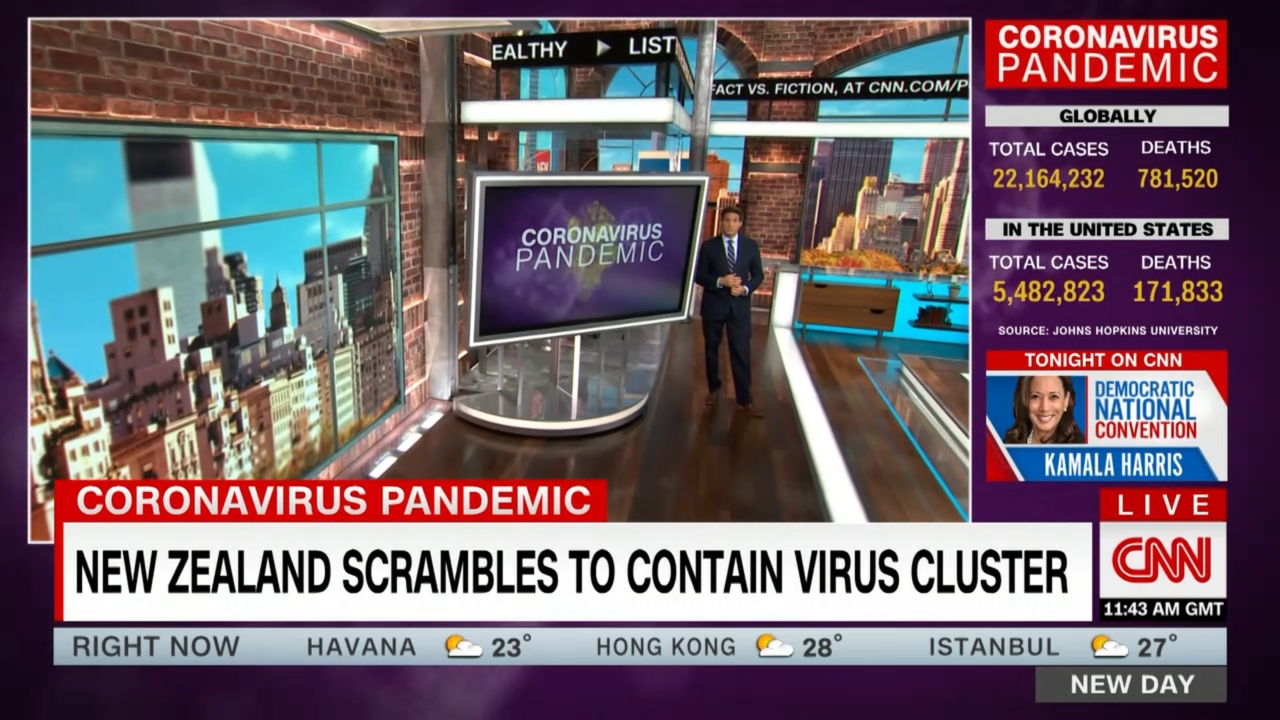 Newsroom Banned from this forum 19 August 2020 12:52pm
Already mentioned in the coronavirus thread. No other studios are back in use yet at Hudson Yards.
TR
TheTravelcard 19 August 2020 7:12pm
Just seeing Anderson Cooper anchor the 1pm hour of CNN Newsroom and it has got me thinking...

1. Brooke Baldwin's hours have been called CNN Newsroom forever but for the past 5/6 years, she does not refer to her show as CNN Newsroom on air - there have been different graphics and even different music. This also happened for Don Lemon just before he moved from weekends to weekday primetime. Why?

2. Since the pandemic started and the US daytimes CNN Newsroom editions don't have fixed anchors per se, when it is a primetime anchor the relevant stories' graphics and music are used instead of that of the generic editions and they don't start with "you're in the CNN Newsroom". When the usual anchors bar Brooke Baldwin are there or a correspondent/fill-in anchor, it's business as usual. Is it because CNN Newsroom hours are somewhat perceived by CNN to be 'beneath' the primetime anchors, as there is generally not significant editorialising?

In most of these cases, even more jarring is that "Newsroom" still appears in the bottom-right of the screen.