Some bits and bobs that haven't been shown before

This site closed in March 2021 and is now a read-only archive
Previous Next
SE
seamus 10 December 2020 8:01pm
Amazing work as always, can’t wait to see more!

DT
DTV 28 January 2021 12:05am
Not really working on anything in particular at the minute, but just thought I'd share some of the things I've been tinkering with since finishing up N8. 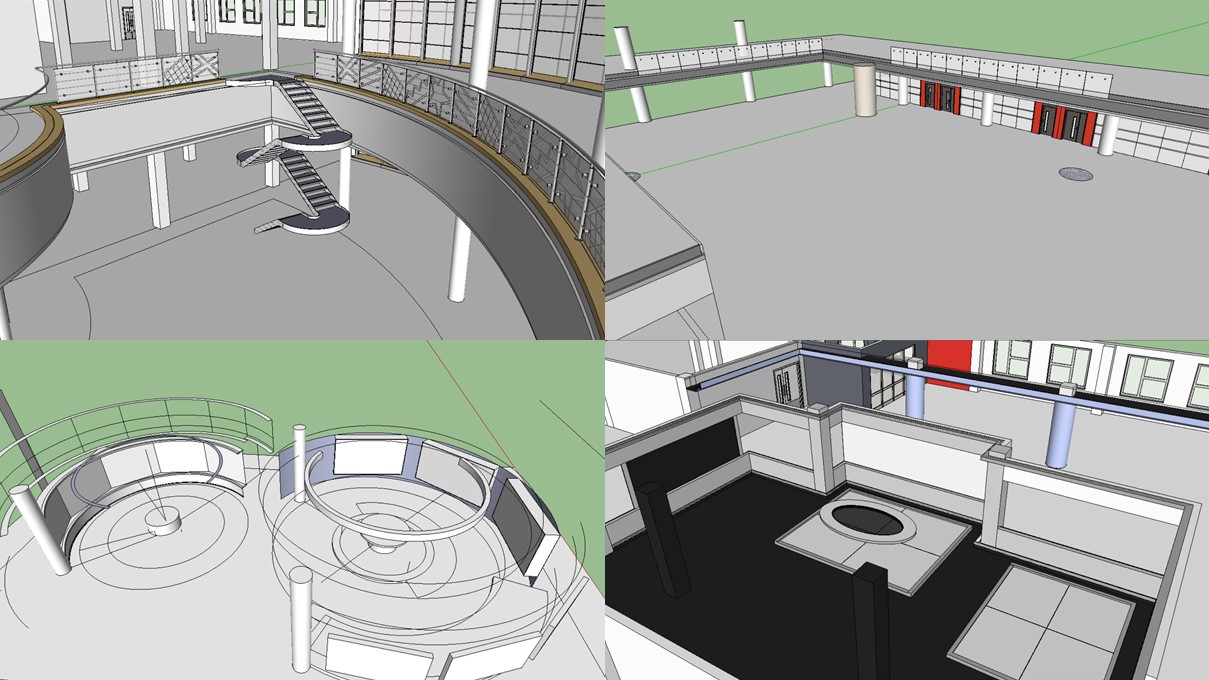 - The two newsrooms are really there to be used as studio spaces for N8 or NBH-E rather than for their own good, but I have considered turning the NBH newsroom into an Election Centre with a desk in the middle of the pit.
- The NBH-B sketch is an attempt to finally build perfect versions of the NBH sets before they are replaced (even though that doesn't look like it'll happen anytime soon). My first (very poor) attempt at NBH-B was in late-2012 and it is a studio that I've gone back to every time my SketchUp skills have improved - by my reckoning this would be my fifth attempt.
- The final shot is a BARCO-style N8 with a physical Lightwell-style newsroom - just to see what that era would have looked like with an actual newsroom backdrop.

Unfortunately, it is a lot easier (especially time-wise) to have an idea than it is to realise it. These are only some of the ones that I've even started on. Some of the others that have flicked through my mind:

- A hybrid between the 2013-era BBC News style and the 1999-era layout, inspired by the original NBH plans that had the newsroom balcony studios complete with 1999-era N8 style sets.
- A recreation of (or possibly idealised homage to) the 1988-1993 BBC Newsroom set.
- A non-/semi-VR version of the current ITV News set.
- A BBC Breakfast set from what is currently the BBC Sport news studio.
- BARCO-era TC7 done properly - i.e. more than just some desks and chairs plonked on the rostrums.

With regard to the recent image:
1) Love the inclusion of the original flag era panels on the glass balustrade, not many would pick up on that detail, brilliant.
2) Not much to say about the NBH-E background. So I'll await whatever you do.
3) Good to see what a wireframe NBH-B looks like and gives some proper perspective of the set.
and
4) Love the idea of the Lightwell style being applied to N8, would be worth tinkering around with. Brilliant concept, also since BBC World News already had a half cooked version of it anyway until the move to NBH, it would be worth investigating.

As I said, can't wait to see what you do next.
DT
DTV 30 January 2021 6:29pm
Just experimenting with my Breakfast idea today. 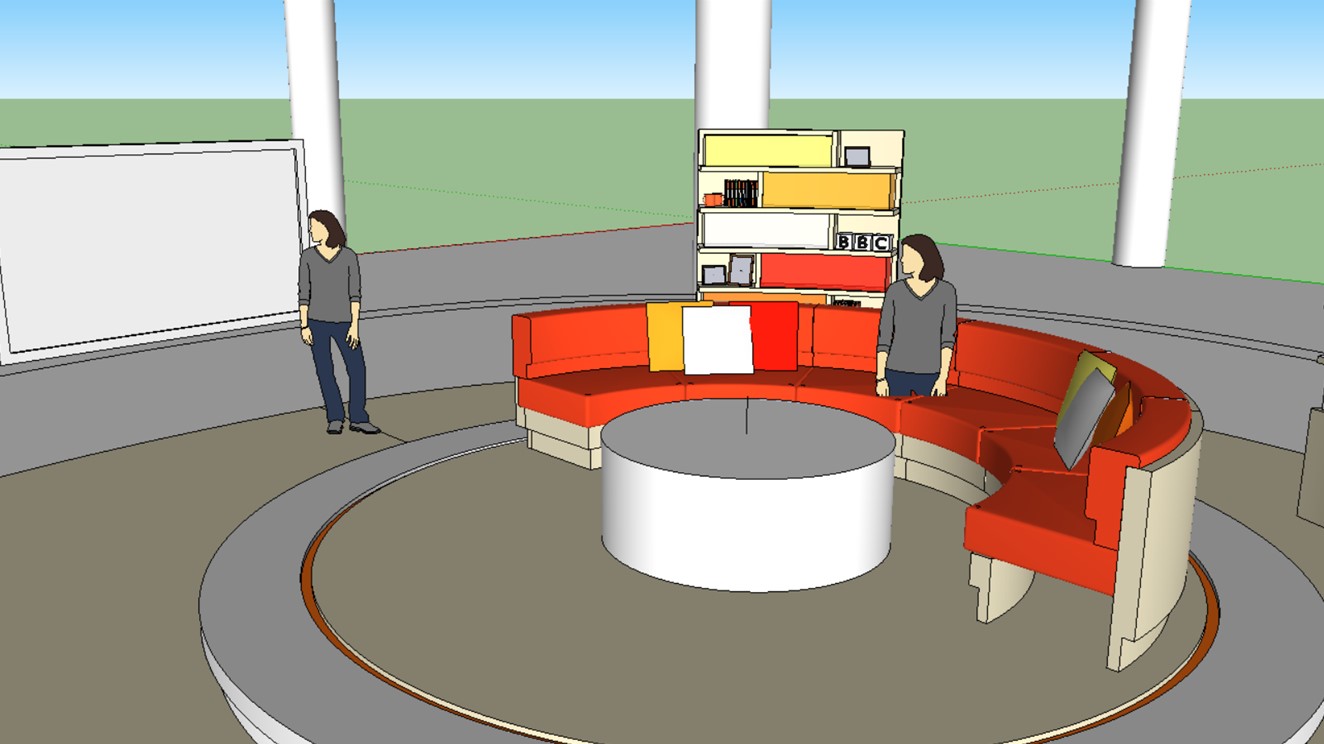 The set would be where the current BBC Sport news studio is - they can get relegated to their second set - but the main axis of the set would be rotated 90* clockwise. This set would only be for Breakfast, not North West programmes as well. 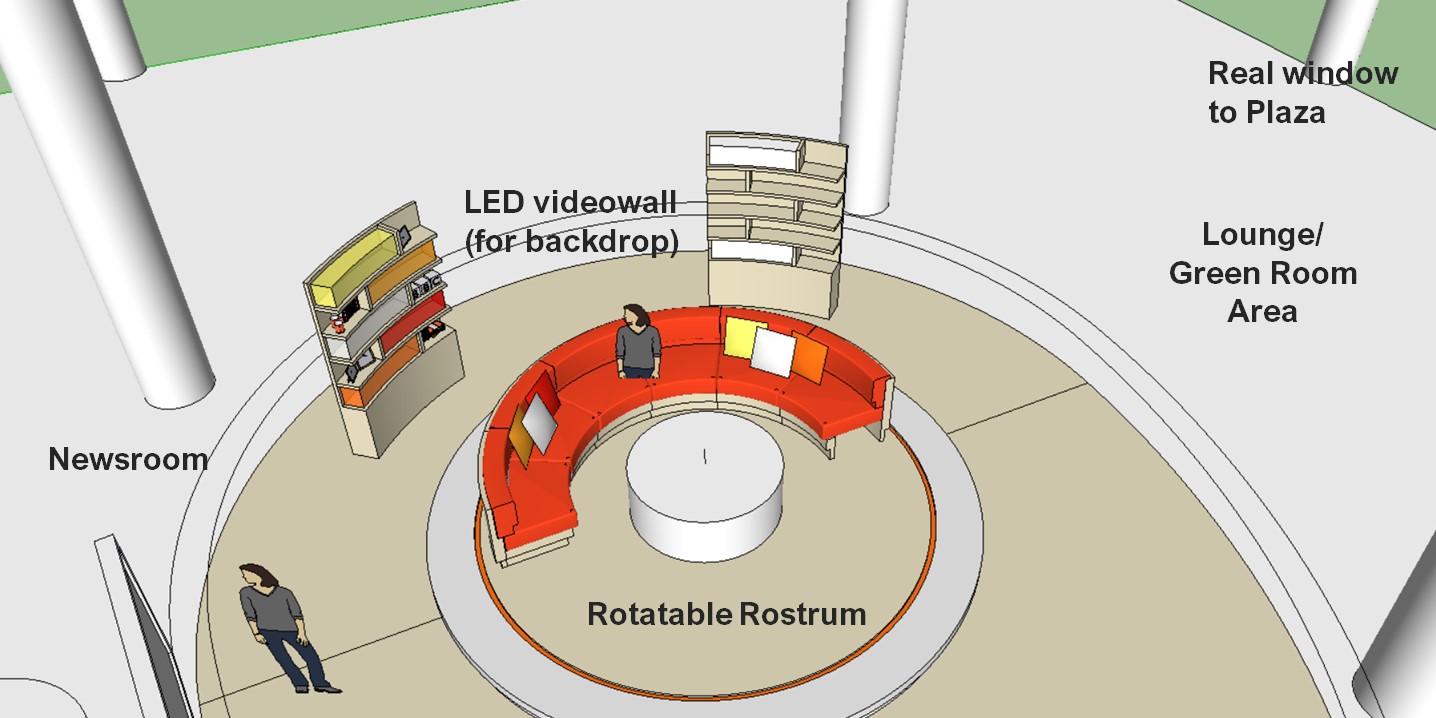 I'm trying to make the main area feel more homely and like a living room - a bit of wood, no chrome, cushions. The bookshelves would have books, 'family' photos of the Breakfast team (possibly old ones as well), fake flowers etc. I've opted for a blood orange sofa as a compromise between the traditional red and the fact that the programme's colour is clearly orange.

Off to one side would be the newsroom area (redecorated in more Breakfast/News colours) and on the other would be a lounge area similar to what used to be on the backdrop screens - both areas would be separated by glass. The lounge area would also be in front of the windows to the plaza and so would allow a little bit of natural light on to the set. The rostrum would be rotatable to allow for a degree of flexibility - on hard news dominated days they may opt to have a newsroom backdrop etc.
DK
DanielK 30 January 2021 6:53pm
I like that idea!

One thing I'd like to see is a height adjustable coffe table, that can rise to desk height and have a wider top put on it. I think it would help with the flexibility of the set.
DT
DTV 30 January 2021 8:22pm
DanielK posted:
I like that idea!

One thing I'd like to see is a height adjustable coffe table, that can rise to desk height and have a wider top put on it. I think it would help with the flexibility of the set.


Good shout. I suppose with the newsroom backdrop you could have a second BBC News 'north' studio - similar to some US broadcasters - that in the event of a major story from Manchester etc. the main bulletins could decamp.
AL
AaronLancs 30 January 2021 8:51pm
Decent work with the BBC Breakfast set but could you include BBC North West Today in with that as I keep on saying over in The Newsroom, we (BBC NWT) did move there from a studio the size of TC7 to what we have now at least a year before BBC Breakfast moved up to flat share with us.

DT
DTV 9 February 2021 9:54pm
Had a few hours spare today and wanted to do something non-BBC for a change - so had a go at my ITV News semi-physical set idea.

Just 4/5 hours work and not fully finished, but just wanted to get the general gist of what it could look like.

DT
DTV 20 February 2021 10:03pm
Not a mock or a recreation but an outline idea for a set of BBC One idents that popped into my head yesterday evening. Obviously it's well outside the realms of what could be achieved on this forum, but I'd thought I'd share it - I mean, it can hardly be worse than Oneness.

The focus of the idents would be a Paddington-style CGI robin. Each ident would open with a wide-shot or two of it fluttering over the country, before the bird would descend. You'd then cut to a shot of it perched on something - with the height of the robin being about 1/3 of the screen. This would be the resolution of the ident and the bird would continue to twitch, move about and bob up-and-down while the CA speaks.

Where it is flying over and where it perchs is obviously open to plenty of variations - on a fence in the countryside with meadow blowing gently in the wind behind, on a town centre bench with people walking by, on a crossbar with a game of football going on, on a TV aerial on a row of houses, in a bird bath, etc. You could even have a news one where it perchs on the plaza outside NBH and it would definitely work for Christmas idents as well.

It would give BBC One a symbol that it's been lacking for years - with a robin being particularly apt as it is the unofficial national bird and the red-breast can be emphasised as the colour of BBC One. The opening shots would be a little bit reminiscent of the balloon idents and the resolution would have a similarly 'everyday' feel as oneness - but with a sweet, little robin bobbing about rather than some people gormlessly standing around. If you were pitching it to the BBC you could also add a bit of w*nky PR speak - 'the bird represents BBC One - flying through the air to all parts of the country like TV transmissions' etc.

I don't know, what do you lot think?