Previous Next
TW
tweedledum Border (England) Look North (North East) 12 December 2013 4:49pm
Those gradients look awful. Have one colour, and have a slightly darker/lighter colour of that and them try that, it will look alot better! & you need to use a thicker Gill Sans font - as used by the channel itself

SF
Shane Forster (previously s.forster) London London 25 December 2013 7:23pm
They're not bad, but you could think about creating a new logo for the BBC. I love the current BBC logo, but this isn't something that refreshes the channels; in fact, they remind me of the 1997-2001 BBC era. Is it just me? Overall, good effort. I have given you three stars, because you have only created a basic "rebrand", which is just about satisfactory.

Critique, I'm not starting an argument, but you are being really harsh to many people. Yes, I know that you are only providing them with criticism, but there is no need to be so harsh/mean to all of these people. Sure, I don't think I could give anyone 5 stars, and even 4 stars would be a push, but I'm not as harsh. They're not professional editors, they are amateurs; and their efforts are excellent. Well done editors; with practice, you will become very successful. Your efforts are commendable. I have been making some mock breakdown slides for around a year now, and they're very respectable. If you want to become a judge, I'll become one too.

Merry Christmas to everyone!

Critique, I'm not starting an argument, but you are being really harsh to many people. Yes, I know that you are only providing them with criticism, but there is no need to be so harsh/mean to all of these people.


Hello there - sorry to rear my head but I just thought I'd pop in and ask why you've decided to single me out as being some sort of rude, cruel person, in this thread in particular? I'm not as active in The Gallery as I used to be, and in this thread I've posted one comment on the first page, which read:

Critique posted:
As Jonny once said 'this is the level of astuteness we're up against'. Beyond 'this font suits the channel' 'this font looks better': why does it suit it better? Why is this better? And why have you created a gradiented mess which I assume is supposed to be a copy of MDTA's work (although it's insulting to him to even call it a copy)?*


*I notice it says I've edited that first post, and whilst I assume it was for spelling, I can't remember exactly what it was for, but I can't imagine I was editing out anything that was ridiculously abusive or anything. If I did, then you can disregard the rest of this because, well, fair enough.

Now, whilst I admit the above post isn't the most in-depth, measured response to the mock, I am not being 'so harsh/mean'. Albeit bluntly, I air my grievances with the original mock, and the faux explanation given in regards to choices. In the original it is clear the OP is trying to mimic MDTA by giving reasoned explanations for everything, and being very methodical - this in itself is good. However, the fact of the matter is that there are no reasoned explanations in the first post to this thread: 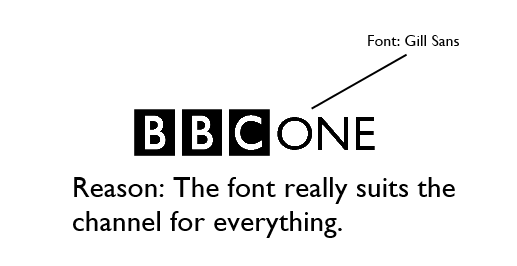 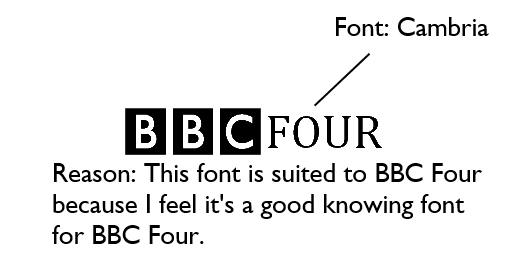 As I mention in my first post, 'Why does it [the font] suit it better?', 'Why is this better?' - 'I feel it's a good knowing font' is a very vague response, and means nothing. What do you define 'knowing' as? Meanwhile, in regards to 'the font really suits the channel for everything' - why does it? Why do you believe Gill Sans to be the best, all-purpose font for BBC One to use? My point here is the OP has made a weak attempt to be justified and whatnot, to the extent of doing what MDTA did and putting each logo in an image with a little explanation (in his case about sizing and proportion), but all this in reality explains nothing.

Beyond this, I am aware that the terms 'gradiented mess' and words to the effect of it being an insult to call this a copycat of one of MDTA's mocks are not the nicest ways of stating my point, as I certainly haven't minced words, but after a few years now of new mockers ignoring kind, sensible advice from members, it's clear that you have to blunt for your words to actually be heard, as they're otherwise ignored. In all, I wouldn't regard this as a particularly offensive post, as my only contribution to the thread - others have been far more vocal about this mock, and it therefore makes me wonder why you decided to single me out?

Show hidden content…
I've noticed this once short post is now growing quite rapidly, so here's a nice photo to break things up:


Also, as I mentioned earlier, I haven't been particularly vocal in The Gallery recently, so I am quite unsure how I have managed to be rude to so many people. In fact, looking through the Gallery, I cannot see anything in recent times where I have made a particularly blunt exclamation of dislike for a mock - the only moments that stand out to me where I will have been blunt and harsh would have been in the glory days of tvmocker14's Daybreak mock, but that was years ago.

And that, basically, is all I have to say. Your post didn't particularly upset me or anything, but I think personally making a point to me struck a nerve, hence the essay above.

Michael Power World News 27 December 2013 11:50am
Thankyou for the kind words, Shane! Critque, thank you for going in depth more with your post. And I gotta agree, people have been more vocal and mean like MatthewFirth with saying it's crap, sucks and saying it without any reason. Anyway, now for some updates!
For the logos I am thinking of going for "Numerals With Style." It won't be like the BBC1 and BBC2 logos from '91-'97 it will be different. Also, I would like to say that during my holiday, I thought of some Ident ideas for BBC1, I thought "Dramatic and Fun Mixed", and BBC4 "People who changed the world" BBC4s one will embark on a different so lets say BBC4 is having a technology documentary up soon so they playout a Steve Jobs or Bill Gates ident. Not sure on the full ident ideas yet!

MF
MatthewFirth Meridian (South) South Today 27 December 2013 1:36pm
I will no longer be involved with this topic, but will not be apologizing either.

Michael Power World News 30 December 2013 1:02pm
Here is the beta of the "Numerals with Style" logos This is just a quick draft and they will get better when I improve!

Yeah... I kept Gill Sans for the 2 because it was the simplest choice. Even though it is 22 years old, it is still a good ident/logo symbol.
TW
tweedledum Border (England) Look North (North East) 30 December 2013 1:07pm
That is not the right "2" BBC Two uses, I think they use a heavy variant. They are awful, and arnt consistent

VMPhil Granada North West Today 30 December 2013 1:21pm
tweedledum posted:
That is not the right "2" BBC Two uses, I think they use a heavy variant. They are awful, and arnt consistent

It's a mix between the top half of the Ultra Bold variant and the bottom half of the normal variant.

Use the correct BBC logo as well.
JO
Jonny Tyne Tees Look North (North East) 30 December 2013 1:23pm
mikey88772 posted:
This is just a quick draft and they will get better when I improve!

Would you serve raw chicken to a friend while reassuring them their next meal will be cooked properly?
youtube

Use the correct BBC logo as well.

Well which ones could work?