BBC News in the style of The Nine

This site closed in March 2021 and is now a read-only archive
Previous Next
LL
London Lite Founding member 17 August 2019 2:17pm
The Nine style was what I was expecting from the relaunch instead of a annoying white bar flipper on the NC. Bar what has already been mentioned about the use of the BBC One logo on Breakfast and 'The One', the execution is outstanding.
MO
Moz 17 August 2019 9:22pm
Just gets better and better.

Simply put, BBC News should be like this.
BA
Ballyboy 18 August 2019 2:41pm
outstanding. was glad to see Newsline in Reith albeit a mock lol
BR
Brekkie 18 August 2019 5:11pm
London Lite posted:
The Nine style was what I was expecting from the relaunch instead of a annoying white bar flipper on the NC. Bar what has already been mentioned about the use of the BBC One logo on Breakfast and 'The One', the execution is outstanding.

I do think the News Channel and possibly the regions kind of scuppered the chances of the Nine style being rolled out.

Although the text with no background works really well for astons for names and locations I don't think it works that well for continuous story information, and nowadays as there seems to be an aversion to having a screen with no on-screen junk present for a news channel that is a problem. So step one there is introduce the translucent background.

The next element of course is the box - works superbly for just the BBC News logo and selected other branding too - but when it comes to longer programme names a choice had to be made about having them small scale within the box or just using the BBC News logo throughout - or failing all that amending the design so the box could grow to be big enough for the branding. And that is where we are.
HA
harshy Founding member 18 August 2019 9:51pm
Yes this is how it should be done well done on a fantastic effort with the mocks

This doesn't really concern the graphics side of things, however I've been working a bit on the regional news side, and was thinking about the studios of those who still have the older style TVC sets. So I wanted to try and create a consistent style set in line with NBH, mine is based in Hull's studio, I don't have exact dimensions for the studio space, so I've gone by eye through a few behind the scenes videos, I feel it would just fit, originally I made the desk a bit too small, so I enlarged it (it would have been way too big considering I was able to also fit a sofa in as well), I'd say the scale is close, as I think the Hull studio is larger than you think, and if you think my design is a bit big, then it would most likely be easily fixed through enlarging the desk again...

The main inspiration comes from Spotlight's set in Plymouth as I liked the idea of having a printed backdrop, so I opted for the view of Queen's Gardens as roughly seen from the newsroom, and as with Plymouth, the backdrop would be able to be altered with light to switch it to nighttime (I'll apologise for the quality of the backdrop since I couldn't find a great quality picture from the angle I wanted). The other side of the set has three screens making up a 'catwalk' with a Studio B style backing filling the space (the graphics on the three screens are inspired by North West Tonight's backdrop, and would subtly animate in the same way). The two areas are separated by a bigger screen, similar to the size of the current one. 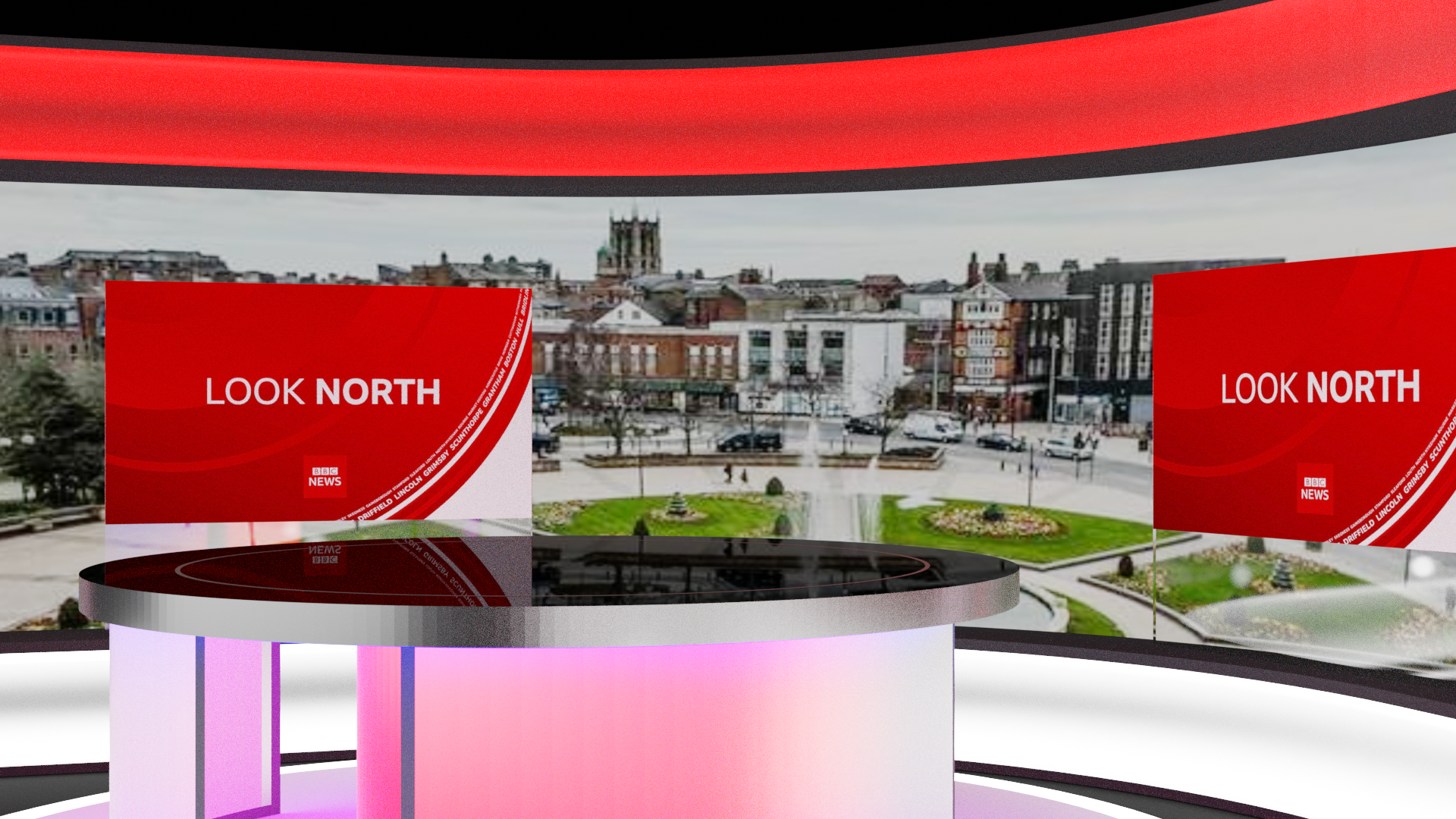 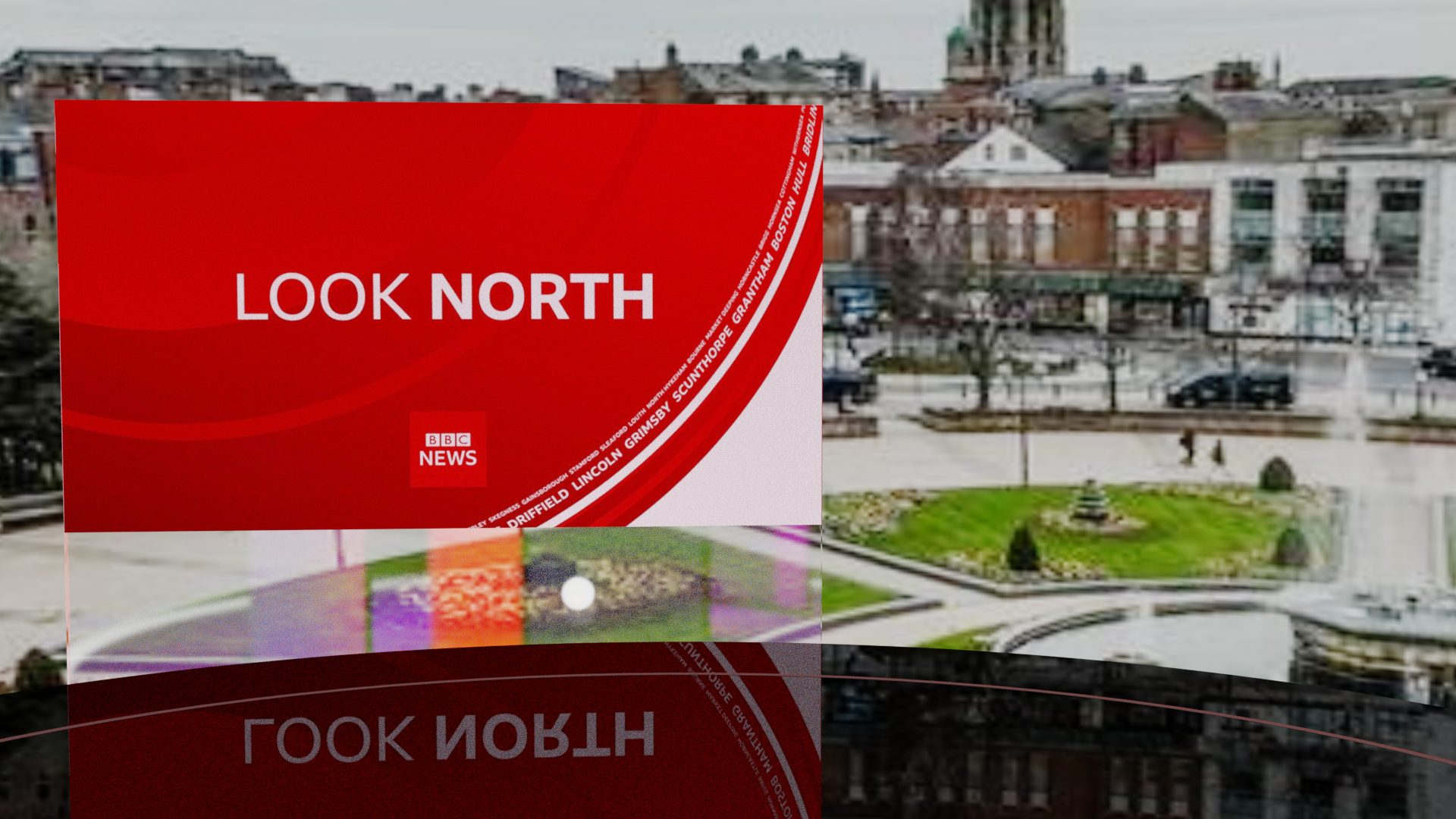 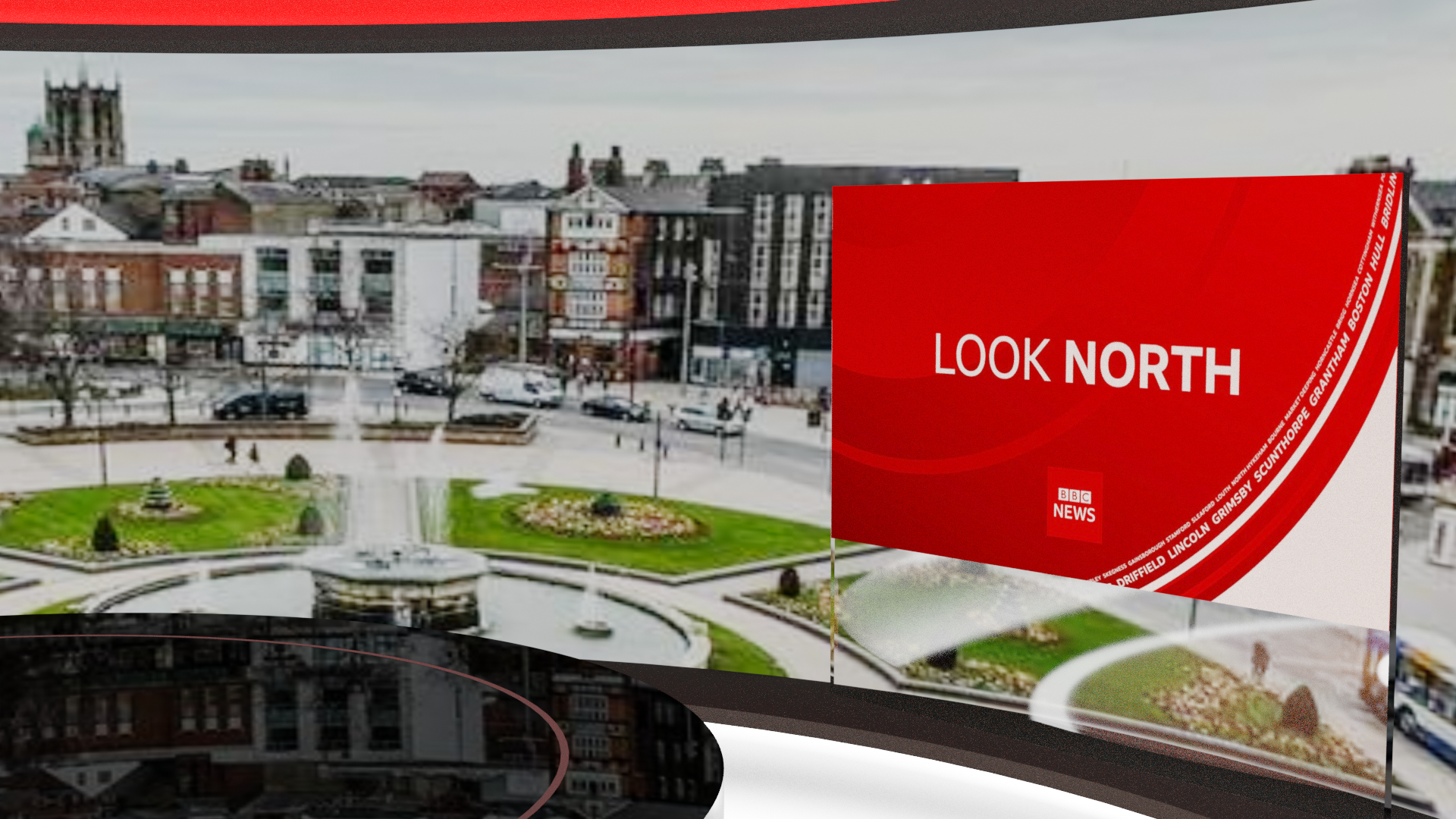 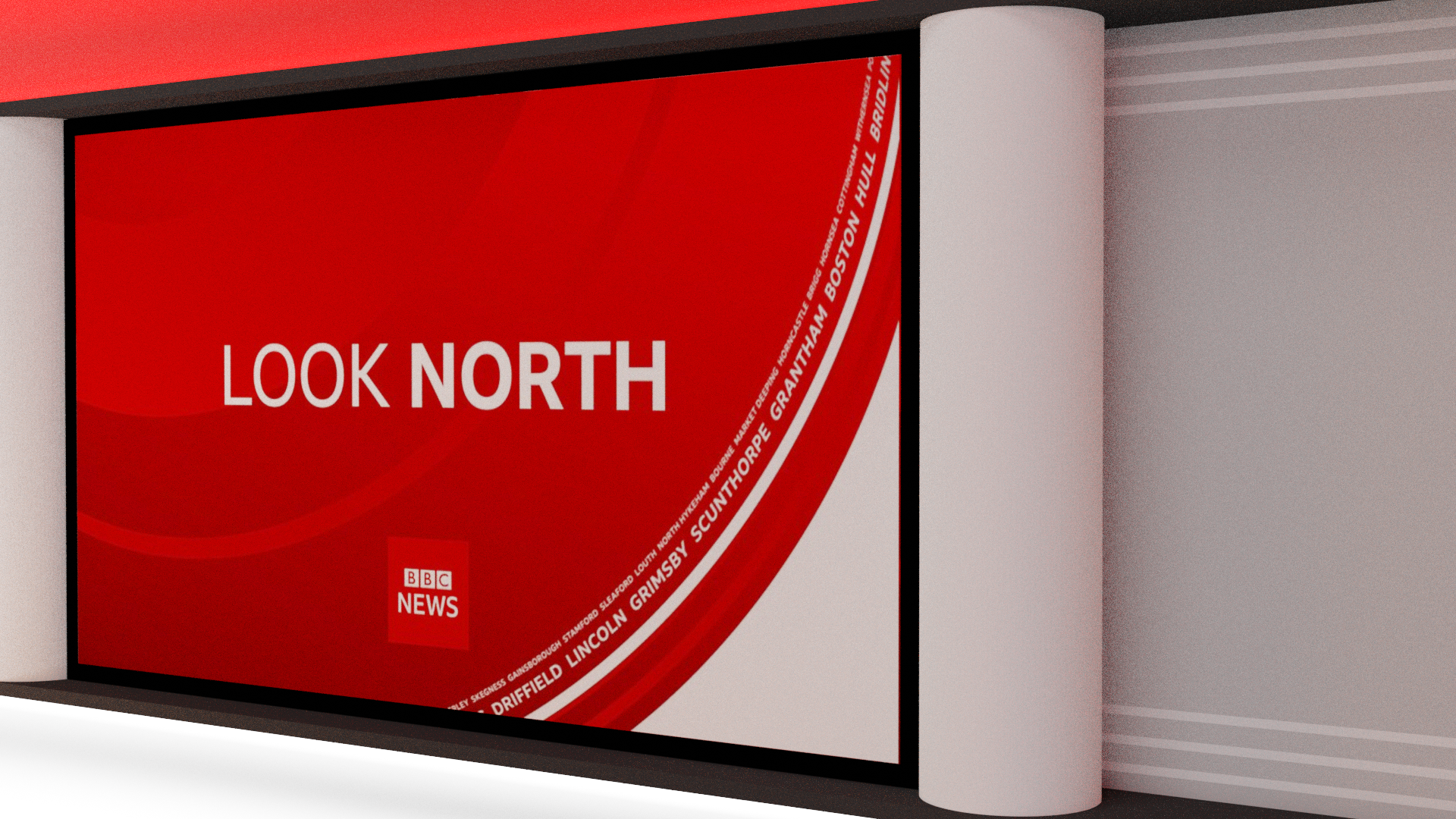 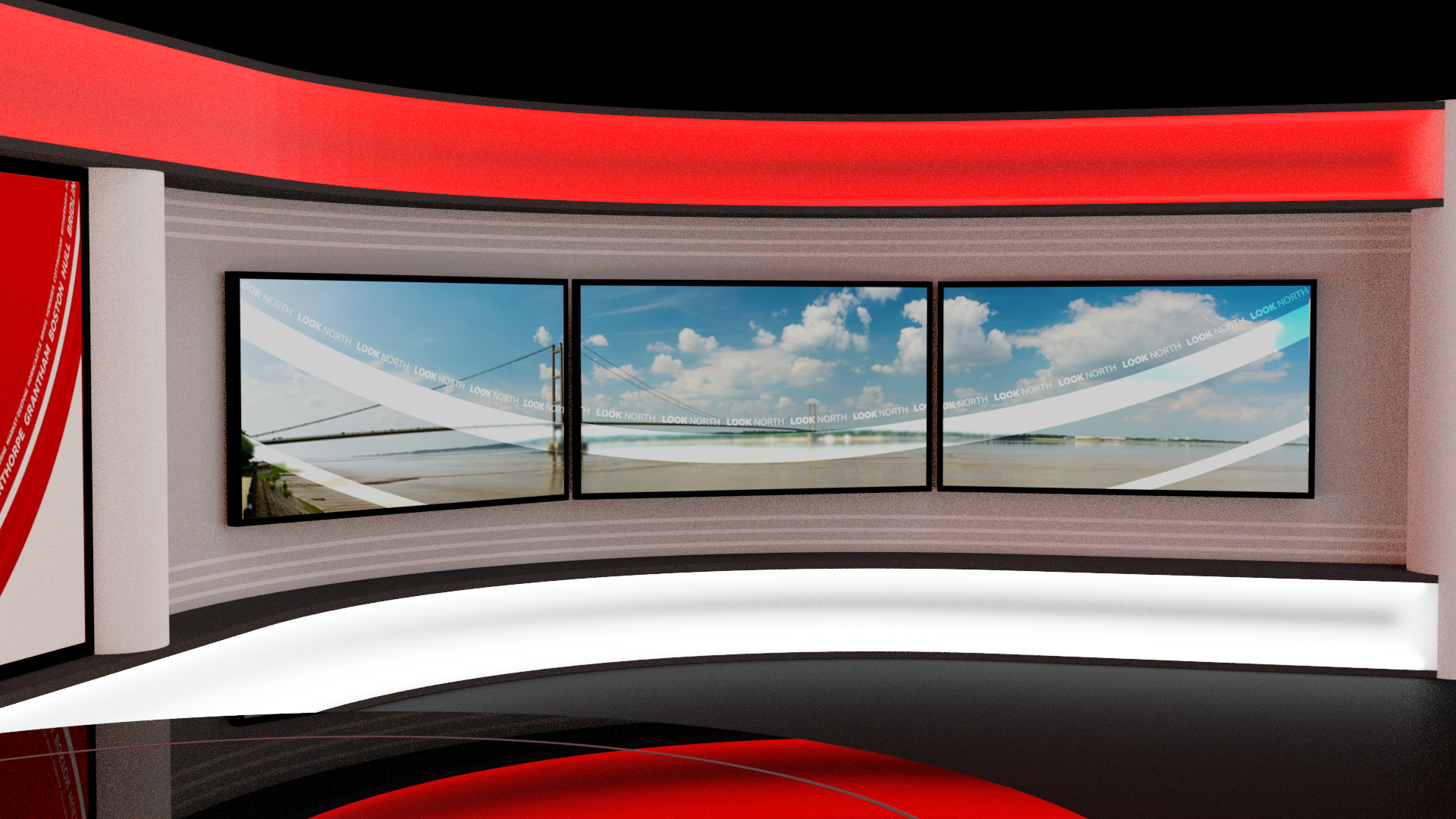 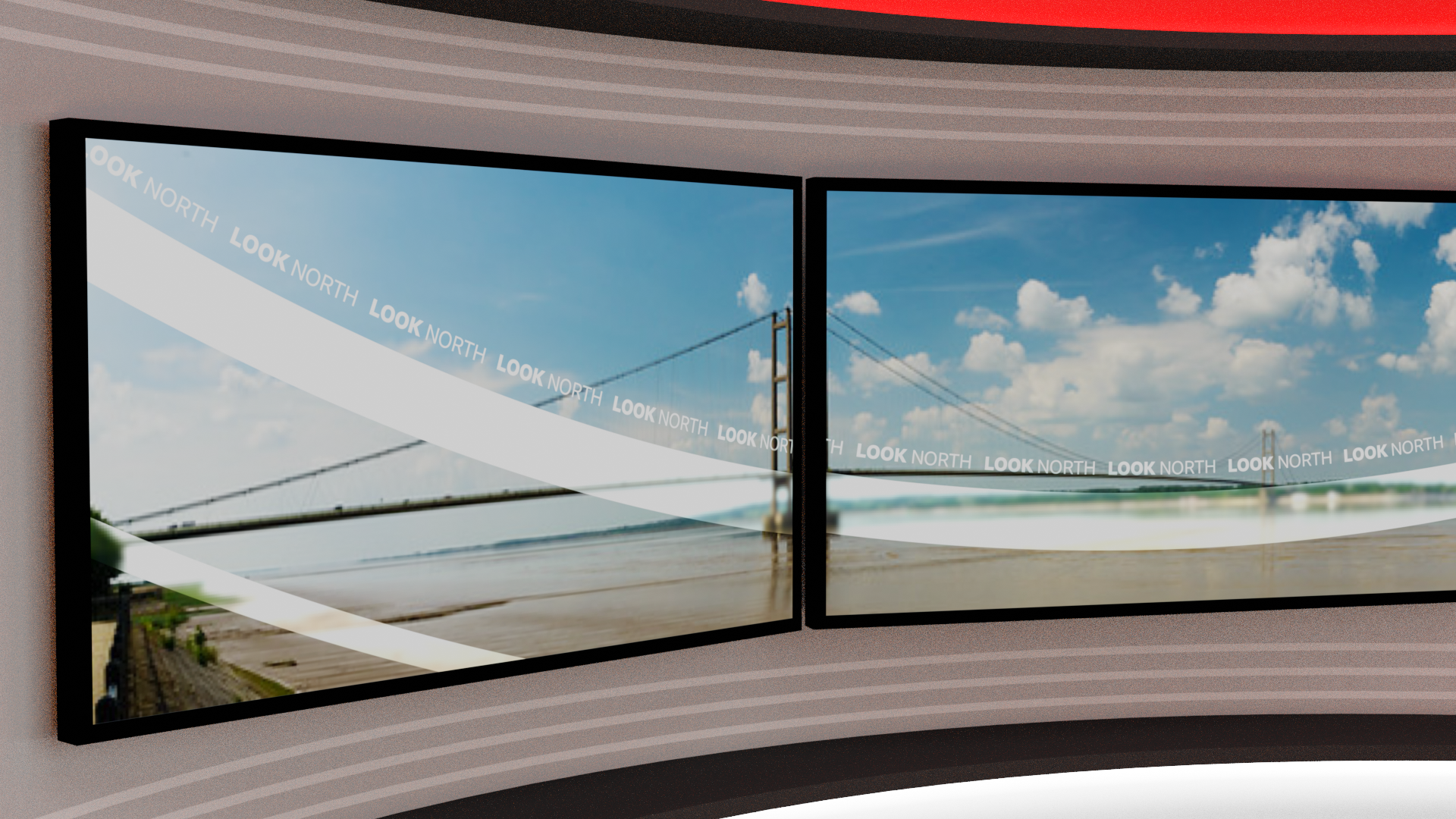 and one showing the overall size... 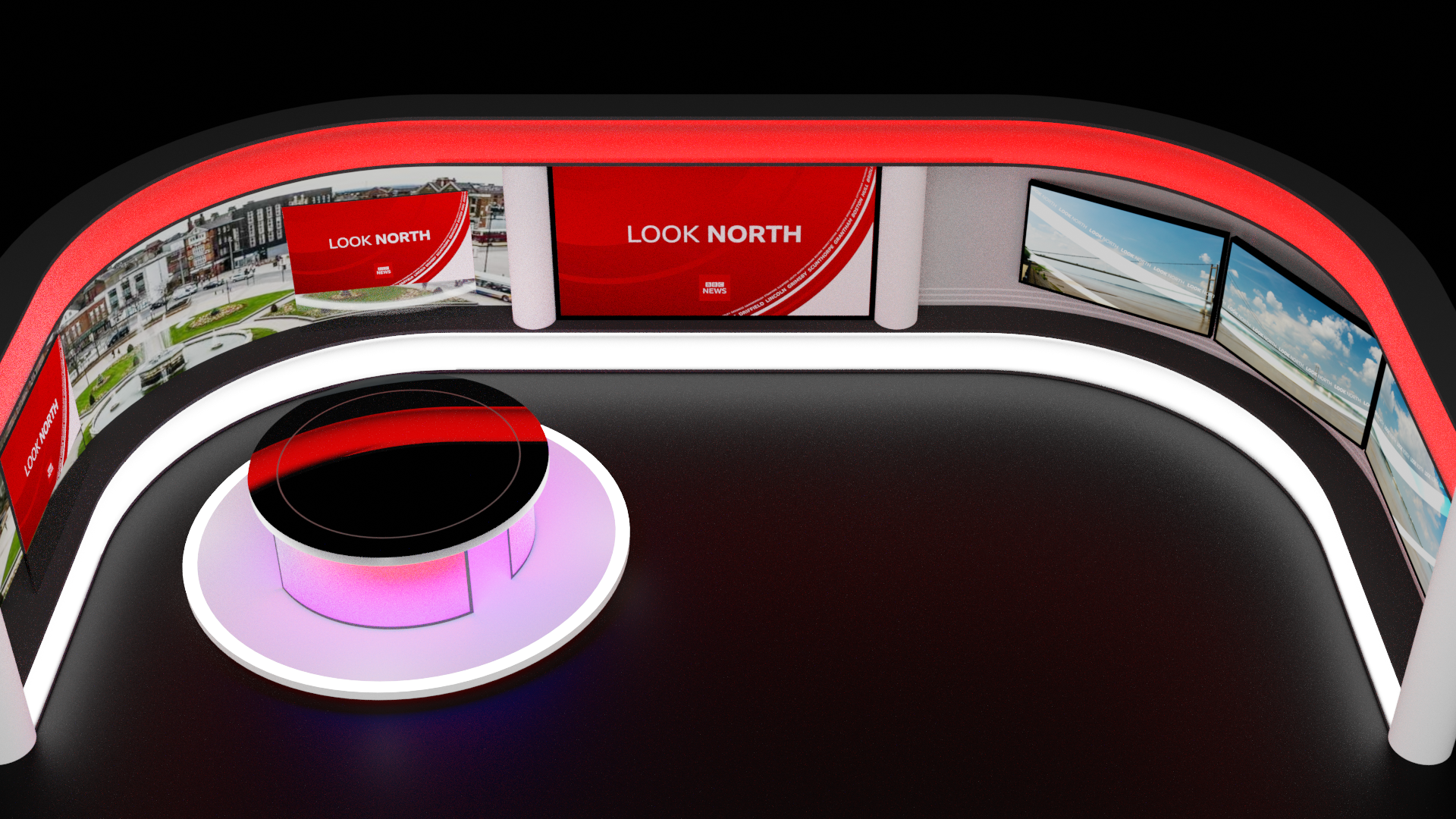 And the same angles, but altered with BBC Sport branding for sport sections and scores... 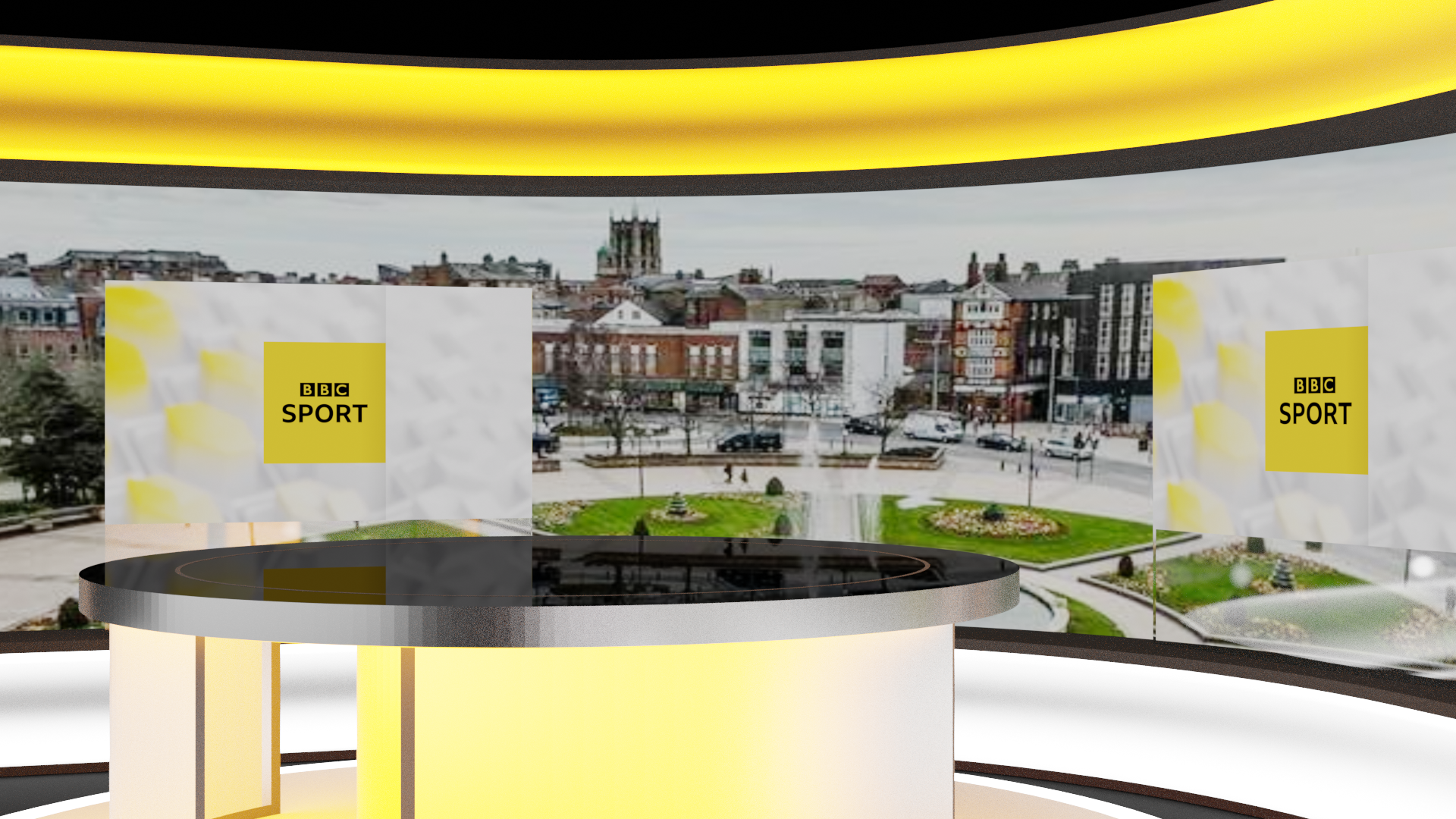 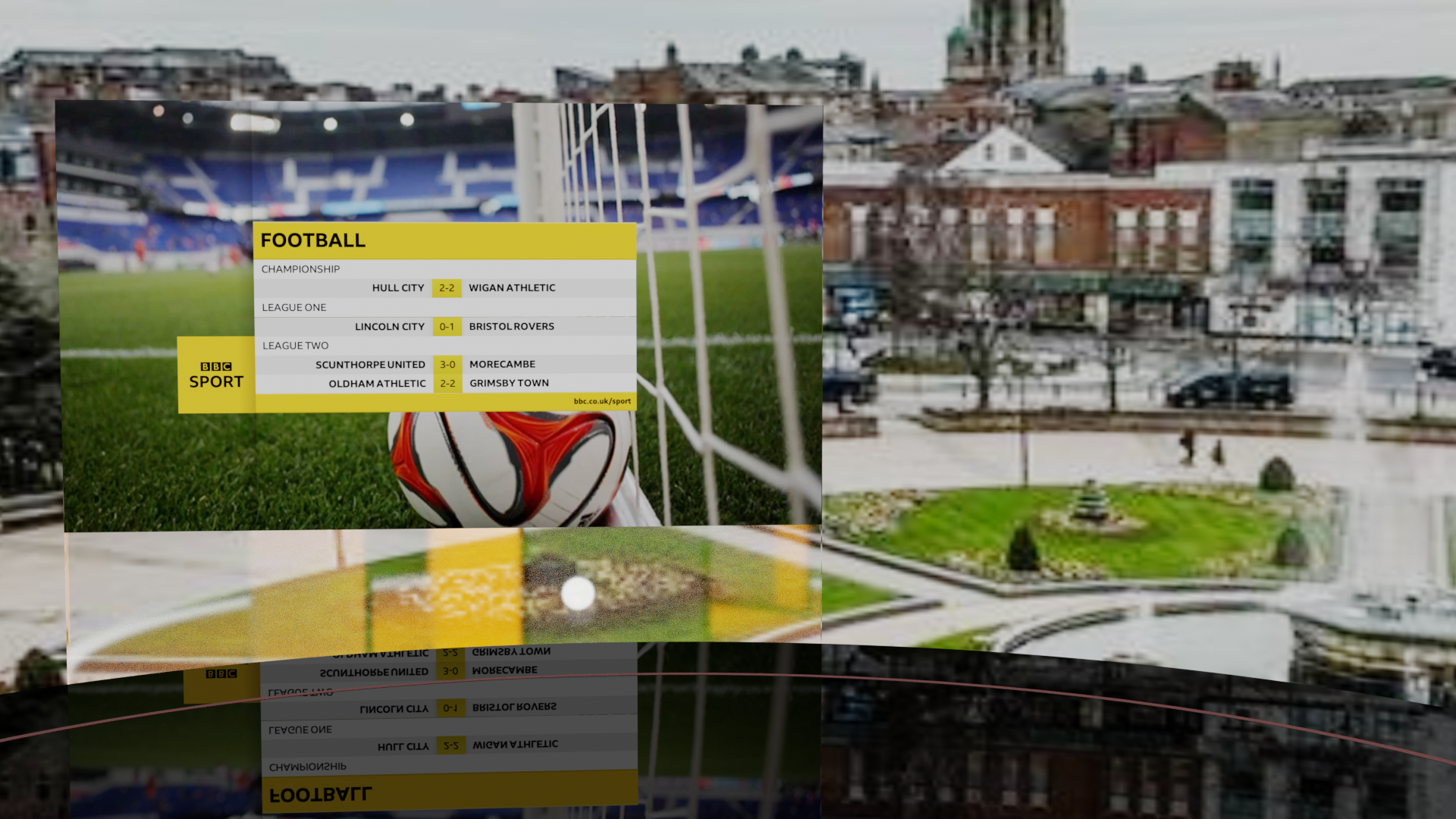 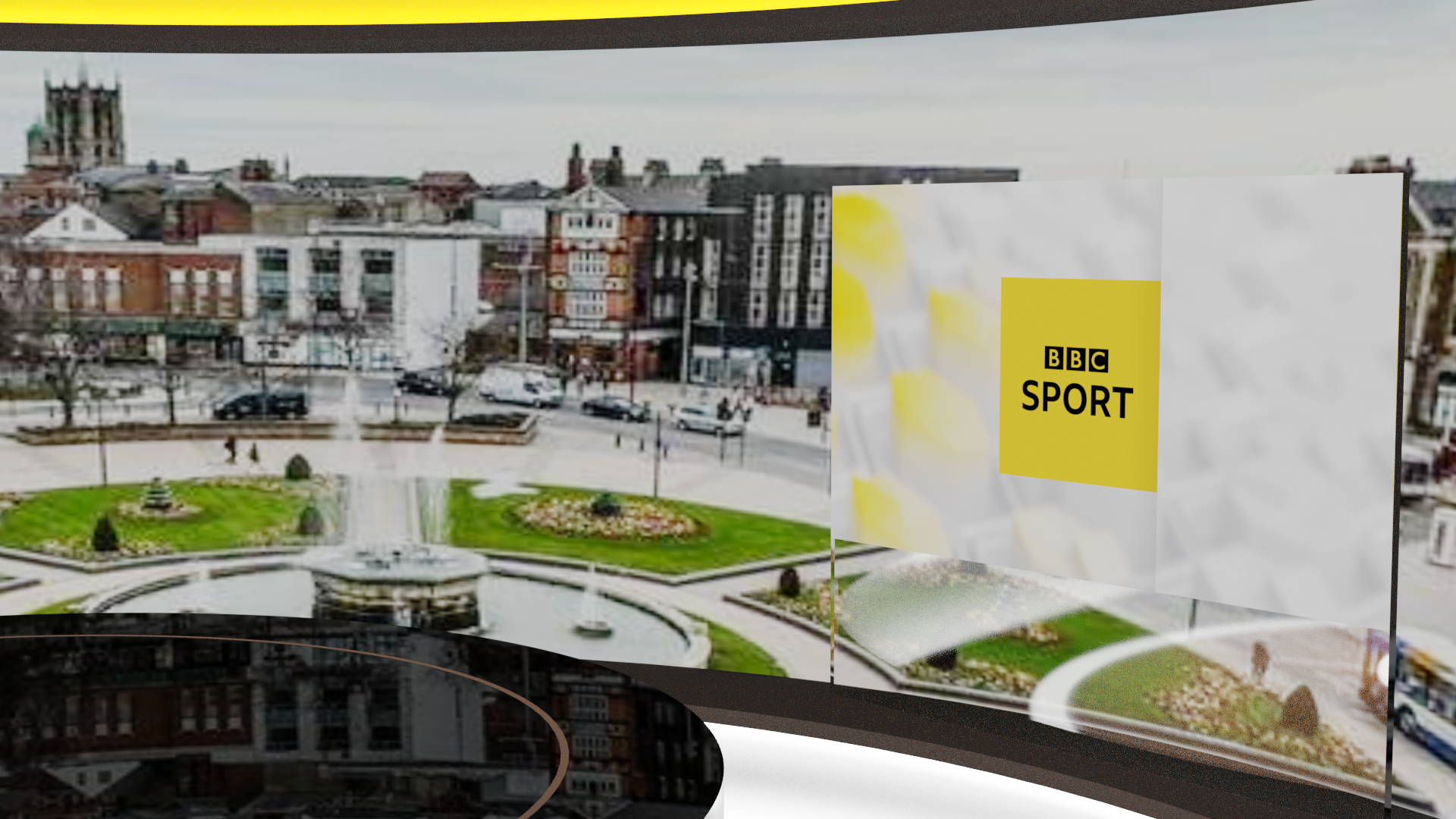 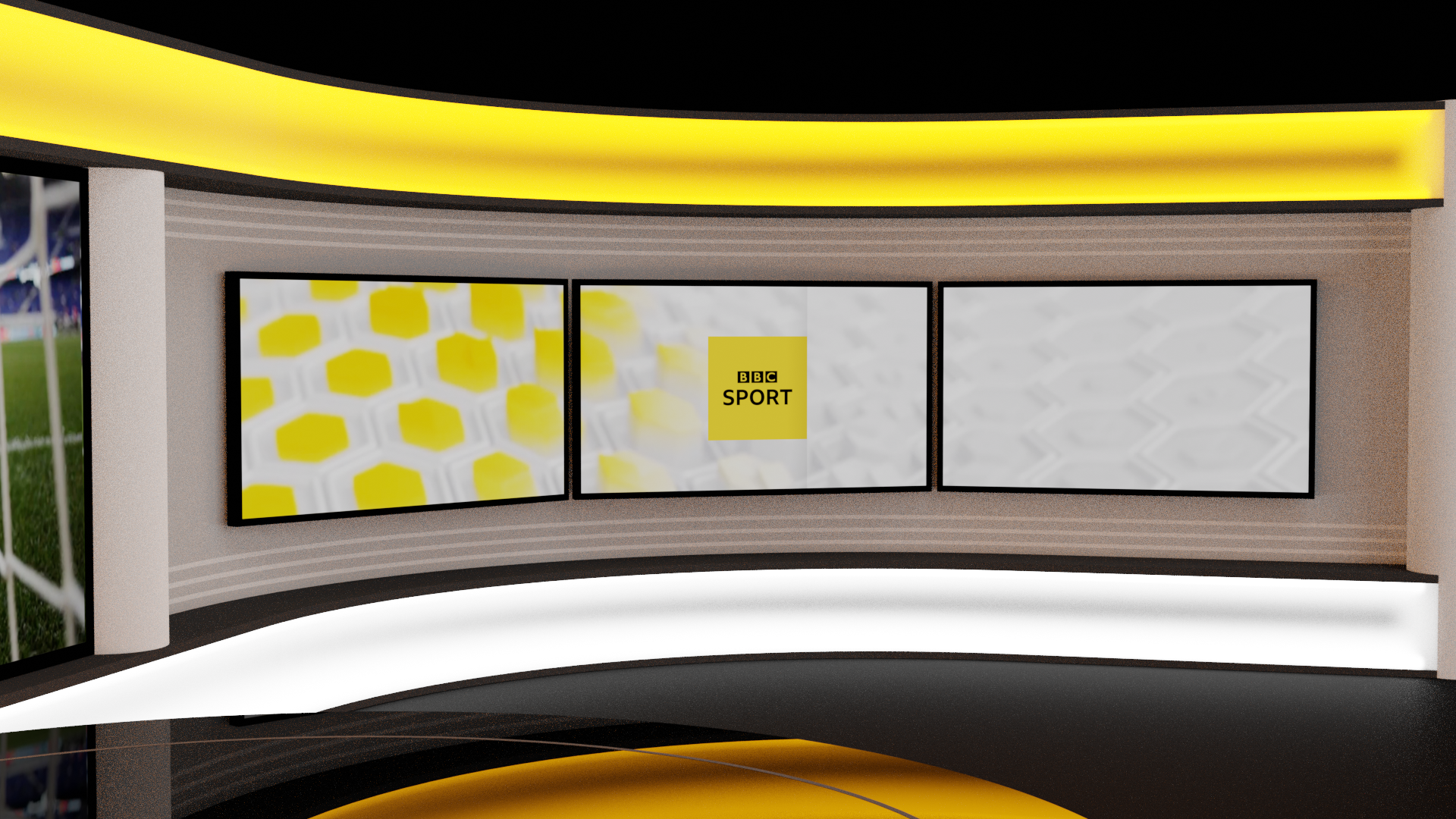 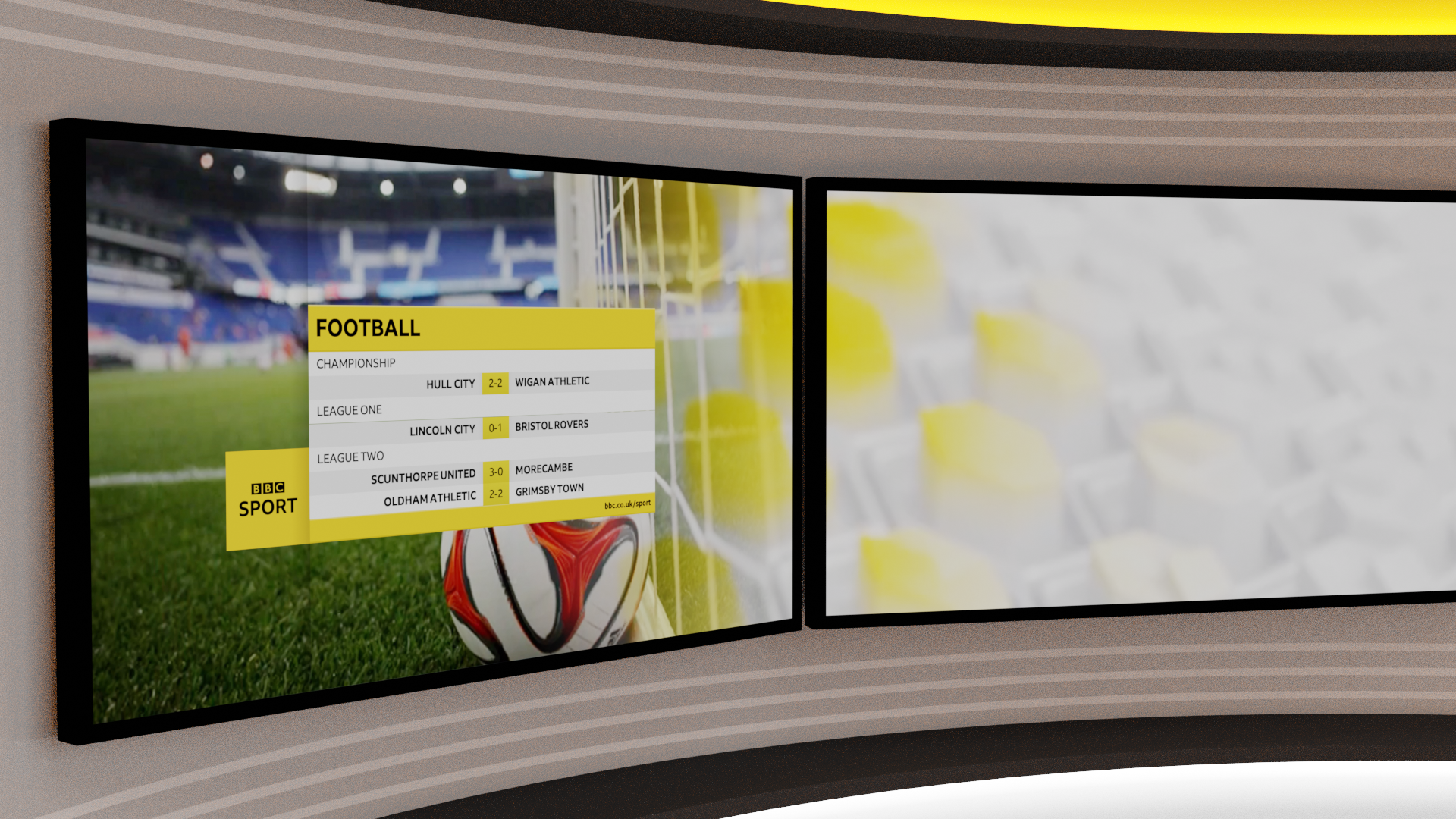 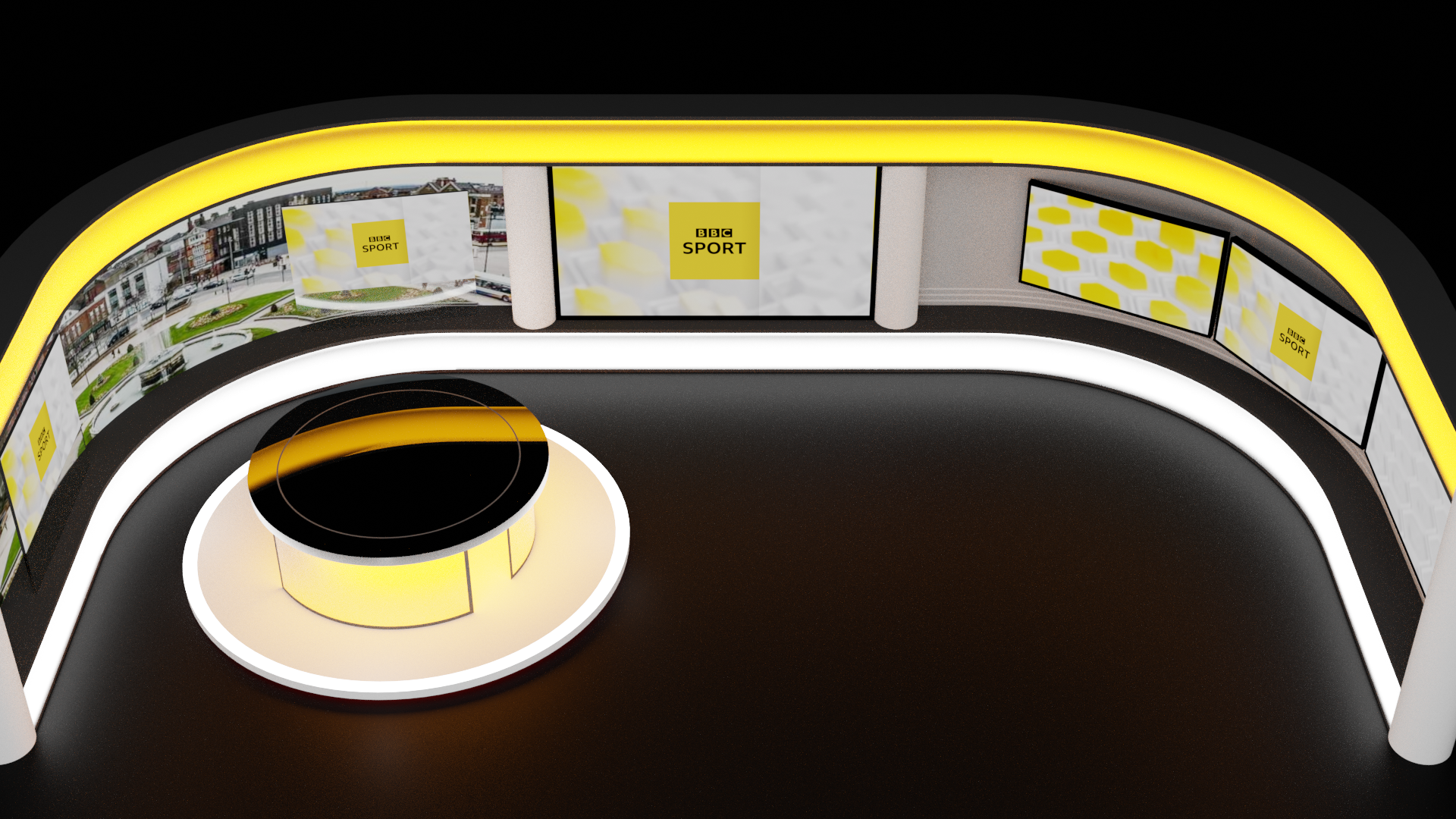 Hope you like these, and while this isn't exactly related to the main topic of The Nine branding, I'm working on the regional news side of the graphics, so I plan to make two videos for Look North, one with the actual recorded footage I captured, and the other using shots from my studio, along with a few other regions 'Nined'.
Last edited by PATV Scunthorpe on 20 April 2020 11:08pm - 4 times in total
TV
TVLand 22 September 2019 9:47pm
Love it, love it, love it! Superb work as always. I can definitely see this design being used on air!
PP
Po6xyPop77 22 September 2019 10:06pm
The BBC should hire you as a graphic designer for them.
DW
DavidWhitfield 22 September 2019 10:49pm
Can only echo everyone else's comments. The hard work and effort you put into your mocks really shows. Incredible stuff.
BA
Ballyboy 22 September 2019 11:04pm
It says look north on the Humber bridge of the catwalk close up did you do that yourself?
DK
DanielK 23 September 2019 12:50am
I love the set design! Slick and simple. I’d make the middle screen mobile so that it can be angled out or moved entirely to make each side of the set more flexible.

I think Scotland can do this on their set.