An idea to see what an experiment with two decades of news identities... (November 2020)

This site closed in March 2021 and is now a read-only archive
Previous Next
CC
C.Channel04 26 November 2020 8:01pm
So, I realised that it has been ages since I posted here, and during that time, the year seems to have gone by, a long way! 😂

Anyways, having shared my interest with the 1999-2003 identity of BBC News, an idea that came to my head was "What would the News look like if I fused the current graphics with the colour scheme of those days gone by?". I decided to set to work, yesterday, but seeing the results, in comparison to the reference I eventually used today... I wasn't exactly satisfied, let's just put it that way...
So, it was back to the drawing board, and using reference photos certainly helped me get the design that I think I like an awful lot, although whether you like it is another matter. 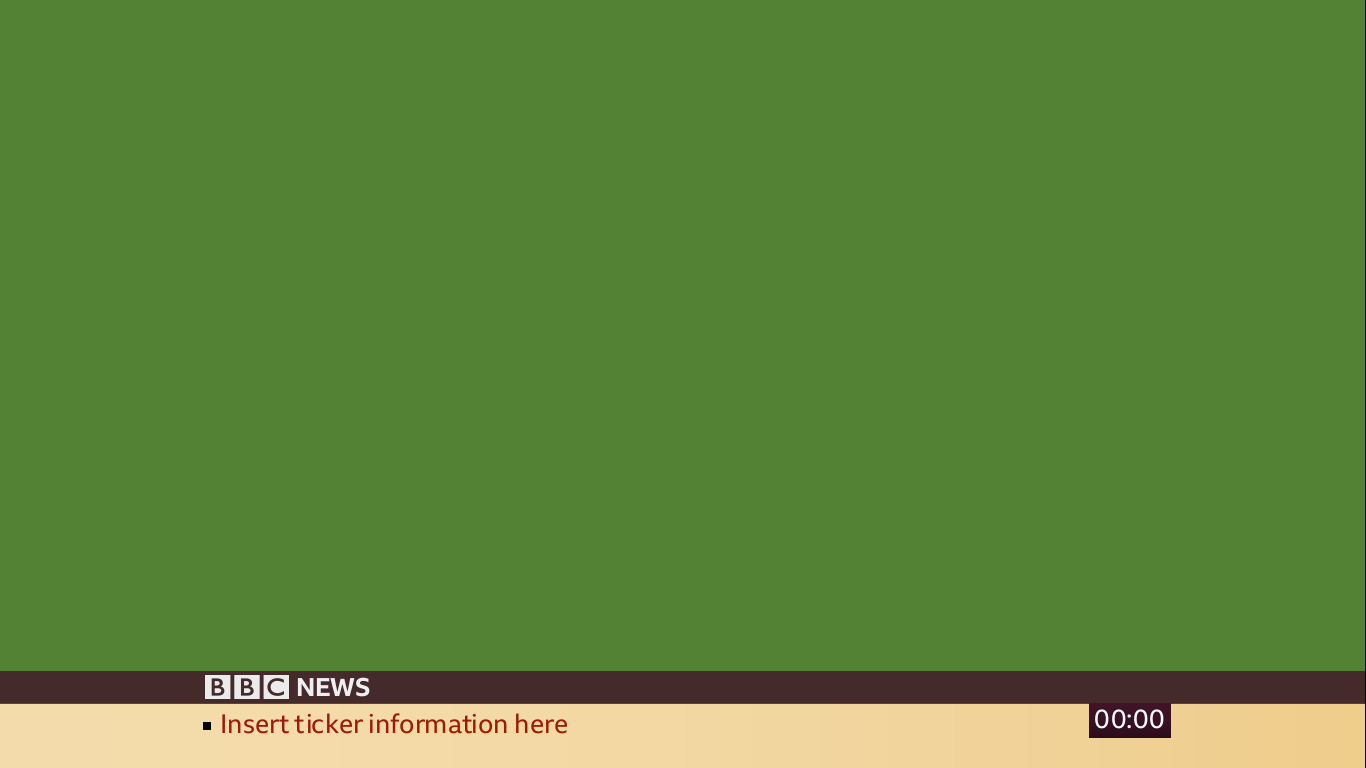 So... where do we start? It's a return to the cream and dark red colour scheme, although the colour(s) gradient of the clock is reflected in the main bar, which contains the News logo, without the familiar red box that we are used to, these days. For facts and figures lovers, I made the ticker text size 18px, which, I think, is the same as the ticker on the current graphics, but then again, I could be wrong... 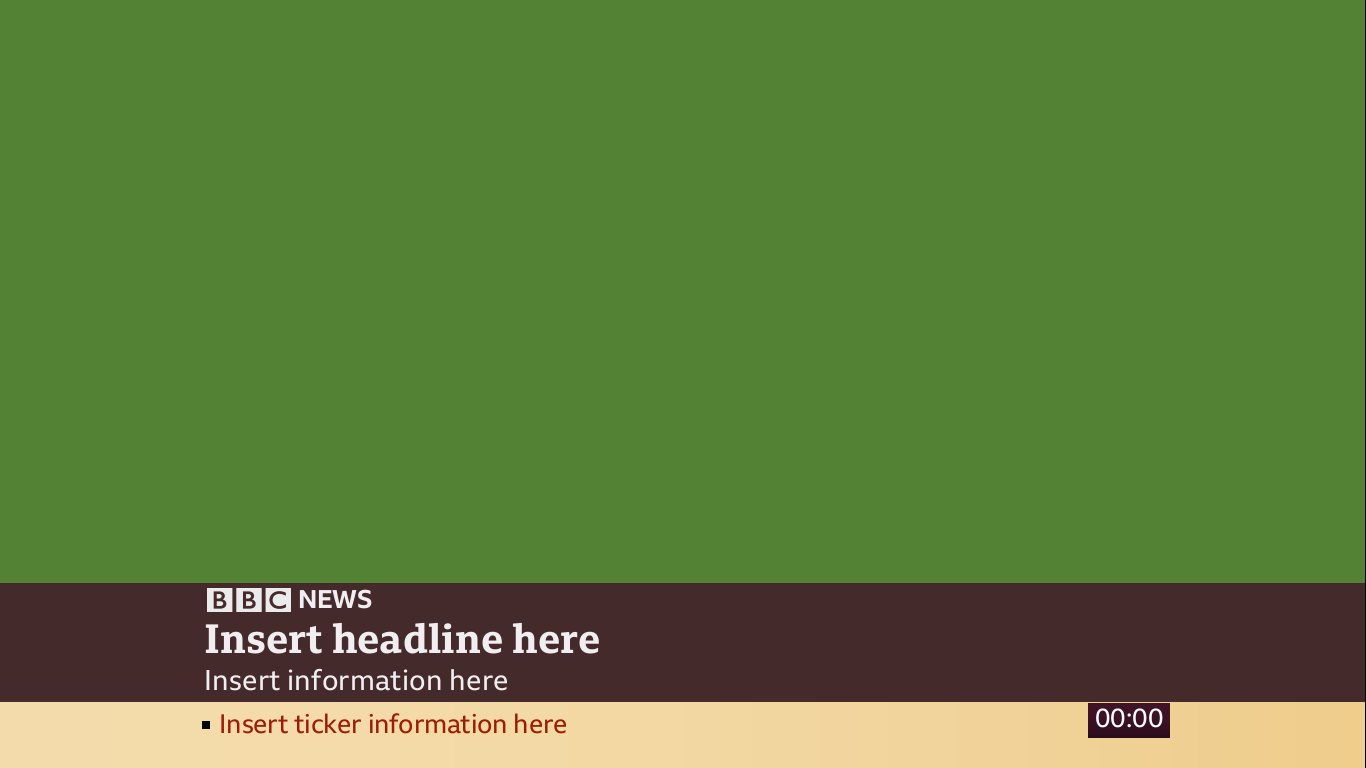 By the way, if you happen to see things look out of place, slightly, it's because I added animations to the parts of the graphics. It's annoying, but then again, I tried to make it perfect, but it did little. Anyways, the main headline text is 28px, and the information text is 20px, and much like the current branding, the Reith Serif and Sans fonts are used for each appropriate piece of text. (By the way, I learnt that you could download WPS Office on a Chromebook, and download fonts to it) 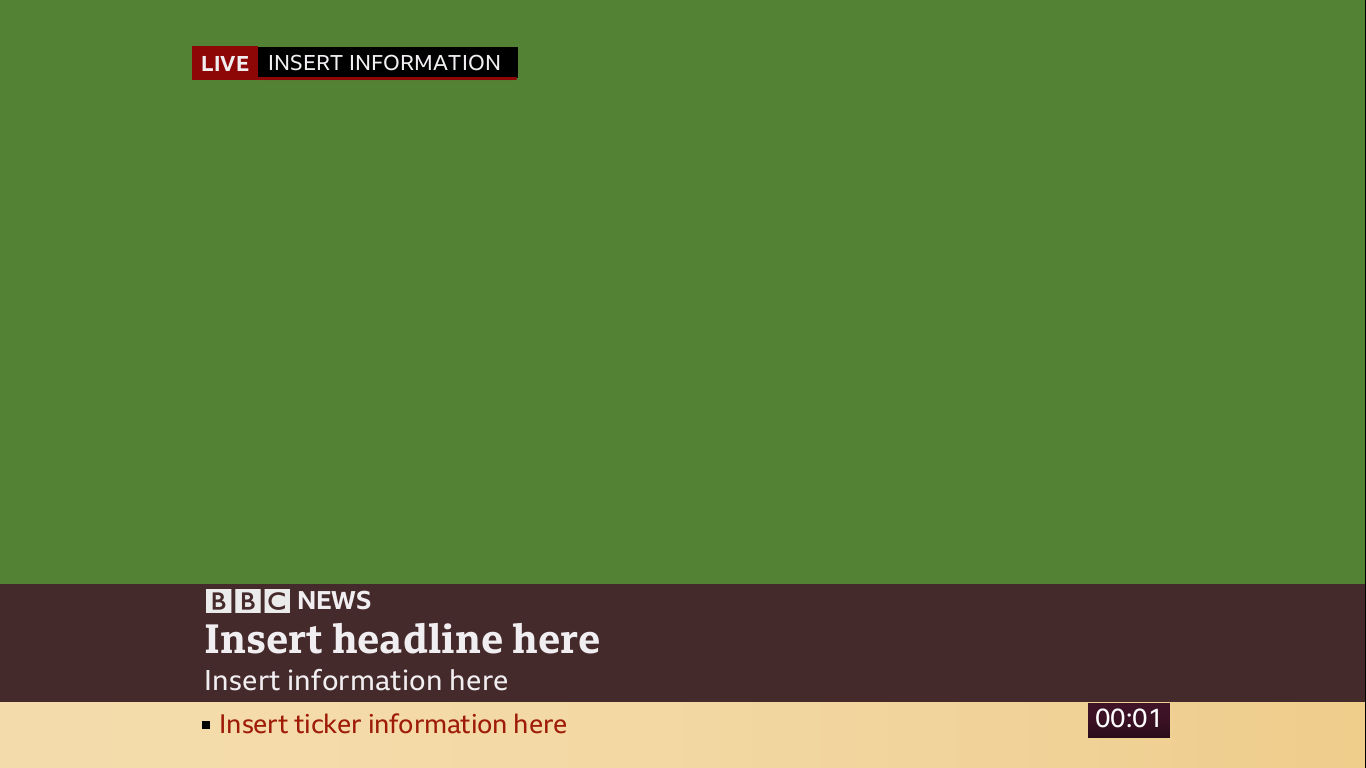 The LIVE bar may seem unchanged to some people's eyes, but, the red is darker, and the black box for the location information is now solid. Both of the text in these boxes is 15px, and again, they are similar to the sizes seen on the current graphics. 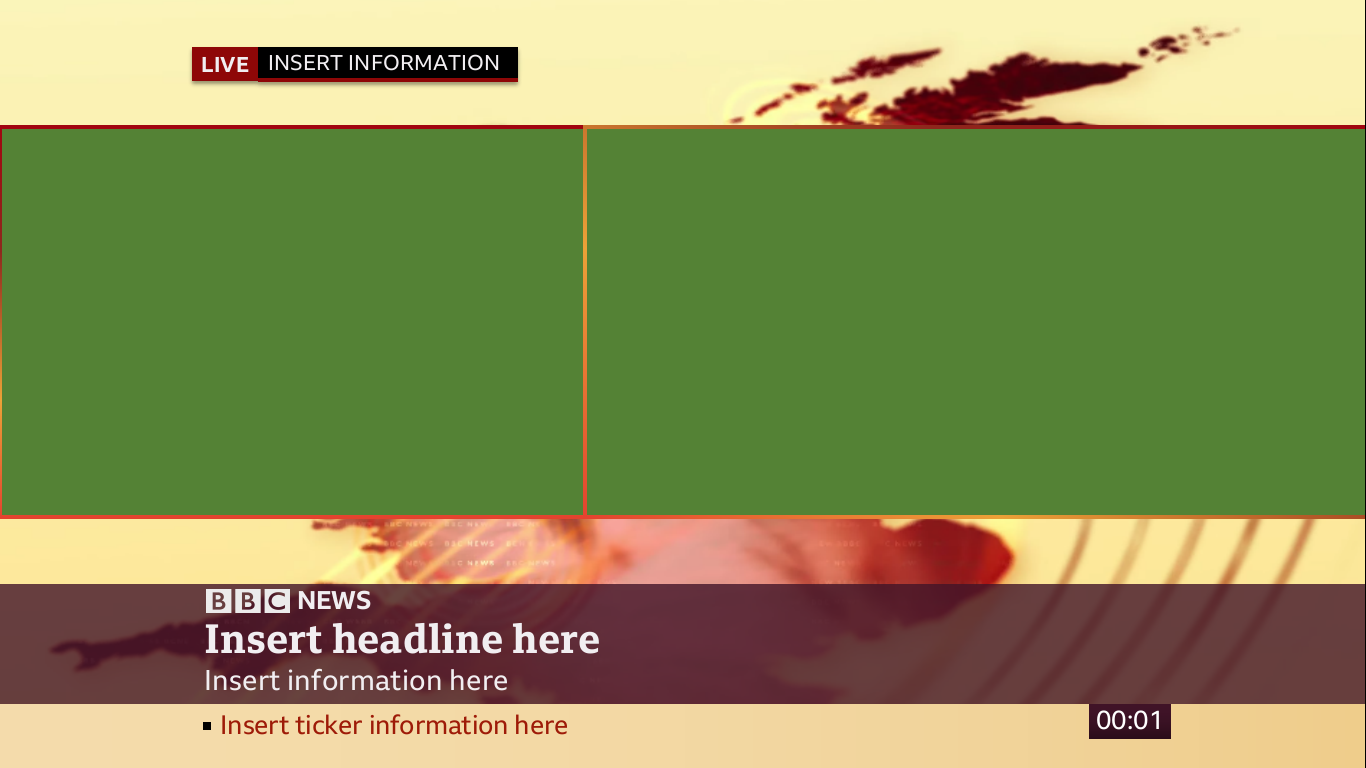 This is an idea for if some footage is shown during someone talking from a live location, like with the news of England's win at the Cricket World Cup last year. The background may seem familiar, as it is the UK map from the remake of the 1999 News titles (the copyright of which goes to mdtauk - I do not want to get kicked in the backside for not crediting someone - that happened somewhere else, and I've learnt from that mistake! 😬) 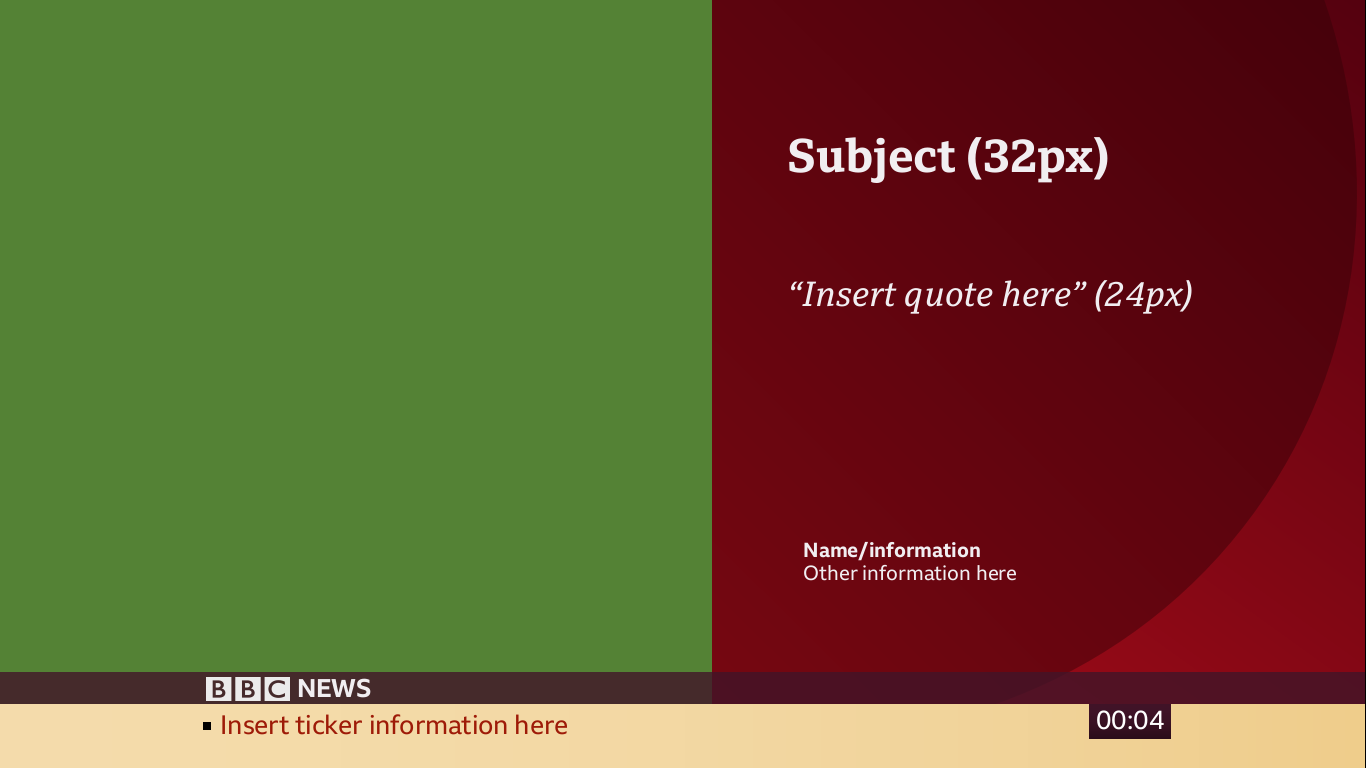 Here is one of my personal favourite designs, to be honest - a slide for quotes, since I watched a video of the 2019 refresh, and it included the slide, in the changes of graphics. The smaller text, seen near the News bar, is 14px, although the rest of the text include their sizes. 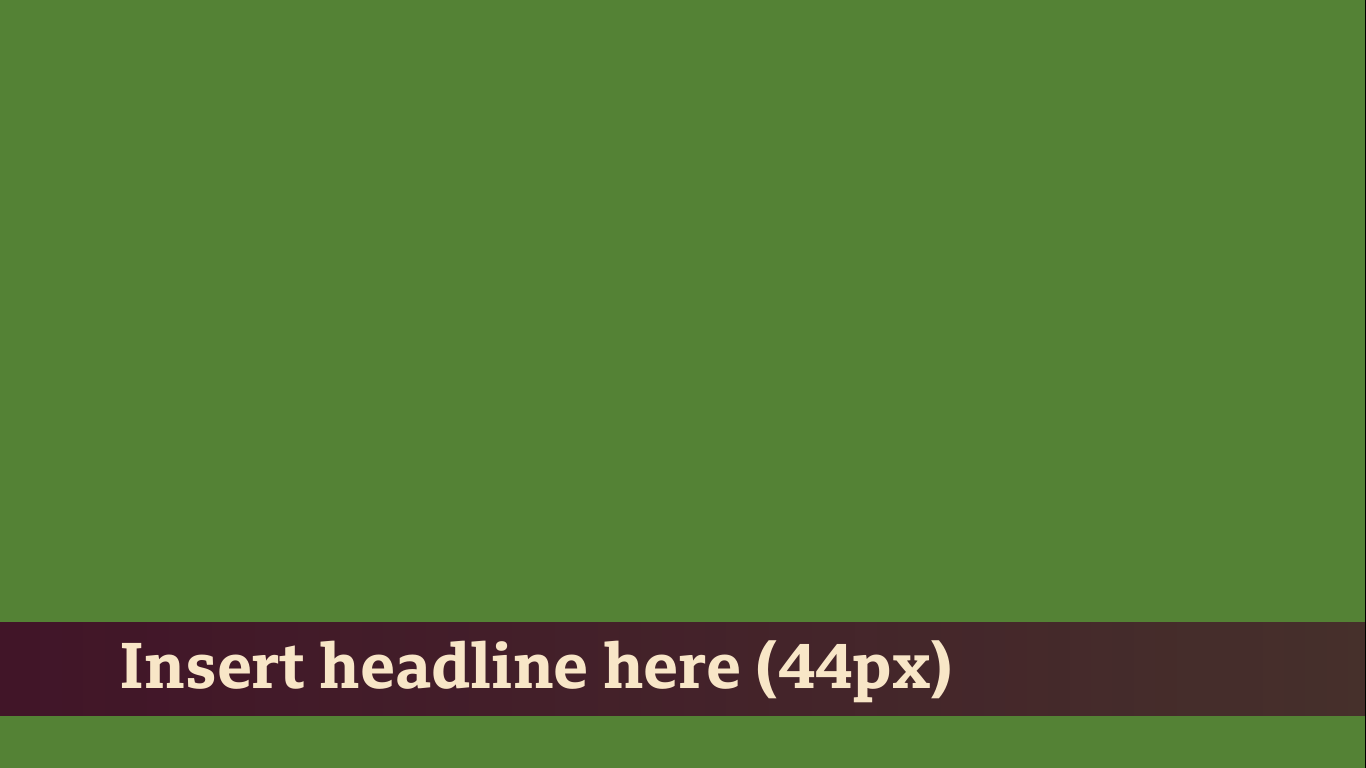 Now, I'm no fan of the way the BBC show the news headlines, so, this here is a redesigned version for this custom idea. It's based on the previous identity (2012-19) bar, which I prefer greatly. One of my friends suggested a purple box, and cream text, as well as a cream globe, as a shadow behind it (which I haven't added, since it's a bit of a complicated matter). 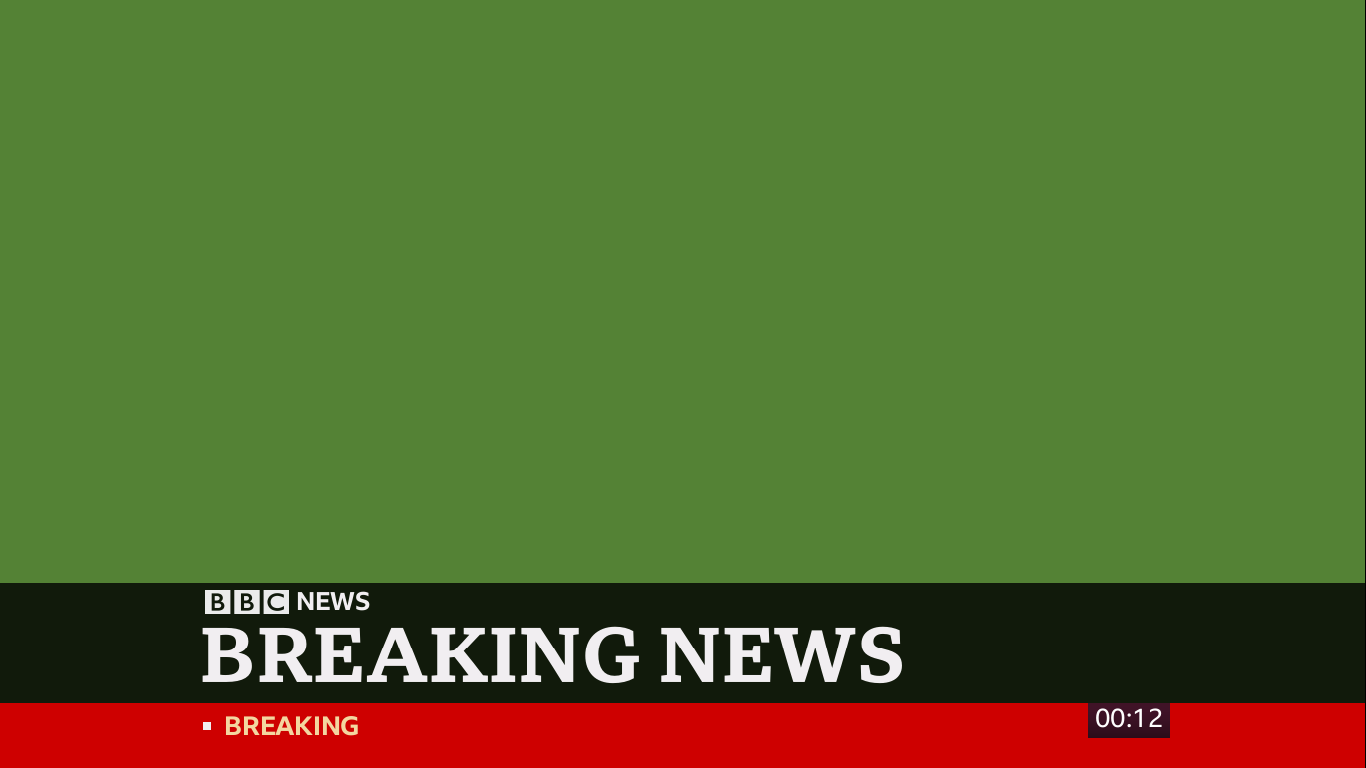 Hold up! What's just happened at 12 minutes past midnight? A story just in has made the breaking news style of graphics appear on-screen. The purple main bar turns black, almost like the location box of the 'LIVE' graphics, and the other area where you see the ticker text, swap colours, although the clock box remains the same. The main text is 54px. 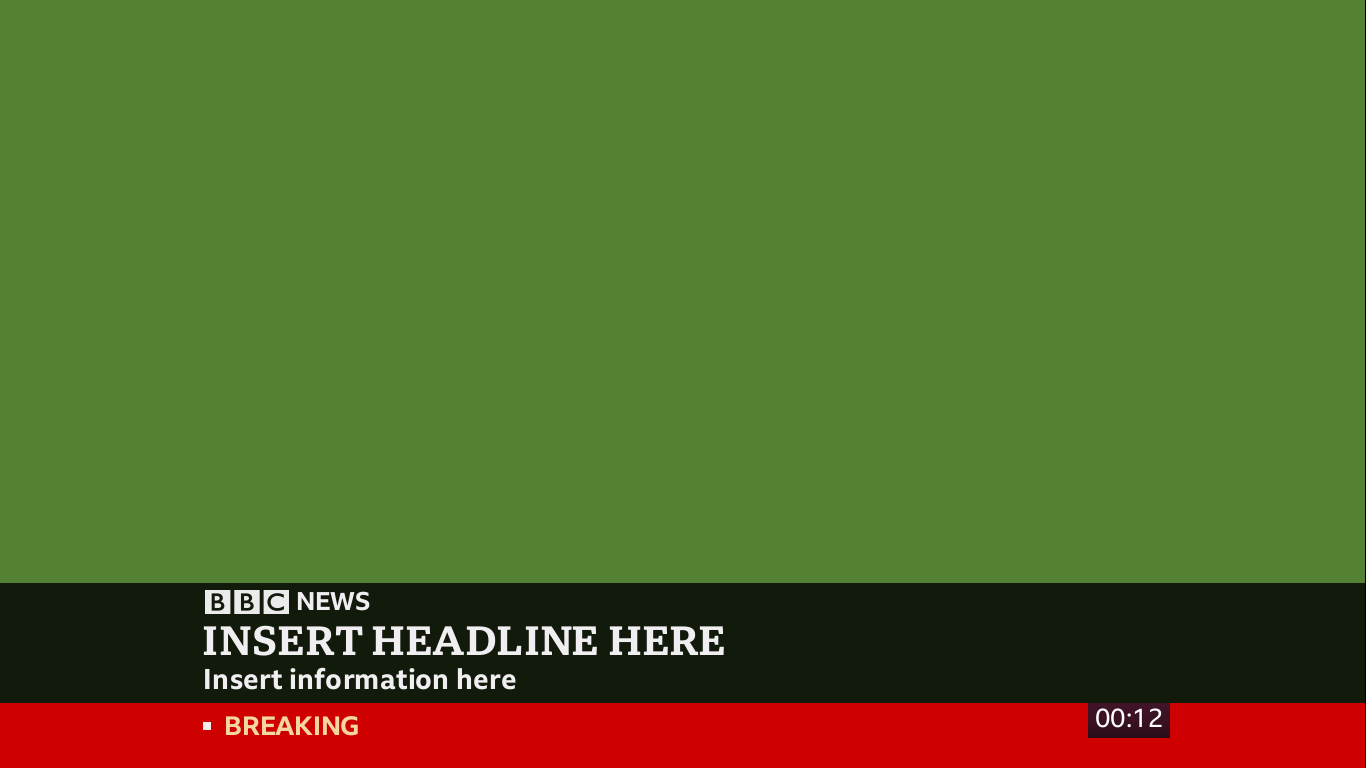 The last photo (so far) shows the text of this new story and the headline is now in cross capitals. I think I prefer it to the ordinary style for other stories, as it grabs people's attention, and lets them know what has just happened, or what's just in.


And there you have it! That is my idea for a custom design of the BBC News, which would extend to the News Channel, Parliament and World News.

Any feedback or ideas for changes will be greatly appreciated, and I sincerely hope you all like it! 😄
JL
J. Lyric 26 November 2020 8:21pm
Huh!

You know what - this looks neat in my eyes.

Hmm...
I haven't really looked at the "Virtual Glass" era, but I'll see what I can do when time permits... 🤔
CC
C.Channel04 27 November 2020 7:55pm
So, taking into account J.Lyric's suggestions for changes to the design, I've changed things around. 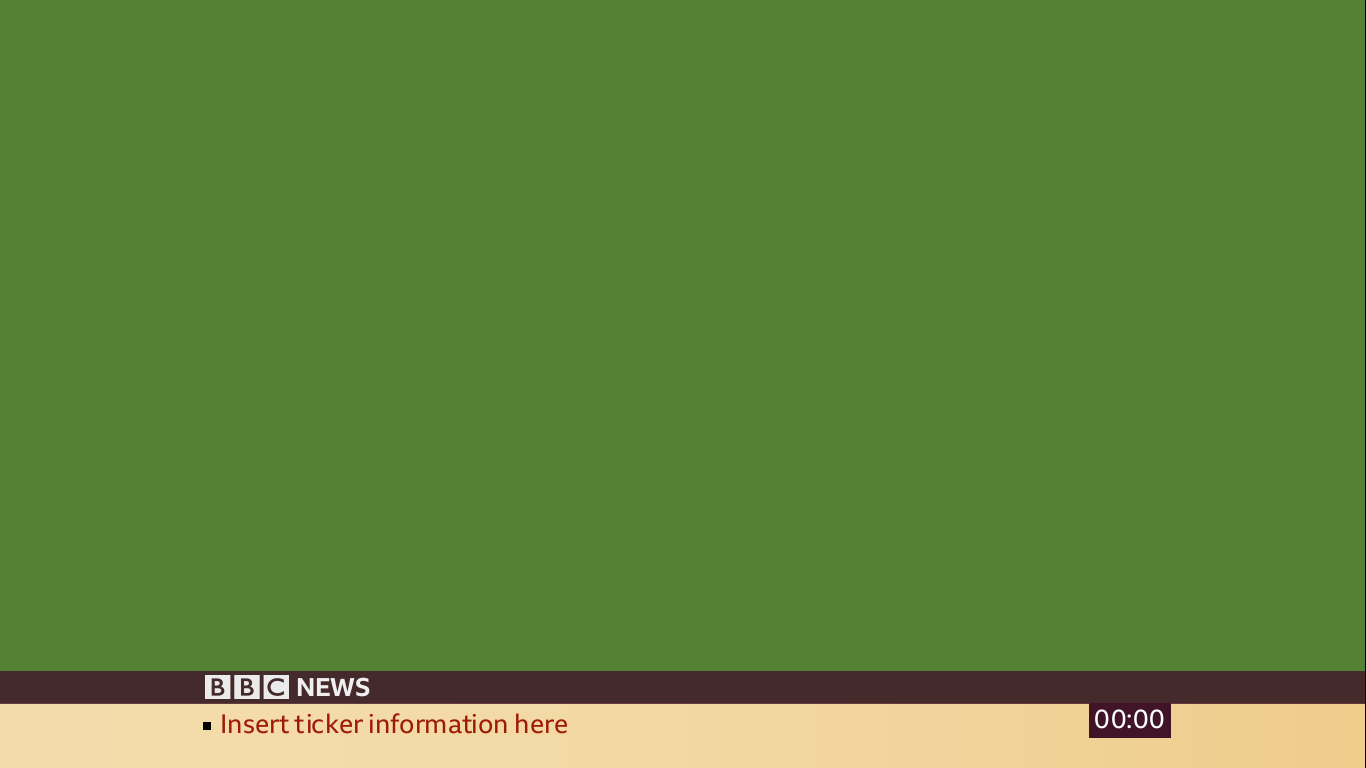 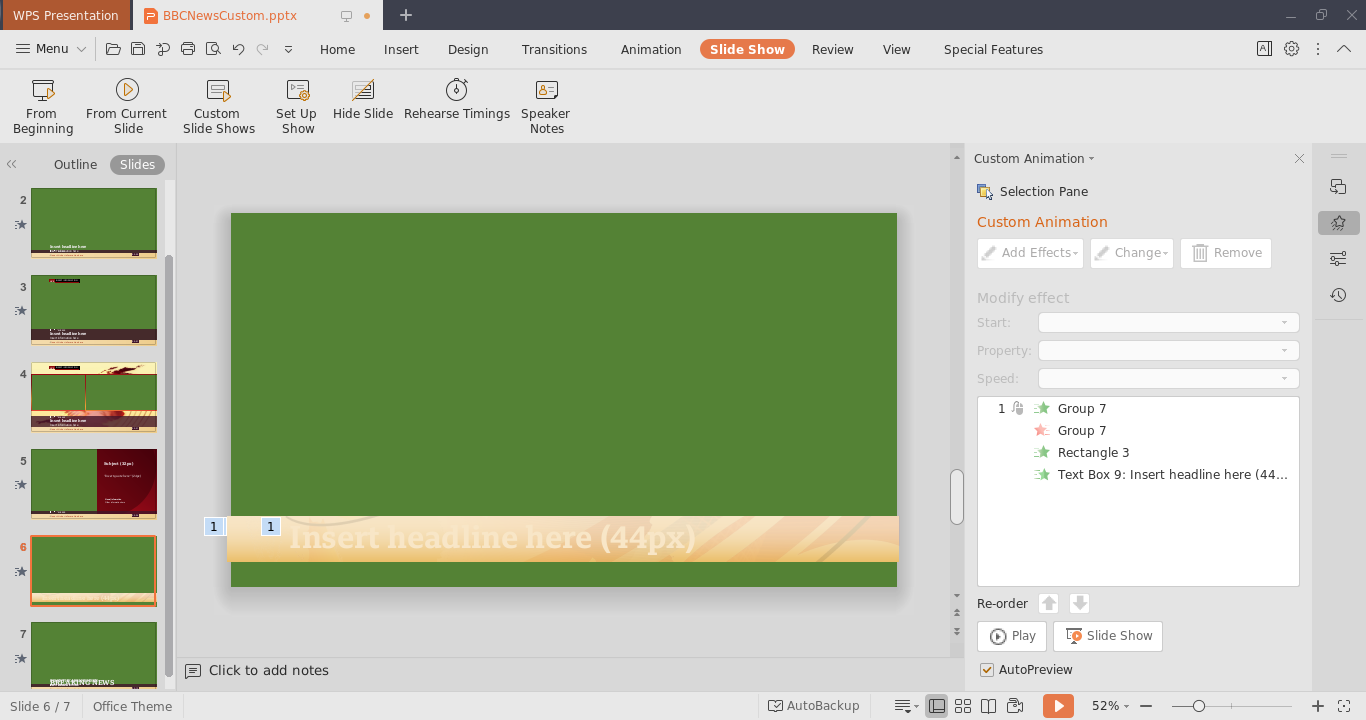 Also, I changed around the animations for the headline and included the globe on the cream box that wipes upwards, similar to the animation of the bar beside the headline and News logo in the current branding. However, the speed of 0.3 seconds makes it a blink-and-you'll-miss-it touch, so I decided to show you what it was like, also providing a sight as to how I constructed things. 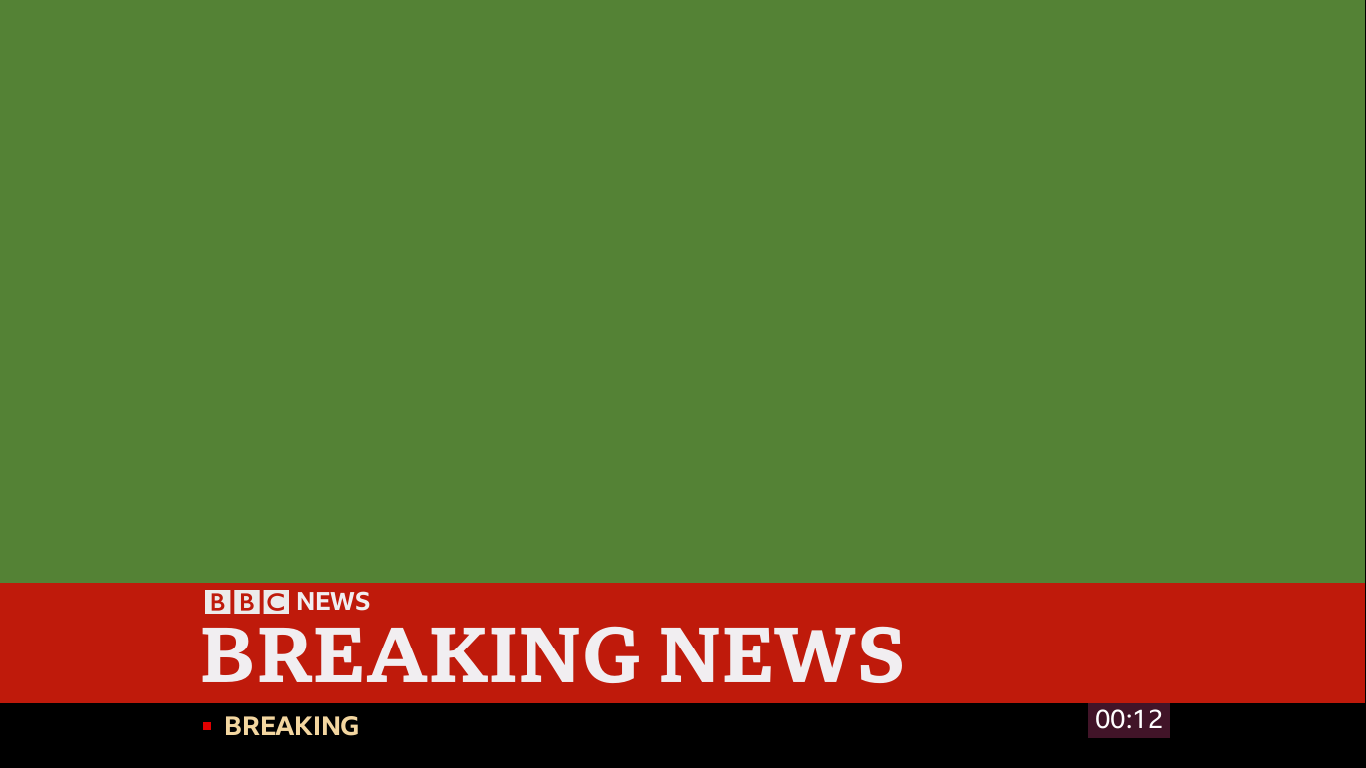 The last change that is showcased here is the Breaking News design. The colours have indeed been swapped, although the colour of the small box beside the ticker has been changed. You can also see the solid colour of the time box more easily, here, as well. 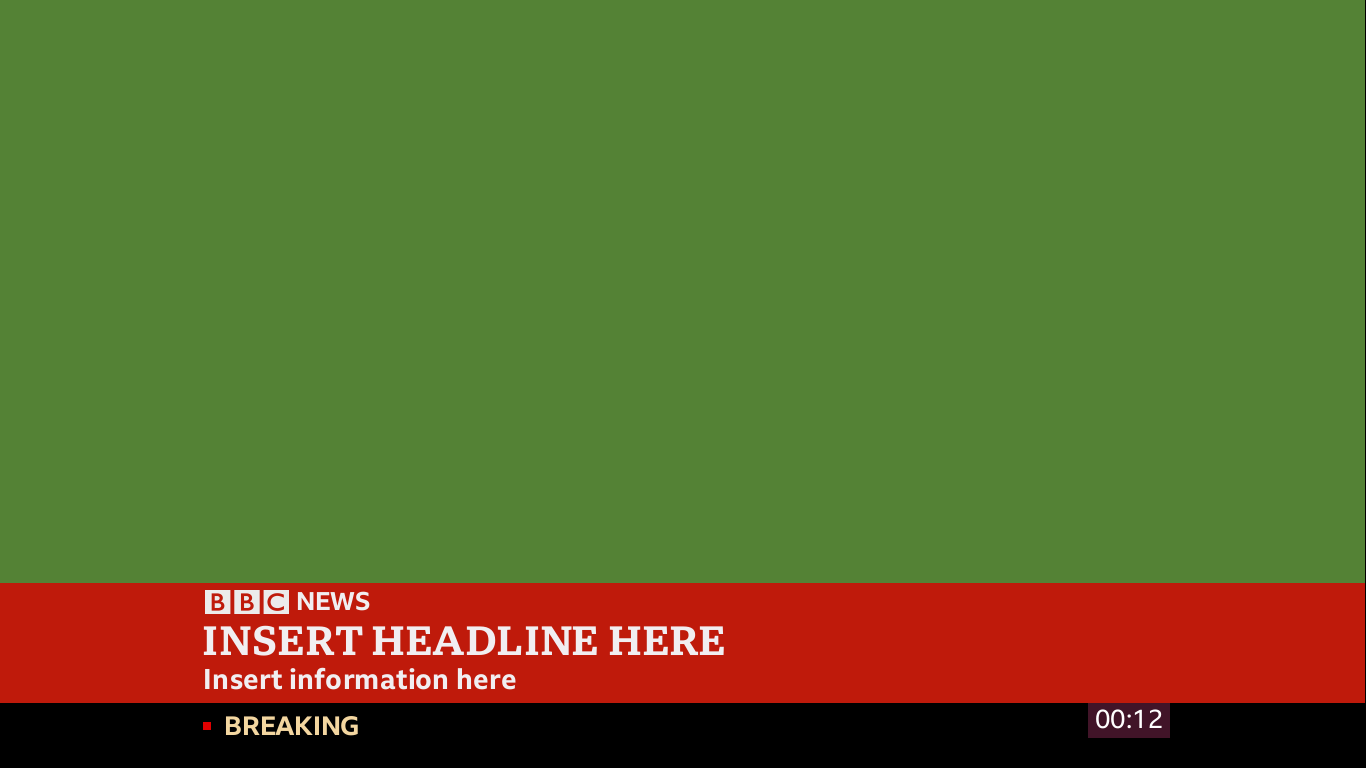 So, that's all the edits I have, at this moment. Again, feedback and suggestions will be much appreciated, and I hope you like these changes!
DM
DeMarkay 27 November 2020 7:59pm
Nice work so far.

Any chance of a title card?

Any chance of a title card?

By the way, do you have an idea for the title card, and also, where would the logo go? I'm asking so I can get an idea as to how to design the titlecard.
CC
C.Channel04 28 November 2020 2:41pm
Another new addition to the design plan: nametags, for the normal News bulletins. I realised I was missing something, so I decided to set out designing. 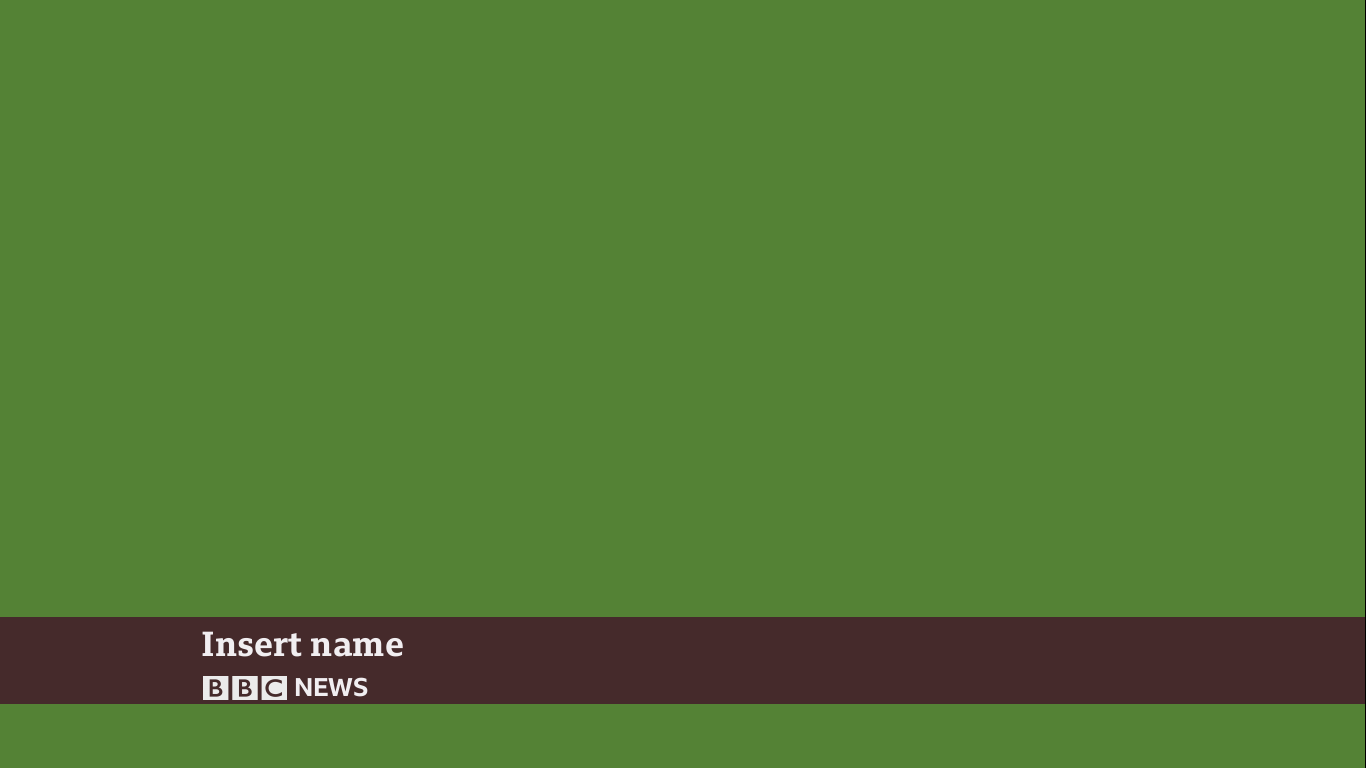 This nametag has just a name, for members of the public with no additional information for them. 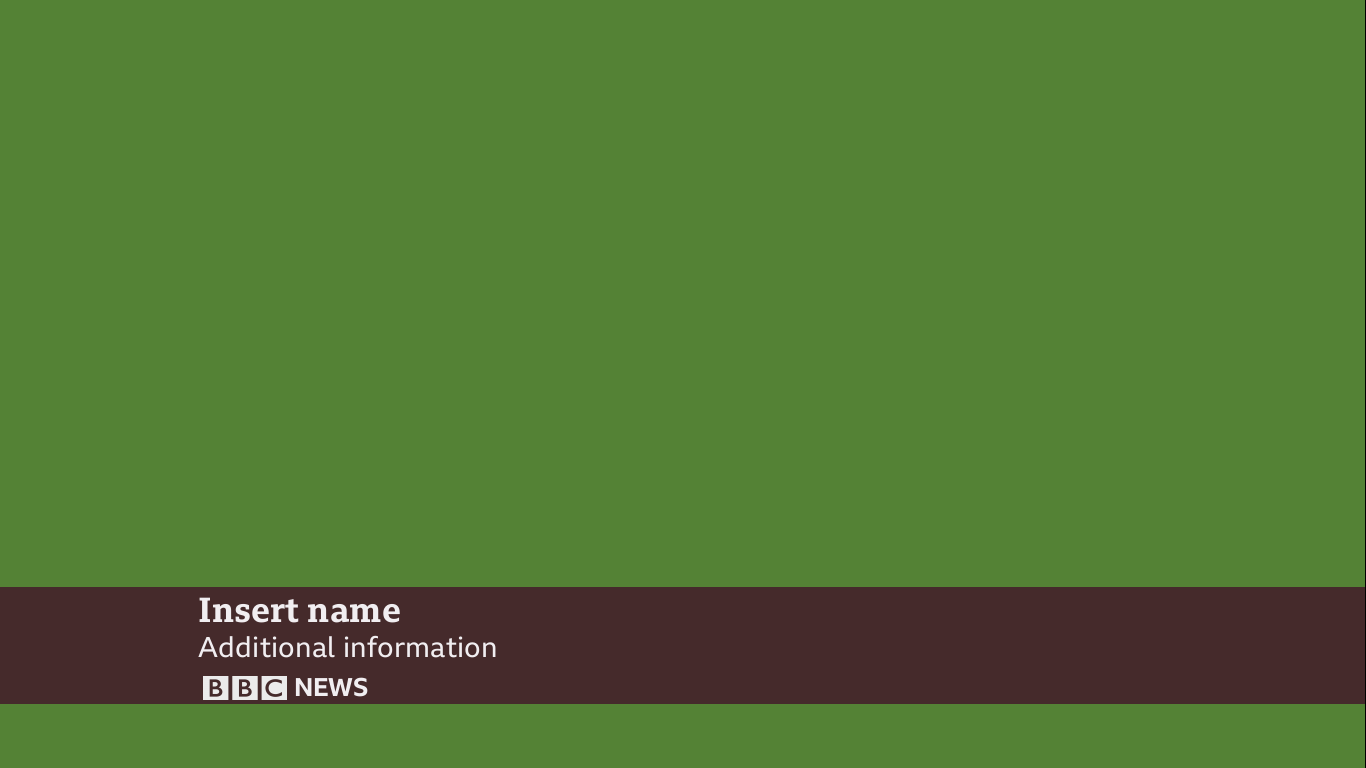 This nametag has additional information - say, for celebrities or Members of Parliament, or even reporters without social media tags. 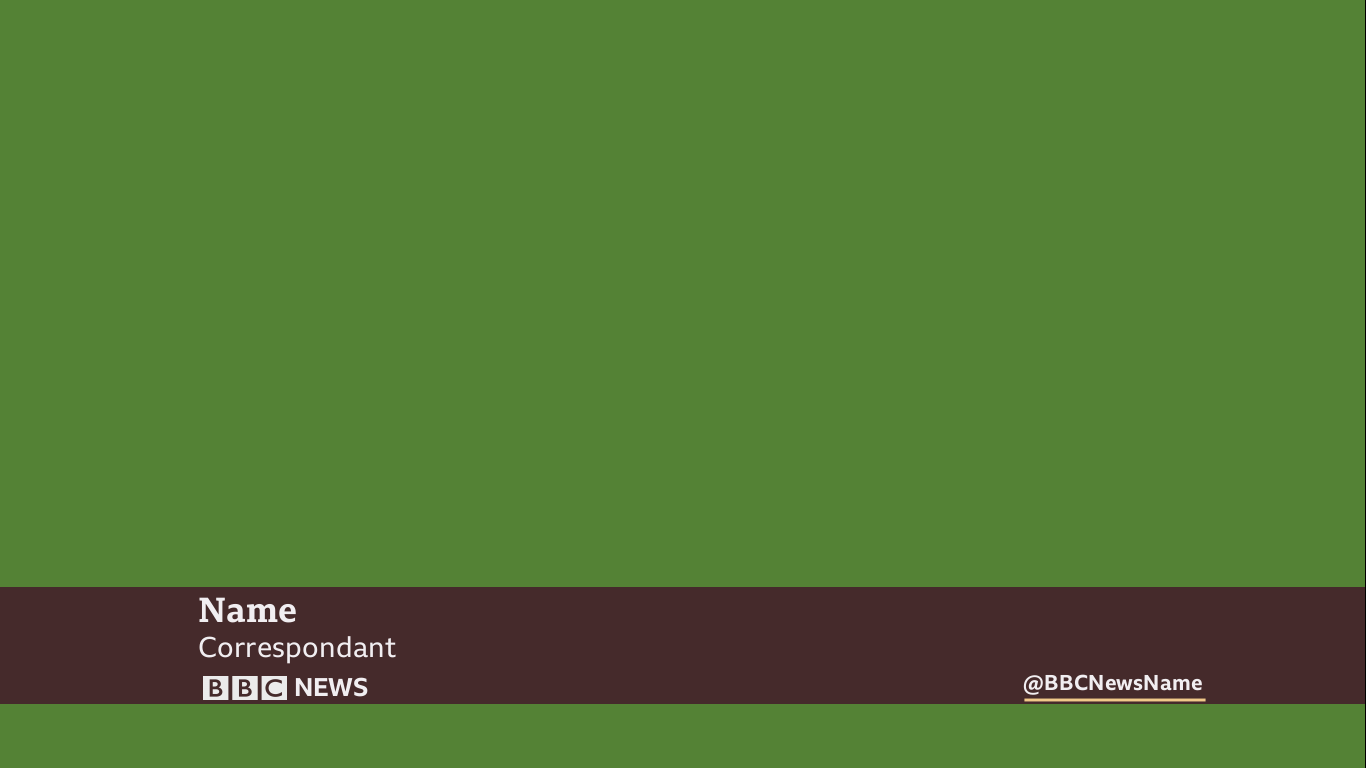 Finally, this nametag is for reporters, alongside their social media tag. The animation for it would be that a red line would wipe in from the right, which would change into the cream line you see here, and the social media tag would peek in from above.

And with that, that's all for this addition to the design!
CC
C.Channel04 28 November 2020 4:07pm
After looking at the 2007 BBC World ident, I did some experimenting for a new logo for the BBC News Channel, to go along with my custom design, which I think could be used as the main logo, for continuity announcements going into the News as well as other programmes, however, it could just be used for general purposes if others think that way. WPS doesn't have 3D bevelling, which is a shame, but instead, I decided to see what I could do, using the 3D modelling tools, trying to see how the crescents looked on the reference video I used. 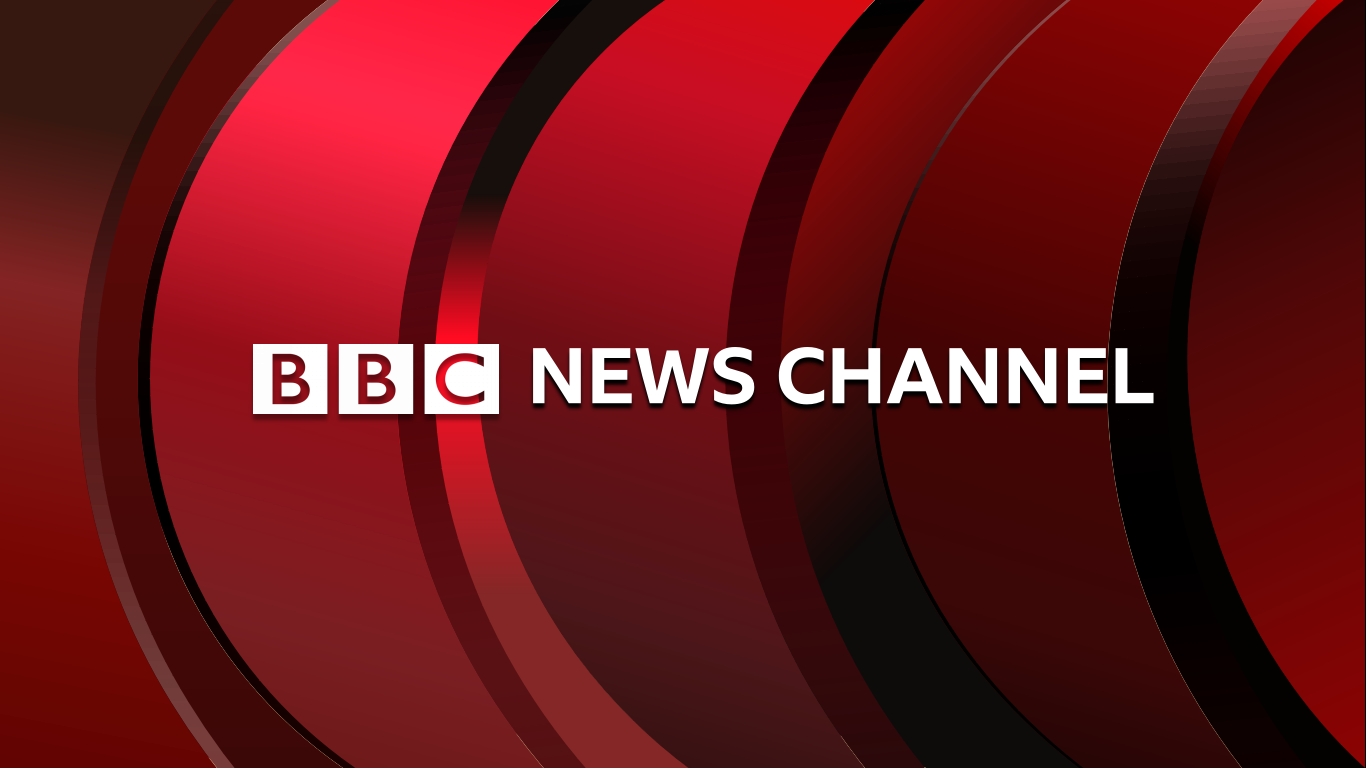 I hope you all like it, and once again, feedback and suggestions for change will be welcome!
CC
C.Channel04 28 November 2020 5:33pm
Continuing on from the News Channel design, I also continued on with some more plans, including this schedule, with the programmes here usually found on Sundays. 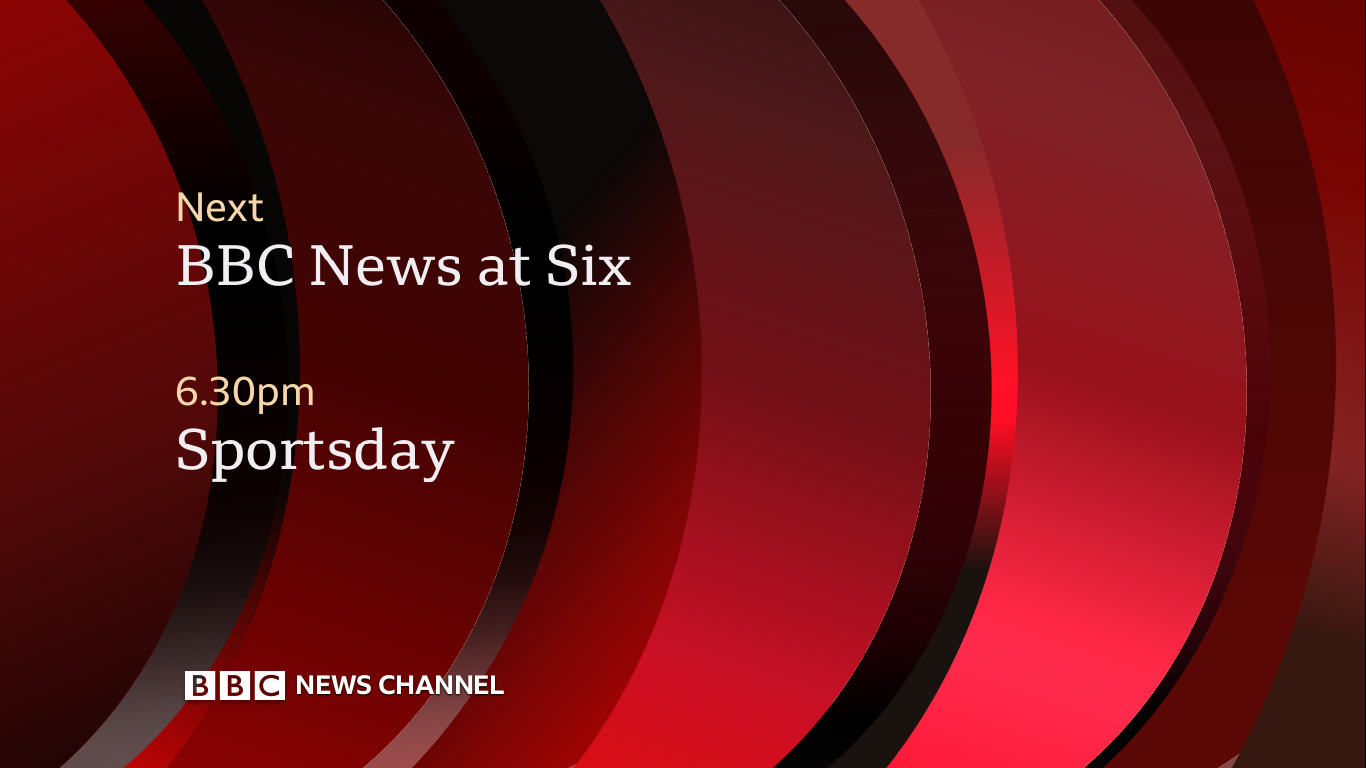 It continues on the World-based design, and yet, has some continuity with the News graphics, with the usage of cream for the timings. 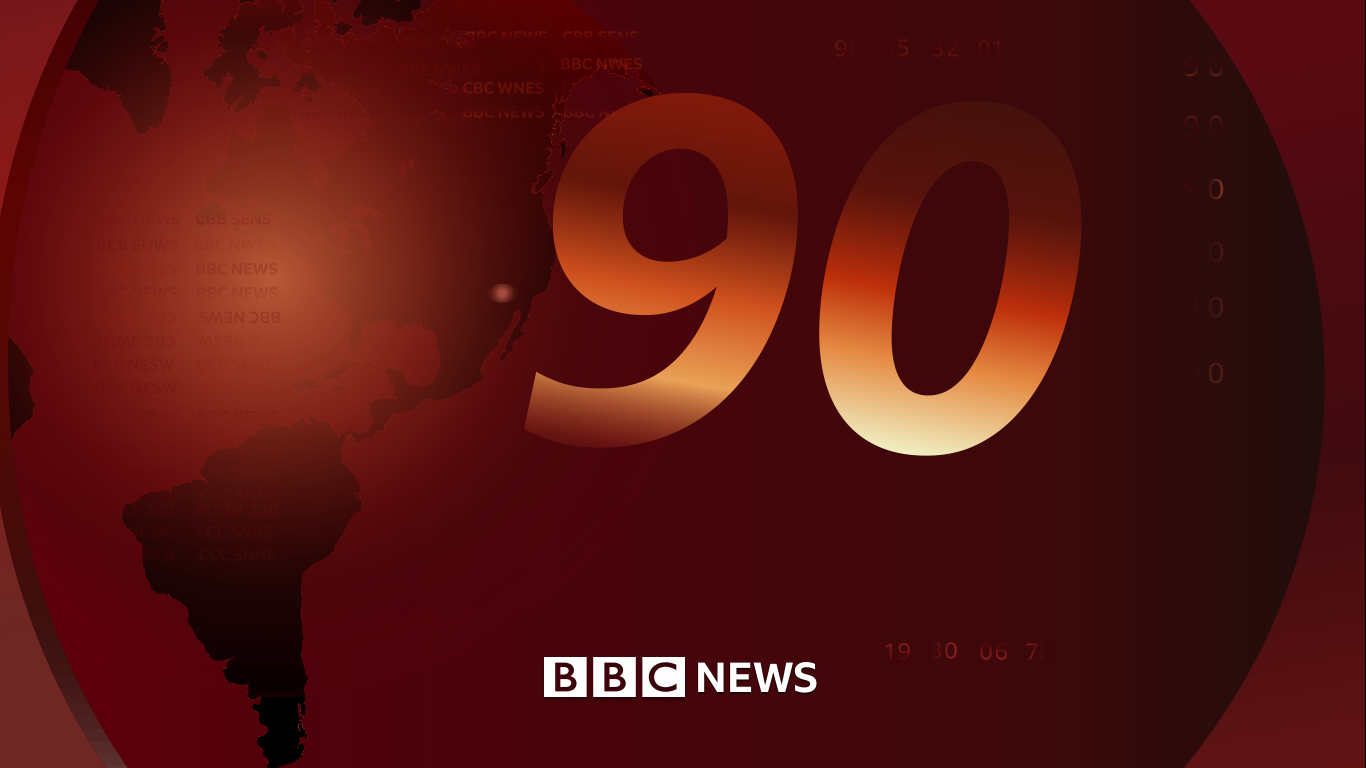 This idea for the countdown was made out of seeing mdtauk's tribute to the identity used by BBC News and News 24, as it was then, used from 1999-2003, which is a really amazing piece of work, as well as my thoughts about the current theme for the countdowns, News Gathering, which I feel has run its course, so, therefore, it's a return to the purely-graphics theme. Now, the main difference of this countdown is the map of the world, the usage of fonts, and the way the text is coloured and positioned. If it was in real life, then I would imagine that David Lowe could use elements of the 1999 countdown music with the current music, but, that's just me.

Once again, I hope you enjoy this new addendum!