Previous Next
MW
Mike W London London 5 December 2020 6:03am
As I have been self isolating and unable to go to work I've had time to expand on an idea I posted in another mockers' thread.

It's a countdown/breakfiller type thing in the style of the '2003 BBC News post global warming world' graphics (sans Clamshell) and the 1999 style decoding text, with a little bit of a twist on the 2008 'cat's cradle'.

The general idea is the area to the right would become an area for promotions, some headlines or generic trailers, how that would be implemented I don't know.

Worth developing or just abandon it? The logo zoom at the end was a last minute addition and certainly isn't final.
CH
chris Granada North West Today 5 December 2020 10:50am
I quite like the globe with the cities lit up and the cats-cradle.

I find the placing of the countdown numbers a bit off. I don’t think they’re quite centre of screen and with the second number bisecting the globe looks a little untidy.

Certainly worth exploring though.
BA
Ballyboy UTV Newsline 5 December 2020 10:58am
Very neat. The red is gorgeous. Well Done!. have you ever thought of doing a full sequence?. your work and creativity is amazing.
Last edited by Ballyboy on 5 December 2020 11:09am

AaronLancs Granada North West Today 5 December 2020 11:16am
Good concept. Try to center the number on the left on the globe to make them stand out more or move them to the right and recolour them. I'd say a decent "work in progress" if this is what it is, Well done.

P.S. Keep the logo enlargement thingy, it really acts a bit like the thing when the BBC World 2003 countdown went into ident mode in the last few seconds.
Last edited by AaronLancs on 5 December 2020 6:39pm

Rexogamer London London 5 December 2020 5:28pm
I agree with the suggestions to centre the number in the globe as that leaves plenty of room for the proposed promotions/etc. Other than that, a very solid start - I say continue

Arqiva, just switch to DVB-T2 already...
BR
Brekkie Wales Wales Today 5 December 2020 11:06pm
Agree the clock should be in the globe. Colour is gorgeous - not keen on the logo repositioning at the end, that seems unnecessary.
So what will Metropol talk about now?

Michael Power World News 6 December 2020 11:46am
I think the logo moving at the end should be faster, Overall very pretty though!

AndrewPSSP London London 6 December 2020 11:05pm
I feel like on the last crash, it could work well if the logo had some sort of glow to it, with the glow fading away..
I think the BBC have done something similar (logo glowing for a split second on the last crash) before but can't quite remember where it was...
At school they taught me how to be
So pure in thought and word and deed
They didn't quite succeed
ME
mediachris Anglia (East) Look East 8 December 2020 9:22pm
I think the BBC News logo at the end should zoom out to the lower thirds where they'd normally have the channel DOG and the headline banner.
MW
Mike W London London 12 December 2020 1:57am 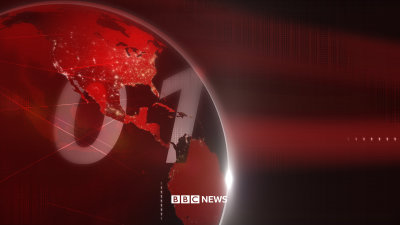 Just an update on progress to date (this is a still of a frame from the render as I'm having issues with AE at the moment).

I've moved the camera position so the globe is closer, and made the city lights react to the shadow of the earth. I need to tighten up the cat's cradle within the globe, frankly it's a headache!

The countdown numbers have remained in roughly the same place, but are now mostly inside of the globe (I wanted to make it feel like it has its roots in the 1999 countdown sequence).

The logo now animates differently (and you can't see that in a still image) so it slides out of view and back in, similar to the headlines text on the current graphics package.


This is how far I've gotten, I'm still not 100% with the idea of having the cats cradle within the globe (might be to do with how I'm cheating certain elements, but it's so slow - and some of them have become disconnected from where they're meant to be).
FA
fanoftv Central (West) Midlands Today 18 January 2021 8:38am
That countdown looks stunning Mike.
For me, the only thing that didn’t quite feel right was the logo appearing at the end; either it needed to be a little quicker, closer the end of the music or a different style of animation.

Bravo though on the main countdown, you are incredibly skilled.