I agree on the clock, but do you mean I need to change everything to Helvetica or only the clock?

Well with BBC News using Helvetica on astons etc, it would annoy me that they are using Gill Sans (although I'm no big fan of Gill Sans)
FI
FrancisIdents 5 February 2015 9:33pm
I actually really like Gill Sans on the news straps, it looks fresher, it fits in with the brand and it looks more modern.

The straps are really good, the style, the colour... while I do agree the clock text should be a little bigger, I'd be more than happy seeing these on screen.

4 stars. Would be a 5 with some animation

Not keen on the dark grey for Coming Up, particularly as you're saying you're trying to make it more Breakfasty. The black clock that launched with the new look in 2009 was changed a few weeks later for that very reason.
MF
MatthewFirth 6 February 2015 9:45am
I don't like it. The colours are ok, but it needs to stand out more.
DO
dosxuk 6 February 2015 4:57pm
Condensed text and small font sizes is a definite no-no.

I'm not sure where you're going with this. If it's just a re-colour of the normal graphics, you need to be using the same fonts.

If it's not supposed to be the same design as current, you need to make much bigger changes - as it is, it looks like a poor recreation of the current graphics. Just look at the reaction the other day to Look East using the wrong font in one bulletin.
AS
ASO 6 February 2015 11:09pm
Surprised that your still not using Helvetica despite what people have said. I just want to reiterate what dosxuk said: Either make bigger changes or a more faithful recreation.

That condensed font is criminal.

Edit: I do like the theory behind it and agree that it needs to be improved 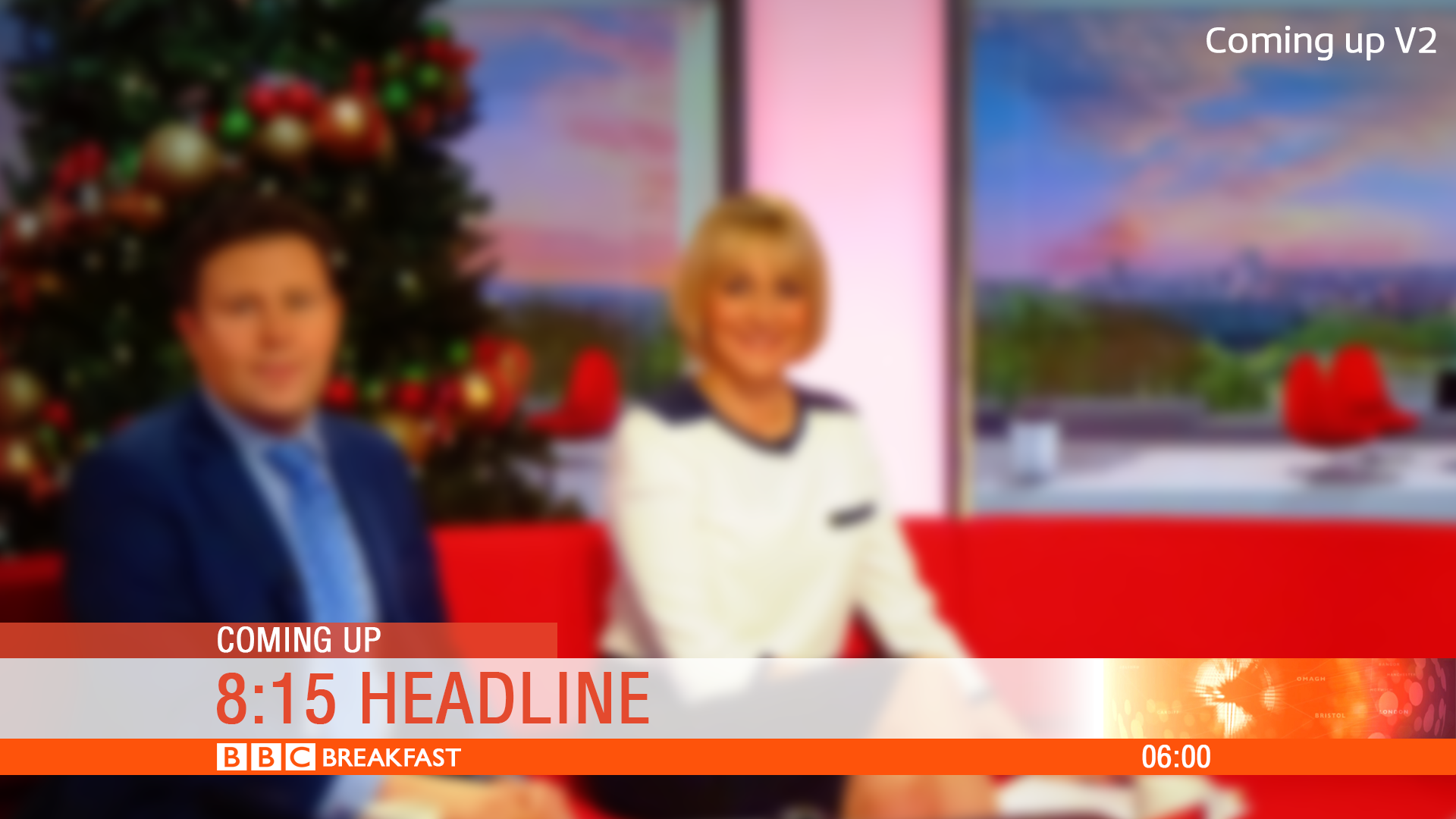 Looks more like The Co-Operative than BBC News. If you're going to use Helvetica then don't use the condensed version.

As that stands the only thing that lifts it past 1 star is the implementation of the globe at the right. Sorry.
BR
Brekkie 6 February 2015 11:43pm
AxG posted:
Should be Helvetica, clock is too small.

It's no wonder fewer and fewer people post mocks here when that is the sort of response they get. I'm sure you could have made that point a bit less bluntly.


Agree though the clock is too small - don't necessarily agree about the font as ultimately I don't think that's the point of the mock - it's more the colour change and making it suit the show more, which I think it does. I'm quite bored of the BBC's quite tired no frills approach to graphics on the news - this freshens them up nicely without doing anything too radical.
Last edited by Brekkie on 6 February 2015 11:50pm
ST
Stuart 8 February 2015 1:08am
I agree with others about the condensed version of the font, and I particularly like the globe symbol being used on the strap.

This was first archived on 7 August 2015