London Lite Founding member London London 8 February 2021 1:24am
james-2001 posted:
DavidWhitfield posted:
While I personally feel as though it is a disproportionately heavy-handed reaction to close the thread entirely, it has to be said that when you've got people describing the prospective audience for the channel as "awful, whinging white/pink people" before a second of the output has even aired, I don't think that we can truthfully claim that people's personal politics had genuinely been kept out of the discussion. There's been a general tone of derision when it comes to references to the alleged right-leaning nature of the channel throughout the thread.

The other side of the debate wasn't any better either though, going on about "woke warriors" and the likes, so let's not act like all the sniping was one sided.


It was used in context of the Andrew Neil column, while the other name calling wasn't.


Digital Spy have a GB News thread if people want to talk about political ideologues.

Asa Admin Meridian (South East) South East Today 8 February 2021 12:46pm
I'm broadly in line with David's post. The only time I've contributed to that thread was to warn or ask people to keep it to presentation related matters. If the discussion is just going to descend into left/right wing or whatever Andrew Neil's latest inflammatory point is, or "whinging white people" "gammons" etc. then it's not a surprise we have closed it, and asked for discussion to be more focused on the actual presentation. I appreciate that won't necessarily be supported by those who like to use this site to regularly inform us of their political/social outlook.

mdtauk London London 8 February 2021 1:34pm
Fine line between a political general discussion, and specifically discussing Andrew Neil's marketing efforts as he prepares to launch his channel and venture.
EM
Emily Moore Granada North West Today 8 February 2021 2:12pm
I don't think there was a great deal of discussion of politics on its own, the discussion posts always circled back to GB News and its business model and programming plans. I've seen in that thread a few times where the discussion has gone off piste and descended into political debates without any relevance to TV, but the discussion yesterday seemed to be more "what's the market for this channel, will it succeed?".


I think this is the way Twitter embeds work. The effect follows on various other sites too that embed tweets, so you get the text of the tweet and then the rest of the page "jumps" after the pretty formatting comes down. Might not be much that can be done about it.
JO
Joe 12 February 2021 11:26am
VMPhil posted:
Would it be possible to make it so that Twitter embeds loading don't make the page jump back up? A bit annoying especially when you've clicked to see the latest post, start reading it, then suddenly it disappears.

I've expressed annoyance at this behaviour before for images – especially when on mobile, it's a pain when the page scrolls 'up' so much once the images load. In theory, you could solve both this and tweet issue by setting a height property, but I don't really know how you'd achieve that without first loading the image/tweet and getting the height. By the time that's done, you've got the same issue anyway. As Neil says above, the tweet 'issue' is a result of CSS loading last, which it should have course.

Asa Admin Meridian (South East) South East Today 12 February 2021 5:21pm
With a controlled upload system - where images could only be embedded on the forum in that way - it would be possible to detect width/height and store those values, so they could be set correctly on page load.

Unfortunately the height of a tweet does vary. A min-height on the unformatted block could mitigate it, but you'll still get a jump.

An alternative would be some Javascript to keep anchoring to the correct post for a few seconds or until the page has completely finished rendering.
EM
Emily Moore Granada North West Today 13 February 2021 11:18am
Firefox with the "enhanced tracking protection" set to "on" (it's the little shield icon at the left hand side of the address bar) stops tweets loading in this way - you just get the text, without the fancy formatting that causes the page to jump around as it loads. I think it's a side effect of Firefox blocking the CSS/JS loading from Twitter.

However, it may break other things especially if you're a social media user and you'd have to use Firefox, which you may or may not want to. 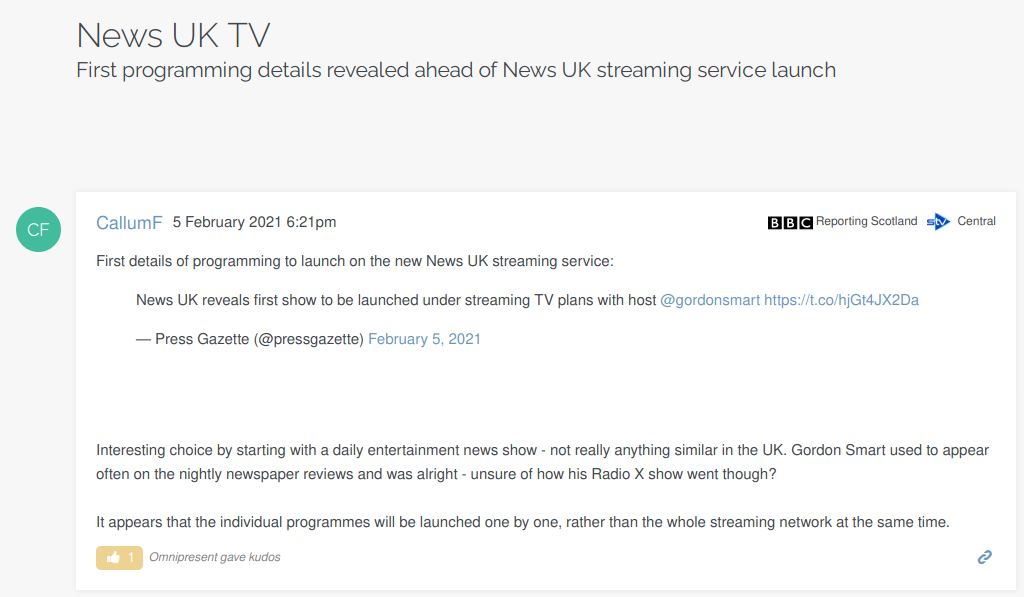 JO
Jon Central (West) Midlands Today 13 February 2021 1:44pm
I can’t really understand why the latest GB News thread has been closed when there are many other threads that are talking about editorial biasses on particular US networks. To think no one is going to comment on whatever agenda the channel turns out to have is difficult.

I appreciate the want to keep the forum as apolitical as possible but I think with something like GB News it’s a fine line between discussing business case for the need of this channel, which I think most would think would be perfectly acceptable on TV forum and peoples own political opinions. I think the ‘gammon news’ comment was probably crossing the line, but it’s different to going on a rant about the government or Brexit on a vaguely related thread about coverage of such news.

I’ve made a similar point before, that if Sky News had a policy change and went overtly right or left wing opinion based, I would expect it be commented on by people to either champion it or criticise it to some extent as it would be such a change to the fabric of TV news in the UK.

Most people find the rota discussion boring, but content of programmes is always discussed on this forum to some extent. As Brekkie said, the majority of the posts on the forum probably aren’t pres related. If Coronation Street has some rubbish scripts or scripts that offend people, is that not allowed in a thread talking about Coronation Street even though it’s not strictly pres related? In the same way surely any discussion on GB News is going to lead to people giving their own thoughts on the overall direction of the output?