Previous Next
SC
Si-Co Tyne Tees Look North (North East) 26 April 2020 12:57am
I only subscribe to the basic package with Virgin Media, but they have given subscribers access to additional channels such as Discovery and National Geographic for a month free of charge.

I have been recording series from these channels to watch later. When the subscription ends and I drop back down to the basic channels, will these recordings still be accessible?

I ask because once before a series I had recorded disappeared/wouldn’t play because the channel I had recorded it from had been discontinued, or similar. The series was Picnic at Hanging Rock, which I think I had recorded from BBC Two Scotland. This channel was then removed from Virgin Media (at least in England) and replaced with the new BBC Scotland channel. (EDIT: was possibly BBC2 HD)

Is this the same situation, or not? Will I be able to watch recordings from a channel that still exists, but I don’t subscribe to?
Last edited by Si-Co on 28 April 2020 2:41am - 4 times in total
CEEFAX SUBTITLES BEGIN SHORTLY
NG
noggin Founding member 26 April 2020 8:26am
Normally PVR recordings remain encrypted, in the same way as they are broadcast, on your drive.

In most cases you therefore need to have an active subscription for that channel at the point of playback (in exactly the same way as if you were watching the channel live at the time you are replaying), not just the point of recording, to decrypt and replay the content.

Whether a channel still needs to be 'current' for this to happen will depend on the decryption platform I suspect.

You mention BBC Two Scotland vs BBC Scotland. It makes me wonder what has happened to all the BBC One HD / BBC One Scotland SD recordings on my box, given we have neither channel anymore. Unless they're hidden away up in the 800s :/
ELM 2011: I am sick of been persicuted by you immature TV Forumers! 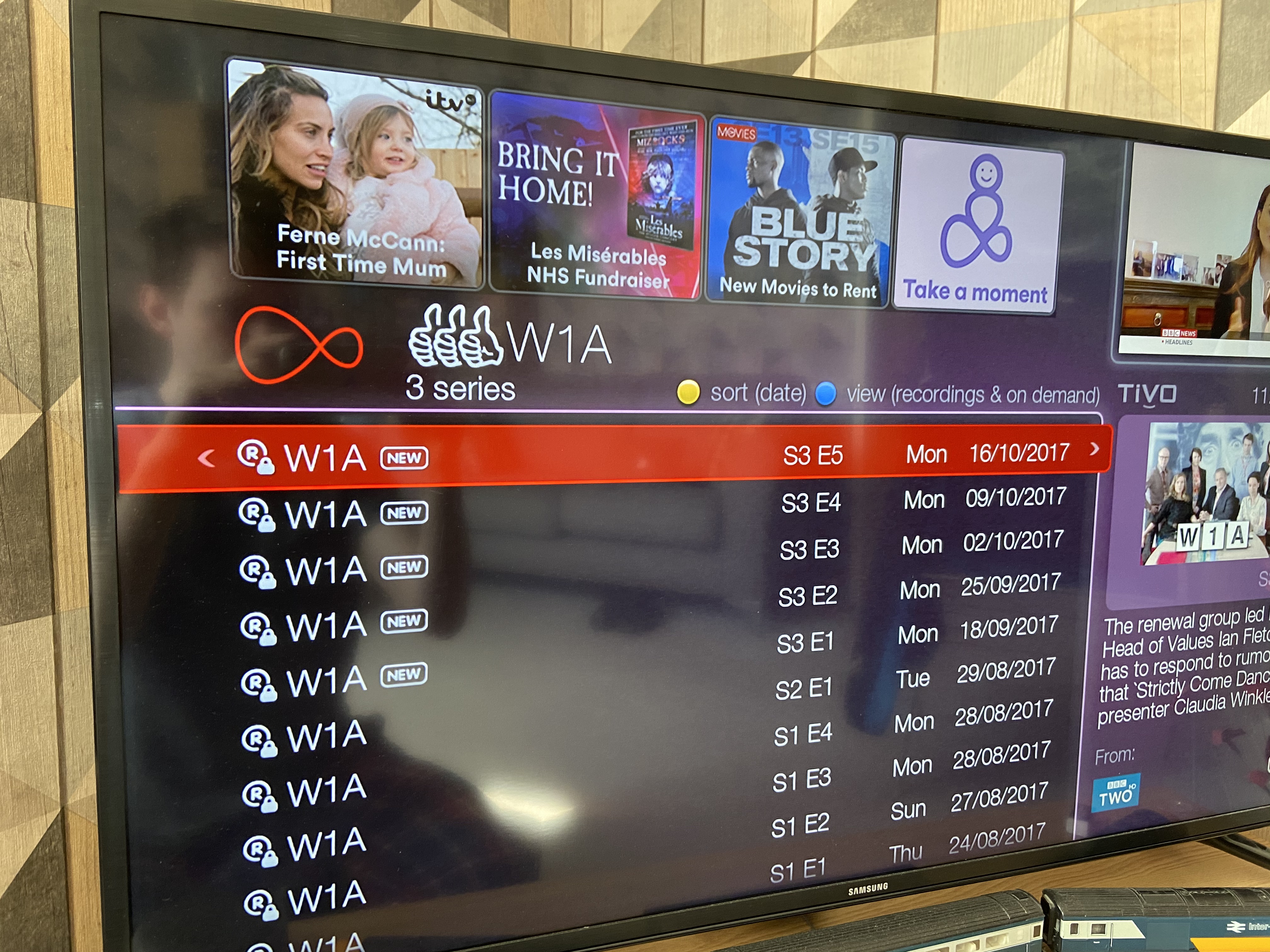 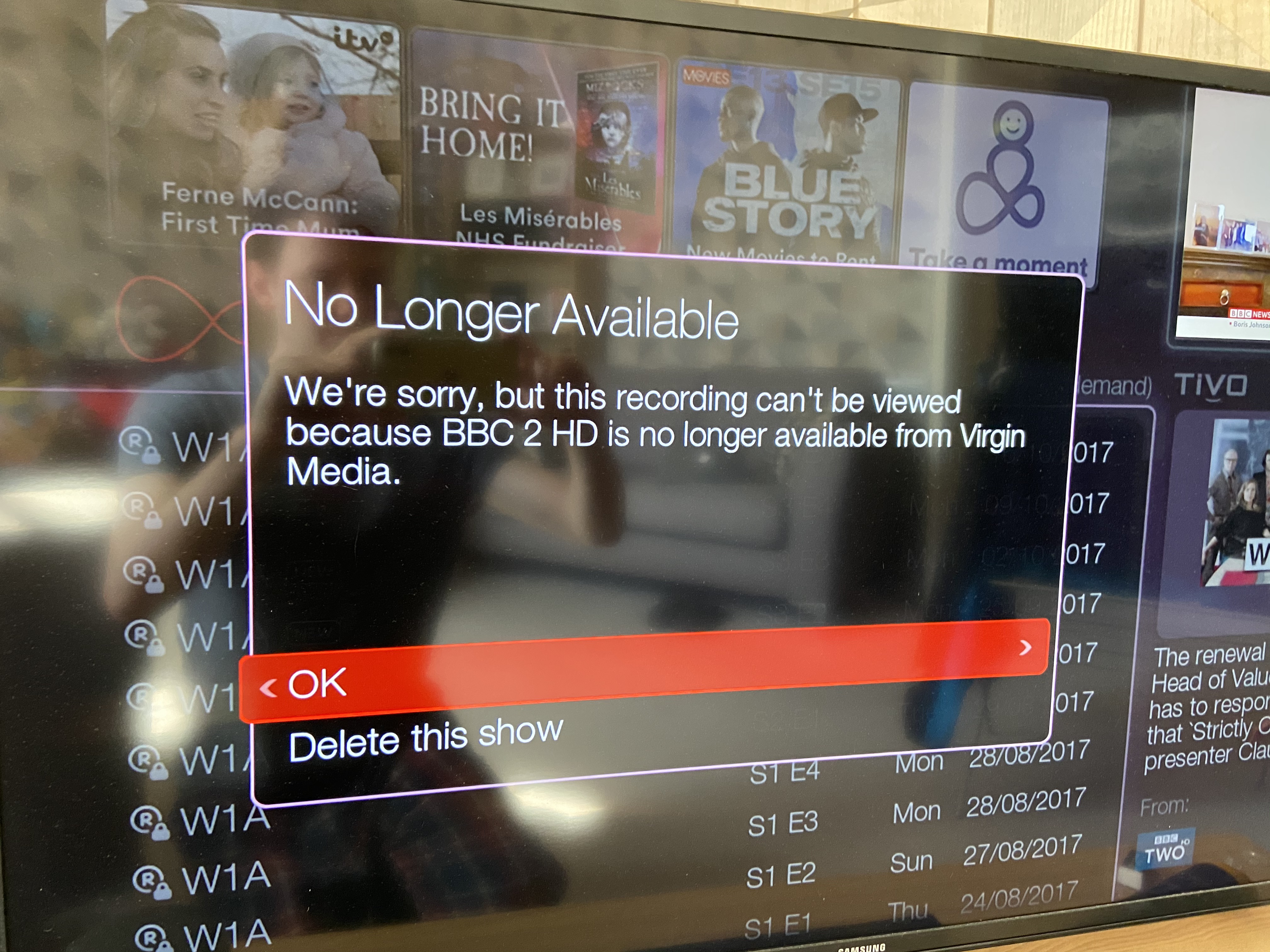 ELM 2011: I am sick of been persicuted by you immature TV Forumers!

VMPhil Granada North West Today 26 April 2020 11:51am
Yeah, it's unfortunately not a good idea to use them as archive machines, though if it's any consolation it appears W1A is available on iPlayer for the next month?

Had the same thing with the live Inside No 9 and trying to play it the other week gave the same message. Crazy considering BBC Two HD exists on 102. I guess whatever actual ID it used under the hood to identify the channel wasn't transferred to 102 when the changes happened.


When BBC Three disappeared they gave viewers 12 months to watch any recorded programmes.

So yeah, the Virgin box is a rubbish long term archive option.

james-2001 Central (East) East Midlands Today 26 April 2020 2:09pm
I don't think Sky boxes are any different either when it comes to playing back recordings from unsubscribed or defunct channels.

Orry Verducci Anglia (West) Look East (West sub-opt) 26 April 2020 2:20pm
james-2001 posted:
I don't think Sky boxes are any different either when it comes to playing back recordings from unsubscribed or defunct channels.

My experience with Sky+/Sky Q is that recordings from defunct channels do continue to play, so in that respect Sky's system does seem to work better than Virgin's.


However like Virgin all recordings from encrypted channels do require you to have a current subscription to the right package.


Yes - that may be a function of either different encryption schemes (Sky uses Videoguard, Virgin uses something else) or the way the OS/firmware/application running on the two platforms handles playback of recordings.

Orry Verducci Anglia (West) Look East (West sub-opt) 26 April 2020 10:42pm
noggin posted:
Yes - that may be a function of either different encryption schemes (Sky uses Videoguard, Virgin uses something else) or the way the OS/firmware/application running on the two platforms handles playback of recordings.

My understanding of Sky's platform is that it's a combination of how Sky have setup their VideoGuard encryption, and how they manage accounts and set-up viewing cards.


When an encrypted channel is recorded to a Sky+ or Sky Q box, it is recorded exactly as broadcast, complete with encryption and all the data that goes with it. Therefore as long as you have a viewing card that understands the version of VideoGuard used, and has an entitlement to the package the channel's encryption data says it belongs to, the box can decrypt the recording exactly as it would if you were watching the channel live.

When packages change, it appears Sky keep the legacy packages active on each customers account provided they still subscribe to a current equivalent package. As such the viewing card retains the entitlements for the legacy packages, and can continue to play old recordings made from channels belonging to the old packages. In addition new viewing cards seem to be fully backwards compatible with old versions of VideoGuard, as may be found on old recordings (if you have a box old enough).

I imagine Virgin's boxes records channels in a similar way to Sky's, but clearly their firmware/viewing cards don't retain the entitlements to play recordings from defunct channels in the same way Sky's does.