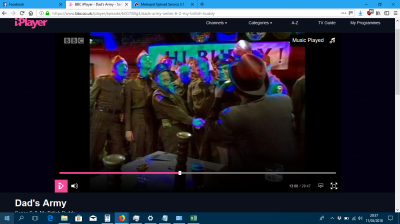 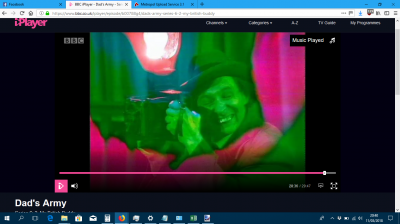 Think this may be related to this thread but basically the context in the episode is a photo's just been taken in both shots, the first one from behind Cheeseman (the photographer, he later effectively replaced James Beck for a series the following year). The second shot is directly looking at the white light and physics tells us white light is full intensity RGB which presumably tube cameras didn't like and it amplifies the "sticky" effect in the linked thread? But from the first shot the white light on the camera isn't visible to the (recording) camera so presumably it's picking up reflections off the back of the set?

The below shot is from the infamous "don't tell him Pike!" episode, aired a couple of weeks ago, again click for bigger:

the above works better as a visual clip, see from 19 minutes here:
https://www.bbc.co.uk/iplayer/episode/b0078827/dads-army-series-6-1-the-deadly-attachment
You can see distortion on the picture when Corporal Jones is firing the Lewis gun on the stage, though it varies in intensity between the two camera shots, the wider shot seems less "affected". I'm sure I read elsewhere a similar effect happens in Dr Who sometimes and again I think it was down to the cameras used or something to do with air vibration?
DA
davidhorman 11 March 2018 11:01pm
I'm sure there's something about this written up somewhere on the Doctor Who Restoration Team site, but I can't for the life of me remember which episode it was. Definitely something with a lot of gunfire, which caused stripes to pop up on the video.

Fans of tube cameras would enjoy Inside No. 9's Christmas special from last year, which was shot on them as the story was ostensibly the output from a 1980s studio session.
Last edited by davidhorman on 11 March 2018 11:06pm
JA
james-2001 11 March 2018 11:59pm
That inside Number 9 special helps show why you really do need to genuinely use tubed cameras to get something to really look like something from that era. You just can't recreate those artifacts easily, even in post production. Even using modern cameras set to 4:3 and SD and adding some post-production effects really doesn't cut it- the second series of Look Around You looks too crisp for something from the 80s for example!
NG
noggin Founding member 12 March 2018 9:20am
davidhorman posted:
I'm sure there's something about this written up somewhere on the Doctor Who Restoration Team site, but I can't for the life of me remember which episode it was. Definitely something with a lot of gunfire, which caused stripes to pop up on the video.


That was almost certainly "microphony" - where sound was so loud it physically caused the tubes to rattle and the scans to disrupt and you got. You see it a lot on tubed music concerts where they are near PA speakers (Live Aid is covered in it)
NG
noggin Founding member 12 March 2018 9:34am
Neil Jones posted:

The flash bulb will have absolutely saturated the Red, Green and Blue tubes with charge, and it may have taken longer than 1/50th of a second (field duration) for that to dissipate, but it will have done it differently for each tube (they had different chemical make-ups) and as a result you end up with different colour casts across the picture as the tubes recover.

Previous Next
This was first archived on 8 September 2018