Hello! It’s lovely to meet you all. It’s a good thing we’re good at queuing patiently in the UK! It’s now only a few weeks until #DisneyPlus launches *cue the confetti, tears of joy and fireworks* Follow @DisneyPlusUK for the latest #DisneyPlus updates. pic.twitter.com/B4Ni3sw85H 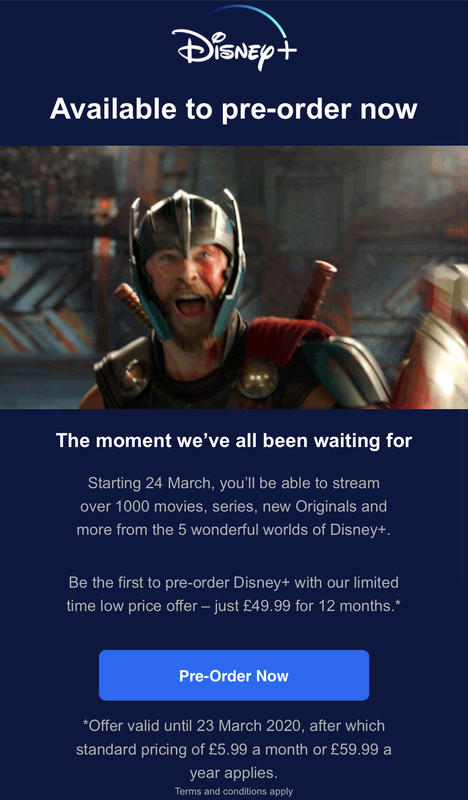 DVB Cornwall West Country (West) Spotlight 24 February 2020 9:43am
So it's been announced, not quite as generous as some of the rumours. Still £4.17 per month is worth it imo.

DVB Cornwall West Country (West) Spotlight 24 February 2020 3:33pm
Interesting that other streamers are set to offer deals to try and short circuit Disney+ Starzplay being the first to go public with a 99p per m/3 month offer launched today.
SE
Square Eyes Founding member 24 February 2020 7:09pm
It would be helpful to know exactly what is going to be on this service ahead of inviting people to pre-pay.

Where does Disney + fit in the release window? Presumably Sky maintain first run pay rights on movies, but with Disney + ahead of any terrestrial premieres?
NJ
Neil Jones Founding member Central (West) Midlands Today 24 February 2020 7:14pm
DVB Cornwall posted:
Interesting that other streamers are set to offer deals to try and short circuit Disney+ Starzplay being the first to go public with a 99p per m/3 month offer launched today.


You can get Amazon prime half price and a few months free if you're a student. Plus you get 30 days free trial for new to Prime.
Netflix used to do 30 day trials but for some reason they've stopped doing that. They might come back. Offers on Netflix are rarer than rocking horse poo so take it or leave it.
NowTV I believe is initial trial and full of offers from here there and everywhere, its almost impossible not to be on a deal of some sort. Anybody on Now TV who isn't on a deal isn't trying hard enough. Sky (TV) deals are on all the time but you're committed for 18 months and compared to a lot of other services isn't particularly cheap in the first place.

DVB Cornwall West Country (West) Spotlight 24 February 2020 8:24pm
Agreed, but the Starz one is clearly on the back of Disney's forthcoming launch and not a 'normal' offer. Hardly a spoiler but poking a stick at both the newcoming streamer and potential subscribers whose awareness of Starz may be limited or zero currently.

That offer was available before today, and I'd suggest they are aiming for a different audience than Disney+.

London Lite Founding member London London 24 February 2020 9:06pm
I've had numerous 99p Amazon Channels promotions and this was before Disney+ and Britbox came on the scene.
NJ
Neil Jones Founding member Central (West) Midlands Today 24 February 2020 9:07pm
It will be interesting to see what happens, considering Disney+ undercuts both Amazon @ £79.99 a year and Netflix @ £71.88 a year.

Any news on what was happening with Sky Cinema Disney now Disney+ has come along, or is the current deal with Sky got a while to go yet?
JO
Jonwo (previously Jonwo87) 24 February 2020 9:14pm
Amazon probably won't undercut as the £79 a year including other stuff like music and one day delivery.