Markymark posted:
tightrope78 posted:
Stranger things do happen. Well known reporters have left the BBC and other broadcasters before for seemingly thankless PR type jobs. Martin Sixsmith worked for the Blair government whilst Michael Cole and Laurie Mayer both worked for Mohamed Fayed.


Robert Nesbit, formally Sky and BBC News, now PR for the Rail Operators Association. As I said up thread there's an overlap between journalism, politics, and PR


Yes. I work in comms and marketing as my main job and then have radio as a sideline (the latter was originally going to be my career - well, that or joining the Police). The two very much overlap. I certainly wouldn't be able to do one job without the experience or skillset of the other.

In hindsight I made the right decision as to which to make a career out of, even though I have a qualification in radio. In fact most people who I know in the comms sector these days I knew from my radio work years back and have joined the industry in the last few years.

I have seen the new BBC channel graphics and they are really really good. When I went back to watching the actual BBC News channel the current graphics just makes it look clunky and outdated by comparison.

Honestly they’re so good. Particularly the breaking strap, and the big bold headlines. I love it! Ties in much better with digital video too.

Literally when someone told me they were in the system to view I stopped what I was doing to find them and look. We’re clearly the same.

It's July, so clear your diaries, get the time booked off, cause that's what I'm doing. 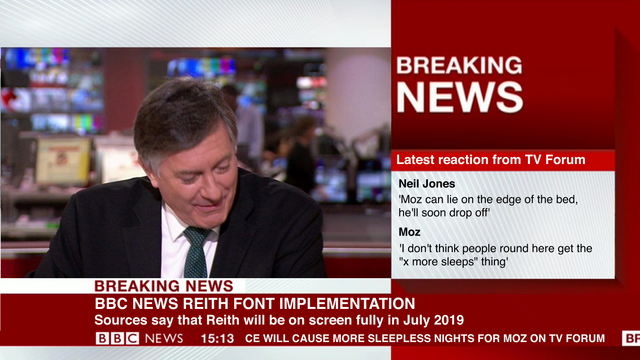