Moz 26 May 2019 11:49pm
ALV posted:
Election coverage on BBC World News - with Ros Atkins leading coverage instead of Huw Edwards, which he is featured in the EPG and the continuity ident. The ticker is a little bit weird... 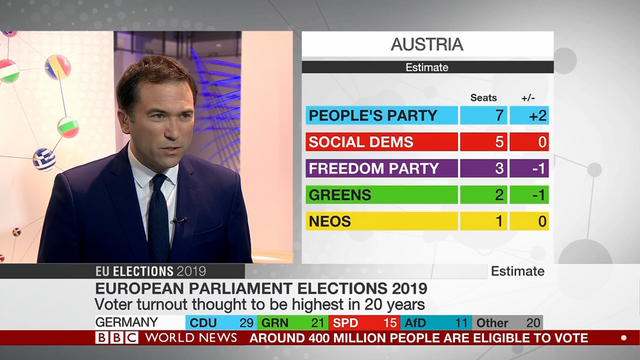 What typeface is EU ELECTIONS 2019 in?
All by Moz

Newsroom posted:
Moz posted:
Newsroom posted:
Why is the ten late again for some rubbish tv that’s not worthy of prime time? If it were anything special then fair enough.


‘News at When’ has its home on another channel, not on the BBC, and certainly not to the detriment of having to shunt Newsmight to almost 11pm.

Also, the Ten and Newsnight are BAFTA winning TV programmes.


I agree with everything you say in that post, which doesn’t in any way deal with what I said about Talking Heads.

I know I’ve criticised the BBC’s studio but I thought the coverage was very good. Huw Edwards was just excellent - his depth of knowledge shone through and I never saw anything phase him, such as lines going down etc.

One triumph was when Andrew Neil was interviewing Alastair Campbell and he spotted the head of Momentum, Jon Lansman, entering the studio to chat to Huw. For a moment it was ‘oh no, they want to debate but they can’t because he’s over with Huw’ - but Huw took charge, put some of Campbell’s points to Lansman, and the director put them in split screen which allowed the debate we all wanted to happen.

As for the news summaries getting in the way of counts, to be honest once we’d seen the first few “Labour since 1923” seats go Tory with a swing of 10%, we’d seen them all. Unless you actually lived in the constituency concerned, so long as they put another seat on the Tory count it’s job done.

I think it was right they concentrated on the overall story with expert commentary rather than endless “I, the deputy returning officer for...” blurb!