Also, 2020 marks the last year of Brendan's contract with the BBC to provide annual Christmas specials of the now boring and milked dry show.


Fixed the above for you.

Pre-scripting corpsing/line fluffs is pretty common, usually it starts with something in rehearsal (or in live shows an early performance) and it’s deemed as so funny it’s worked into the main script. The Bottom live shows did it with Rik Mayall and Adrian Edmondson, which were released on video making it apparent for everyone who’d attended that it wasn’t quite as improvised as it seemed on the night, and in a limited way it happened with the 2014 Monty Python reunion, although the latter had a hidden reason as Terry Jones was struggling to remember his lines so needed the scripts on set, and as that looked a bit concerning on its own they thought up a scene where John Cleese would also pretend to forget the lines and snatch the script off him each night.

The end of ITV regional Teletext

mb21's excellent Teletext Museum has a page dedicated to ITV ancillary services. From what I remember, many of the images and text started out on Darren Meldrum's MHP page back in 1996-97, later transferring to mb21 at the end of that decade.

(I was having some trouble with mb21's website recently - it would load about two or three pages at a time and then the entire site would go down, but if the links don't work it's all on Web Archive)

Some pages were updated around 1999, but most of the images and information remain over two decades old, except for the Carlton page which has some images from January 2002 - these were actually contributed to the site by myself after getting a TV capture card the previous Christmas! But what's still missing is the end of the service, which quietly finished at the end of 2004 in a very sorry, outdated state.

I captured the closing days of the Carlton/LWT service at the time, and think I sent the images over but the site never got updated. As far as I'm aware they haven't appeared since elsewhere, so for those interested, here they are.

...except in the (by now very outdated) information about PDC, hidden from the front menu and where Carlton stubbornly clings on. (2-page GIF)

If you switched on before 9:30, you got GMTV Text instead, the December 2004 front page looking fairly similar to mb21's captures from November 1999, but with different pages.

After 9:30 on a Friday and all weekend, you got an ITV1 LWT front page, with a completely different graphical design to the former Carlton page:

From what I remember, in January 2002 these pages looked identical to the "LWT PLUS" ones on mb21's site from December 1996, so I didn't bother capturing them at the time.

This I wasn't expecting to find - information about ITV's 'Year of Promise' which by then was half a decade out of date! All three subpages here:

A few test pages which someone better technically minded than me will understand:

And just for the hell of it, here's Ceefax and Teletext's front pages from Christmas Day 2004, plus an extra BBC festive greeting. 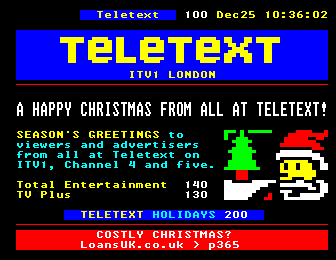 New Years Day 2005 and the regional pages are finally removed, showing this on page 600 instead. From memory this page could still be accessed for a good while, although by the end of the entire service in 2009 it was no longer available.

Hope that was interesting and/or nostalgic to some anyway!