This site closed in March 2021 and is now a read-only archive
Previous Next
PR
presenterterry 16 July 2015 2:04am
Calling all Doctor Who fans!

The new series (season 9) staring Peter Capaldi as The Doctor and Jenna Coleman as Clara Oswald returns to British screens from Saturday, 19th of September 2015 on BBC One and BBC One HD.

What are you expectations for the new series?

Having watched the promotional trailer a couple of times, I noticed that 'the round things' are back, and for good it would seem, as the TARDIS has been given a bit of an update.

Daleks... Every Doctor (whether it be on screen or in the audio books) has at some point faced them, and it would seem they are back for this series. In the background of this promotional trailer, I've noticed you can just about make out what appears to be a 'classic' Dalek. To me, this indicates 2 things - Could we see another Asylum of the Daleks type episode, where we see multiple generations of Daleks? Perhaps the Davros rumors are true... Are we going to travel back into Davros' timeline? Are the Daleks going to return to Skaro and find some old casings there, which could lead to a very interesting storyline.

The Master - Well, okay 'Missy', we already knew was returning for this series. Is Missy there to help or hinder The Doctor this time though? Having seen clips from filming and snippets of teasers, it would appear that she is trying to warn The Doctor about something!

Oh and why is Clara wearing The Doctor's spacesuit. It appears to be the very same that 10, 11 and 12 have worn.

Might we see the return of The Doctor's granddaughter Susan?

Look forward to seeing your comments, thoughts and suggestions.

PR
presenterterry 5 September 2015 10:25am
Well, look what turned up through the post this morning... Doctor Who: The Complete History - Issue 1 (Hachette Partworks Ltd) 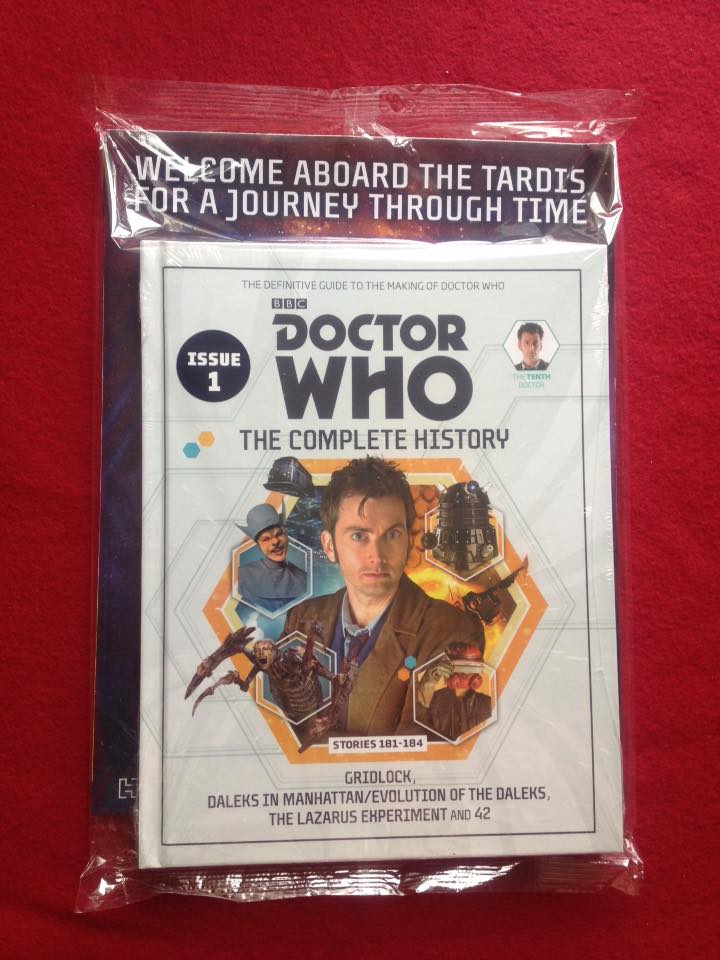 BA
Bail Moderator 5 September 2015 11:23am
presenterterry posted:
In the background of this promotional trailer, I've noticed you can just about make out what appears to be a 'classic' Dalek. To me, this indicates 2 things - Could we see another Asylum of the Daleks type episode, where we see multiple generations of Daleks? Perhaps the Davros rumors are true... Are we going to travel back into Davros' timeline? Are the Daleks going to return to Skaro and find some old casings there, which could lead to a very interesting storyline.

I've no idea if Davros will feature, but I'm 99% sure that we have a Skaro based episode...

This city shown during both trailers (featuring "things" rising up which IMO are Daleks) shows a very similar appearance to the cites on Skaro of old who.

Then inside we have a lovely selection of Daleks, New Series, Some Old Blue and Silvers, The Dalek Controller and a Special Weapons Dalek. However I can't spot any Paradigm Daleks, what to read into this I don't know, but it feels like these "classic" daleks on their original home-world may not know about (or be set in time before) the paradigm Daleks, could make for a nice Dalek v Dalek episode on their "purity".

Interestingly these two shots come from the first and second trailer, the TARDIS clearly hasn't arrived during the first one and appears to have some sort of turret/gun pointed at it in the second. It's also of note that in the trailer Missy is with a Dalek so she is presumably part of this episode story in some way.

Finally my fave geeky point of note is the doors are identical to Skaro of old
BA
Bail Moderator 5 September 2015 11:27am
The magicians apprentice trailer from this morning


As P.Cobbold Esq. has mentioned, up until the last two serials of Series 3, each episode had an individual title, rather than "Monster Of The Week - Episode 1" format we were used to for the rest.

The first serial has been given several names - 100,000BC, An Unearthly Child, The Tribe of Gum, The Stone Age etc... 100,000BC was used at the time, so many people think that's the most accurate title.

As for the second serial, that is nowadays known as "The Daleks" but only since 1980. When, as you say, a serial emerged with "The Mutants" as its title, from 1972 onwards the original serial was known as "The Dead Planet." But from 1963 to 1972, it was called "The Mutants".
JA
JAS84 6 September 2015 1:33am
Well, whatever the story behind it is, the fact is that the name The Mutants is a duplicate and should not be used nowadays to refer to the Hartnell serial, since the Pertwee one has no other name. Instead of using a disambiguator, they should have straight up called the serial The Daleks.
JJ
Juicy Joe Founding member 6 September 2015 6:26pm
I expect the theme tune to be remixed or at least some more bass injected into the tune - some people last year complained that there was underlying bass and that it had very little umphh compared with the previous themes. I think overall, I liked the screechy nature of the music but with extra welly, it would be ace. It would be nice to see those lightning strikes back again in the titles from Matt Smith's era also.
DA
davidhorman 6 September 2015 6:40pm
I don't like the wobbly waily bit, but other than that the title music is okay. What I really don't like is how it goes from the from cold open mixed in 5.1, to the titles mixed in plain old stereo.
Last edited by davidhorman on 6 September 2015 6:47pm