This site closed in March 2021 and is now a read-only archive
Previous Next
SM
smw 1 May 2015 8:09pm
all new Phil posted:
I really like her. I think the show would be better if it was just branded as BBC News but made the use of guests and the studio setup that they use for it. It would take it back to the original intention of a 5 Live type format that I've *always* thought would work.


I agree. I think the problem with the programme is that it's only a single programme which is branded differently so it feels like the show itself is breaking stories and covering breaking news when it should be BBC News doing it. The BBC are right to try and make the news rather than just follow but limiting that to just one News Channel programme I think is a mistake and they should widen it out more.

Personally I think the News Channel should be more dynamic and not just rely on covering news conferences and forever covering the same stories which limited (new) information. It should be making news and its success should be measured on impact and not just on ratings.

It'll be interesting to see how it develops over the next few months and whether we see further changes. I think when it started it as envisaged that the 1/6/10 would become less important as people got the news when they wanted but that doesn't seem to be the case plus the increase of news online and via social media means the role of a news channel needs to review what it does and I think this programme is an interesting starting point.
BR
Brekkie 1 May 2015 8:45pm
Yes, if anything the traditional bulletins are still as important as they were 10-15 years ago while it's the 24/7 news channels which are struggling more to compete in this new connected society. As noggin said earlier TV is so much more resource heavy which lends itself much more to the traditional bulletins rather than breaking news as it happens.
MD
MDQ1 1 May 2015 11:30pm
Joanna Gosling was very good at presenting, makes me wonder why it's so Victoria-centred and not more like the way the News at 10 is predominantly Huw Edward's.

On another note though, I don't think the show would work with a man presenting - i.e Simon McCoy or Gavin Grey etc
LL
London Lite Founding member 1 May 2015 11:43pm
Is the Victoria Derbyshire branding really required? All it needs is a WN style generic name for the segment.
CR
Critique 1 May 2015 11:49pm
I think progress is generally being made but there's still work to be done. They've shortened the end credits*, and seemingly also the 10am titles, and not once did Joanna Gosling (who was quite good) make reference to 'lovely films'. However, they credited the Assistant Political Editor as a 'Political Guru' on the strap, which seems a bit weird, and today's programme also dedicated the first 30 minutes to a debate about last night's Question Time special, which I think is one of the longest debates they've done (aside from the debate programmes), and for a rolling news channel it does seem slightly odd. There was a lot of news that could have been covered in that time, but instead we got 30 minutes of what some members of the public thought about last night, which isn't news.

They did at least manage to get a bit closer to hitting the TOTH for the headlines - if it starts at precisely 9:15 then they were only 30 seconds or so out looking at iPlayer, although the rest of the week they continued to be a few minutes late.

*They've shortened the credits but they don't seem to have the flexibility to run longer credits if they're underrunning. On today's programme everything was wrapped up a minute before they were due to go off air so there was a solid 40-50 seconds of ad-libbing about 'getting in touch with Victoria on Twitter'.
HA
harshy Founding member 4 May 2015 12:42pm
Here's a closeup off that V logo that looks like Surf Deodorant , I found this on a Globecast feed presumably for the team in Sheffield to feed it into their flat screens. 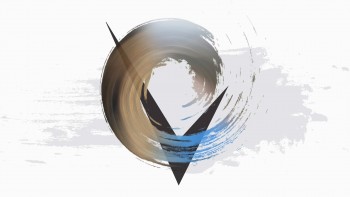 
Remember there are LOTS of restrictions for broadcasters while the polls are open, hence normally the only mention on the news channels are "Millions of Brits are voting".
LL
London Lite Founding member 6 May 2015 6:31pm
HarryBNF posted:
Victoria said at the end of todays program, that tomorrows show will be a "politics free zone". Highly doubt that.

After six weeks of Election coverage, it's always a bit surreal when the bulletins go back to the banal until 10pm.