This site closed in March 2021 and is now a read-only archive
Previous Next
KE
kernow 14 April 2015 6:12pm
BBC 2 wales showed the BBC 1 Neon (Blackpool) ident before Are You Being Served today (without any reference to the mistake by the continuity announcer)!
JO
Jonny 14 April 2015 11:06pm
There was a live (or at least produced tonight) trail for Later Live during the 9pm junction, which highlighted something to me - back in 1997, a simple few lines of text would have been overlaid onto the closing seconds of the trailer. In 2015, we got a crash cut away from Jools and a nice piece of live music to a silent (bar a pre-recorded v/o) hot pink endboard, jarringly disrupting the flow of the trail and the junction.

It just looked so bad. Will 99% of viewers notice or care? Nope. But even so, it's undeniable that something from almost 20 years ago would have worked considerably better.

PF
PFML84 15 April 2015 12:16am
I'm surprised Sure deodorants haven't sued the BBC for basically using their logo reversed for Victoria's logo!
DP
D.Page 15 April 2015 9:16am
Stormont Today on NI was extended last night, such that they were unable to show QI - and, leading into the News, there was time for a full 30" playout of Diary

JA
JAS84 15 April 2015 9:24am
kernow posted:
BBC 2 wales showed the BBC 1 Neon (Blackpool) ident before Are You Being Served today (without any reference to the mistake by the continuity announcer)! 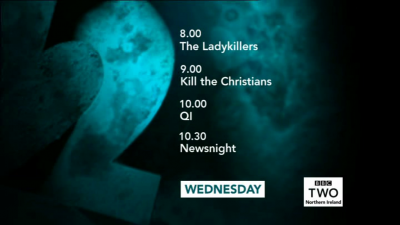