This site closed in March 2021 and is now a read-only archive
Previous Next
SC
scottishtv Founding member 23 December 2013 8:59am
VMPhil posted:
gottago posted:

Likewise, I can imagine that people are avoiding Glenn Murphy down the pub.
BH
BillyH Founding member 23 December 2013 10:09am
Amusingly ITV Regional Teletext - or at least London's - continued to have information about the Year of Promise until the pages were switched off at the end of 2004.
MA
madmusician 23 December 2013 4:44pm
I remember that a primary school teacher of mine used to show us Cool Runnings (an end-of-term favourite for us in those days, c.2001) taped from that transmission. I always wondered what those break bumpers were about. He'd stopped the recording for the ads and the in-vision bits that were mentioned upthread (apart from one bit, ISTR) but the break bumpers remained.

Glad to finally know what it all referred to. How funny!
JO
Jonny 23 December 2013 4:48pm
gottago posted:
I've been keeping this leaflet for years waiting for an appropriate thread

Because demand was so highly anticipated.
AN
Andrew Founding member 23 December 2013 5:14pm
I don't think the Promise Sites ever did appear, I remember reading an article about how they were abandoned due to lack of interest.

The trailer end boards were used from the start of that year until a bit after the Day of Promise I believe.

BBC Music Live was at the heart of the 'BBC getting too big for its itself' era which was reined in years to come, and has now been reined in too far.
GE
thegeek Founding member 23 December 2013 5:22pm
yes! I found the one in East India Docks Basin in 2011 - it's just across the river from the Millennium Dome. (I've not been back since, so couldn't tell you if it's still there - or whether the nearby British Gas Millennium Beacon still stands.) 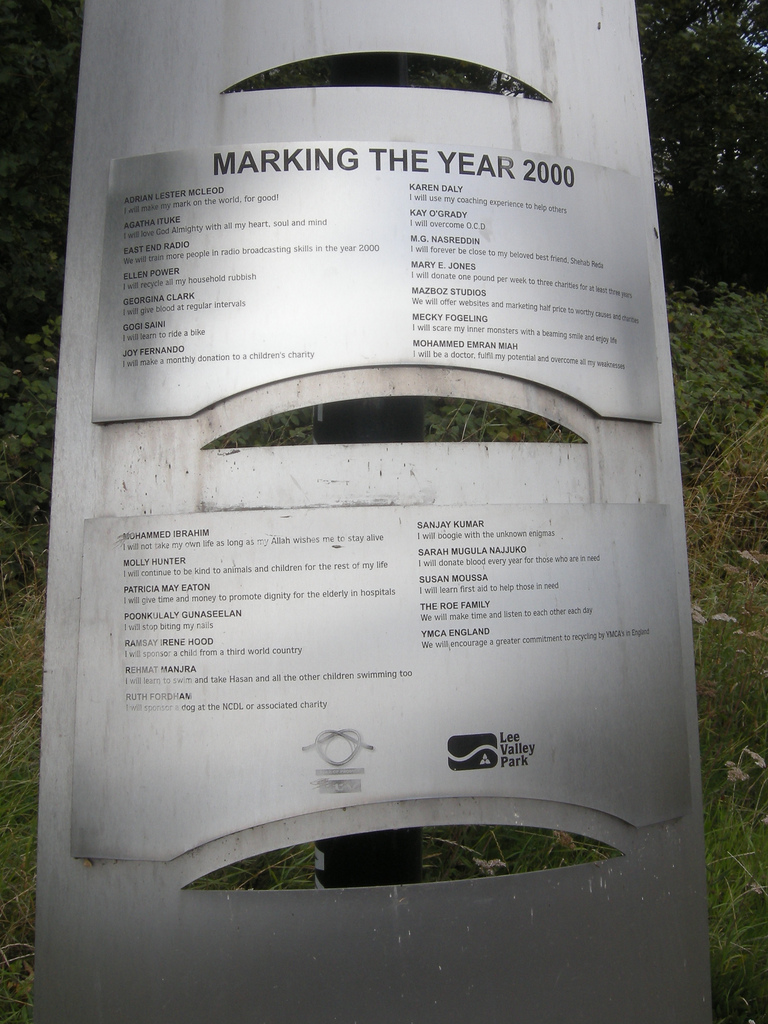 I bet a few of them still exist, lord knows in what form.

According to that archived site the register was sent to the national libraries of Scotland, Wales and NI as well as the British Library. A quick look on each of their catalogues and I can only find one in the Scottish library, they've also got a CD ROM with the register on and info on the event:

The publisher is listed as Carlton Television, somehow it doesn't surprise me that this dreadful event was their idea! Were LWT not responsible for bank holidays?
GO
gottago 23 December 2013 5:29pm
Gosh good find thegeek! Cementing "I will boogie with the unknown enigmas" in history is well worth anyone's £25.

I wonder if Mohammed Ibrahim has committed suicide yet? Was there no quality threshold for these promises or was Carlton that desperate for the cash?!
VM
VMPhil 23 December 2013 5:43pm
The more that is posted here about this event, the worse it gets! I can't believe the ITV of 2000 would do something like this, seems like something they'd get up to in the 80s or 90s.
VM
VMPhil 23 December 2013 5:51pm
Also it seems that promotions for programmes on the day itself had yet another endboard style. This first one features the Anglia logo:

:-(
A former member 23 December 2013 7:13pm
A number of places in the STV are has closed down!
RD
RDJ 23 December 2013 7:28pm
I've found youtube evidence of the CITV coverage from the day. Interesting to see that Eamonn and Carol hosted this part of the coverage too... complete with cardboard cartoon cutouts in the studio. And indeed Stephen and Danielle did decamp down to London for the day as mentioned earlier.

If adults struggled to understand this day then god knows what the kids were thinking this day was all about too.