This site closed in March 2021 and is now a read-only archive
Previous Next
:-(
A former member 22 December 2013 9:30pm
It seems the second white broads are part of "ITV Year Of Promise Styled Promo" Can anyone remember that?

September 2000
http://www.tv-live.org.uk/wp/media/itv1/1999/itv9920.jpg
VM
VMPhil 22 December 2013 11:07pm
I'm pretty sure they had a Day of Promise or something like that with trailers leading up to the event, although I can't remember what it was actually about. CiTV debunked to London for it, that's as far as I can remember. Let me have a quick google...

So those promos were used from Jan -April 2000, while the first black version was used from September 1999 = September 2000, an appeared at the same time.
JO
Jonny 22 December 2013 11:23pm
I have no recollection of this but the website is archived so it was definitely a (strange, strange) thing:

https://web.archive.org/web/20001121113700/http://www.itv.yearofpromise.co.uk/promise/make/about_regions.htm
VM
VMPhil 22 December 2013 11:32pm
I can't find anything of what happened to those 'Promise Sites' or if those inscriptions still exist.

It's a bizarre thing really - if making a promise was free, was the £25 inscription the only thing that ITV got out of it? How many people did they expect to do that then?
RD
RDJ 22 December 2013 11:39pm
This youtube clip is the start of the Year of Promise telethon... sorry... promise-a-thon.

I think this was a last minute thing ITV came up with to compete with the equally unmemorable BBC Music Live event the BBC held a few weeks before on May Bank Holiday of which I have other similar vague memories of.
:-(
A former member 22 December 2013 11:43pm
I remember this now, Emmon holes come live from that studio in-between ad break for James bond,

Don't mention that stupid BBC music thing, it happened on the late May Holiday BBC adminted and went live to people works in Scotland saying oh well people up here don't actually have the day off but lucky some can still enjoy the misc while there work.
Last edited by A former member on 23 December 2013 12:05am
GO
gottago 23 December 2013 12:06am
I've been keeping this leaflet for years waiting for an appropriate thread! 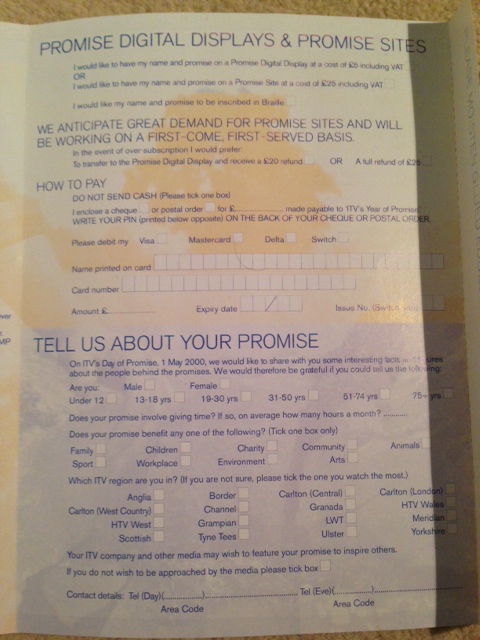 Also I'd forgotten how dated that Iceland logo looked by then.
GO
gottago 23 December 2013 12:34am
Jonny posted:
I have no recollection of this but the website is archived so it was definitely a (strange, strange) thing:

Alan Halsall (Tyrone in Corrie): I will keep my car tidy
Damon Hill: I will spend less time going round and round in circles
Louis Emerick (Brookside): I will not use the F word at Liverpool football matches
Westlife: We will pick up at least one piece of litter every day
Melanie Stace: I will shower with a friend to save water
Glenn Murphy - London's Burning: I will talk about the benefit of smoke alarms with everyone I meet
B*witched: We will put our spare change into envelopes provided on planes for charity
VM
VMPhil 23 December 2013 12:36am
gottago posted: