This site closed in March 2021 and is now a read-only archive
Previous Next
VM
VMPhil 28 September 2013 4:50pm
Charlie Wells posted:
Well it was only a matter of time before Daily Mail wrote an article about what could be seen in the background...
http://www.dailymail.co.uk/news/article-2433055/BBC-News-workers-fighting-umbrellas-picking-nose-presenters-causes-viewers-outrage.html#comments

It's probably also only a matter of time before they stop accepting comments on the article, as the overwhelming majority of comments are either criticising the DM or taking the p*** about the article.


I love how you can clearly see they've just searched for "bbc news background" on Twitter.
EX
excel99 3 October 2013 8:01pm
BBC World News with Zeinab currently being simulcast on the NC covering the security lockdown in Washington
WA
watchingtv 3 October 2013 8:05pm
No one noticed the glitch At One today, during the lottery story they captioned the video launch of the National Lottery as the Health Lottery, then on comes Desmond from 5 in BH who wasn't captioned at all due to the removal of all graphics!
HA
harshy Founding member 3 October 2013 8:08pm
The lower straps are BBC News the location bug and of course the simulcast is BBC World News.
OF
oflahertya 5 October 2013 4:58pm
The N6 former News Channel Studio as from last week. 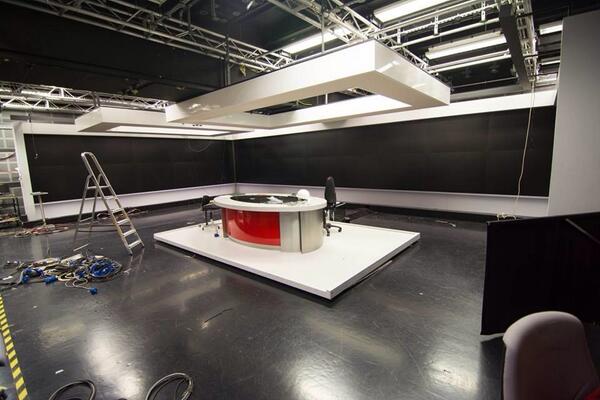 Do I get some Barco cubes as a souvenir.


Planning permission for all three phases was granted in March, May and August 2013 so we could see work starting in the next 12 months

WA
watchingtv 7 October 2013 6:23pm
Ouch, the BBC News at Six just used one of their very nasty BBC One logos to promote tonights Panorama.
AM
amrob2 11 October 2013 1:11pm
A few gremlins in the works on the news channel during the sports bulletin a short while ago.

Half way through a report in the sports bulletin, when Lewis Hamilton was on screen (Incorrectly captioned as Arsene Wenger, Arsenal manager), Studio E was cut back into vision, although the audio from the Salford sports bulletin could still be heard. This lead to a look of shock on the face of Julian when he saw that he and Rachel were being broadcast, Rachel then pointed her finger to the desk (presumably pointing at what was going out on the news channel) and said something, Julian then also points at the desk and they both looked confused. After several seconds of this, the "We apologise for the interruption" caption came up, while still the audio from Salford was playing out. At the end of the sports bulletin, the Salford presenter said "That is all the sport for now, I am handing back I think to London".

The breakdown caption stayed on screen for close to a further minute until they were able to restore the connection properly to Studio E.