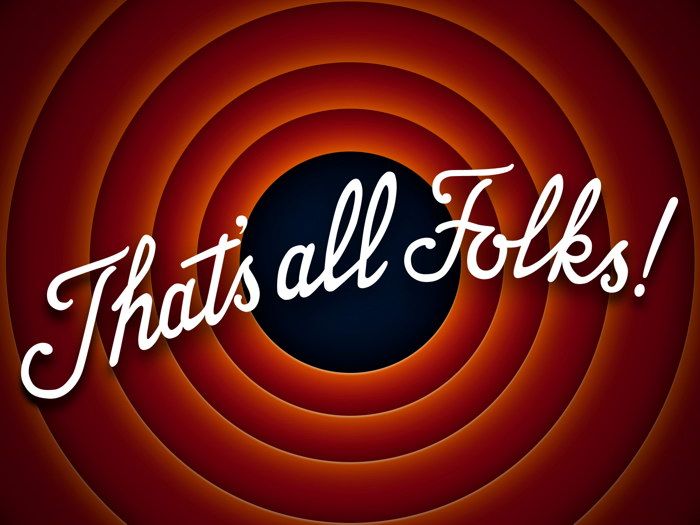 GK
Good2Know 30 March 2021 11:13am
A long-time lurker, occasional poster here, thanking Asa for all of his work over these years, and to many of TVF's members for some enlightening, entertaining and even cringeworthy material that made this site one to visit for any TV enthusiast.

TV Forum will be missed.
CC
CCFG 30 March 2021 11:13am
So closing from midnight tonight or midnight on April 1st?
CW
Charlie Wells Moderator 30 March 2021 11:20am
Well the end of TVF is almost upon us. It's been interesting reading through all the posts in this thread over the past couple of weeks, particularly those who over the years have ended up going into the TV industry. It's also nice to see that over £1700 has been raised for the Teenage Cancer Trust as a thank you to Asa.

Whilst I'll probably be making a couple more posts before these forums close I'll sign this post with a couple vaguely TV presentation related clips.

Just to reiterate – I wish the site wasn't closing. It's meant a lot to me, as I've said, and it's a 'go-to' more than ANY other website (including mainstream social media, which I'd happily do without to be honest). While grateful for Rob's efforts, it's still sad to have to make the move.

Still, 20 years is amazing. Thanks again Asa, the moderators down the line and all the very many wonderful (and not so wonderful!) posters. It's been great.
MA
Martin Founding member 30 March 2021 11:47am
Friday 23rd of March 2001… I had to check my own profile to see when I joined. I remember coming home from school, “logging on” to TV Home and discovering this shiny new “forum”.

I suspect your world, like mine, was very different back then.

Gavin Esler was sitting in on the One O’Clock News and the top story was the epidemic sweeping the country (foot and mouth disease) and Martine Croxall was on UK Today opts (remember those?).

We had people in our BBC One balloon idents… but no sign of dancers yet.

CBBC was still asking for stamped self-addressed envelopes for factsheets.

Blue Peter had a tour of the BBC Weather Centre discussing climate change with Helen Young.

Weekend Watchdog featuring Matt Alright and rows of shiny translucent iMac computers looked at the holidays ruined by the closure of the countryside.


So perhaps some things have changed more than others!

Forgive the indulgence but looking back at what was on telly that day has made me come to realise how much I’ve grown up with this community.

I’ve only just discovered that you can go back and view every post from the very beginning - which is testament to Asa’s commitment to the community given the iterations of Ikonboard, phpBB and custom scripting that the site has went through! My first official post was querying the little red dot next to each person’s username – I hadn’t used a forum before, nor a spellchecker going by some of my early posts.

The UKTV network relaunch of 2001 was probably the first time I felt part of a community – us all eagerly anticipating relaunch morning and posting horrendous quality screencaps from Hauppauge TV cards. Other stand-out moments from the early days include the launch of The World Today on News 24, the BBC One dancers, the mod election (

My brief spell as ‘webmaster’ of Metropol helped me appreciate the work that goes into maintaining a forum community. MP had fairly innocuous debates which paled in significance to some of the bizarre (and in some cases defamatory) discussions that cropped up on here. Running a forum can be like leaving a cat in the same room as your new sofa – you never know what you are going to come back to. So hats off to Asa for steering the ship for twenty solid years.

Like many of the original crew, I don’t post as much these days, but continue lurk. Life has a habit of getting in the way… indeed the most startling revelation that I have just made is that my son is a year shy of being the same age as I was when this place launched.

Here’s to many great memories

Thank you Asa, thank you all.
NL
Ne1L C 30 March 2021 12:01pm
I know I said my previous post would be my last but I have a suggestion although its probably already been mentioned. Let the last post be from Asa. I can't think of a finer ending
RT
rts Founding member 30 March 2021 12:19pm
The end of an era, after nearly 20 years, having joined in October 2001. In a world before MySpace and Facebook, this was my first real online community. More active in the early years and a lurker of late, TV Forum has been the place of great memories, opportunities and some enduring friendships. To Asa and all the mods over the past two decades, thank you!
LL
London Lite Founding member 30 March 2021 12:40pm
While I doubt this will be my last post on TVF between now and tomorrow, I want to express my thoughts on this place closing.

It's a massive shame, but the TV Live Forum is already after a day feeling like home already.

I discovered this forum in 2001 during 9/11 to look for presentation discussion of the attacks where I also discovered DS and signed up that day. But for four months, I was a lurker, reading a mix of informed comment and banter from which I later realised were a group of teenage pres enthusiasts with a few older people.

I remember feeling that I wouldn't sign up as in all honesty I didn't have a clue about presentation. I didn't know my VT from my PSB in those days, but after Christmas that year I signed up and while I still lurked, I'd post a couple of times.

Eventually I started posting more regularly as I understood more and learned so much from insiders on here and was able to debate with fellow enthusiasts.

This forum is more than just that. It fused a group of people with a niche interest together into a community, some of us got jobs in the industry because of those first few posts where we either discussed an ident or even created mocks. The strong moral code we have here has ensured that on the whole, posts are constructive.

Even thought there have been tough times when I've visited here, I've enjoyed being a part of this forum for the last 20 years and I'd like to thank Asa again for providing a forum which has been escapism for me and to each and every forum member who I've had the pleasure of debating or had a laugh with.
SL
Shaun Linden 30 March 2021 4:27pm
That's you lot sorted, I can go now.
WO
Worzel 30 March 2021 4:58pm
Thanks to everyone past and present! Even when we haven't agreed on everything, its always been a fun place to hang out.

"Well, this is it. After twenty glorious years, TV Forum will be coming to an end tomorow."

"It's been a pleasure browsing through these threads for the last, nearly three years as I'm sure a lot of other users had the pleasure of doing the same for nearly twenty years."

"We've had our ups and we've had our downs, but especially right now in the current climate of the world, we've all been together in our own bubble."

"I would like to thank Asa and all of the staff who have literally thrown the kitchen sink, just for this wonderful website to do well, I would also like to thank all of the people that I've spoken to here and I hope we follow each other along to our new home, best of luck to Rob with TV Live Forum."

"And it just leaves me to say that on behalf of myself, this is me, itvblocks...signing off."

"Thank you very much for watching."