Previous Next
BU
buster London London 14 January 2021 2:22pm
I agree, it worked really well for the Comic Relief run and felt more natural - there was no obvious reason to go away to Shepperton for the main show when the rest of it was focussed on the academy. It was quite pokey though...
BU
buster London London 14 January 2021 5:29pm
The thing I remember most about Fame Academy as others have mentioned is the Red Button (or BBCi as it was then) coverage. Freeview had literally just launched so it was the first time I'd had access to this sort of thing on DTT, after they'd tested the waters with the World Cup and The Open over the summer. I can recall coming back from uni one Friday night and retuning my ITV Digital box to pick up all the new channels and the BBCi feed was showing the Shepperton output before the main show went on air, including Patrick Kielty warming up the crowd and making a few comments I'm sure he wouldn't have done if he'd known he was being broadcast. It all felt very futuristic...I then switched over to the ITV News Channel and watched the late London Tonight at home in Merseyside. It was a very exciting time to be a telly geek 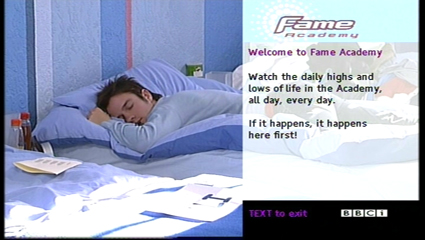 It wasn't all high-octane entertainment!

(from https://deeteetee.blogspot.com/2003/09/bbci-fame-academy.html)
BU
buster London London 15 January 2021 11:34am
That blog is a right old timecapsule, great to look back at the days when the TV remote was more important than your mobile phone.

The past really is a foreign country looking at this one though... 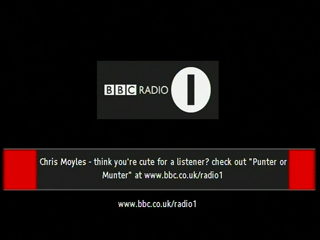 Inspector Sands 15 January 2021 12:16pm
AcerBen posted:
Actually I suspect the reason they didn't bother with the Shepperton studio for Series 2 was because the Comic Relief series had done very well in the ratings, so they probably figured they should make it as much like that as possible.

It was a smaller stage but in some ways it had a better atmosphere.

I haven't seen any of series 1 so can't comment on how it compares but thought it looked quite good on TV, except maybe for the slightly awkward way they sat the judges on the stairs.

In fact I was in the audience for one episode of series 2 and so saw the set up and it really surprised me how it looked on air compared with real life, they squeezed every cm out of that space. There was a lot of repositioning cameras and herding of the small audience into different locations for the links which made it look bigger too

Not the best location for a live Saturday night TV show, Wittenhurst House is in Highgate on the road between Highgate Village and Hampstead Heath (quite near to Swains Lane receive site, but I don't know if that was used, or even if it was still operational at the time) and its a very expensive residential street so the neighbours weren't that happy about it. The agreement to have an audience was that they had to be bussed into the site for the show and bussed back out again and there were time restrictions as to how late the show could go. I assume the crew for the live shows had a similar arrangement.

So the audience, including family members of the contestants*, were told to meet in the car park of Tesco in Neasden (the contestants families were put up at the nearby Holiday Inn at Brent Cross) and then travelled on coaches all the way over to Highgate, and then straight back after the show finished. At the time I lived not that far from Highgate but had to trek all the way round the North Circular only to be driven all the way back!
A bit of a shame as the pubs in Highgate are much better for a post show pint than a retail estate in Neasden!

*wasn't the girlfriend of one of the contestants related to Jenson Button? Think I was on the coach with her on the way there but IIRC he got kicked off so didn't come back with us
MA
madmusician Central (West) Midlands Today 15 January 2021 1:07pm
Inspector Sands posted:

*wasn't the girlfriend of one of the contestants related to Jenson Button? Think I was on the coach with her on the way there but IIRC he got kicked off so didn't come back with us


Almost - one of the contestants *was* Jenson Button’s girlfriend! Presumably you’re remembering a coach ride with one of her relatives?

*wasn't the girlfriend of one of the contestants related to Jenson Button? Think I was on the coach with her on the way there but IIRC he got kicked off so didn't come back with us


Almost - one of the contestants *was* Jenson Button’s girlfriend! Presumably you’re remembering a coach ride with one of her relatives?

Ahh yes I think it was, or some of his. Always amused me when I saw the oversized name badges the families had to wear: 'Louise's Auntie'

That was the big publicity angle of that series, but she didn't last that long. Seems she did pretty well after the series but as an actor rather than a singer
DI
digipal 15 January 2021 5:31pm
Oh I used to love the fame academy red button. Two of the best series one bits were...

- Carrie Grant ripping into all the contestants the morning after the first live Friday show. They all thought they'd done great and she basically told them all they were an embarrassment. It was fantastic to watch LOL
- Maria Carey coming to the academy to give the contestants a masterclass. Wearing dark glasses indoors at night, with numerous assistants running around her, she hardly allowed anyone to sing a note before stopping them. It was a lesson in pure diva gloriousness

Sinead Quinn was robbed of the series one title!