The place to discuss everything US election related.

Previous Next
UN
Universal_r Recently warned Central Reporting Scotland 6 November 2020 9:31pm
I have to say I’ve been pretty impressed with bbc news’ coverage today it’s been double headed for the majority of the evening, a lot of on the ground reporting which is good. It would be even better if we don’t go to standard bulletins overnight.
BK
bkman1990 UTV Newsline 6 November 2020 10:08pm
Here is a small sample of the RTÉ US Election 2020 graphics on twitter.

Our Washington Correspondent Brian O'Donovan has the latest on the #ElectionNight. Keep up to date with our live blog throughout the night https://t.co/AWRvobM7zO pic.twitter.com/fCw8WrwBwn

TM
TMD_24 Anglia (East) Look East 6 November 2020 11:00pm
Annnd Wolf Blitzer is now back on at 6pm US time!
Does Graham Norton have Norton Security installed on his computer?
BK
bkman1990 UTV Newsline 7 November 2020 4:25am
And Chris Cuomo & Don Lemon have now appeared for their shift on CNN earlier than expected. I thought they weren't out until 5am.
DA
Dave Founding member World News 7 November 2020 6:26am
Sky need to stop the endless loop of state declarations - it’s just really distracting having it swiping on screen every 10 seconds.

It’s like somebody has a PowerPoint presentation and selected fly in and apply to all for slide transitions.

Multiple reports claim if Trump loses, he is considering launching a "Trump TV" to fight Fox News, and plans to take Sean Hannity, Tucker Carlson, Laura Ingraham and others with him.


There were multiple reports of that before the election in 2016, in fact I think there was even an advert in newspapers recruiting staff for it.

There is a persistent theory that Trump TV was part of the Plan A last time round - that he didn't want to be president and instead was using the election campaign to whip up a following and therefore an audience for it plus other ventures.
It kind of makes sense - he'd have a nice little earner and influence and people to listen to him, without the responsibility of president. However it's a long and expensive, and risky way to do it.


As for Trump TV in 2021, there's obviously an audience for it, but of course it's success depends on what happens to him. It would need some financial backing, and I guess it'll be interesting to see what happens in the next 2 months and who will start to distance themselves from him
UT
UTVLifer Yorkshire Look North (Yorkshire) 7 November 2020 8:19am
Kay Burley is presenting the breakfast show on a weekend. Is there anyone in London?

Markymark Meridian (Thames Valley) South Today 7 November 2020 8:37am
UTVLifer posted:
Kay Burley is presenting the breakfast show on a weekend. Is there anyone in London?

DVB Cornwall West Country (West) Spotlight 7 November 2020 1:02pm
CNN appearing to be ready to call the Election in the 9am EDT hour (1400 GMT) following latest batch of Pennsylvania ballots due shortly after 9am EDT. 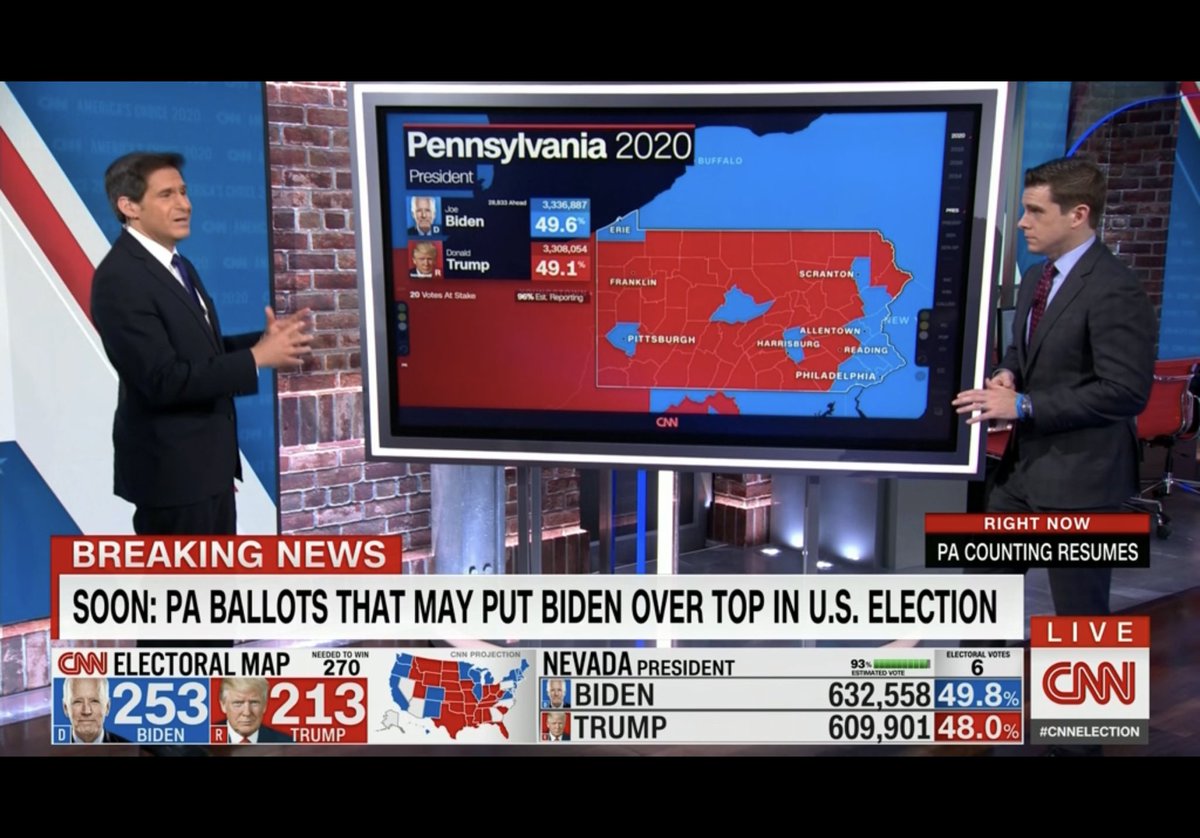 Last edited by DVB Cornwall on 7 November 2020 1:11pm
MA
mark Founding member London London 7 November 2020 1:32pm
As well as the regular New Day team being on CNN today, there's a rare Saturday edition of Morning Joe on MSNBC.
JK
JKDerry UTV Newsline 7 November 2020 1:37pm
CNN must have had a huge boost with this election? Does anyone know how well they have done ratings wise in the states?
UT
UTVLifer Yorkshire Look North (Yorkshire) 7 November 2020 1:49pm
Is it fair to say the UK Broadcasters didn't foresee the election coverage needing to continue this far on from election night itself - Sky are back with their normal music and on the balcony overlooking Capitol Hill, quite a few of the ITV News/ITN people are coming back or have already and Emily Maitlis said on Americast that she's coming back even though there hasn't been a result yet...

At least the BBC has the likes of Katty Kay, Jane O'Brien and Laura Trevelyan based out in the states and that it looks like Sky News' teams will stay until a result, given that every presenter/producer/correspondent for all the broadcasters will have to do the 2 weeks quarantine upon their return.

I wonder who'll be presenting ITV News at Ten as Tom, Julie and Rageh will all be in isolation for 14 days plus Ranvir's doing GMB and SCD?
Last edited by UTVLifer on 22 November 2020 9:41pm - 2 times in total