This site closed in March 2021 and is now a read-only archive
Previous Next
TW
twolf 27 August 2020 7:02pm
JAS84 posted:
After ARD and ZDF, the other main channels in Germany are 3sat, ProSeiben, and RTL, right?


Well remembered, although its not 3Sat, but Sat.1 that is the other main channel plus also Vox (3Sat is a 'best of' cultural channel to show off the best of germany worldwide that nobody in germany really watches)

But, because Germany does not have fixed mandated EPG system like the UK, everybody basically just does as he likes. From what I've seen after the big five most people have like the first wave of multichannels, like VOX, RTL2 or KabelEins and now also One (ARD) and zdf_neo, then the regional 3rd channels as one big block starting with their own local one.

The cooperation between ARD and ZDF still, especially in the daytime, stems from the time when it was deemed that not enough people are watching at this time of day to warrant two seperate programs. Nowdays they share resources mostly on the basis of cost cutting, or at least trying to look like they are cost cutting. At recent bigger events, like the World Cup or the Olympics, they also started to share studio facilities, even when they are hosting from Germany, like they did at the last Olympics and World Cup. With one central "Olympic-Studio" or "World Cup Studio" they both share, only on screen personell is changed. Which I think is a shame because ZDF especially was known for their huge outside broadcast studios for the WC or Euros. Like in 2008 when they turned the Festspielhaus Bregenz in Austria, that huge open air opera house where they also shot 007 Quantum of Solace, into their studio.
https://www.kongresskultur.com/m/wir-schalten-nach-bregenz

They both have a "we against the rest" image and are commonly refered to as "Die öffentlich-rechlichen" (after their corporate form) or short "Die Öffentlichen" ("The publics") and are often thought of as one entity by the public.
JA
JAS84 28 August 2020 12:48am
That's odd. I would've expected ProSeiben to the channel 7 on the EPG, as it's name literally means Programme Seven.
NT
Night Thoughts 28 August 2020 1:21am
Had always wondered about the links between ARD and ZDF - says a lot about Germany that they've both survived as separate institutions.

Always been quite taken by the austere presentation of the main ARD news, Tagesschau. Slightly surprised to see the presenters smiling these days. Is there a significance to the chime at the beginning?

The chime also pops up on early ZDF bulletins, where they jazzed it up a bit. Some of those 70s ones make it look like the newsreader's been exiled to some grimy corner of the studio.

MI
mici0123 28 August 2020 8:11am
Back when Prosieben started the probably expected to be on 7, but again because there is no real EPG numbering it just sorta happended.

The Tagesschau-Chime originally was there to indicate top of the hour (like the GMT pips on BBC radio). But now it's pretty much part of their brand, together with the opening music. You play that chime to any German and they will instantly recognise where it's from. And yeah, they tried to freshen up their image a little bit the last few years. When they got their new studio and started doing these explaning bits it actually made headlines in the tabloids that you could see the presenters legs

ZDF dropped the Chime because it was seen as just copying ARD, thier acoustic mark of recognition is those newsticker pips before TOTH.
TW
twolf 28 August 2020 9:13am
thegeek posted:

bilky asko posted:
How many seconds will it take for that very shiny plinth under the desk to be not so shiny any more?
Perhaps a stagehand polishes the floor after the hosts have taken their seats.


I found another image which suggests the presenters haven't quite worked out what to do with their feet either, as this looks an awkward pose! 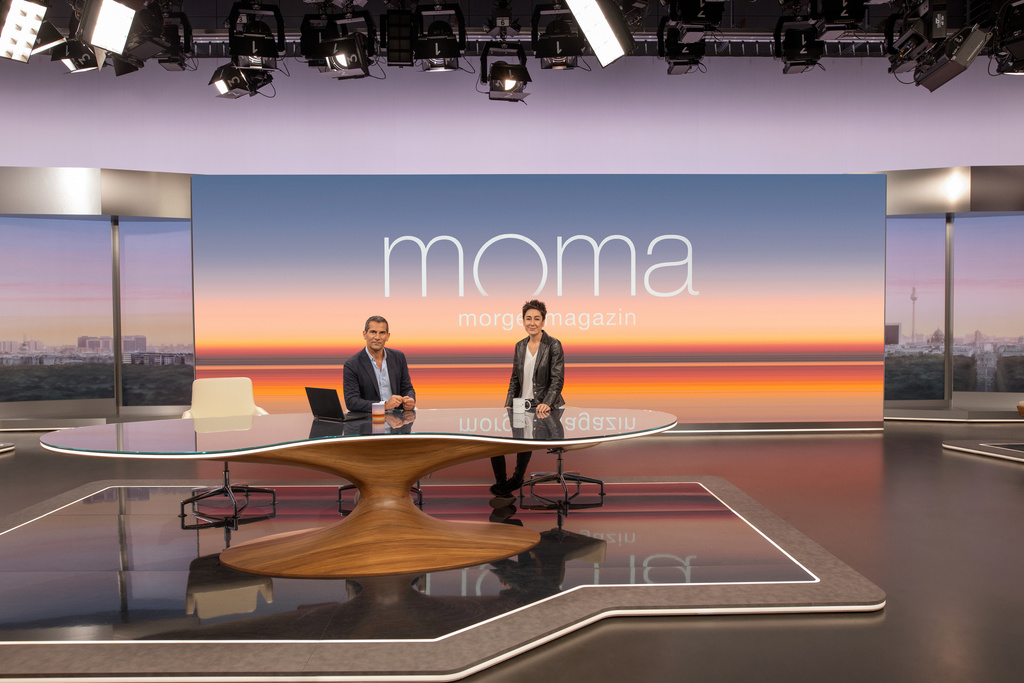 ZDF dropped the Chime because it was seen as just copying ARD, thier acoustic mark of recognition is those newsticker pips before TOTH.

.
JA
james-2001 28 August 2020 10:39am
Speaking of morse code, watching old Tagesschaus and I've noticed until 1993, the weather forecast ended with morse code (or something that sounded like it), anyone know why?
RD
rdd Founding member 28 August 2020 10:47am
Presumably when you say “no real EPG numbering” you mean for people watching on FTA satellite (which I know has very high penetration in Germany). I presume pay TV companies (Sky and Vodafone/Kabel Deutschland) do enforce EPG numbering?
NJ
Neil Jones Founding member 28 August 2020 10:54am
Back in the days of Sky Analogue when services came from 19.2° East, this was shared with a lot of German broadcasts, which the Sky boxes could receive quite easily, what with being in the same place in the sky and everything.

Does German TV still use 19.2° East?
JA
james-2001 28 August 2020 10:55am
Yes it does.
MA
Markymark 28 August 2020 10:57am
Neil Jones posted:
Back in the days of Sky Analogue when services came from 19.2° East, this was shared with a lot of German broadcasts, which the Sky boxes could receive quite easily, what with being in the same place in the sky and everything.


Yep. It's pretty much the de-facto position for all European DTH satellite (we're the odd balls using 28.2)